“Harpoon” aims to deliver something different, with a smart script and a small but compelling cast, and it excels at hitting its target. 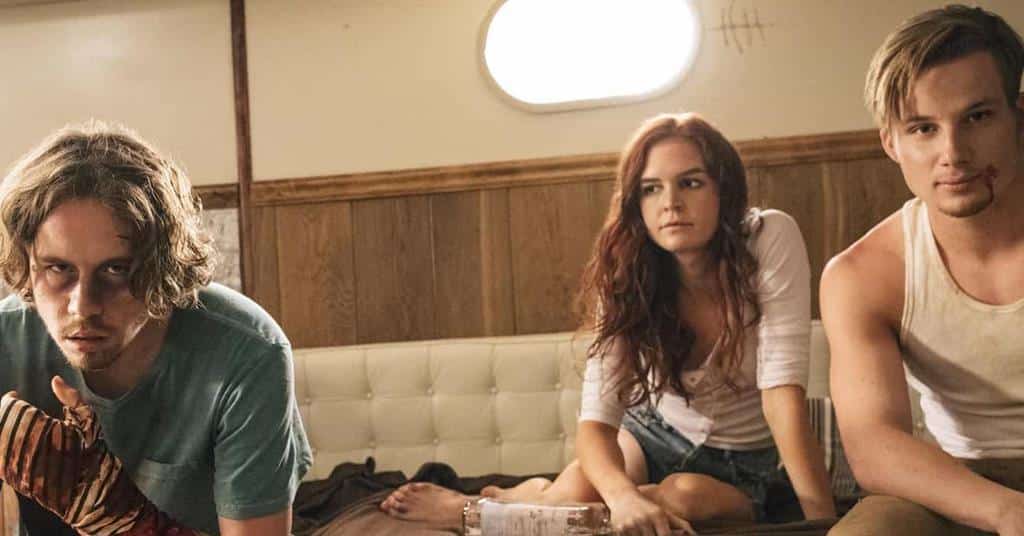 Today on Mike Fest… Flanagan Film Review… Mike’s infinite playlist… we continue our exploration of suggestions by filmmaker Mike Flanagan with Harpoon by Writer/Director Rob Grant, who steps out from behind his editorial rig to prove just how crammed with talent the film industry is. All you need is a chance.

SPOILERS lie ahead, as this one was too much fun not to fully dissect.

We’re led through this journey by a narrator (Brett Gelman, notable for his comedy roles and as Murray Bauman in the monstrous Netflix series Stranger Things), who lays down some philosophical knowledge for us in the form of Aristotle’s three types of friendship: utility, pleasure, and good.

I will bow to this angle and structure the review as such. 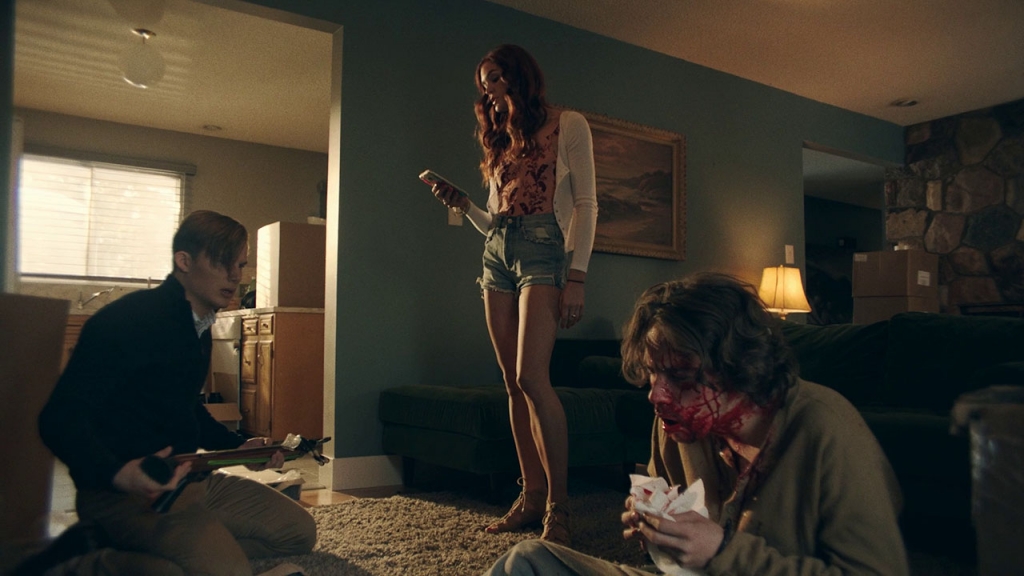 The structure and pacing of the film are mutually beneficial for the filmmaker and viewer. There are only three characters to track (eight if you count those spoken about but who remain off-camera).

You’ve got your archetypes:

1. There’s the timid loser, Jonah, for whom the film builds sympathy by killing his parents in a serendipitous tragedy and then pouring salt on the wound by having him robbed by a prostitute pre-coital. He’s pathetic and benign.

2. We have the rich jock, Richard, who looks a bit like Gronk and acts with all the aggression and testosterone you would expect from his character. His hot head is inherited from his violent father.  He’s insecure, but keeps that hidden, and takes it out on his best friend Jonah’s face when he suspects Jonah has slept with his girlfriend.

3. That, of course, brings us to the beautiful girlfriend, Sasha. She’s underappreciated by Richard, her boyfriend, and held on a pedestal by Jonah. She’s clever and not a pushover.

Besides knowing about Jonah’s dead parents, Richard’s violent father, and now deceased pregnant ex-flame whom he cheated on Sasha with, we don’t need to think about anyone else.

We also have a timeline set for us. Once we’re on the boat and all the pleasantries of betrayal and revenge are out of the way, we know how far the light is at the end of the tunnel: one week. They have no food or water. And without some divine intervention, it’s stated they won’t last longer than a week. Wonderful mechanics and setup that gets us ready for what comes next. 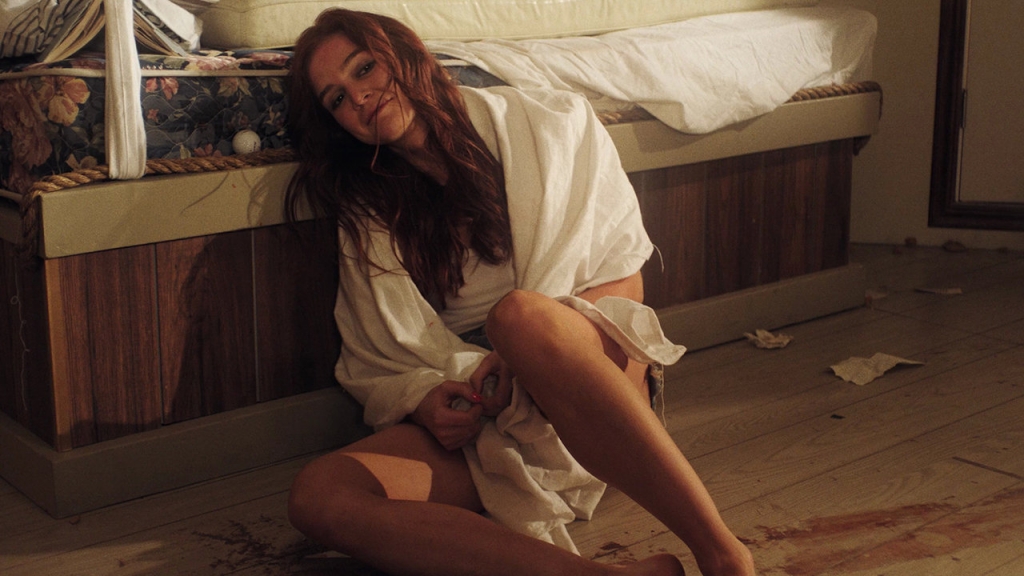 This is the fun part.

The titular harpoon — a birthday gift for Richard from his best friend and girlfriend, one whose proper name they argue over —  is fired within the first twenty minutes. Usually, the rule goes you show “the gun” in the first act and “fire it” in the third act. So what gives? Why would they blow it so quickly?

Stick with me. I’ll explain the deft writing later on.

So Jonah’s got a hand-wound, Richard’s found out his suspicions were correct, and Sasha weathers the storm of jealousy and infatuation.

Once all the possible weapons have been expunged from the boat, and it’s established we don’t have enough food or water to survive a boat that won’t start, an appropriate jump is made five days later. Our love triangle is a little tired, a lot hungry, and extremely salty. This breakdown leads to a great homage to the Jaws Galley scene by replacing trading scars and the stories behind them with sexual prowess. Richard inquires since Sasha has slept with both of them, who’s better? The circle of honesty turns into confessions of quirks such as odd faces, inept style, and revolting perspiration.

This scene and the quick rundown of sailors’ superstitions make the belly of this beast really fun. And the Poe connection with Richard Parker and drinking the blood of a turtle? Brilliance in an unexpected forum. 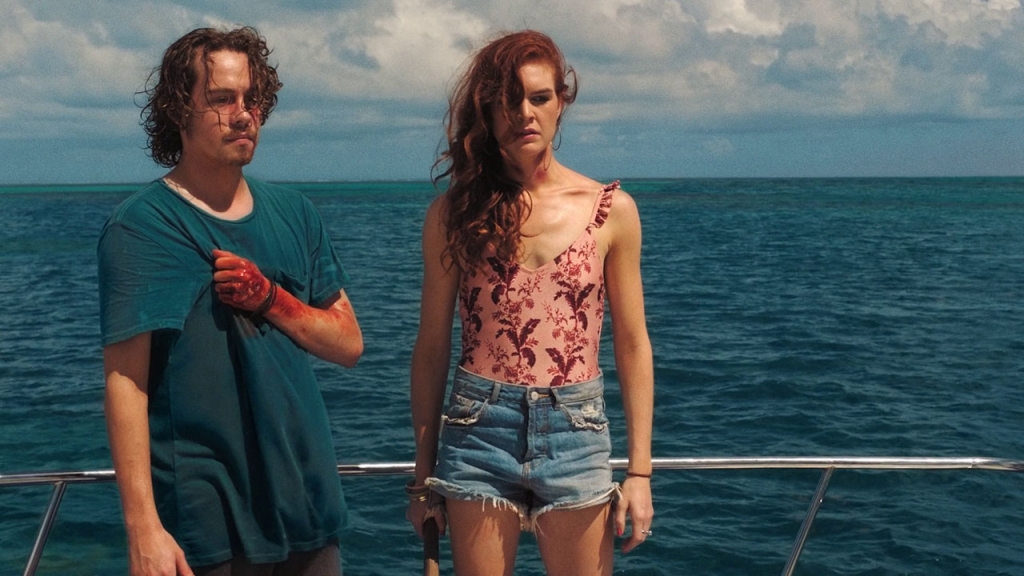 This one is supposed to be based on mutual respect and admiration.

This is exactly what Grant has for you, the viewer. Every promise laid out in the script is followed through on. He doesn’t tell us about Richard Parker just for a cool segment and an ode to Poe. He does it to set up what’s to come. It’s more than a foreshadow; it’s a blueprint. And he delivers on that structure with his own twist.

The first act “gun” we spoke of earlier?

It wasn’t the harpoon but Sasha’s endowment of strength in her punch. Richard states she packs a wallop early on, and in the third act, she fires that gun and knocks Jonah right off the back of the boat. Promise kept.

There is plenty of blood to satiate