Seeing Nic Cage unhinged has never been more satisfying than it is in the brutal, dark comedy “Mom and Dad” about bored parents going crazy in suburbia. 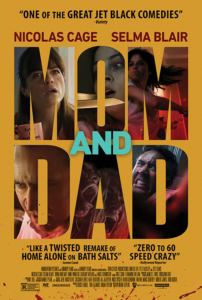 In this insane film, we find ourselves in a world where, for 24 crazy hours, there is a mass hysteria worldwide, causing parents to turn homicidal towards their own children.

The thought that has crossed all parents’ brains at least once about our sweet little darlings — “I’m gonna kill you!” — comes violently to life in Mom and Dad!

I really enjoyed this wild ride into the suburbs of Anywhereville, America.

The zombie girl in me loved that, even though it’s “not quite” a zombie movie, it still fulfills some of the requirements of that horror sub-genre. It has an unexplained pandemic that creates zombie-like creatures of formally loving parents, making them one-minded, eyes glazed with the desire to murder their own children. They brought them into this world…now they will take them out.

Writer/director Brian Taylor brings us a fast paced, frenetic and hilarious movie, that takes the likes of ‘Serial Mom’ and ‘Parents’ mixed with ‘Return of the Living Dead’ and gives us ‘Mom and Dad’.

The parents both are having midlife problems — especially Brent, who secretly dreams of the days of girlfriends, breasts and his Trans Am. Kendall is empty and lonely now that her kids are growing up and don’t really need or appreciate her. Her daughter Carly is as cranky as most teens and sneaks out to meet her boyfriend Damon (Robert T. Cunningham), who dad doesn’t approve of. And the son Joshua is just a basic bratty kid.

As the seemingly normal day starts, we see on the news that something is happening all over the world, some sort of virus has taken over and mass hysteria has ensued. Parents are killing their children everywhere – a sort of Oedipus complex gone mad! Most of the kids in school are safe…for the moment. But as the media starts showing the murders happening on the news and the parents start climbing over the school walls, it’s obvious it’s just each kid for themselves.

We as parents have all felt resentment towards our kiddos, and been exasperated beyond reason, but nothing ever made us go that extra step farther. This is the place that Brian Taylor takes us — a place some parents might not like to see. But just like any other horror movie, it gives us a chance to live in a moment we would never really go to.

I don’t want to give you too much, but I have to say that what makes this movie so fun for me is the sheer crazy ass pace! The editing was fantastic. The film goes from zero to super-crazy in just moments and never stops.

When the kids realize things are going downhill fast, Carly makes her way home to protect her little brother. Unfortunately, Mom and Dad are right behind them. A huge standoff with the kids hiding in the basement brings out the worst in our murderous parents.

Nicolas Cage has never been a great favorite of mine, but this movie is so incredibly perfect for him. The crazy looks that he has down to an art, his ability to freak out and totally lose his shit on screen, has this movie seemingly made especially for him. No one could do his part better. The scene where he sings the Hokey Pokey song will stay in my head as a favorite forever.

That’s not to say the rest of the cast wasn’t great. I loved them all.

Selma Blair is underrated and was wonderful. She brought the best scenes of super dark comedy to the film. You would never expect this mom to be trying to Sawzall her own children!

Anne Winters and Zachary Arthur as the kids were terrific. Playing such straight forward horror survival against such a silly and comedic set of parents would have been a challenge.

My favorite part though, was the cameo twist at the end with the arrival of Brent’s parents, played by horror icon Lance Hendricksen and Marilyn Dodds Frank. I thought it couldn’t get funnier…but I was wrong! They were expected for dinner, but what they brought was more crazy, dark comedy.

Again, I love this movie. You have to see it! This film is bound to be a cult classic. Parent or not, you will love it too. Momentum Pictures will be releasing Mom and Dad in select Theaters, VOD, and Digital HD on January 19th.

All photos courtesy of Momentum Pictures