Nature vs. Nurture is scrutinized in this tense and disturbing psychological thriller/found footage film from writer/director Tucia Lyman. 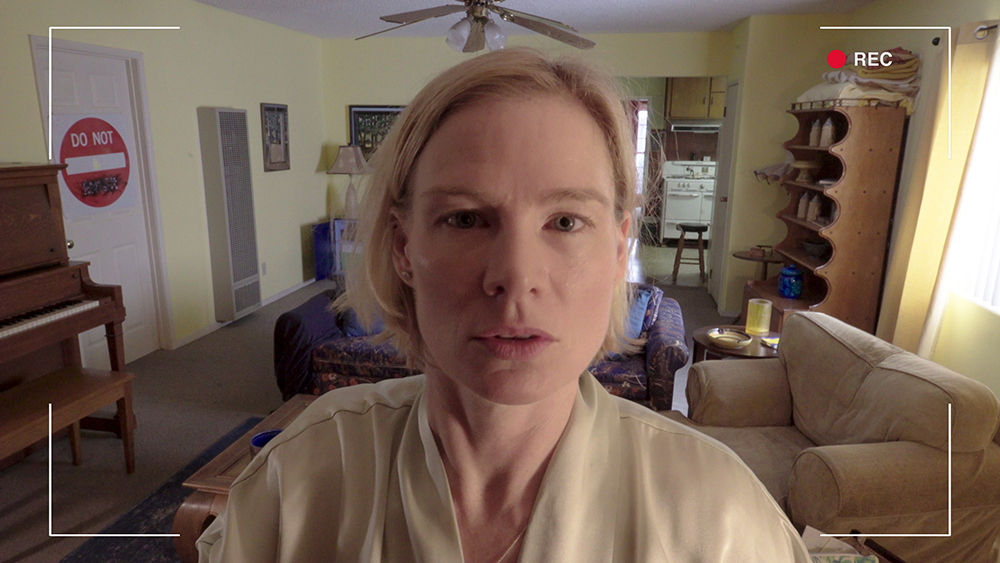 A fascinating new variant of the found-footage genre, “M.O.M (Mothers of Monsters)” takes a slow-burn look at one mother’s paranoia about her son’s behavior and her debilitating fear that he has the potential to become a serial killer.

Most parents go through a period time with their teens when they question, “What kind of kid did I raise?” I did. When my daughter turned 16, I wasn’t sure who this new, cranky, snotty kid was. Where did my happy little girl go? Luckily, as everyone assured me, she finally mellowed out, and a funny sweet woman emerged.

But it was a scary time for me while the hormones were raging, and I often questioned, “Where did I go wrong?” This is where M.O.M.(Mothers of Monsters) begins.

Synopsis: A mother suspects her son of being a psychopath and, to prevent him from committing a terrible atrocity, takes matters into her own hands. 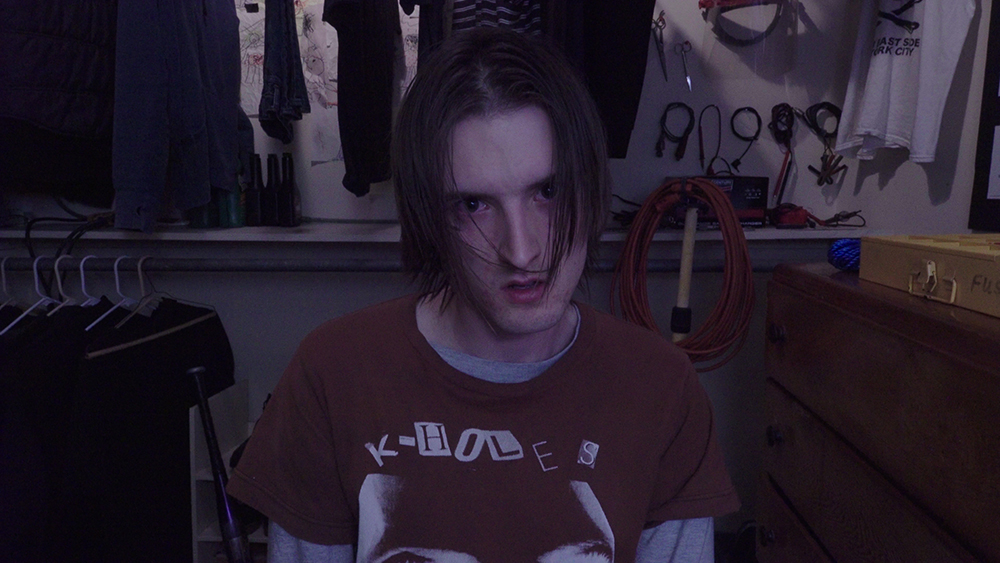 Abbey (Melinda Page Hamilton) is a divorced mom, trying to make it on her own while raising her teenaged son. Like one of my favorite films, We Need to Talk about Kevin, we meet a mother who has spent their cold, untouchable child’s whole life trying to figure them out without success.

In amongst the more recent surveillance videos Abbey is doing of her son Jacob (Bailey Edwards), we are witness to family films that show Jacob as a troubled little boy who hurts animals and other children, seemingly without remorse. He could be just a weird impulsive kid — or maybe she has raised an evil, psychopathic monster.

Abbey decides that the only way to prove there is something wrong with Jacob is to monitor and record him, so she can prove that she isn’t crazy. 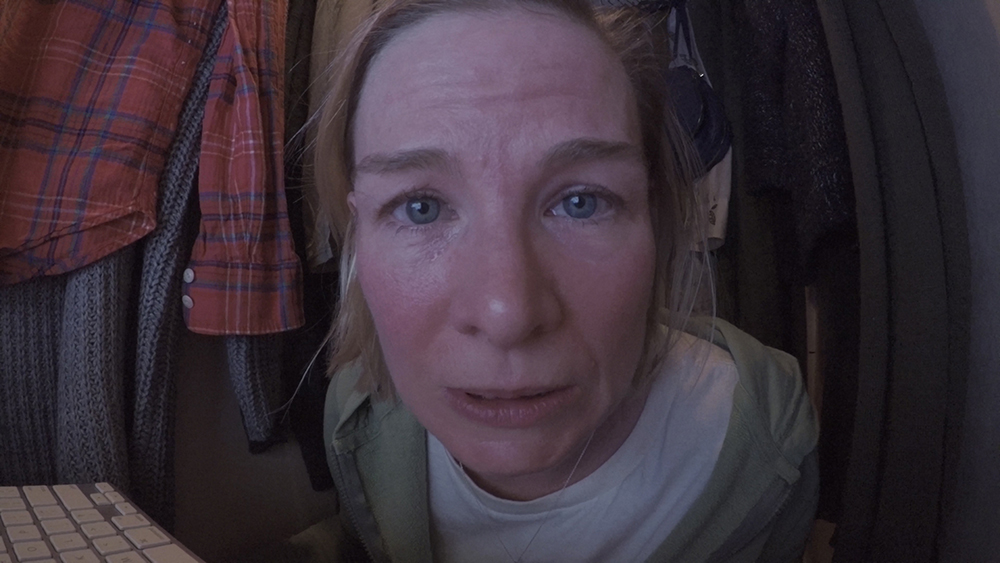 She decides to put this out on the internet for other parents, so they can learn from her mistakes. She wants to help other “M.O.M.s” — AKA “Mothers of Monsters” — out there.

After sharing her worries with a child psychologist (a wonderful cameo by Ed Asner), Abbey starts setting up cameras all over the house to watch and record Jacob. Because her paranoia has her not thinking straight, Abbey was more suspicious than careful — leaving it easy for Jacob to catch her in the act.

Her video surveillance equipment is too obvious, and she’s acting very weird. Also, in another bad move, she doesn’t lock the closet where she keeps her computer with all the videos of Jacob she has been filming since childhood. Once her plan backfires, things go bad quickly.

About two thirds of the way through, the film shifts its narrative and Jacob takes control. 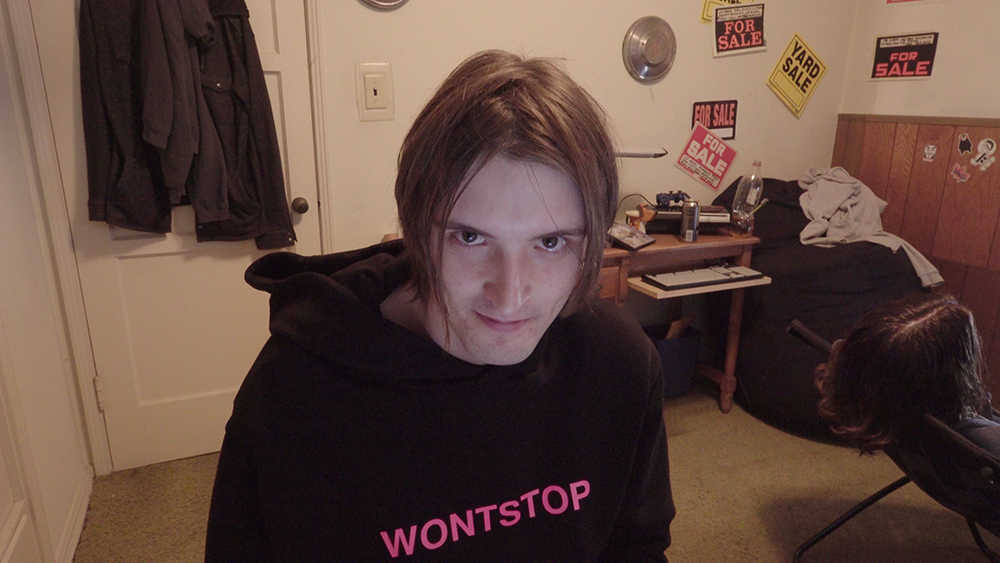 And wow, does he ever take control! He really takes revenge on Abbey big time. But it’s hard to tell if his actions are because of an over-reaction to his mother’s paranoid behavior, or if this is just what was brewing right under the surface all along.

Jacob was never presented as a sympathetic character, so honestly, he was not very likable. It already seemed like a given that he was a deeply disturbed youth with an agenda, which is what Abbey tries to show us. But it’s possible that was just Abbey’s opinion and dysfunctional view of him due to past trauma, as most of the film is told entirely from her perspective. It’s only at the end that we get a glimpse of Jacob’s point of view.

For me personally, Abbey’s neurotic behavior got annoying after a while. I would think going to the police and at least letting someone outside of the house know about his behavior could have changed the results immensely. I kept wanting her to just stop. “Jacob is gonna figure all this out” I thought, “and then how do you explain yourself?” Her agenda for Jacob seemed to be one-directional. It was as if she was saying, “I think you are a psychopath honey, so let me have you locked up to prove me right.”

Found-footage films have been done to death, but I liked this one. 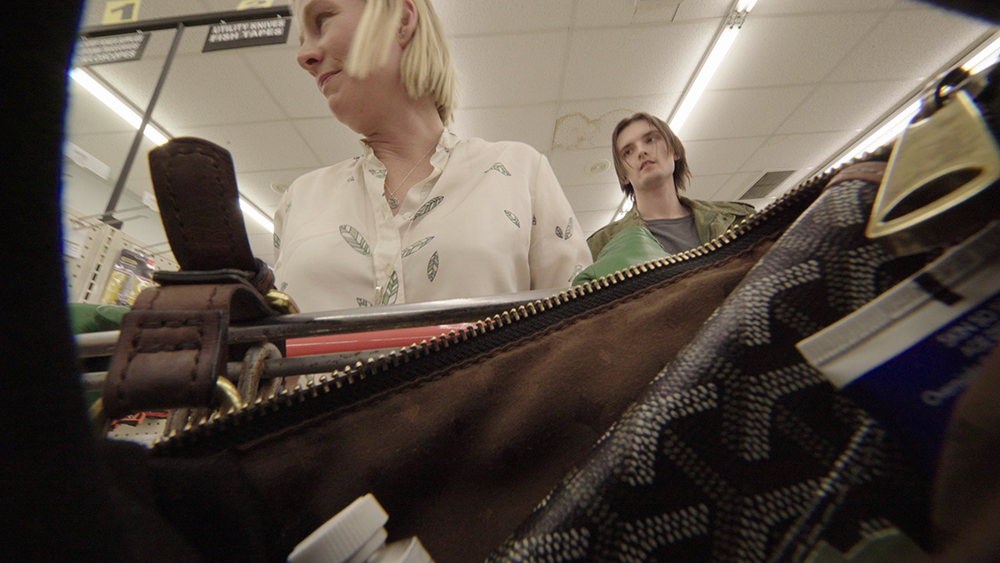 What I found interesting about this approach to the genre was how uncomfortable it made me. I was an unwilling voyeur. As Abbey’s behavior got more manic, I started to feel trapped.

Here I was, stuck at someone’s home — watching a mom and son fight, seeing the mom sneak around and secretly film her son — but I couldn’t leave. It reminded me of our human need to slow down and stare at a car accident. We don’t want to be there, but we can’t help it; our curiosity gets the better of us. I became a secret witness to all the craziness.

We find out part way through the film that there is a history of mental illness in the family, when a dark secret Abbey has kept hidden finally comes to light. She had some serious trauma in her past, and genetically there is reason to believe Jacob, or even Abbey herself, could be truly insane.

With Abbey controlling the perspective and being an unreliable narrator, the film smartly leaves you questioning what’s real. 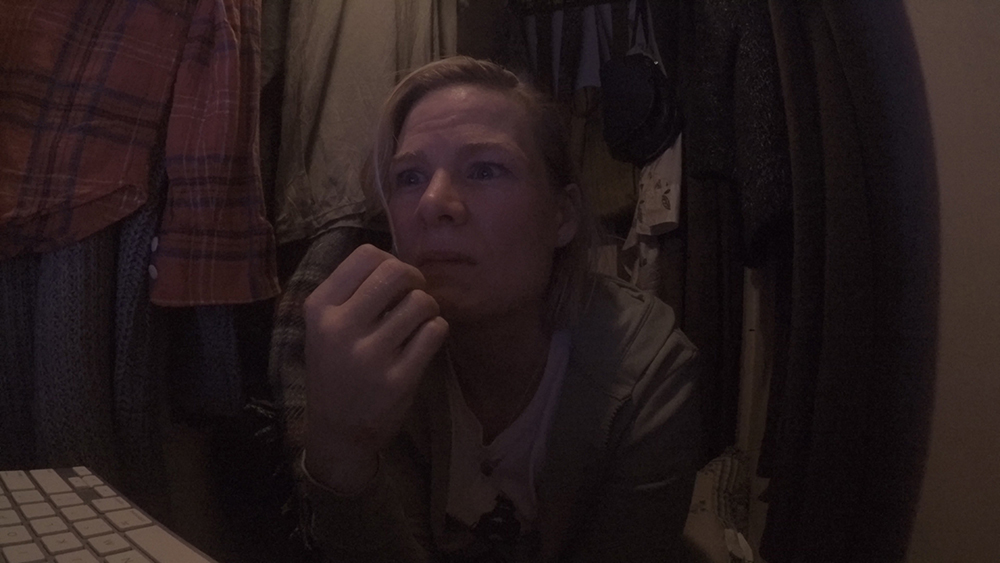 Did she simply project her fear and paranoia on to her son, Jacob, making him the object of her irrational fear? Or is he truly as much of a bad seed as she thinks? Is Abbey a sociopath herself, or has she been right about Jacob all along? Either possibility, or both at the same time, feel entirely possible.

It’s important to note that there is a lot of social commentary throughout the film, tackling issues like mental health and gun control.

It has some serious points to make about highly sensitive and relevant issues in the current political climate. This depth helps make up for some of the slower moments, like the times where we watch Abbey put up video cameras and talk into the screen of her computer — though I did also love her manic little rants!

Melinda Page Hamilton as Abbey was terrific and believable. 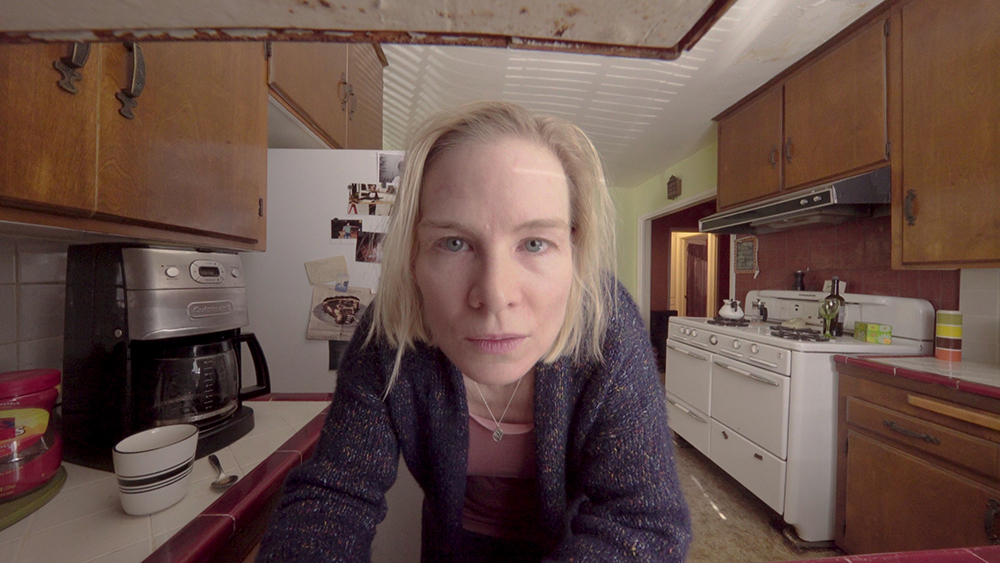 She kept me in the moment, and I loved her anxious energy throughout. She made me want to find out if Jacob was the dangerous killer she feared, or if he was just a typical teenage asshole.

I enjoyed the difference between the beginning and the end of the film. The switch from Abbey’s view to Jacob’s perspective was intriguing. Bailey Edwards was also terrific at portraying the very troubled and creepy Jacob, and I had no problem envisioning him as being the next perpetrator of school violence.

From his perspective we get to see the other side of the camera as it were and find out how he feels and what he has been thinking all along. Or do we? He could be a psychopath, right?

The finale of M.O.M. was fantastic! 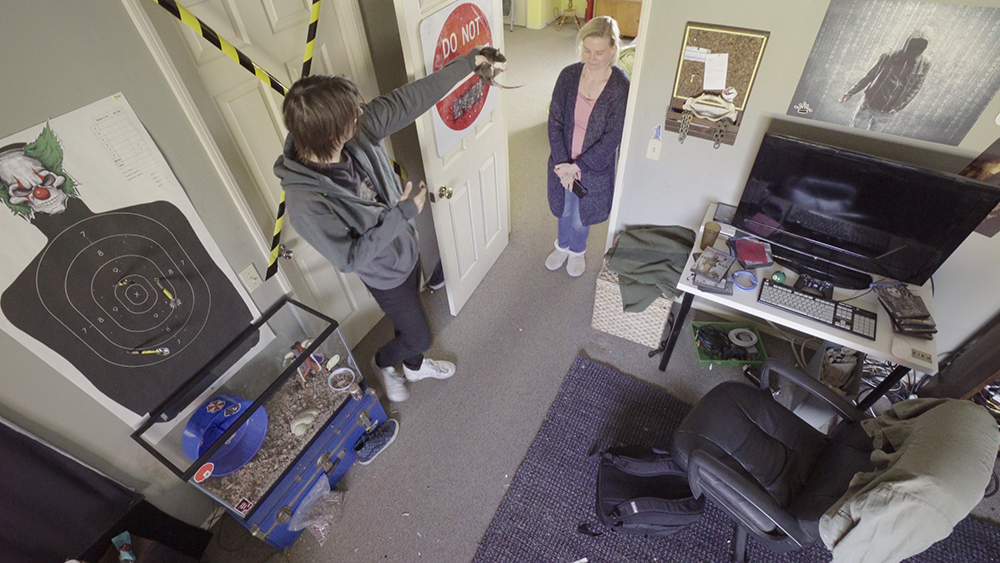 In a sense, we are left hanging. But I made my decision what was going to happen next, and I’m sure you will, too. Be sure to watch it all the way to the end. There is a little extra in there, which you could easily miss if you skip the credits.

Small Spoiler Alert: The only real downfall for me was the purposeful death of Jacob’s pets. I am not a fan of animals getting killed in films, and this time it made me very sad. I don’t think it ruins horror flicks for everyone — it didn’t destroy this film for me. But I could have done without one particular moment, which you will know when you see it. Just a “pet” peeve of mine.

Ultimately, though not a perfect film, I think M.O.M. has a great story to tell. It had an ending that surprised me, and I think it’s definitely worth a watch. This is a terrific addition to any found-footage lover’s library and a worthy psychological thriller.

M.O.M. (Mothers of Monsters) opens at the Arena Cinelounge in Los Angeles today, March 13th, with a Nationwide Digital HD rollout on cable and VOD to follow.