A slasher love letter with a focus on diversity, “Murder in the Woods” doesn’t remotely reinvent the genre, but it is both entertaining and important. 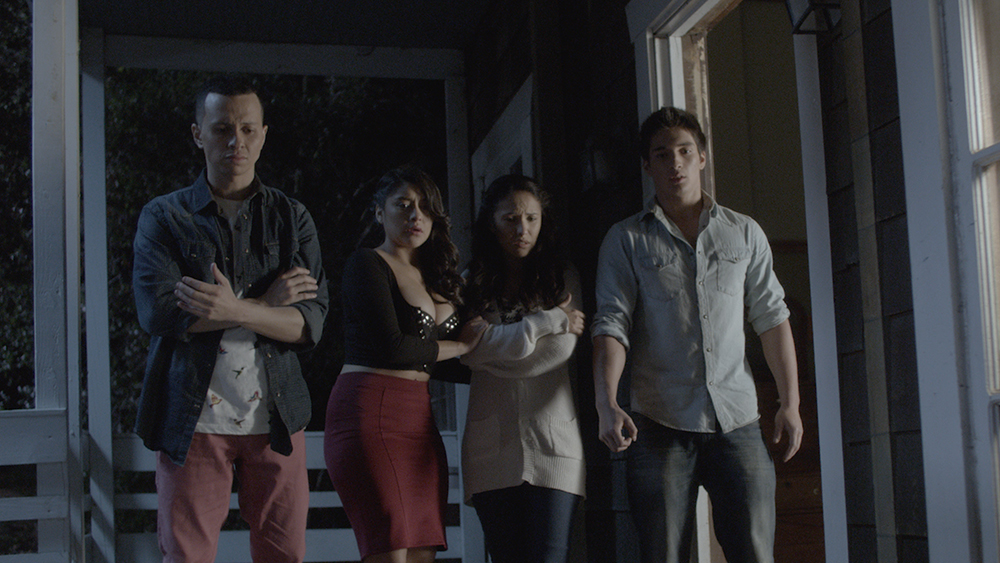 I fell in love with the idea of Murder in the Woods well before I sat down to watch the film. Directed by Luis Iga Garza and written by Yelyna De Leon, the throwback to slasher classics would have sparked my interest even if it didn’t also happen to boast an entirely Latinx cast. Throw in the promise of genre icon Danny Trejo, even if only for a cameo, and I’m sold.

I really loved what the filmmakers had to say about the concept for the film:

“I realized that this type of film had never been done in English for a mainstream audience, where Latinos and people of color are the leads and they are not portrayed in stereotypical ways,” says Director Luis Iga Garza. “This is why, while developing this indie feature, we were very conscious of making sure that there would be a diverse cast in lead roles.”

“For us, it’s important for this story to be universal, but being Mexican-American, it was also important for the script to include cultural Latino references such as El Dia de los Muertos, The Chupacabras, and other stories that are recognizable,” says writer and producer Yelyna De León. “We purposely showed authentic moments, such as the altars to honor our ancestors, and blessings when we leave the house, memorable experiences that we share with our families.”

The intent is certainly commendable. But the real question is, does it work? 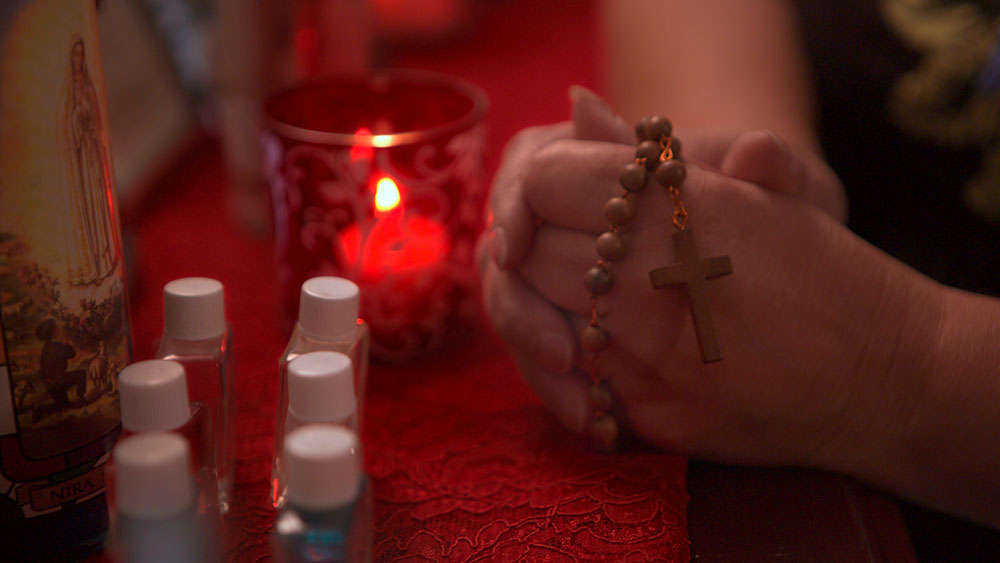 As is often the case, so much of your enjoyment of Murder in the Woods will hinge on your expectations going in. The filmmakers admirably try to do some things differently here — specifically with their commitment to representation both in front of and behind the camera.

Ultimately, however, this is a loving homage to the slasher sub-genre that gleefully embraces all the well-tread tropes of the genre. The result is a fun romp in the woods, but don’t expect anything groundbreaking or thought provoking.

At several points, the plot was silly and borderline incomprehensible. With that said, at no point was it ever boring.

From the opening scene, I was immediately drawn in. A man is running through the woods away from an unseen assailant. He’s covered in blood and badly wounded. As he runs for his life, his fear is amplified by the heart-pounding score, which matches the rhythm of his labored breathing and the crunch of leaves beneath his feet. He makes it to a home nestled just outside the woods and collapses on the ground. Suddenly, he has a brief flashback to an earlier time, standing front of the same house, looking up at a young boy staring out at him from an upstairs window.

As he tries to tend to his injured leg, a bloodstained car flips on its high beams and emerges out of the woods, chasing the man into the house. The car stops, and a man exits, dropping an axe to his side.

Cut to the title screen followed by a caption letting us know it’s the next morning.

Time to meet our cast of stereotypical slasher staples, the pretty young people who we are not really supposed to care about — and can’t wait to see die in increasingly horrific ways. 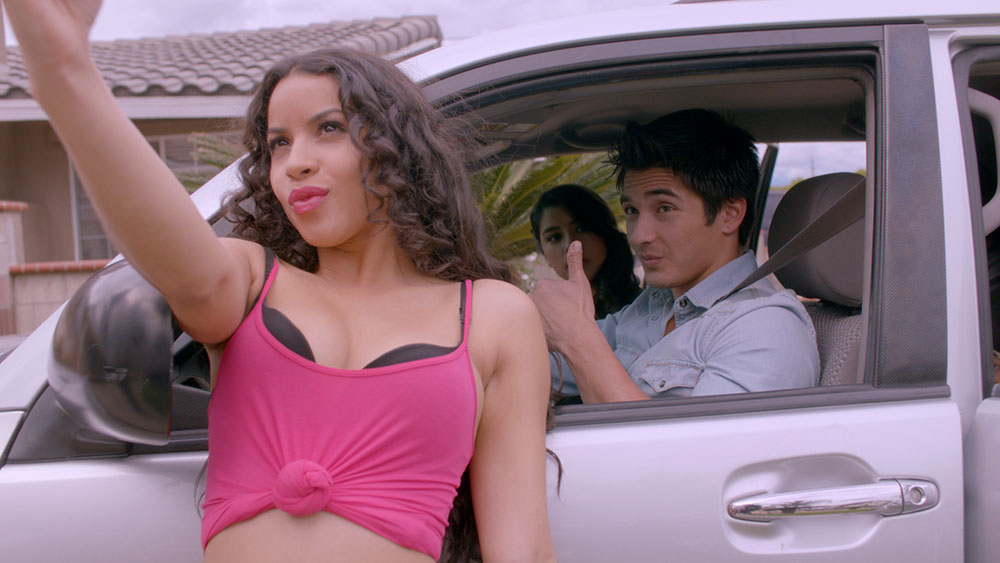 There’s Jesse (José Julián), the socially awkward teen with a tragic but mysterious past. Against the wishes of his overprotective grandmother (Soledad St. Hilaire), he’s preparing to go on a getaway with a group of friends. Grandma doesn’t like him leaving the house, especially on the anniversary of his parents’ death.

The friends are planning to celebrate the birthday of Chelsea (Chelsea Rendon). The brash and loudmouthed Chelsea has coaxed her shy, virginal cousin Fernanda (Jeanette Samano) into joining for the weekend, in the hopes she might loosen up and have a little fun. Chelsea hopes part of that fun may include Fernanda hooking up with Jesse, freeing Chelsea up to enjoy a romantic weekend with her hunky, jock boyfriend Gabe (Jordan Diambrini).

Tagging along at the last minute are the wise-cracking, class clown Jule (Kade Wise) and his date for the weekend, the narcissistic and very sexually confident Celeste (Catherine Toribio). Chelsea is not happy about Jule tagging along, and she is really not happy about the inclusion of Celeste, who she sees as competition — even before she learns that Gabe hooked up with her freshman year.

The six friends pile in an SUV and head out for a weekend camping trip at a cabin in the woods. 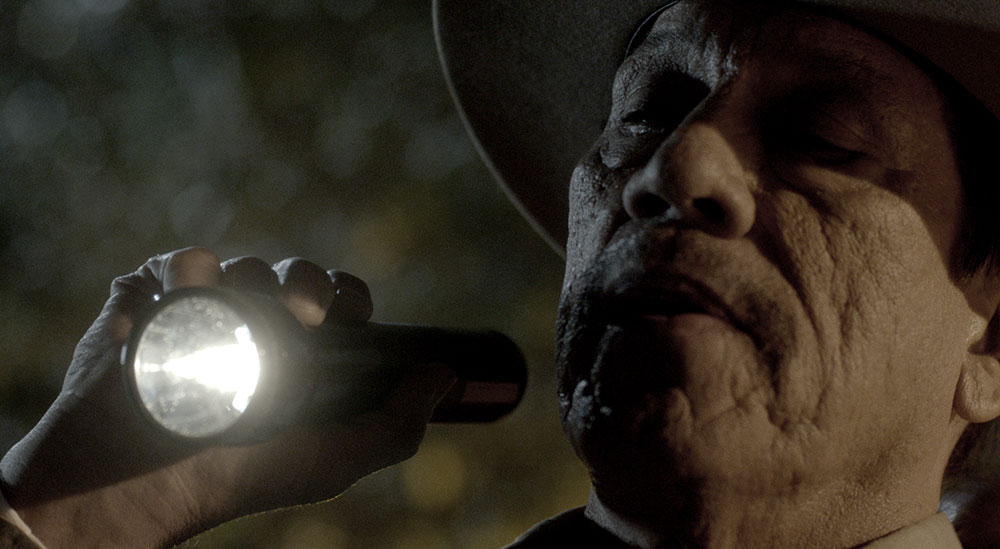 It’s not long before we get those familiar harbingers of doom, starting with an emergency broadcast over the car radio (which they ignore) and the convenient fact that there’s terrible cell phone reception in the area. As night falls, they invariably get lost (because the manly man refuses to use GPS) and end up at a seemingly abandoned gas station.

While drinking a few shots to calm their nerves, a creepy cop, Sheriff Lorenzo (the great Danny Trejo), knocks on the window and shines a flashlight in the car. He asks them where they are headed. Their response? Crystal Hill. (Just in case you were unclear about that whole slasher homage thing). He eerily warns them to be careful because… long pause… there’s “a lot of roadkill out there.”

Back on the road, they accidentally hit a dog with the car just before reaching their destination. They manage to make it to the house where they’ll be staying — the same one from the opening scene — but the car is broken down, rendering it inaccessible in the “off chance” they need to use it during the weekend.

Once inside, we get a hint of some supernatural goings-on as well as signs that a killer may be stalking them from the woods. We then dive into the requisite party scene, where the kids do just enough drugs and alcohol to make them question if unexplained events are really happening or just in their heads.

Without spoiling anything, any genre fan vaguely familiar with slasher films will immediately start making predictions about who will be the first to die and who will be the last one standing. And the filmmakers make no attempt to reinvent the slasher formula here.

This movie is about embracing tropes, not subverting them. 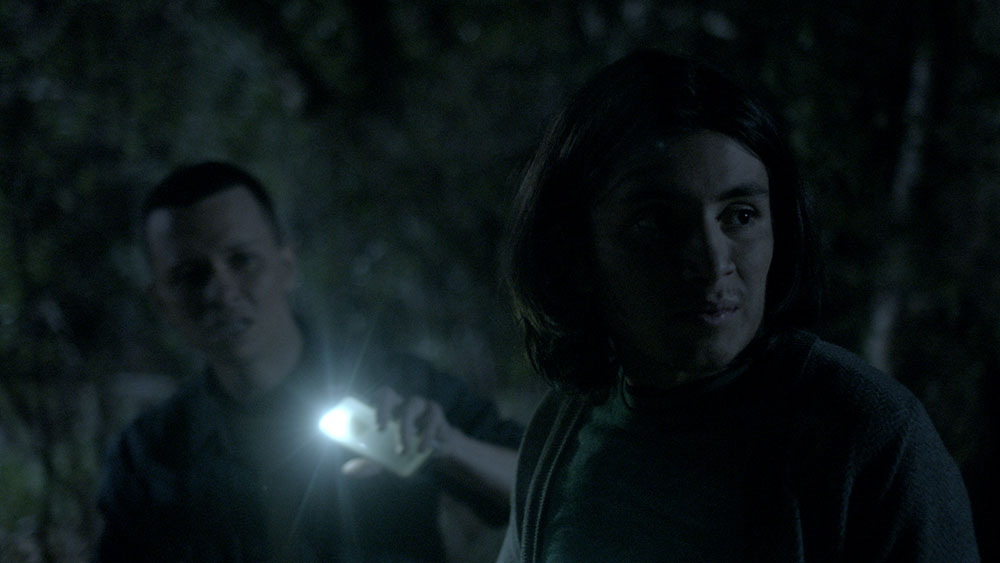 While you can expect some twists at the end, which in and of itself is a staple of the sub-genre, most of the film delivers exactly what you’d expect, pretty much exactly the way you’d expect it. And that’s not necessarily a bad thing. Because, while you’ll have a pretty good idea who is next on the chopping block at any given point, you’ll still get a kick out of seeing them die in gory, creative ways.

And trust me, it won’t take long before you’ll be eager for the bloodletting to begin.

Thankfully, to its credit, the filmmakers know why you’re here, and they don’t make you wait for the good stuff. The first kill happens right before the 30-minute mark. It happens offscreen, but don’t fret. We’re later treated to a closer look at this death in all its gruesome glory. And from here on out, the filmmakers do not shy away from giving you the kills you crave.

For the rest of the film, we get a bit of mystery, a bit of misdirection, some interesting nods to cultural myths, a fun but groan-inducing deus ex machina at a climactic point, a surprise (probably not all that surprising) twist followed by another surprise twist, and a “let’s tie all these messy pieces together” reveal that delivers some vaguely satisfying answers while leaving plenty of disconnected plot points you’ll have to be willing to just ignore.

First, let’s talk about what works.

There are plenty of well-executed jump scares. The film is well shot, with lots of creepy atmosphere. The score is excellent, and the practical effects are strong — with no shortage of gore. I also appreciated the cheeky self-aware aspects of the film and the dark humor sprinkled liberally throughout. The cast of mostly unknowns is believable and generally compelling, even if there’s no one to really root for. In fact, the un-likability of the characters is both a positive and a negative. While it kept me from investing too much in the outcome of the film, it did make those juicy death scenes that much more satisfying!

On the downside, while the diversity of the cast was exceptionally refreshing, the characters were (I believe intentionally) one-dimensional stereotypes. The dialogue was (again, perhaps intentionally) cheesy, and the plot was a convoluted mess that only partially makes sense in the final moments of the film. The devotion to honoring genre tropes is charming on one hand, but also a bit tired and uninspired on the other.

Murder in the Woods wears its genre influences proudly on its sleeve, channeling a slew of horror classics, including The Shining, Cabin in the Woods, You’re Next, Friday the 13th, Scream, and Silent Night, Deadly Night. And for the most part, this classic cocktail works if what you are craving is a bit of mindless fun. If you’re looking for something deeper, look elsewhere.

This film may be self-aware, but it’s not really meta like Cabin in the Woods or Scream. There’s no real commentary on the genre… just an affectionate slash and rehash of the tried-and-true tropes horror fans have loved for decades.

Ultimately, Murder in the Woods scores more points for what it tries to do than it what actually achieves. 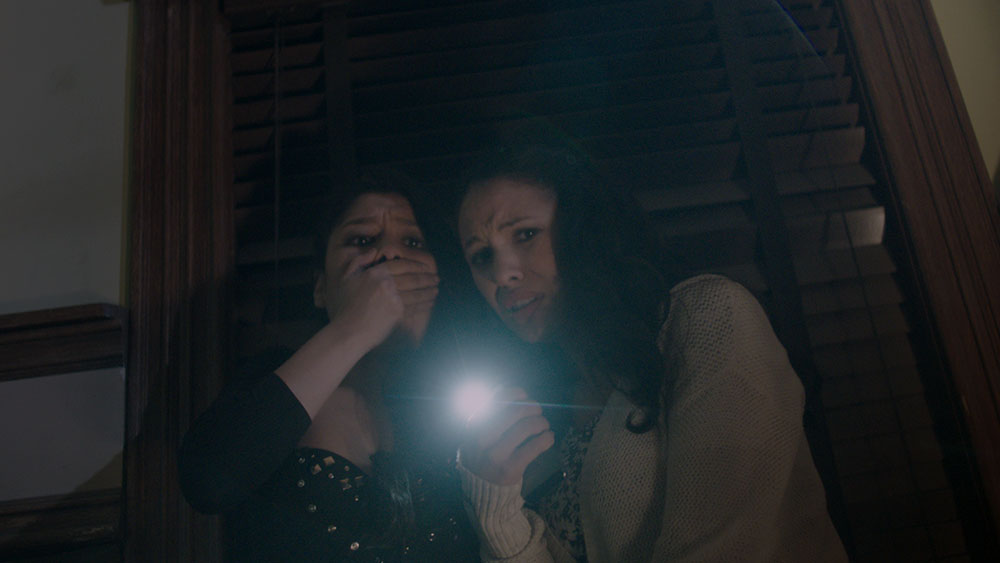 The all Latinx cast shouldn’t feel so remarkable. But, sadly, it does. And it’s great to see movies like this being made. I’d love to see this mark a growing trend towards more diverse, non-stereotypical writing and casting in the genre.

Watching a film like this is a great way to celebrate National Hispanic Heritage Month (which begins today, September 15th). And, despite all its flaws, it also happens to be a damn good time.

Murder in the Woods is now available at drive-ins and theaters nationwide and will arrive on VOD on September 18th.

Stephanie Malone (The Angry Princess) is the founder, owner, and editor-in-chief for Morbidly Beautiful. She's a film and indie lover, writer, artist, illustrator, producer, Marketing/Creative Director, and obsessive lover of all things horror. She's also the co-host of the Cheer