Beautifully shot and violent beyond belief, Jennifer Kent’s “The Nightingale” will leave you shocked and deeply invested in the main character’s plight. 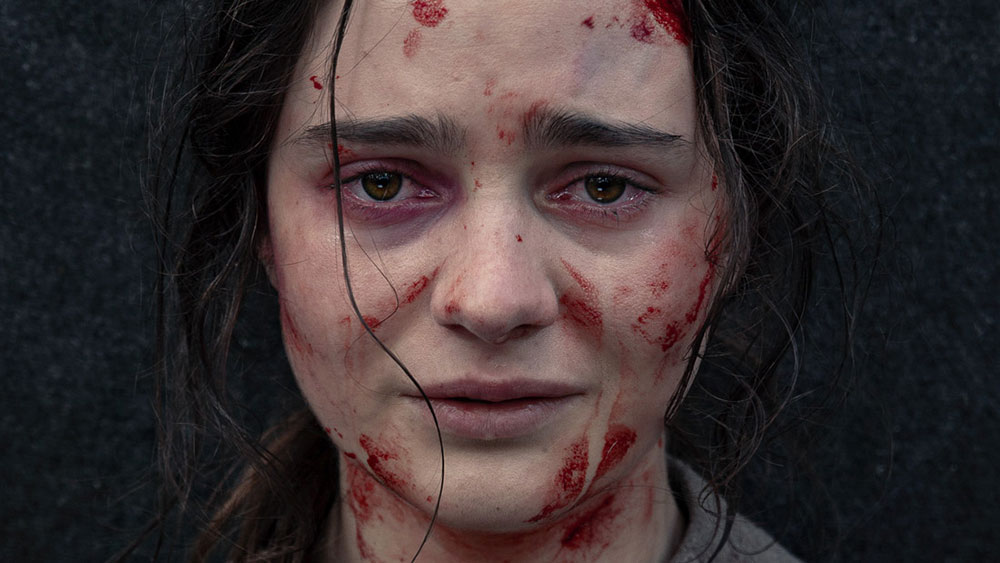 As disturbing and difficult as it is to watch, Jennifer Kent’s The Nightingale is a significant film. In 2014, her debut film The Babadook took horror audiences by storm with its titular supernatural intruder, a metaphoric tale of insomnia, grief and what it’s like to be a single parent with a problematic child. Her new film is a bit more grown up (yes that’s an understatement) and the horrors are unfortunately terribly real.

The savagery shown in The Nightingale includes merciless examples of the inhuman exploitation that is colonialism. Filled to the brim with scenes of rape, murder, theft and genocide, this is a film that has left audiences traumatized and unable to stay till the end.

Sexual assault is difficult to present without causing an uproar, and this film will be impossible for some people to watch. Does that mean it’s not a story to be told? No. I am one that has trouble watching rape, but I made it all the way through the film — and am glad I did. I will not forget this film. 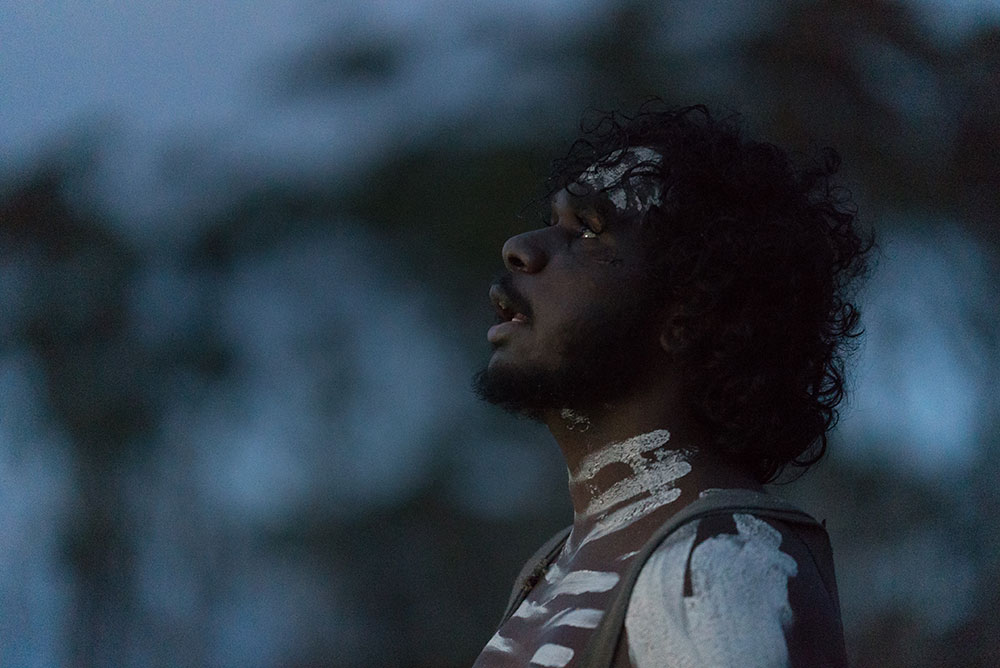 There is a righteous anger in the characters that can’t be denied.

Even the antagonist was angry at his situation. Not that this makes him sympathetic in any way. One country storming in and taking over another country is ugly at best. It is the dirty secret of every territory colonized that no one likes talking about. The subjugation — raping and pillaging natives, while just taking what they please — is a universal story that’s the unfortunate basis of every civilization’s history.

The Nightingale is the story of Clare (Aisling Franciosi) a young Irish girl who after serving time in prison is brought to a British colony in the Tasmanian wilderness by the cruel Lieutenant Hawkins (Sam Claflin) to work for him and pay off the rest of her bondage. Lt. Hawkins keeps her imprisoned as his personal slave, years beyond the time he was supposed to have her working for him.

Both Clare and her husband need her to get official papers to show her freedom, so they can move on with their lives along with their baby. Hawkins thinks he is superior in all ways to the likes of Clare and her husband, so there is no way for this to go well. The film gets to the point quickly, when Hawkins brutally assaults Clare after showing her off to his disgusting men by having her dress up and sing for them. 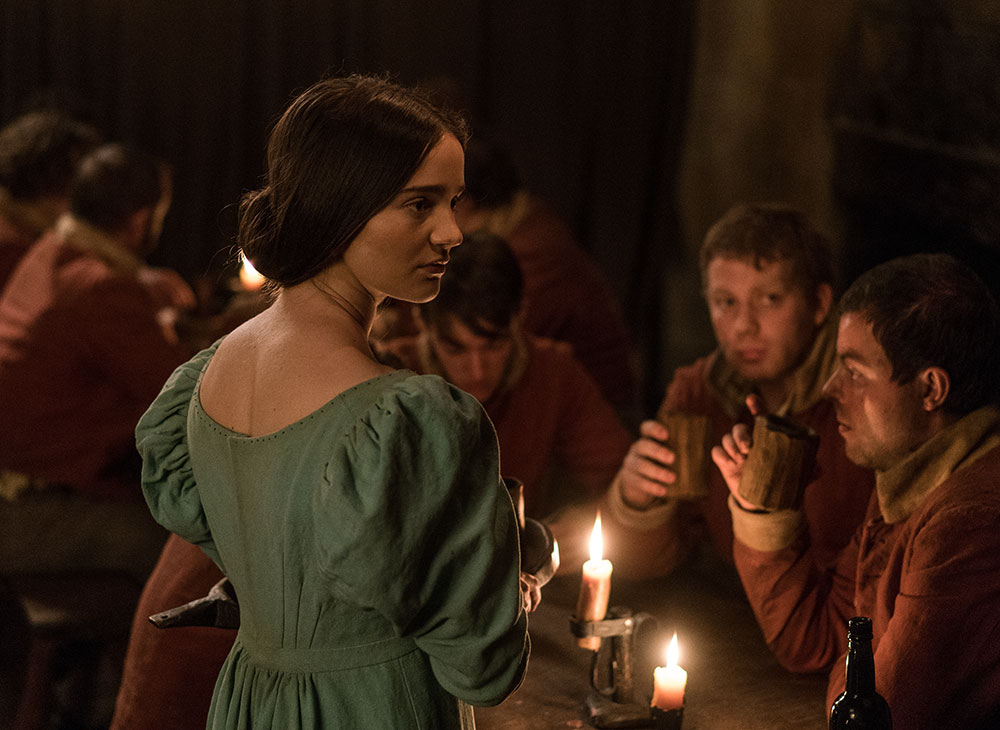 A shot of the ceiling, from the prospective of Clare during the attack, says it all. Her life is horrible, but Clare tries to keep the worst of it from her husband. He does see the signs though and goes to the Lt. Hawkins to demand that he free his wife. Having realized he made a grievous mistake, Clare and her husband start packing, ready to flee.

Hawkins and his men show up and catch them trying to leave. Everything about this moment in time goes horribly wrong, and Clare is left destroyed and alone. After this incident with the soldiers that is straight out of a nightmare, Clare becomes a rage-filled animal, with no other thought in her head but revenge.

I honestly think I stopped breathing for a time, during that scene. I got so caught up and shocked watching the real-life horror, that I was totally sucked into the moment. 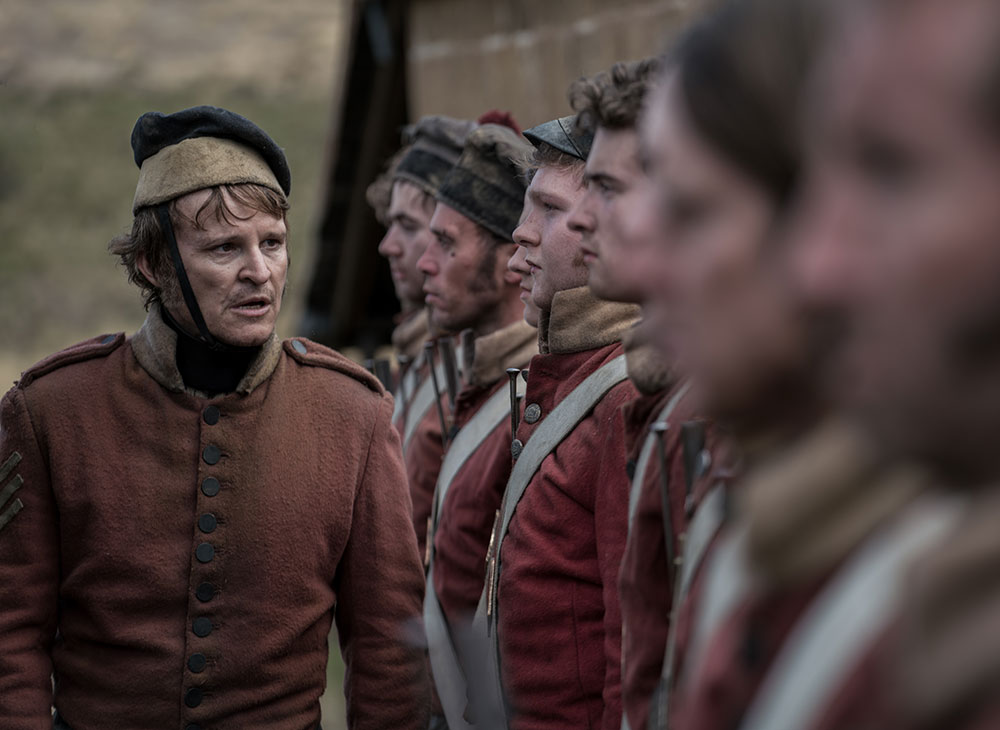 If this violence and evil had not seemed fully intentional, and unfortunately historical, I don’t think I could have watched anymore.

Movies like I Spit on Your Grave are purely exploitational, and I cannot handle them. But in The Nightingale, the violence is so purposeful, so directly in our faces, I got caught up in the plight of this hardworking young woman and whole-heartedly supported her desire to retaliate. I needed her to; I wanted to see these sadistic monsters die.

In the director’s statement Kent says, “I wanted to tell a story about violence. In particular, the fallout of violence from a feminine perspective.”

Once she comes to from the attack, Clare takes off to find her vicious perpetrators; she will be avenged. 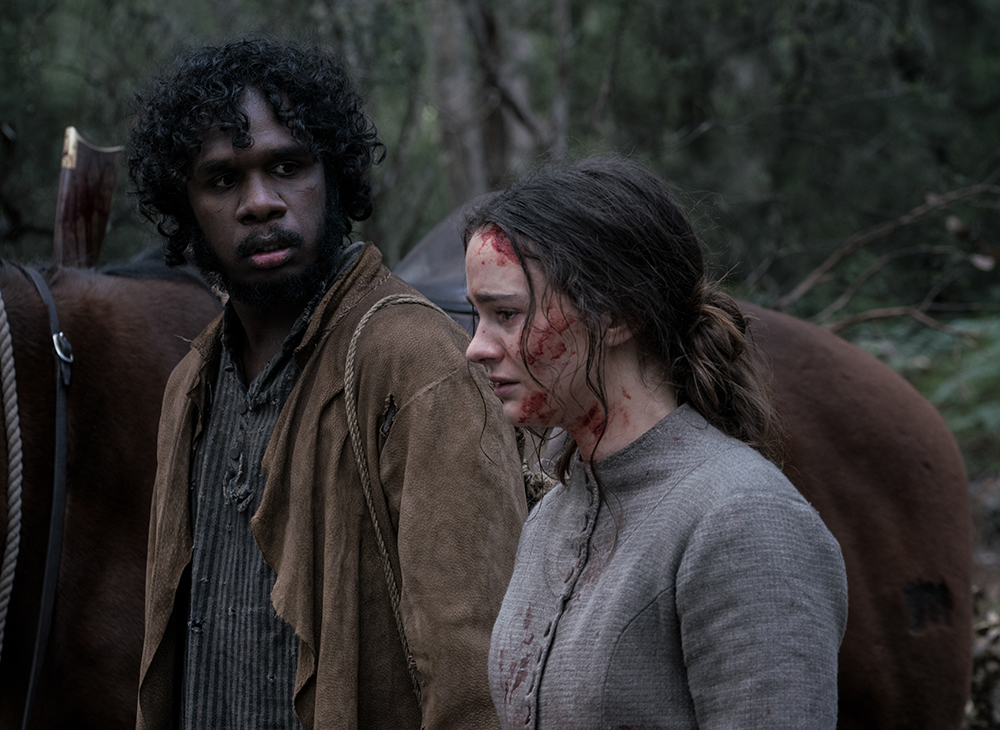 She has the desire, but the real hero of this story is the guy she meets on the road to revenge.

Clare needs help to find the Lt. and his men. She doesn’t know how to track anyone, and it’s dangerous to be a white woman wandering around the outback. She hires an Aboriginal native to be her guide and track the soldiers. Billy (Baykali Ganambarr) is just as bitter and enraged as Clare. His country has been destroyed and taken over by the British, and he is one of the few left alive. The soldiers are slowly but surely killing them all off as they build their new colony.

Clare started out as racist as any of the other colonists against the natives. I always find it hard to understand why colonists would be surprised that natives who are being systematically destroyed are angry and dangerous to them. Of course they are! But Clare was an indentured servant from Ireland and hated the British, too. That shared hate eventually brings the two together as unlikely allies. Watching them grow to trust each other and work as a team was superb!

So why could I get through such an intense film? 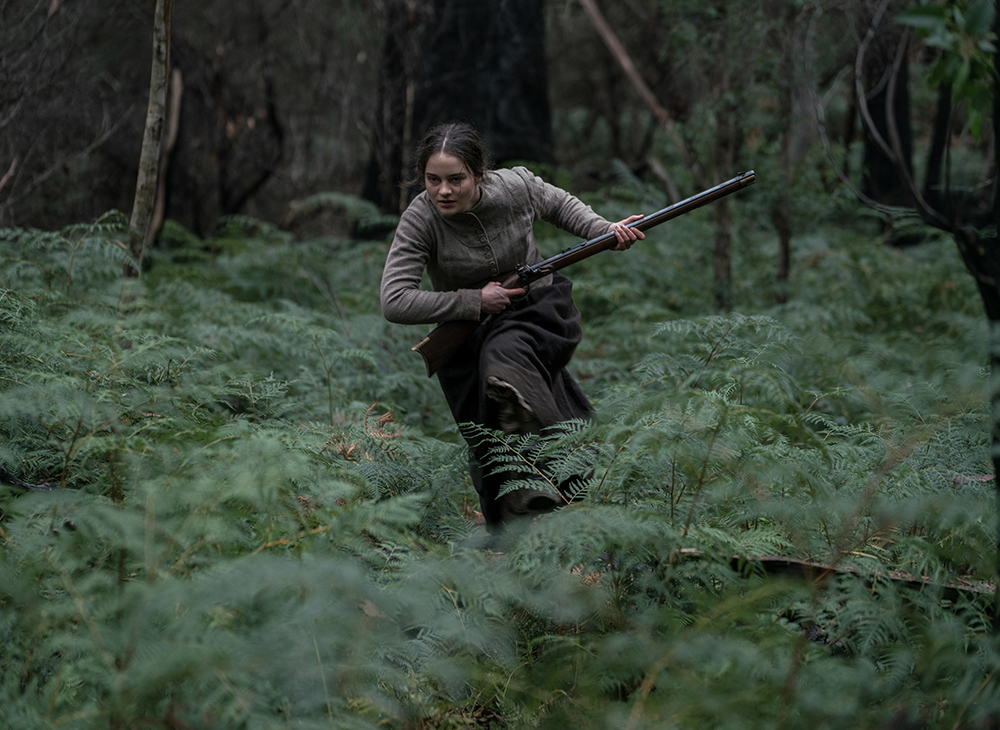 First off- the acting between Billy and Clare was simply amazing.

Apparently, this was Ganambarr’s first film ever. Wow! His acting was so believable, and I loved his character. How he could manage to be the silly “blackbird” he called himself at times, despite the gravity of the situation, was heartwarming. Billy taught Clare the ways of his people, and this eventually thawed her enough to try to understand him. The relationship between Billy and Clare is the center of the story and is what makes this film watchable.

One of the things that I thought was well done, was Clare’s behavior when finally given the opportunity to get revenge. We see how deeply she is damaged. Her trauma caused such PTSD that her actions are not simple. They are complex, and we watch with terror as she makes dire mistakes because of her emotional state. Many revenge films just have the person turn into The Terminator and kill everyone that harmed them.

Humans are fragile creatures. And no matter how angry we are, our true selves and conditioning sometimes fight back.

I also need to mention our bad guy, Lieutenant Hawkins. Claflin plays him so well. He and all the other soldiers are portrayed as sociopaths. Hawkins himself is a sadistic and dominating monster, but we see in his performance that he truly believes his actions to be justified. 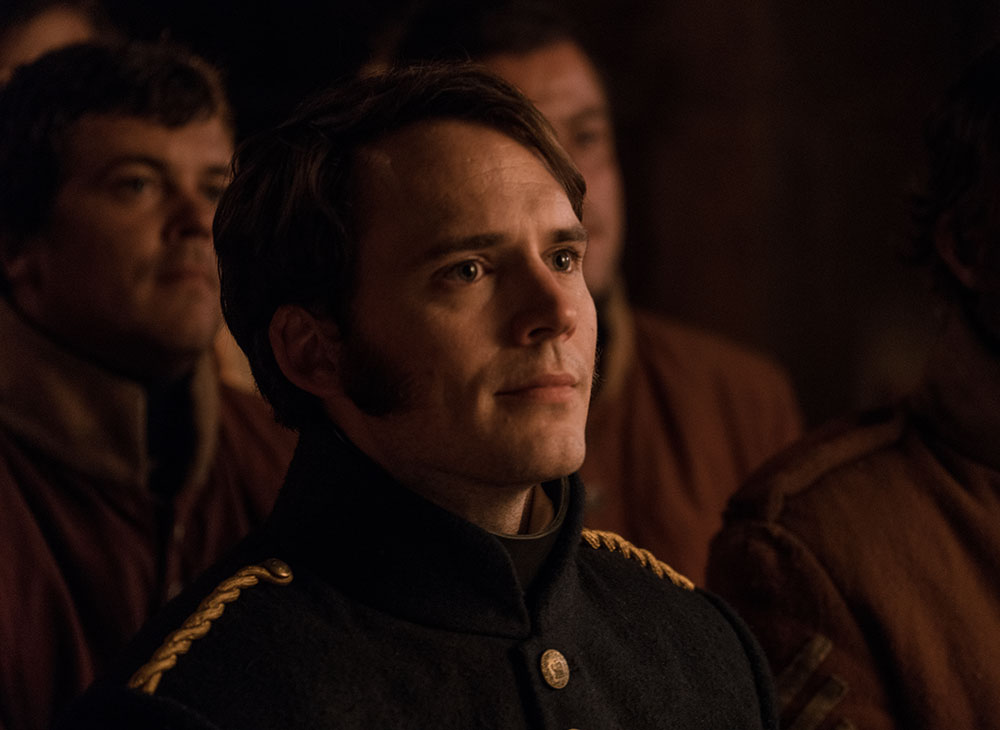 The cinematography was sublime.

Shot on location in Tasmania, the dark, bleak backgrounds, houses on fire, dead farm animals, and natives hung to rot in trees, told the story of the British invasion without any words needed. It was always damp, creepy and claustrophobic in the forest on their journey. Every moment something bad could happen. Tension practically dripped from the trees. The gloomy mood and tone fit perfectly. The final scene was incredible and worth the wait.

Two things bothered me. The Nightingale is a long and heavy film, and I think it could have been edited for a shorter run time. My other complaint is the reference to the birds. Clare is the nightingale because she sings so beautifully, and Billy is the blackbird; free and can go wherever he wants to. I know there were some deep metaphors that could go with those images, and there was nothing given.

I think the film might have worked better if the audience understood the depths the story could have gone if the metaphors were explained. But they were just mentioned, not developed. 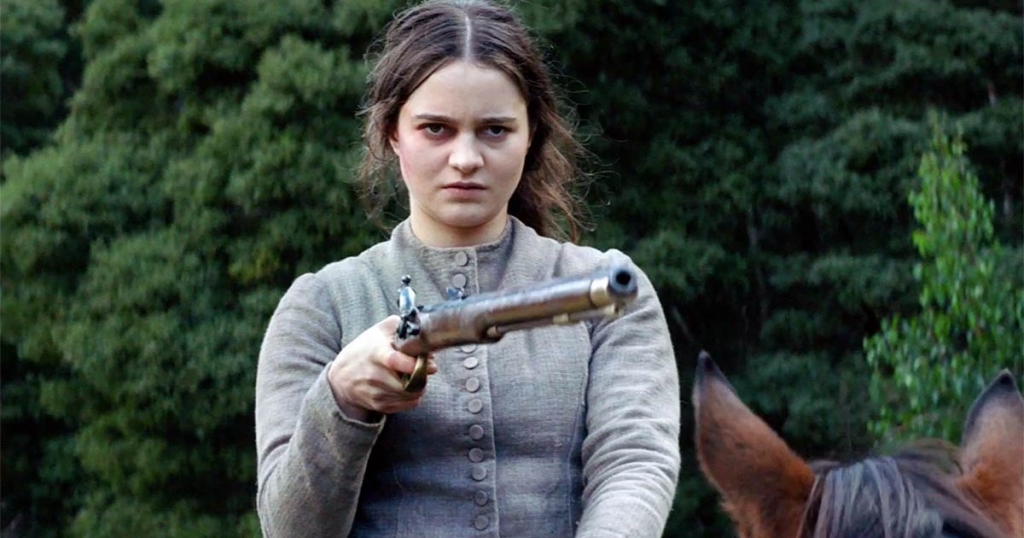 I recommend this film, with a footnote.

Realize what you are about to watch, and then learn the lesson it tells about racism and violence. People are people, and no one has the right to destroy and dominate others. It is a sad, dismal tale, but also one of redemption.

Jennifer Kent has created a story that needs to be remembered. Colonization in all cases is horrible. But it is still happening to this day. The story took me right to the very end of my violence limits and left me an emotional wreck. This is a disconsolate movie that won’t be for everyone.

But all stories deserve to be told, and The Nightingale is a powerful film that has given women and the natives of Tasmania a voice.