A simple story belies the tremendous depth of “Possum” — an unsettling exploration of grief, guilt, and the haunting effects of unresolved trauma. 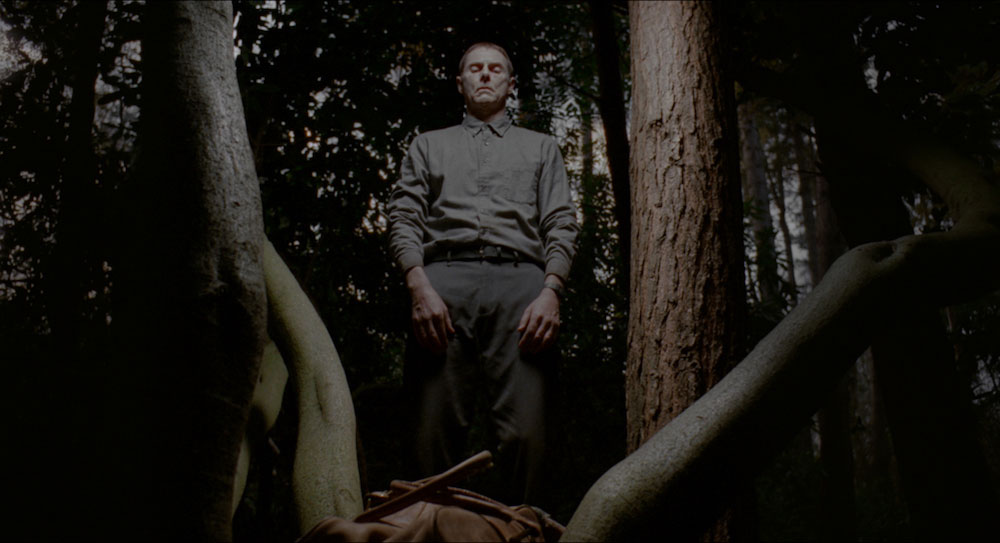 Possum opens with a voiceover of a creepy children’s poem about a spider. The poem, written by a troubled puppeteer named Philip (played to perfection by Sean Harris) is a chilling ode to the titular character, so named because of its nasty habit of playing dead in order to lure and eat children. For inexplicable reasons, the talented craftsman has created a giant, nightmare-inducing puppet of Possum. He shoves the monstrous creation into a big brown bag that he carries with him everywhere — like a giant albatross hanging from his neck.

We first meet Philip on a train heading back home to Norfolk, after a scandalous performance that cost him his job. We’re never told what nature of controversy ended his career. But an awkward encounter with a teen on the train makes it clear that Philip has trouble relating to and connecting with others. 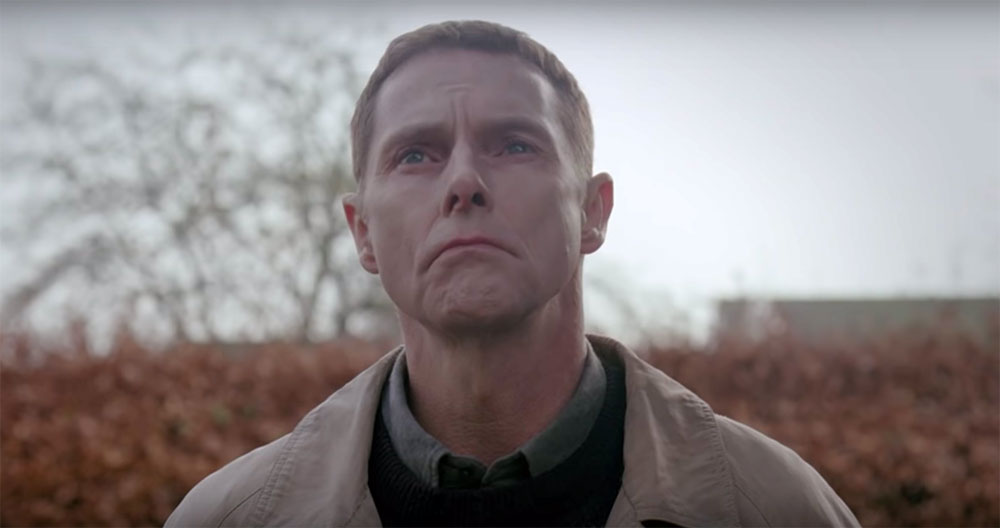 He arrives in front of a dilapidated and apparently abandoned home. He enters with great trepidation to see the ruins of his childhood home — a house frozen in time and sick with decay, a physical manifestation of grief and gloom. We soon learn the house isn’t abandoned after all. One tenant remains to loom over the fallen castle, Philip’s cruel and menacing Uncle Maurice (Alun Armstrong). This is no happy reunion, as Philip’s anxiety is palpable coming face-to-face with a source of his early trauma.

Now back home, the origin of his horror story, Philip decides to rid himself of his baggage — literally and figuratively — vowing to destroy the terrifying puppet creation that plagues his existence. However, this proves to be an impossible task. No matter what he tries to do to destroy Possum — throwing it away, drowning it, burning it, beating it to a pulp — he awakes the next morning to find the thing hanging unmarred on his bedroom wall…or sleeping next to him in bed. 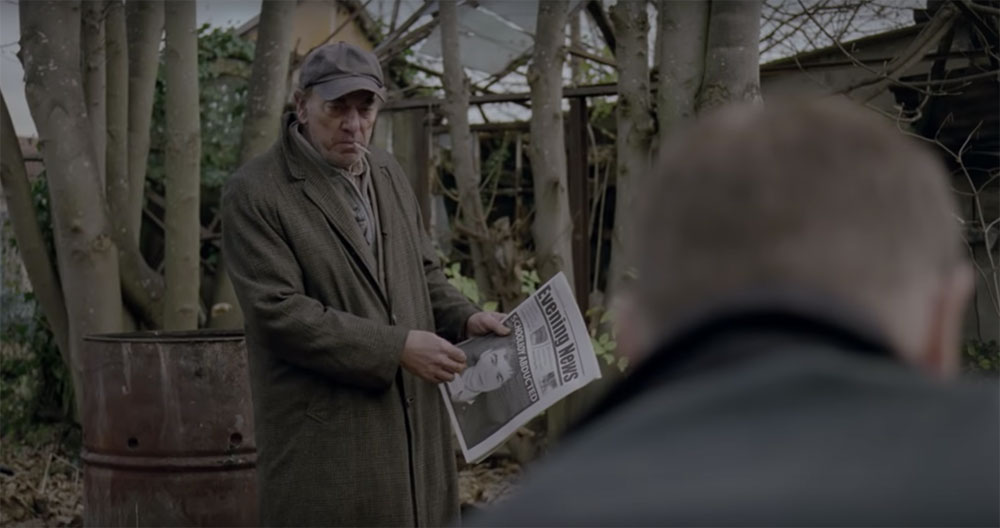 Meanwhile, the disappearance of a local teenage boy — the same boy from the train — has everyone on high alert, with suspicion easily falling on the disgraced puppeteer who just arrived into town. What’s more, the boy’s disappearance echoes a similar incident when Philip was young.

Philip suspects that Possum, a puppet which seems to have autonomy, could be behind the disappearance. But as repressed childhood traumas boil up to the surface and Philip loses his grip on reality, we wonder if anything we are seeing can be believed. 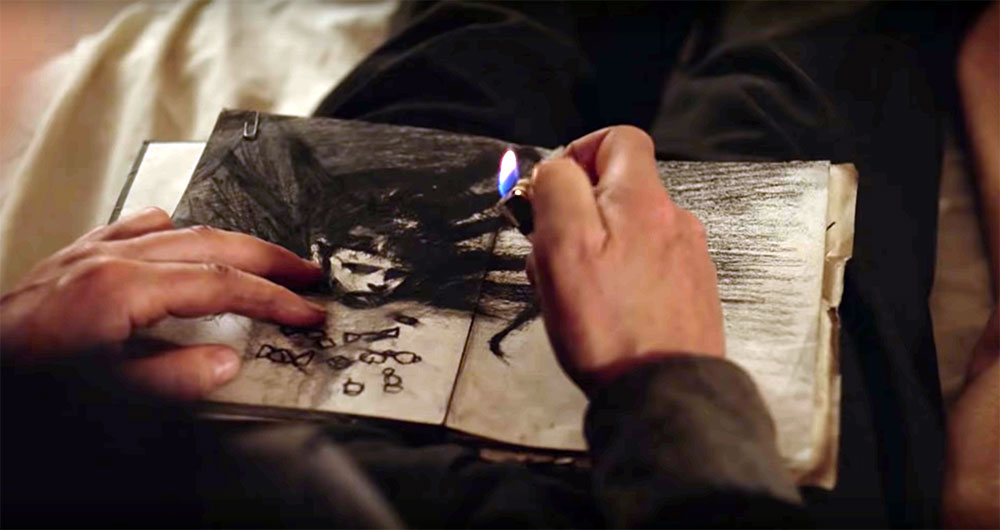 Is Possum a monster, or just a figment of Philip’s fractured psyche — a mind so shattered by past trauma that it’s made him into the monster. Is Possum merely a projection of Philip’s guilt over some unspeakable act he’s had to repress to survive?

And what caused Philip to break? We sense it has something to do with what’s behind that mysterious locked door of his home, the door he regular stands in front of and stares at without ever being able to go in, and the door his uncle mercilessly taunts him to enter.

Around and Around We Go 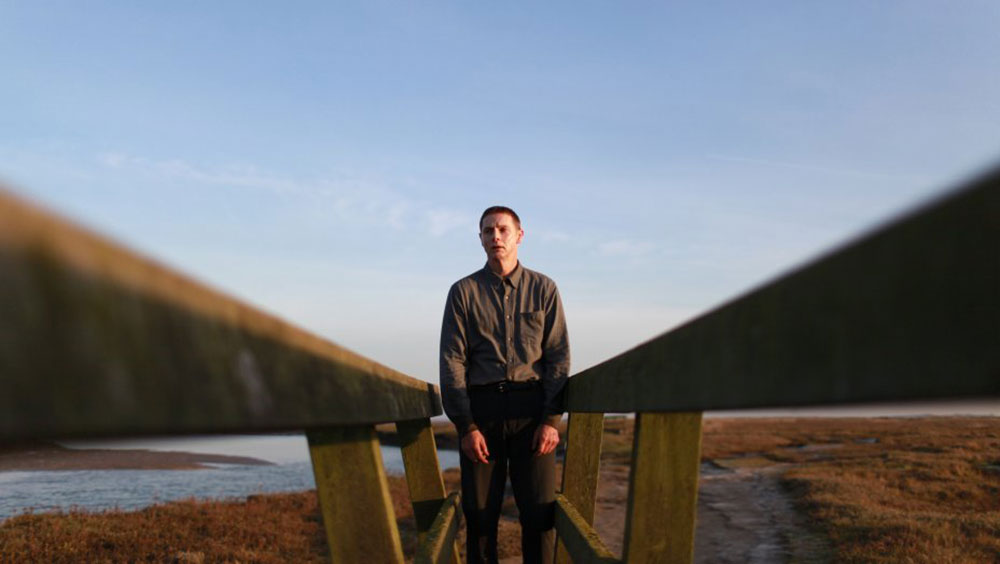 Most of the film finds Philip endlessly traversing the gloomy marshes, woods, and decaying industrial complex of what feels like a mostly deserted provincial town of East Anglian. The film feels almost post-apocalyptic with its desaturated color palette and that sinister recurring poem routinely heard over shots of wilderness and wasteland.

Arresting cinematography, combined with a discordant and unnerving score from the legendary BBC Radiophonic Workshop, pulls us into the grim world that perfectly reflects Philip’s anguished mind and tortured soul. 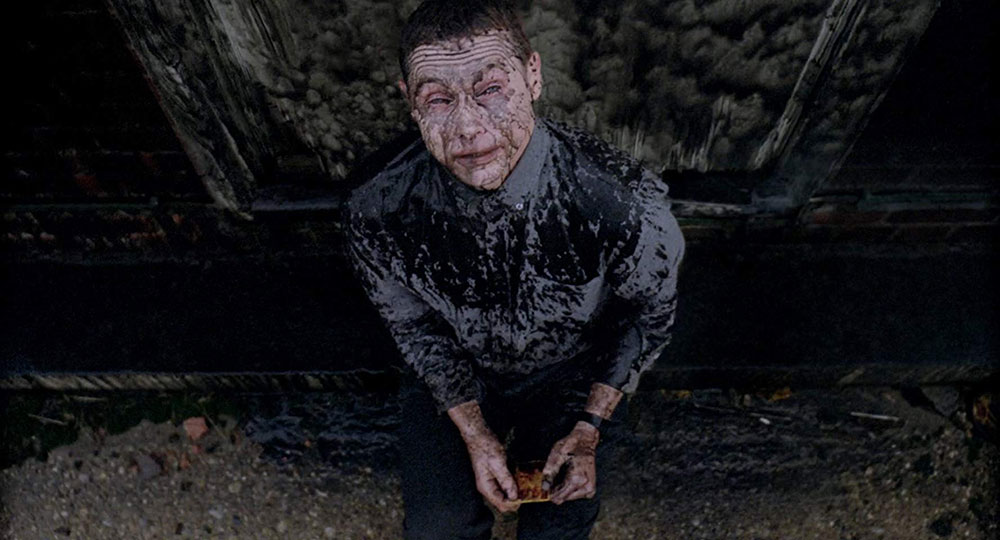 While many critics have expressed frustration over the length of the film (relatively short at one 1 hour and 25 minutes, but slow and meandering) and the banality of the repetition, it’s this off-putting, disjointed narrative structure that gives Possum its potency.

Philip is trapped by the nightmare inside his head, unable to escape. It’s an endless cycle of pain, regret, and suffering. He’s tortured by the hopelessness of his bleak and lonely life and his inability to break free from his past. In order for the viewer to fully understand the depth of Philip’s torment, Holness makes us feel what Philip feels. He makes us ache with desire for resolution and closure — driving us to the point of near insanity with the agonizing repetition of it all. But that’s precisely the point. 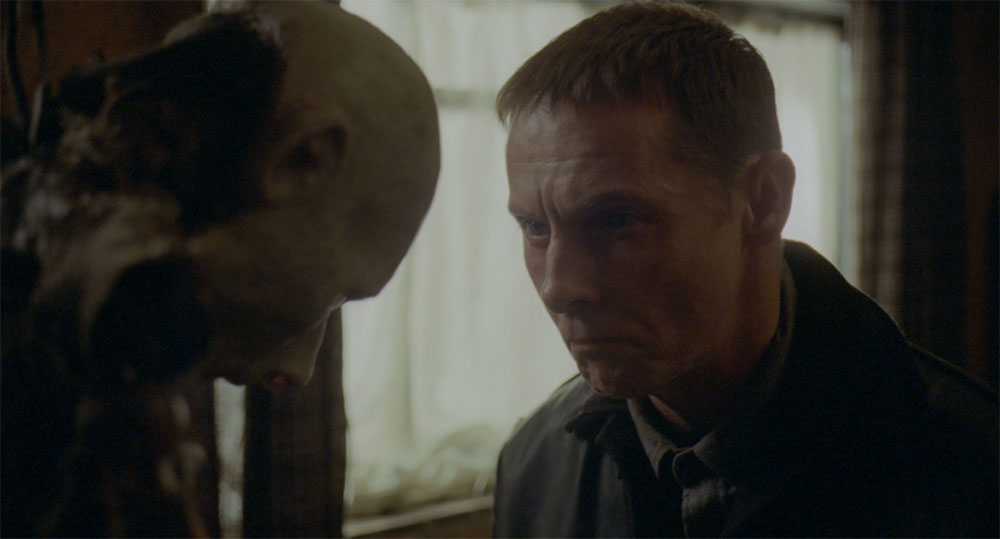 “Can you spy him deep within? Little Possum. Black as sin.”

Harris delivers a stunningly physical, tour de force performance as the man who seems uncomfortable in his own skin — moving his body mechanically as if he himself was merely a puppet controlled by the cruel hands of fate. He shuffles through life, timid and afraid, with a childlike vulnerability that makes him sympathetic.

At the same time, it’s easy to understand why he instills unease in those around him. Mostly silent and intensely expressive, he manages to be both endearing and frightening. 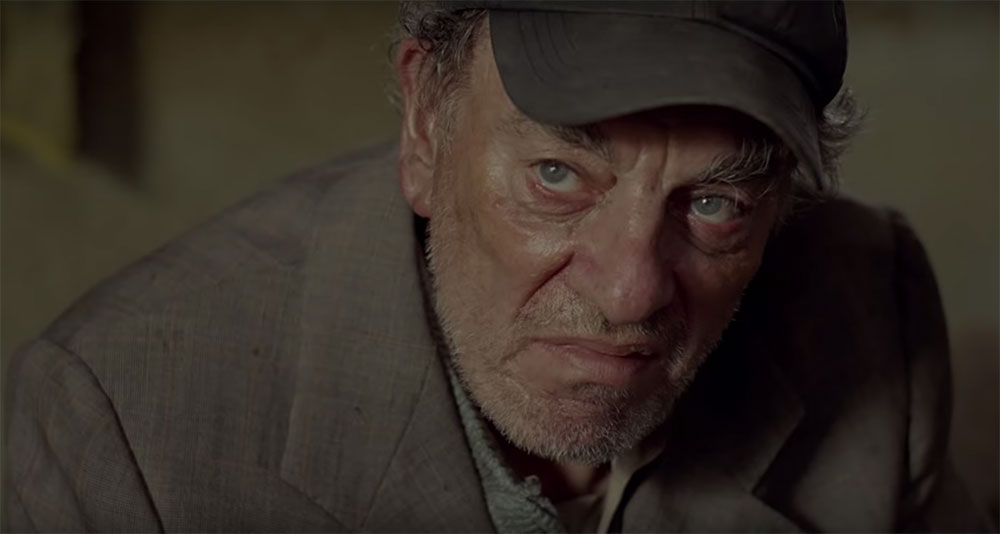 Armstrong is equally compelling as Philip’s foil, seemingly relishing in the repugnancy and nastiness of his character. With his witch-like cackle and menacing, tar-stained teeth-baring grin, he toys with the fragile Philip like a predator playing with its prey before devouring it. And he effortlessly slithers between just disagreeable to downright sinister.

As brilliant as the two actors in this film are, it’s that god-forsaken puppet which really steals the show — a monstrous marionette reminiscent of one of Jan Svankmajer’s wonderfully warped creations.

If you could imagine the root of all your fear and inner turmoil manifested in a twisted physical creation, it would look like Possum. 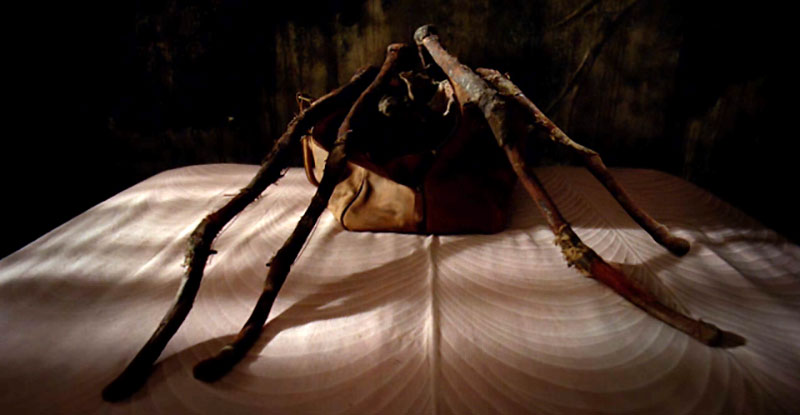 Holness shows masterful restraint, revealing the abomination bit by bit to prolong the anxiety and maximize the impact of the horror. Even from the opening shot of Philip peering down over that ubiquitous brown bag as the giant, realistically sculpted spider legs begin to slowly emerge, it’s the stuff of nightmares. Then there’s that doll-like head with its ghost white face and pained expression.

It’s a face modeled after Harris’ own by gifted designer Dominic Hailstone. When Philip holds the creature up and stares into its hollow eyes, he’s looking into the face of his own darkness — a darkness he tries desperately to suppress.

The Sum of Its Parts