With eye-popping visuals and some technical mastery, Psychotic! has just enough in its favor to keep slasher fans entertained 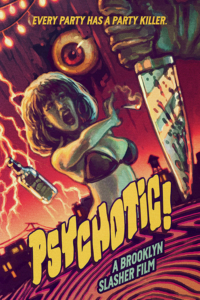 Written and directed by Maxwell Frey and Derek Gibbons, Psychotic! captures the ’80s slasher vibe with impressive camerawork, gruesome practical effects, and a deranged, masked killer whose looks are as eerie as his grisly handiwork.

Frey and Gibbons, who also star in the film as Tim and Stuart respectively, handle the task at hand with great style and energy — especially in the movie’s first ten minutes.

The opening scene, shot entirely from an unknown killer’s point of view, is creatively and masterfully done. Suspense, humor, chilling imagery, good “off the cuff” acting, and some gory makeup work all come into play, setting the stage for the thrill-kill story that ‘Psychotic!’ strives to tell.

Unfortunately, the rest of the film never quite lives up to the exciting promise of its opening scene. But the movie, with its familiar tale of young city dwellers being picked off one by one by a homicidal maniac, is still worth watching for its nostalgic vibe and creative visuals.

A group of Brooklyn artists, musicians, and stoners gather throughout the night, each one dealing with his or her own misfortunes, failures, possible romances, and life-in-general struggles (one narrative arc about a band breaking up adds a lighthearted touch that fits nicely within the plot). In this way, the screenplay’s attempt at capturing the lives of the characters works well in the movie’s beginning. The dialogue is sharp and funny, and the performances of Frey, Gibbons, and Kristen Martin are confident and realistic.

The fact that the masked killer could be lurking about every apartment complex adds a darkly sinister tone as the characters attempt to make sense of the disjointedness of their lives. The score (by Phantomize, Tom Starkweather, and Mark Thyrring) also works very well, with a feeling of looming dread and stalking menace throughout several scenes.

However, many of the positives of the movie — especially the suspense — give way to lengthy scenes of mundanity. The dialogue between the characters appears unscripted and unwieldy, and soon all viewers are waiting for is the killer’s next bloody strike so that the movie can return to its former glory. Though Psychotic! is not a very long picture, a more conservative editing of certain scenes could have made for a much tighter, more pulse-pounding film.

Eventually, the killings do pick up again, and some of them are delightful in their gore and brutality.

The practical effects return audiences to the days before CGI, and the results are a blast to watch. In addition to the effects, the filmmakers at times employ a split screen to show two scenes at once, and this technique builds the suspense and tension in an expert way. Had ‘Psychotic!’ remained consistent with these stylistic touches and explosive moments of violence and suspense, it would have fared much better overall.

Still, the movie has many merits, including a lurid color scheme and unique camerawork by cinematographers Brian Stansfield and James Demetri. With the experience of making this movie under their belts — with all of its strengths and even its misfires — the entire team behind Psychotic! will undoubtedly make something even more advanced and entertaining with their next effort.

Psychotic! had its world premiere at the Brooklyn Horror Film Festival in 2016, and will hopefully see a more widespread release in 2018.