Filled with enough twists to satisfy M. Night Shyamalan, “RUIN ME” is a thrilling and horrifying slasher that reveals deeper meaning on repeat viewings. 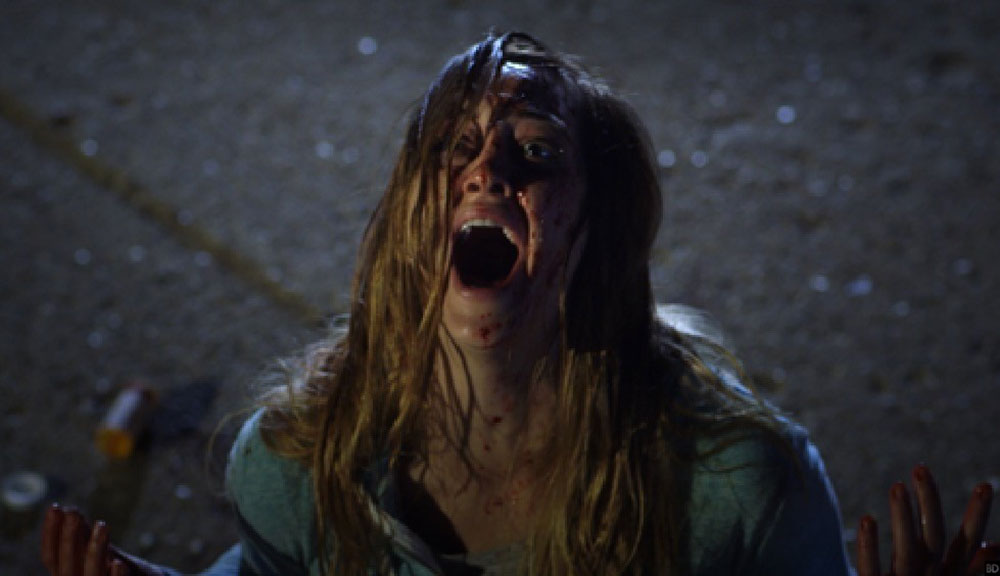 It was only a matter of time before the #MeToo movement was portrayed in a horror movie.  The twist, to me, is that the sub genre dealing with the impact of abusive relationships — the silence and isolation that is a byproduct of abuse — is explored through a slasher film.

RUIN ME, a Shudder streaming exclusive, is about an immersive horror/adventure experience, Slasher Sleepout, which combines the sudden scares of a haunted theme attraction with the mind-bending puzzle solving of an escape room.

A group of horror/escape room fans sign up to be dropped off in the middle of the woods with clues that will lead them to solve puzzles to help the participants win the game.  The Slasher Sleepout storyline is that violent patients at a nearby mental asylum have escaped and are on the loose. The game participants must survive the night and avoid the escaped lunatics.

Alex (Marcienne Dwyer) accompanies her boyfriend Nathan (Matt Dellapina) to Slasher Sleepout, and they join a group of people who are the picture of stereotypical slasher victims. Alex and Nathan first meet a goth couple who are in an open relationship and highly sexual: Pitch (John Odom) and Marina (Eva Hamilton). Next is the social awkward horror nerd, Larry (Chris Hill). The final member of the group is the mysterious and possibly dangerous loner, Tim (Cameron Gordon).

Once the group begins their Slasher Sleepout adventure, Alex emerges as the puzzle solver. But her talent at solving puzzles can’t prepare her for what’s happening. What starts out as a game of wits turns into a bloodbath.

As the members of the group begin to get picked off one at a time, Alex begins to realize that the game and the deaths may be all too real.

Mixing in familiar horror film tropes with some inventive twists, director Preston DeFrancis and writer Trysta Bissett keep the audience guessing at what comes next. DeFrancis and Bissett let the audience think they know what’s coming, and then give the story a subtle twist that completely changes the viewer’s expectations.

The way the story of RUIN ME unfolds mirrors certain abusive relationships. Alex, a recovering addict, seems to have a loving and supportive boyfriend. But, as with many abusive relationships, Nathan can subtly turn loving and supportive into controlling and overbearing. Nathan, in a sense, is killing Alex with kindness, or what he considers kindness. This relationship plays out as they get deeper into the game and the eventual deaths.

When everything is revealed in an explosive ending, you will want to go back and watch RUIN me for a second or even third time.

Knowing the ending, you will see the clues that DeFrancis and Bissett laid out inside the movie. In fact, there are enough clues hidden within the story that if you put them all together the movie’s ending is revealed well before the actual end of the movie.

Kudos to Trysta Bissett for a brilliant script and Preston DeFrancis for his direction on RUIN ME.

Not only will RUIN ME reward audiences with a thrilling slasher flick on their first viewing, but will continue to reward sharp-eyed viewers on additional viewings.

RUIN ME is now streaming exclusively on Shudder.