A smart little ghost-cum-slasher film, Shudder’s “Séance” isn’t quite the movie it makes itself out to be; it’s much better. 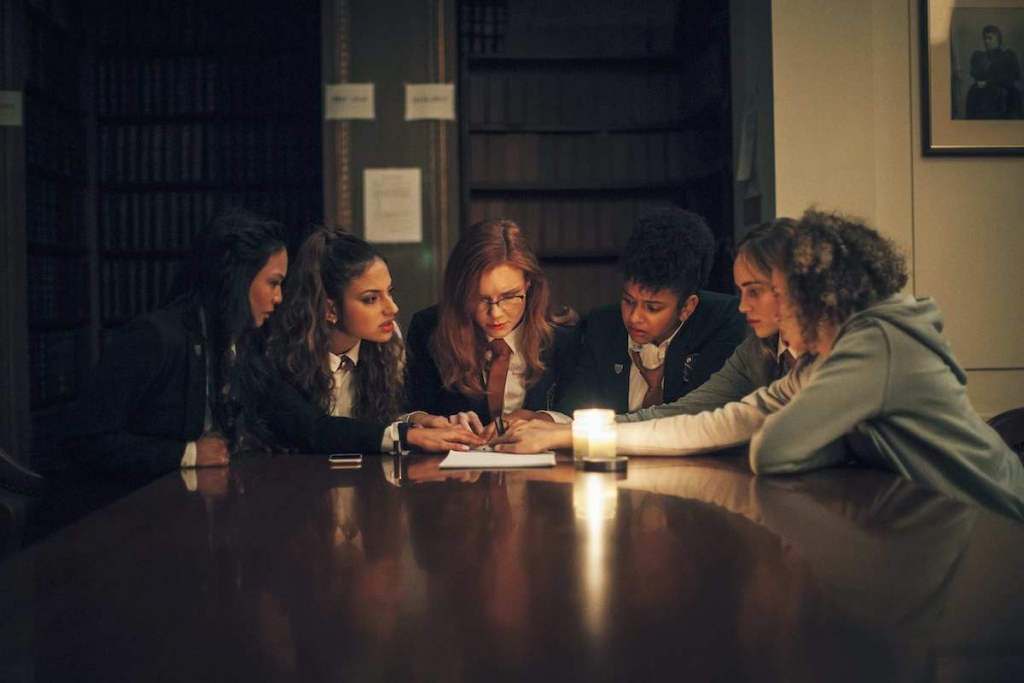 A group of young gals, attractive and effervescent, are gathered around a candle in an otherwise dark room. They speak in hushed tones, afraid to be too loud in the stillness. The camera pans slowly, optimally placed to capture supple skin and copious curves. The girls can’t help but talk about sex at such a spooky time. Suddenly, the candle goes out, and a shape appears from the blackness, bloody and angry. The girls have been marked for death…

While that is exactly the kind of movie I expected Séance to be, it is certainly NOT the film that writer/director Simon Barrett and his capable cast & crew have made. And it’s a move that pays off.

Séance has no interest in being just another “beautiful naked coeds get killed by deranged stalker” movie. That conceit has been done before, countless times.

No, Séance has something else up its sleeve, something that bucks the trend. This results in a movie that becomes nearly a different beast entirely around the 2/3’s mark.

Some movies would flounder with that kind of shift. But Simon Barrett (writer of You’re Next and The Guest in his directorial debut) sets the tone early, and some of the expectations as well. So, while the type of movie it is might change, the tone stays firmly in check.

For starters, the cast is uniformly excellent. Each girl brings their A-game, channeling a whole lot of Mean Girls, a little bit of The Craft, and more besides. I’ll avoid any other comparisons for the sake of keeping spoilers to a minimum.

Naturally, as with any good scary movie featuring a bevy of co-eds, it’s only a matter of time before these girls start getting picked off.

Though Séance might be trying something different in the long run, it still hews pretty close to the established formula for the supporting cast. 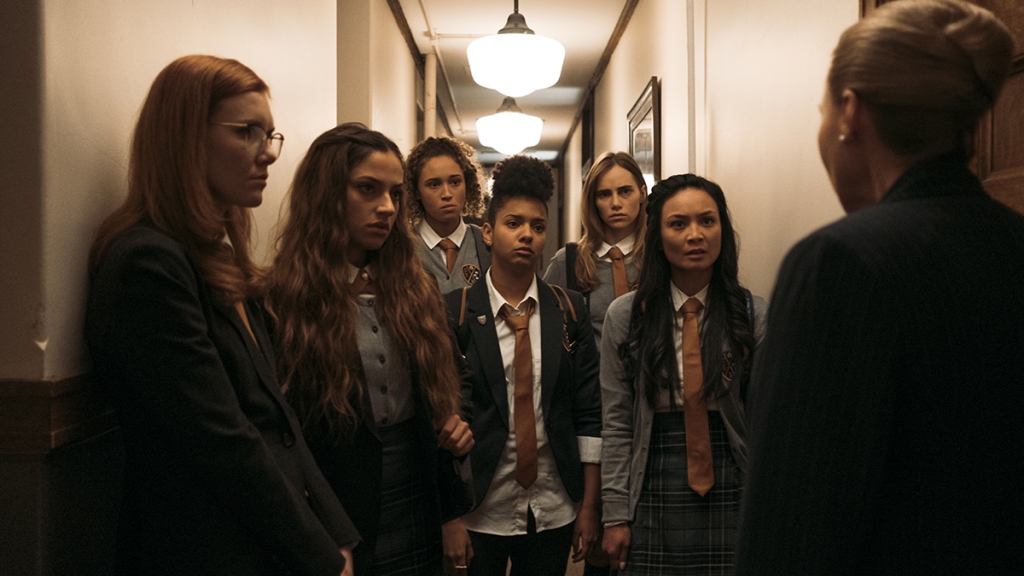 The main protagonist is Camille Meadows, capably played by British actress Suki Waterhouse. As the new girl recently arrived at the prestigious Edelvine Academy, she is the audience’s surrogate for the creepy events taking place.

Unlike most “new girls” in these types of films, Camille is no shrinking violet. She has snark to spare, refuses to be cowed by the established cliques within the Academy, and can throw a wicked right cross.

That’s not to say that she’s a warped male idea of what a “tough girl” should be.

She still has fears and doubts and is still feminine. And though she isn’t exactly enamored of her new frenemies, she isn’t unaffected by their deaths either.

Her toughness is internal. And unlike some movies, it’s something she starts out with. She doesn’t “discover” it along the way, just when she needs it most.

Unlike most main characters in these types of movies, Camille remains a cipher for basically the entire runtime. 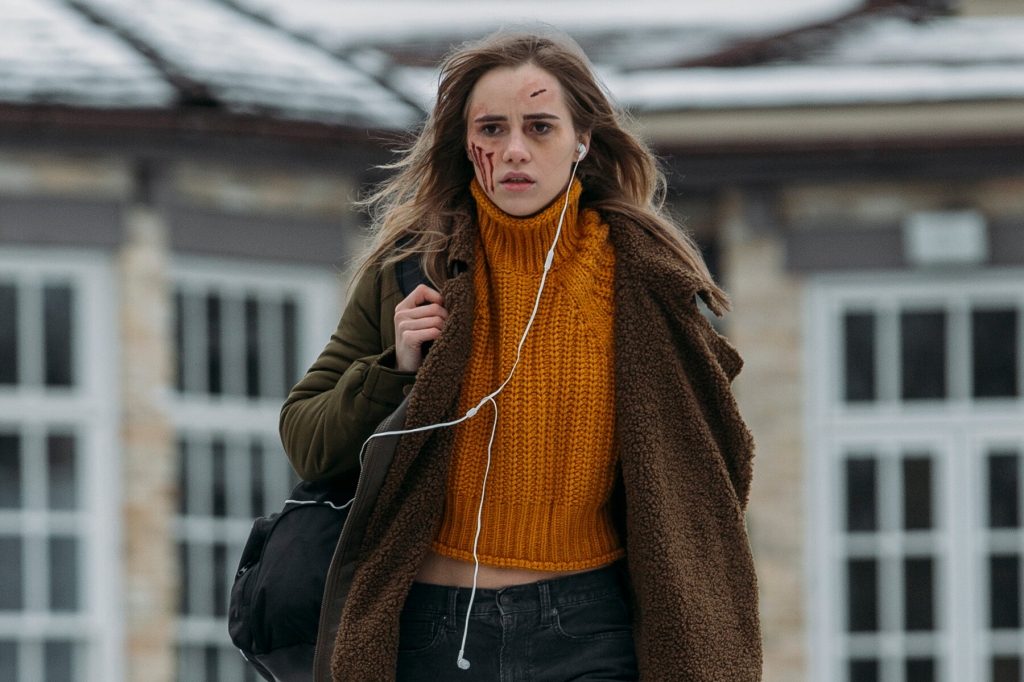 We see her arrive at Edelvine in the back of a luxury car; earbuds in and an unhappy expression on her face. It’s evident that she doesn’t want to be at the academy. But the reasons for why that is are kept under wraps until the end of the movie.

It’s a move that ultimately works, especially with how the denouement of the movie plays out.

The rest of the cast fill their roles admirably. Some of the expected types are here; the cruel ringleader, her equally as cruel lieutenant, the smart girl running with the wrong crowd, the shy one, etc. On a side note, the Black girl doesn’t die first! It’s nice to see a movie with a few women of color actually break that ridiculous tradition.

Standouts include Inanna Sarkis as ringleader Alice, Madisen Beaty as smart girl Bethany, and Ella-Rae Smith as Helina, the shy girl who befriends Camille at the beginning of the movie.

The sole male in the entire film is the Academy’s groundskeeper/handyman, Trevor. As played by Seamus Patterson, Trevor comes across as a little socially awkward, but still sweet. His age is never established, but it’s close to that of the girls at the academy.

Almost a character unto itself, Edelvine Academy is all old stately buildings and dark rooms, the perfect location for a movie like this. It’s never really made clear what time of year the movie takes place in, through frequent snow would indicate a wintertime setting.

As mentioned earlier, the movie fans expect may not be the movie they get. 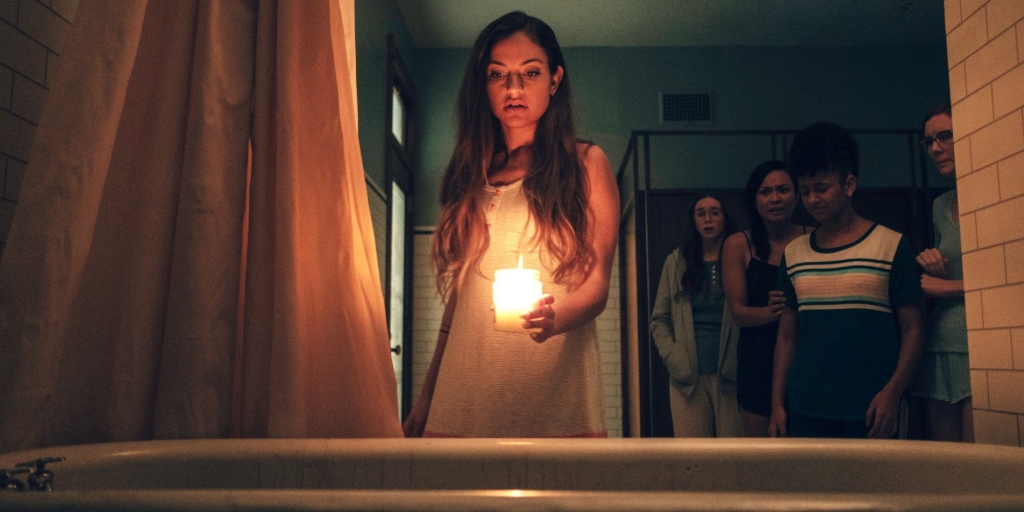 Séance takes a few established tropes and subverts them.

First and foremost; none of the females are sexualized in any way. Like, at all. It simply isn’t interested in being that movie.

Far be it for me to try to tear out any foundational stones from the hallowed halls of Terror and Titillation, but it was a nice change to just have girls in peril for a change. Instead of naked girls in peril.

It also offers up an interesting balancing act with the characters getting killed. Yes, they might be bitchy and have done some reprehensible things…but do we really want them to die? Initially, that answer might seem like a yes, but it does shift as the movie plays out.

They’re not necessarily how young girls are traditionally portrayed in horror movies. In fact, most of these girls pass the Bechdel Test with flying colors. They talk far more about their futures and their friends than they do about anything else.

I daresay that having an entirely female cast (save the one exception) drives that point home more than other movies of a similar concept.

I can’t remember which book it was that I read (some science-fiction thriller, years ago) where robots were taking over, and when they had to assault the human military forces, they made their android army look like women and young girls. The thought process behind this act was that most men (aside from 95% of the killers in slasher movies) have a hard time harming females.

And I believe that author was spot on because I really didn’t want harm to befall these young ladies (with one concession, but she had it coming).

The Japanese Noh mask worn by the killer/entity is also pretty damn cool. 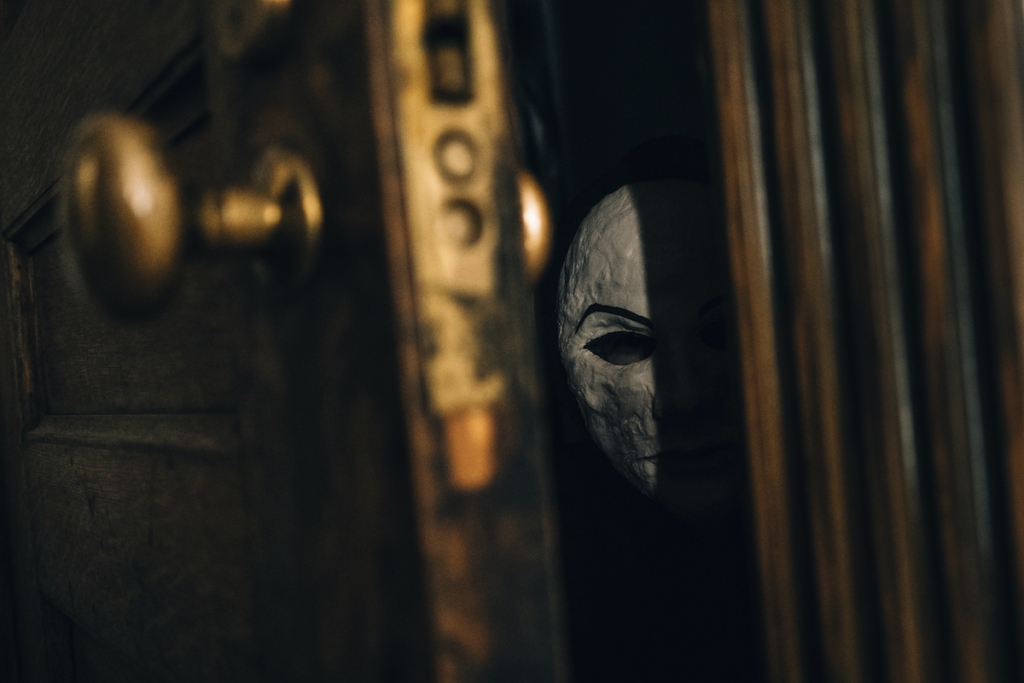 It may not cause the same sensations that the Captain Kirk mask did for Halloween, or even the Babyface from Happy Death Day, but the sheer fact that it is unique goes a long way.

Lastly, there is a small bit of queer romance that takes place, and it’s handled like any other blossoming attraction. This is how ANY romance should be tackled, regardless of representation. I can honestly say that it was greatly appreciated. Again, the romance wasn’t thrown in for the sexy factor. It just existed. Naturally at that.

I mentioned the soundtrack earlier, and it definitely bears a special callout.

As composed by electronic producer Sicker Man, the soundtrack for Séance is a triumph. Ranging from orchestral movements with choral segments to ambient tones accompanied by strange sound effects, and even a few pop-like offerings with propulsive beats and bass drops, the music just fits the movie perfectly. It’s heady and atmospheric — and is also great to listen to on its own.

Séance isn’t all sunshine and roses, however. There are a few issues that keep it from being a modern masterpiece.

One of the most glaring of the issues is the strange instances where a fisheye camera lens is used. It’s a jarring jump from standard scene to fisheye scene, one that doesn’t quite work with the rest of the cinematography. Not sure what the filmmakers were hoping to achieve there, but whatever it was it didn’t work.

It’s also a little uneven in the gore department, starting out with hardly any of the red stuff, and ending with plenty of it being tossed around.

Last but not least, the motivation for the killings is ridiculously stupid. For such a smart movie, the reasoning is incredibly D-U-M-B. Nearly any other sort of motivation would have been better. It’s so bad, in fact, that it threatens to derail everything that came prior.

Legitimately, Séance would have been a five-star movie for me without this huge misstep. The movie hangs on, however, primarily due to the strengths of the actresses.

Could Séance have used a few more scares? 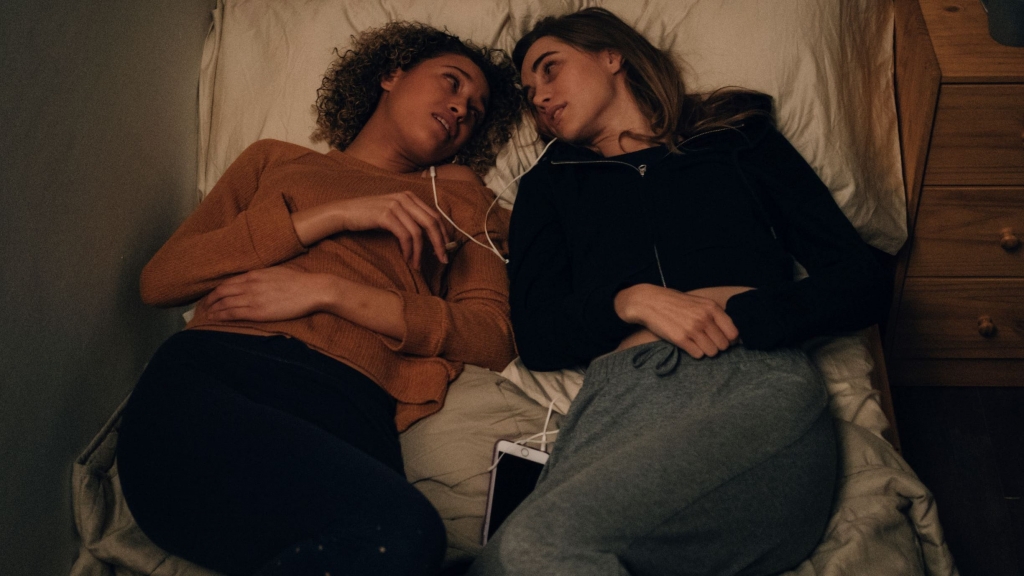 The characters die pretty much when we expect them to (i.e. when they go off alone), and jump scares are nearly nonexistent. But the movie does establish a solid sense of dread, which is always appreciated.

One interesting tidbit is that, though they are polar opposites, this film shares more than a few similarities with the Ryan Gosling-led Drive. Both films feature neon pink text for the credits, both tried to take a different approach within an established genre (action/thriller for Drive, ghost story for Séance), and both were carried along by an amazing synth score that helped provide a unique feel.

I wouldn’t call either one arthouse per se, but they certainly took the path less traveled.

I loved Drive, and I found myself loving Séance as well. This is a smart horror/thriller. It’s certainly not the scariest slice of celluloid, but it does have an identity all its own.

Overall Rating (Out of 5 Butterflies)
MORBID MINI
Beautiful girls in peril is always a perfectly acceptable recipe. But the fact that Séance takes that simple premise and adds a few layers onto it makes it a special film. It won’t be everyone’s cup of tea, and those searching for significant scares or gore should look elsewhere. But if you’re interested in a ghost movie that isn’t quite what you expect, and enjoy strong female performances, then Séance just might conjure up some enjoyment. Give it a shot.