Never losing sight of its high concept premise, “Same Boat” is as smart as it is hilarious; an irresistibly charming movie with an earnest message. 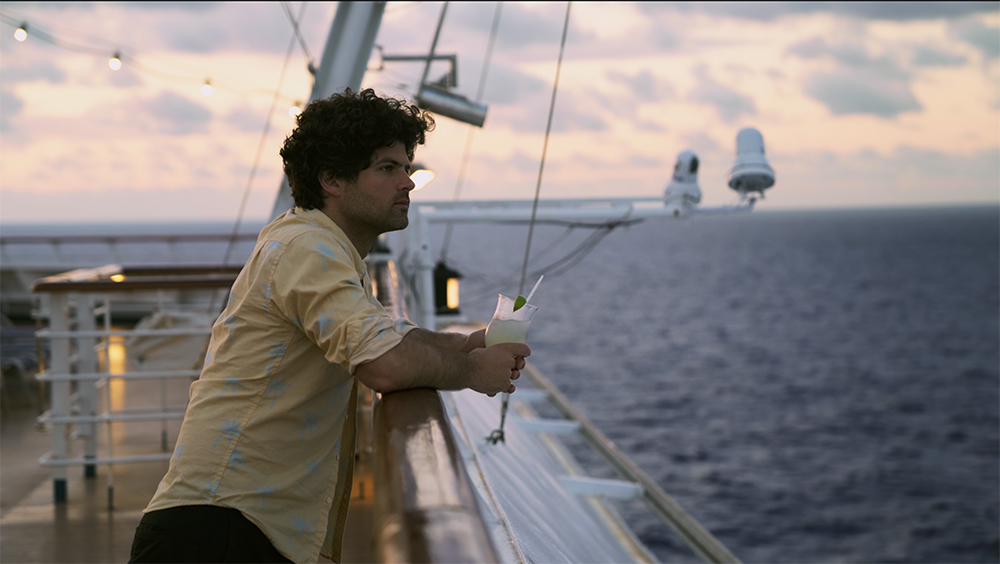 James (Chris Roberti) and Mot (Julia Schonberg) have a particular set of skills: they’re time traveling assassins set out to kill bad people throughout history, or to stop (kill) good people who lead to things that are bad for humanity. For example, the opening scene takes place in 1989 and shows a newlywed couple on their honeymoon who will eventually go on to invent ‘reality TV’. Naturally, this idea threatens the good of humanity and they are quickly disposed of by James and Mot, our time-hopping assassinating partners.

Cut to 2019, and Lilly (Tonya Glanz) sits with her boyfriend Rob (Evan Kaufman) at a busy restaurant as he rattles on about how he took 900,000 steps this month (he thought he’d only take 800,000 and wonders where the extra 100,000 came from). Lilly looks both bored and annoyed. And sensing that this relationship is a mistake, she breaks up with Rob.

“But we just set sail,” he says on the brink of tears, as we then see the giant cruise ship they are on pulling away from the dock. Lilly has also set sail now, from dinner at least. And while she walks out of the dining hall looking a bit distraught, we see James enter the frame and walk by her. Little does Lilly know, James is an assassin. And little does Lilly know, she’s his target. 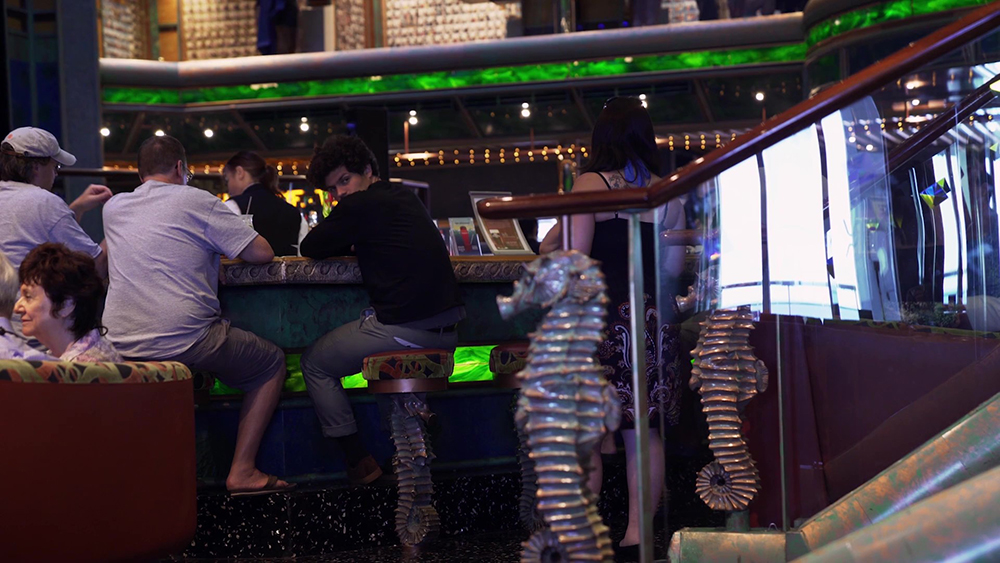 If that isn’t a romantic set up for a classic meet-cute, then Abe Lincoln didn’t wear a tall hat.

Tonya Glanz is wonderful as Lilly, equal parts alluring and cute; any guy would want her attention.

But she doesn’t need any guy to talk to. She’s perfectly content with her own company on this post-relationship cruise that she’s now on. So when Lilly does take the time to talk to James, it feels special, and James knows it.

Of course this throws a wrench in his whole ‘I’m-from-the-future-and-I’m-here-to-kill-you’ agenda, causing James to postpone his assignment for the time being. 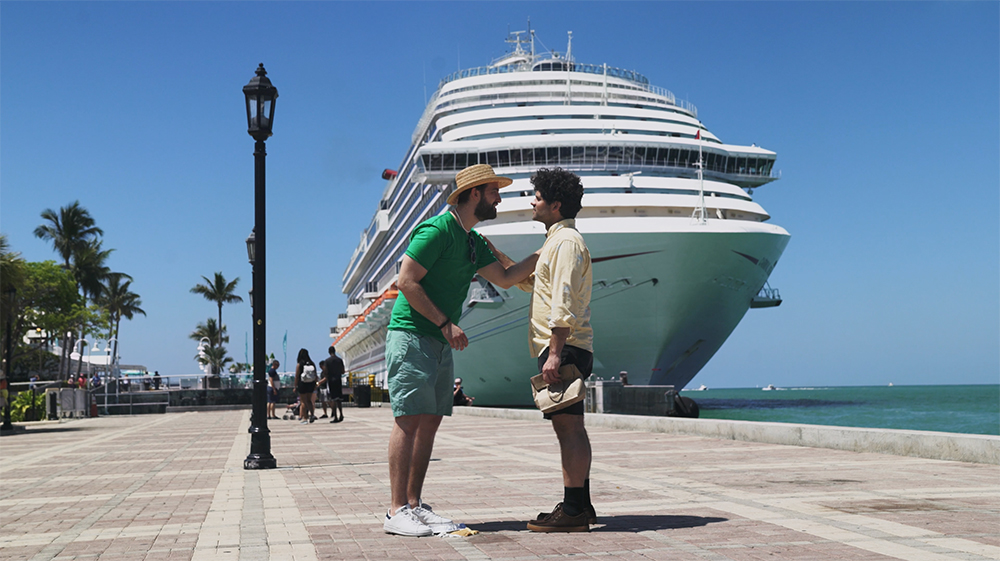 The cruise ship is full of oddball characters who float in and out of James’s time on the ship.

Katja (Katie Hartman) is so damn funny as a dirty talking, let’s-break-the-rules room service employee. And Carlo (David Carl) is wonderfully awkward as the uncomfortable recipient of her misbehavior. Then there’s Rob, poor Rob who was dumped by Lilly just as the cruise was setting out to sea. He and James become friends on the ship, and Evan Kaufman as Rob steals every scene he is in with one hilarious moment after another. The guy has impeccable comedic delivery and timing and adds several laughs to the film.

James hints several times that the future isn’t so bright, and how his time hopping, life-ending lifestyle gives him only “18 to 20 percent” satisfaction. He’s an empty person inside lacking hope. But he says how Lilly makes him feel hopeful, like good things can still happen, and you believe this when he says it. 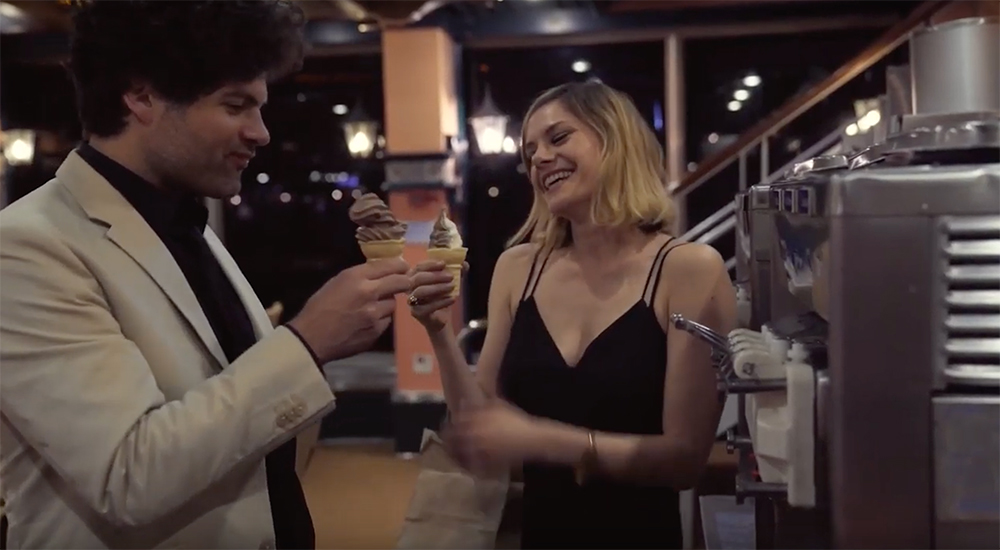 Roberti (who also wrote and directed) and Glanz are so good together on screen.

In this film full of goofball characters, the two that are the most grounded (on the surface, anyway) find each other just when they need it most.

Being the only two straight-played characters in the film, the attraction between James and Lilly feels natural and destined. But with the sun shining down, the ocean stretched out before them, and the cruise ship like a giant playground for adults, it also feels dreamy and full of whimsy.

Meanwhile, Mot has been sea sick and confined to her room. Unable to help kill the target, she functions as James’s conscious (career wise), and reminds him they are here to work and not to fall in love. 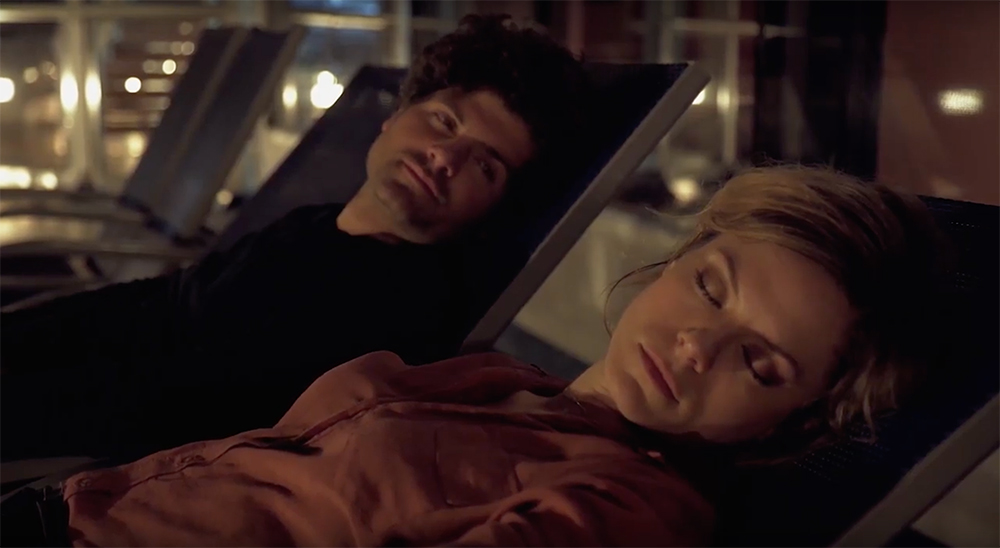 Mot works to raise the stakes in the already hairy situation that James finds himself in, adding an important layer to the films emotional core.

What’s James supposed to do? Allow himself to fall in love and have a chance at what is currently elusive happiness, or fulfill his orders and assassinate the woman who will unknowingly cause some bad thing to happen? That’s one dill of a pickle.

Secretly filmed on a real cruise ship, Same Boat feels sneaky and playful, like falling in love for the first time.

Writers Chris Roberti and Josh Itzkowitz never lose sight of their high concept premise, building out the rules and adding surprises along the way. As a result, the story always feels one step ahead of where you think it might be going.

SAME BOAT is a wonder of a movie: it’s romantic, it’s smart, it’s laugh-out-loud funny, and it just makes you feel good. And it makes you realize that we’re all just one time traveling assassin away from falling in love.

As a side note, watching this in the midst of the COVID-19 pandemic, it was nice to laugh and be reminded that we’re all in the same boat, and to feel hopeful that good things will happen again.