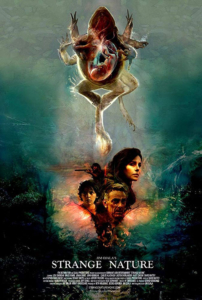 Strange Nature is based on true events that happened back in the mid 1990s when thousands of deformed frogs were found in the waters of Minnesota.

The film follows Kim, a former one hit wonder pop star and single mother, who moves herself and her 11 year old son back in with her father in an attempt to build a new life together. When the deformities begin to move beyond just frogs, the hope of a new life is derailed by a deadly, town wide threat.

The film does an excellent job setting up the characters that populate the small Minnesota town and giving each a sense of depth.

The script takes the time early on to convey the different attitudes of the townspeople towards the strange mutations taking place. Some show concern and want to look into the matter further, others say let it be because the local pesticide company is an important part of the farming community’s economy.

It’s a solid script that smartly focuses on the characters and makes the viewer root for Kim from the beginning. It also shows what’s at stake right from the start, making the tension slowly rise as the situation worsens.

While the film shows that people at local companies and the chemicals they’ve spread around the area may be responsible for the mutations, it also focuses on people taking care of each other. Kim moves in with her father to take care of him as he slowly dies from cancer of the liver. Trent (Faust Checho), the high school science teacher, lives with and takes care of his sick mother.

So the script is careful to not completely demonize humans altogether, but rather show them as flawed at worst. It’s this depth of character along with some lighthearted moments that make the largely serious script work so well.

In addition to the script, the cast as a whole does great work bringing the characters of the town to life. Lisa Sheridan as Kim is extremely likable and portrays her fallen from fame character with the perfect blend of humility and regret. Bruce Bohne is equally as like-able as the sweet, stuck in his ways dying father and character actor Stephen Tobolowsky is perfect as the sincere yet cautious Mayor Paulson.

The only disappointment would be the severely limited use of Tiffany Shepis, who is only utilized in a single scene. Shepis is one of the best indie actresses out there and deserves much bigger roles than a mere cameo.

As the deformities turn into a larger and larger threat to the town, director James Ojala gets to show off his skills at special makeup effects. Along with the deformed frogs we get a family with birth defects, a newly born baby with heavy mutations, and a dog that is losing its skin. It’s the final act, however, where Ojala lets loose when a monstrous, mutated dog viciously tears through the area and savagely rips apart several characters.

There’s plenty of guts and insides on display and a lot of spurting and dripping blood. It’s a rousing and violent finale and the practical effects are what horror fans love to see.

First time feature film writer and director James Ojala shows a real talent behind the camera. Strange Nature is a tightly written, superbly paced eco-thriller that does more than simply aim to shock with deformed makeup effects and mutated animals. It’s also a study on human behavior and the constant battle between those who seek the truth and those who choose to deny it.

Strange Nature is available on DVD and VOD from October 2.