Talon Falls lacks much substance, story, and tension,  but it’s satisfying enough for those looking for a little gory, mindless fun. 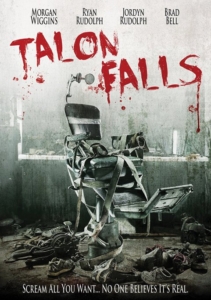 Talon Falls tells the story of a popular local Halloween attraction that really tortures and mutilates people in front of patrons who think it’s all just part of the show.

As the film begins, right away we’re introduced to pretty familiar territory: a group of college kids headed to a cabin in the woods. They stop at a gas station that is run by a hillbilly who creeps out the group as they stop for gas. It’s here where they find out about Talon Falls, a local haunted house attraction. Looking for something fun to do, the group decides to give the scream park a try.

Like House of Purgatory and 6 Degrees of Hell before it, Talon Falls continues the nightmarish scenario of the events taking place inside Halloween attractions being real and not part of the show. It’s a scary thought — and a relatively new take on the haunted house sub genre.

That being said, it doesn’t make for the most original storytelling. By default, we get scenes from insane asylums and chainsaw-wielding maniacs; typical haunted house fare and  hardly new scenarios for a horror flick.

The one thing that Talon Falls lacks most is a story of any kind for the viewer to grab on to. It’s just a look at a nightmare situation for a group of very unlucky kids that begins to feel like a stretched out short film around half way through the film.

Given the built in, predictable location and lack of any real story, the stakes were non-existent, and there were no surprises to be had. It’s a pretty straightforward premise, and you know what the film is from the get go.

All of this isn’t to say that Talon Falls is a bad film, because for the most part it isn’t. It just suffers from a lifeless script. On the plus side, with a run time of 74 minutes, it moves fast and serves its purpose as a quick watch Halloween flick. Honestly, I got the feeling that’s exactly what it set out to be.

It may take itself a little too seriously in the middle act, but it also serves up a good amount of gore, some decent acting and solid Halloween atmosphere and visuals. And for 74 minutes on a night in October, I suppose that’s enough to qualify as a one-time watch.

There’s just not much meat on the bone here. The film relies too heavily on its scream park attraction atmosphere, lacks any interesting characters and feels a bit stale without any surprises. If you’re done binge watching all your usual Halloween flicks and are desperately searching for something new, give it a watch. But it definitely won’t make your regular holiday rotation.