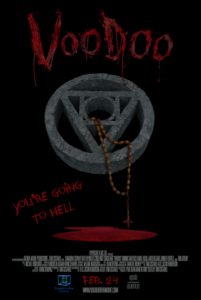 Starring Samantha Stewart as Dani and Ruth Reynolds as Stacy, VooDoo tells the shocking story of two best friends and a manic descent into devilry of the most sickening kind. Despite the low-budget and the occasional contrived camera effect, Costabile’s film is both horrific and transgressive, and a much-appreciated deviation from the norm.

VooDoo begins rather tepidly—but only for so long. Dani has just arrived in sunny Los Angeles to visit her cousin and best friend Stacy. Using the conceit that the pair must document their every waking moment with a camera, Dani and Stacy visit a number of famous tourist spots, restaurants, bars, and beaches. Though this portion of the film lasts a bit too long, audiences do receive key pieces of information along the way. Prior to her trip, Dani had just ended a volatile relationship with a married man. In a fit of voodoo-inspired rage, that man’s wife, Serafine (Constance Strickland), had cursed Dani with some kind of magical hex. Dani grows increasingly worried about this supposed curse—until one fateful night when her entire existence becomes her most foul nightmare. 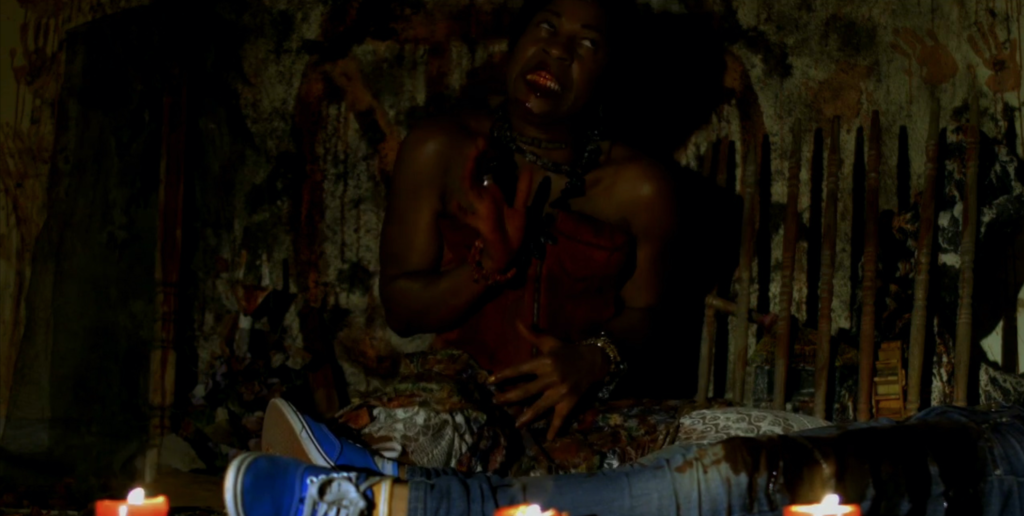 At this point, director Costabile and actress Stewart fully commit to one of the most deranged and psychologically twisted worlds ever to appear in an indie film.

As Dani’s journey into the bowels of hell begins, I was immediately reminded of a walk-through haunted house—the kind with pop-up monsters and ghouls, sausage casings for intestines, and buckets upon buckets of fake blood and guts. Throughout the second half of the picture, Dani is forced to wander a subterranean pit of death and decay, and around every corner lurks some new and gruesome terror. Disembowelments, brandings, a bloody birth, an umbilical cord used as a garrote…these are just a sprinkling of the sights that await you should you choose to watch VooDoo (and you should). The most awful violations, though, await Dani as she gets dragged before a diabolical coven and turned into a mere shadow of her former self. I was surprised, in the best way, by just how far the film was willing to go to depict such a perverse and vicious environment. 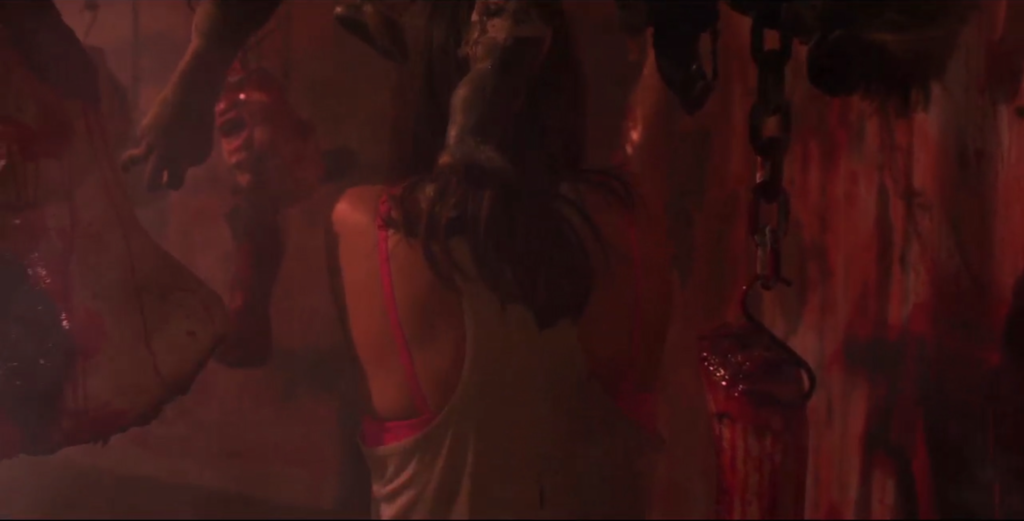 Samantha Stewart (The Young and the Restless, Days of Our Lives) tackles her role to the hilt, bravely portraying Daisy as an innocent young woman who becomes ravaged and abused by a fiendish cult. In his script, Costabile cleverly lowers our expectations by presenting a rather run-of-the-mill story for the first 45 minutes or so; he then shocks audiences by delivering the horror goods in the second half, clearly having great fun with every blood-soaked scene or prop.

Unlike films such as I Spit on Your Grave (1978, 2010) or The Last House on the Left (1972, 2009), which depict violence in its most raw and gritty form, VooDoo takes a more cartoonish approach to its extreme gore. Again, watching the film is like wandering through a neighborhood haunted house, filled with maniacal characters and gory discoveries. David M. Brewer’s cinematography follows Dani’s journey smoothly as she is subjected to one atrocity after another, showing us just enough of every grisly scene. Ruth Reynolds also turns in a worthy performance as Dani’s kindhearted cousin who suffers a malevolent transformation that serves as one of the climaxes of the film.

Voodoo debuts nationwide on VOD through Freestyle Digital Media on February 24, 2017. Be prepared for black magic of the darkest kind when this impressive film hits your screen.