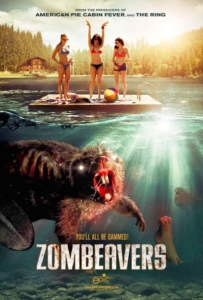 Horror is the only genre that can poke fun at itself and not be called a parody or a spoof. The horror-comedy is a genre all its own at this point, but it is not easy to pull off. One must know the genre well, have solid timing on the comedy, and know when to play up the horror.

The filmmakers behind Zombeavers definitely know both comedy and horror, and they execute these forms perfectly. The end result is one hell of a fun film.

‘Zombeavers’ starts off with a hilarious set up to create the zombie beavers (I won’t spoil it here) and is followed by a fantastic opening credit sequence that mixes live action shots with animation. It’s one of the coolest openings I’ve seen in a long time, and it’s the perfect set-up for the film that follows. 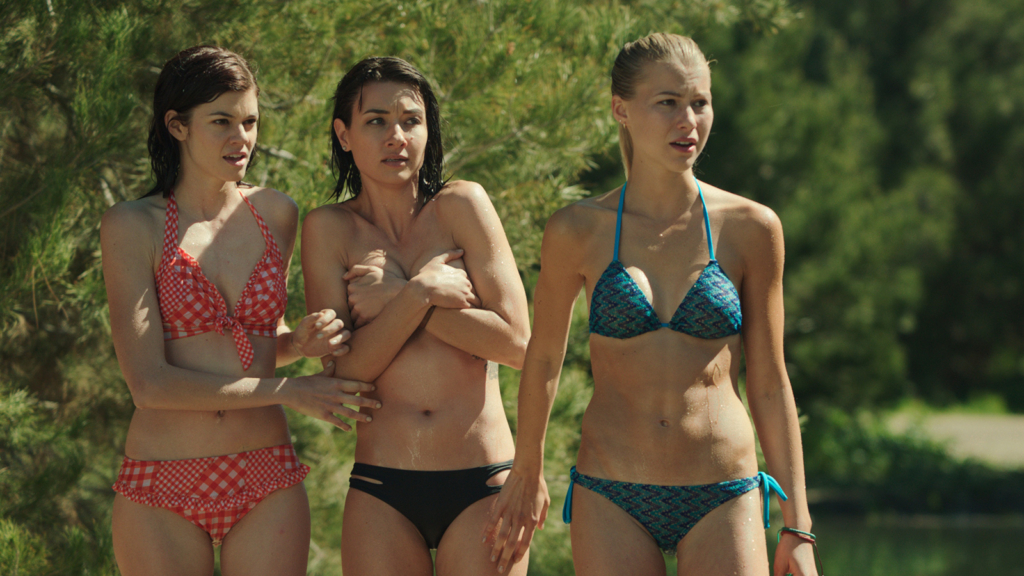 We are then introduced to three girls on their way for a weekend of fun at a lake house out in the country. The trio are very likable and come across as real girls instead of just characters to be chased and killed. They are naive without being dumb and have a playful chemistry among them. The dialogue is well written and sounds like real language, and I was invested from the beginning. Rachel Melvin is probably the standout among them. She has a real “girl next door” quality, and Cortney Palm has a fantastic comedic delivery.

A bit later in the movie, boys inevitably show up to crash the girls’ weekend getaway. While not as well developed, the guys are just as funny as their lady counterparts and also bring some extra story lines into the development of the group’s history as friends. I thought the little extra effort taken to establish some character depth and show how the group ties together as a whole and as friends was great to see. This isn’t always the case with horror, as we often are thrown a handful of stock characters that we don’t care about. The character relationships help make the characters that much more real amidst the seemingly impossible surroundings of zombie beavers. 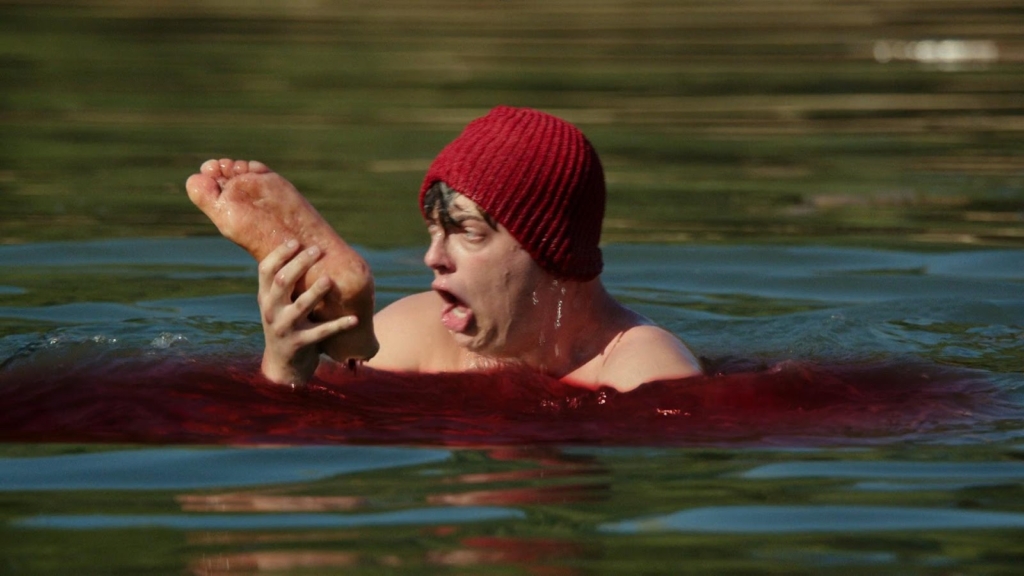 Obviously, the zombie beavers are an extremely important element in the film, and their appearance and technical execution could make or break the production. If they are lousy CGI, will they be believable and accepted? What do zombie beavers even sound like? How do they move? Luckily, the filmmakers created the perfect zombie beaver for the film.

Everything about the world of the movie is ultimately believable, except the zombie beavers, of course. There are no over-the-top crazy backwoods hillbillies, and there is no wildlife expert in the group who knows just what to do. So would a slow lurking, quietly gurgling, bloody zombie beaver stand out much? No. There’s a saying that says if you’re going to lie, lie big. If zombie beavers can’t really exist, then lie big to make them real! 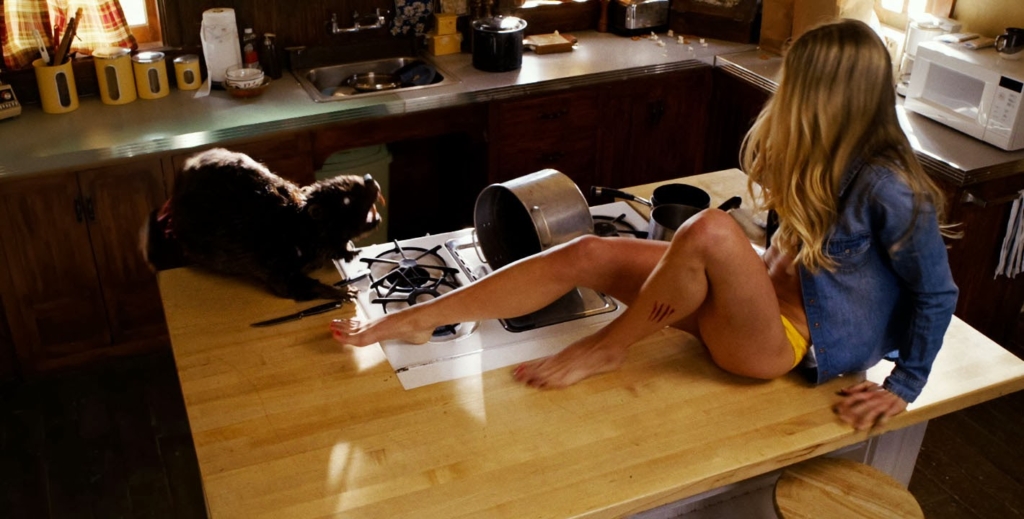 These practical effect zombie beavers are bug eyed, crazed, fast moving, screeching, relentless terrors — and they elicit real fear from our group of doomed protagonists. That is the main reason why this film works so much: it sets up the real world. So when the reality of zombie beavers is introduced into it, they are so absurd and over the top. Yet, they are met with serious fear from the characters, thus, the audience buys into it. If the characters take them seriously, so will the audience.

The music in the movie also helps create the humor filled yet serious tone as well. It quietly plays in the background and seems overly dramatic during touching or dramatic moments, while turning serious during frightening moments. This helps create that hint of something unbelievable lurking just around the corner. 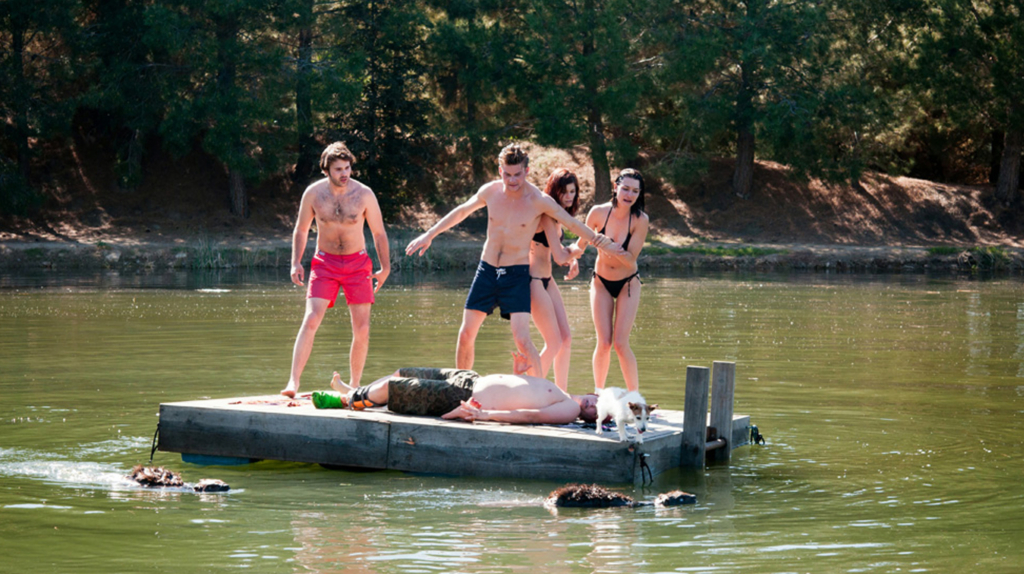 From the visual to the writing to the audio, nothing was missed by the production team. It all comes together for a fantastic, very funny horror story.

I definitely recommend Zombeavers. If you enjoy ridiculous horror comedies with plenty of blood and creative kills, you won’t be disappointed. Also, stick around for the Sinatra-esque Zombeavers song that plays over the closing credits. Classic.