Blumhouse teams up with writer/director Owen Egerton to bring us a suspenseful story about the idea of imaginary friends, social media and urban legends. 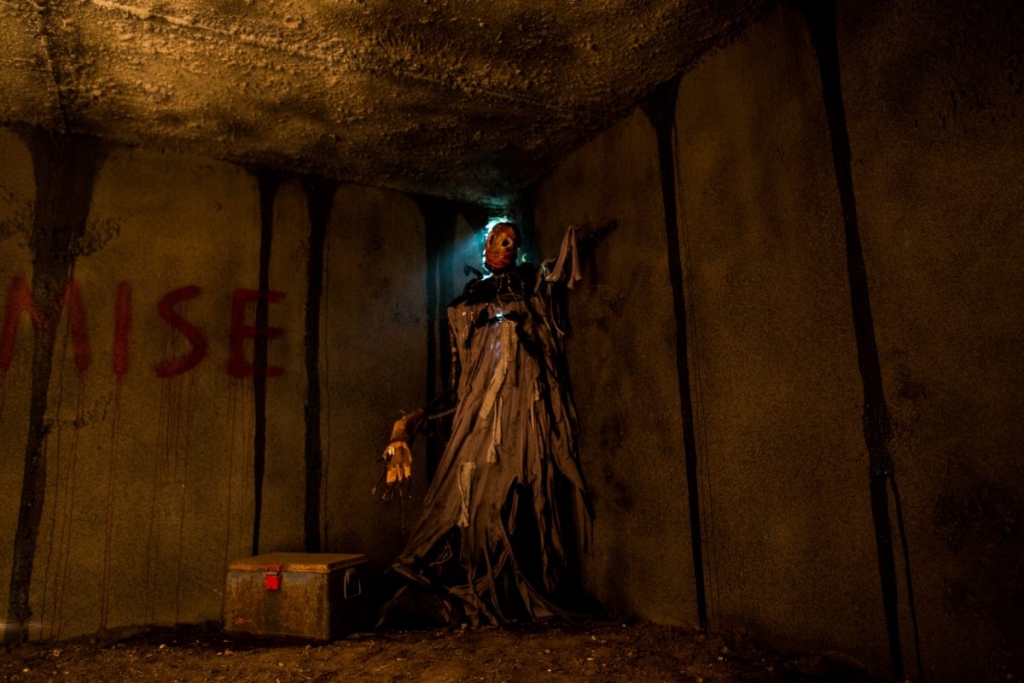 Mercy Black is a terrifying new monster who helps take away the pain from sad and damaged children — for a price. Steller performances from the leads and an amazing twist ending make this a terrific film for followers of urban myths.

Netflix has a whole string of horror films on their site, but I have found many of them to be pretty bland. When they get a good one though, I am compelled to share it, because that’s what I do. Mercy Black, the latest film from writer/director Owen Egerton, is a disturbing thriller with a story that can be looked at a couple of different ways.

Is the woman in the red mask a shared hallucination between some vulnerable and very naïve young girls? If we believe in something enough, can it really come true? Or is there an actual demonic entity out there named Mercy Black that makes kids do unspeakable things to give her life, in order to stop their pain? Her legacy is that she is a type of guardian angel. She seeks out sad kids and takes away what hurts them — for a price. Is Mercy Black the new Momo? 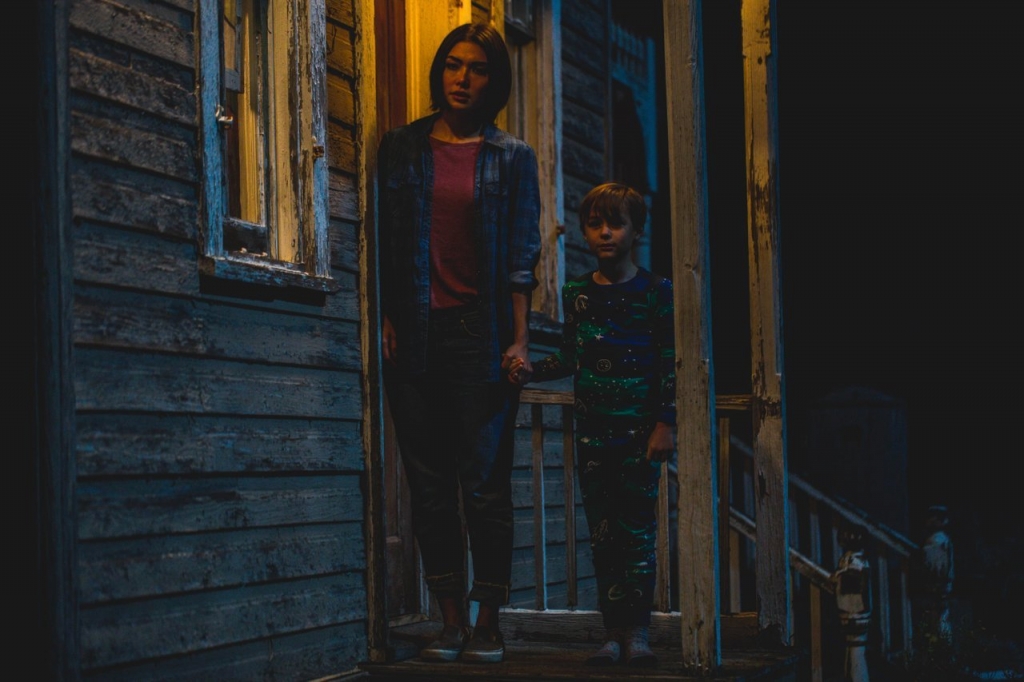 Mercy Black appeared at 12:01 AM on a Sunday morning, with only some vague mentions on social media that Blumhouse had a surprise for us on Netflix. At one minute after midnight, the film appeared in the lineup, reminding me a lot of the way Reddit tales are posted. A “true” story that is scary as hell, having elements of the supernatural, and the kind of monster that can become an urban legend.

With a similarity to the Slenderman story and the viral Momo Challenge, the film reaches out to our deepest fears of the childhood imaginary friend who we become dependent on but turns out not to be such a good friend after all.

The film begins 15 years ago, with three young girls Rebecca, Marina and Lily, walking across a field singing “Itsy Bitsy Spider”. That’s creepy enough all on its own. As we watch, one of the girls gets hit in the head with a rock and eventually dragged away by the two remaining girls. Rebecca and Marina are put on trial for what they did to their friend Lily. Young Marina admits to the crime and is incarcerated in a mental health hospital for doing what she says she was told to do, by a creature named Mercy Black.

Jumping ahead, 15 years later, Marina (Daniella Pineda) is having her final visit with her therapist Dr. Ward (Janeane Garofalo) and is informed she is well enough to go home. Scared, but comforted by the faith that her doctor has in her, she gets picked up by her sister Alice (Elle LaMont) and leaves her comfort zone to live again in her family home. 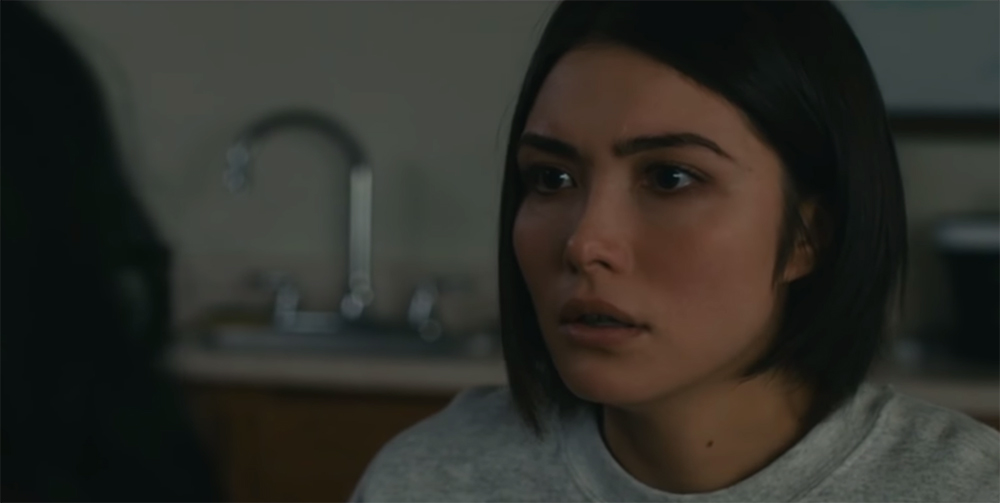 After arriving at the house she grew up in, she finds out that the past is not something she can forget or walk away from. My first thought was that she should have gone somewhere where no one knew who she was and get a fresh start, but then there wouldn’t be a movie, would there?

She finds out quickly through Alice’s jerk of a boyfriend Will, (Austin Amelio – The Walking Dead) that Mercy Black went viral, and there is no getting away from her. Ever. Her sister told her young son Bryce (played incredibly well by Miles Emmons) that she went to art school all this time. But of course, Marina’s intense little nephew is going to get up to speed fast.

With continuing nightmares of what happened, Marina, for better or worse, decides she needs to revisit everything so that she can piece the story together for herself. The only way to deal with the trauma is to face it head on. What really happened that night is still partially a mystery to her, too. She follows the clues that she remembers from a little jingle: A house you cannot see, a book you cannot read.

The problem then becomes Bryce. Having perused the internet at the library (with help from creepy librarian Mrs. Bellows played by stand-out Lee Eddy) about who and what Mercy Black is, we see the change in him. He is hurting because his father left. With a little pushing from Mrs. Bellows, the little boy starts to lean towards the same “guardian angel” that the girls did 15 years ago. There is no way this can lead to a happy ending, and no one is safe. Marina needs to find out what is going on quickly if she is to save Bryce.

WHY YOU SHOULD WATCH 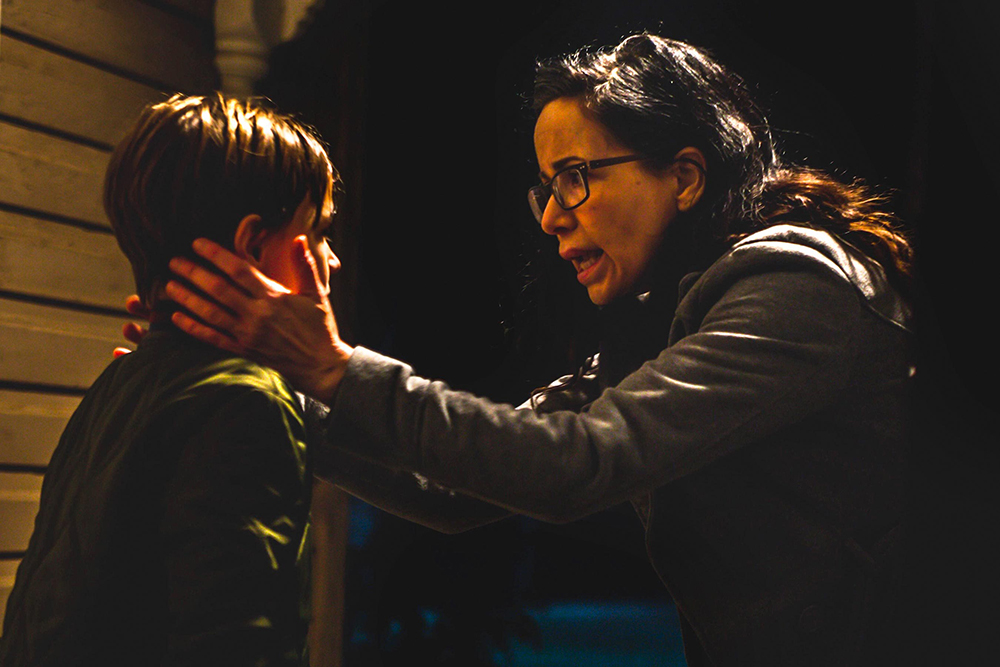 Mercy Black is obviously low budget but has a terrific dark and creepy aesthetic. The attention to details like the internet sites about Mercy Black with all kinds of crazy drawings, stories of copy-cats and fan-fiction are very genuine looking. I love Owen Egerton’s quick cameo in a YouTube video, ala Alfred Hitchcock. In addition, the stellar acting from leads Daniella Pineda, Miles Emmons and Lee Eddy just made the movie work.

The film builds the suspense gradually, with the help of dark lighting, ominous music, jump scares, the usual bumps in the night of an old house, and people from town who harass and threaten Marina. We don’t know whether Mercy is real or not until the very end, and I was amazed that I could not see ahead what the finale would be. Who should we really be afraid of? The end was a true surprise twist and I’m still pondering over it.

Overall, Mercy Black is a character study of the human condition and mental health.

People can be cruel, and we all have different ways of dealing with that. Children who suffer, and are not believed by the adults around them, can create a fantasy world that protects them. Can these fantasies take on a life of their own? Whether real or imaginary, Mercy Black has life simply because if you truly believe in something it gives that thing power. Monsters grow in the shadows and become as strong as we let them.

I think Owen Egerton and Blumhouse are a good fit. Mercy Black was a very entertaining film. I hope to see more projects come from this team. You can find Mercy Black on Netflix and other VOD now.