A clever script and stellar cast help elevate “The Samaritans” above its budget limitations, resulting in a smart and entertaining indie horror / thriller. 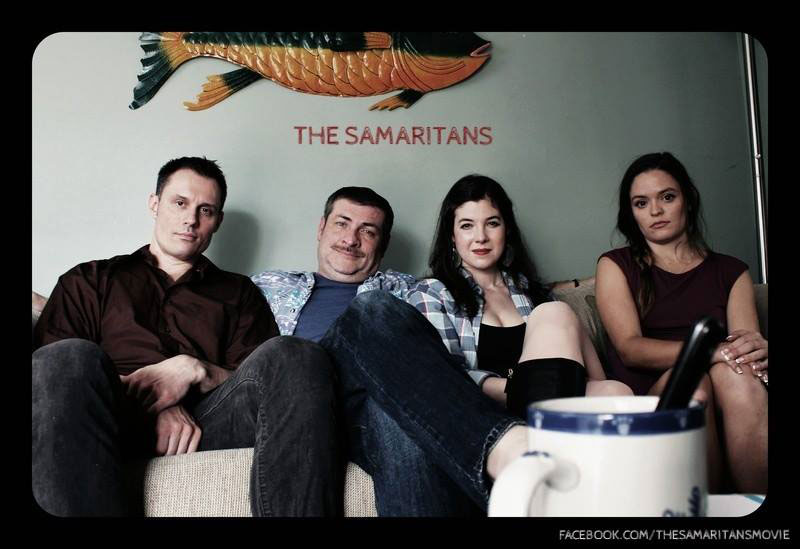 I recently wrote about my anticipation for a new micro-budget indie horror film called The Samaritans, and the filmmakers were kind enough to send me a screener ahead of the film’s April 16th digital and VOD release via Viva Pictures.

I was immediately intrigued by the film’s unique premise. One by one, three co-workers arrive at the modest home of their manager Frank (Keith Collins) in a small coastal town to finish a proposal for a new app they are all working on. Up until this point, they have been working as a virtual team, never having met face to face. First to arrive is the polished and professional Rosie, the copywriter for the team (played by Annelise Nielsen). She’s hesitant to go inside, although we soon learn it was her idea to bring the group together for their first face-to-face meeting. We sense her hesitation has to do with an old friend who used to live in the neighborhood, one who died some time ago.

Next to arrive is the bubbly, free-spirited social media manager, Daisy (Timothy Laurel Harrison). Finally, they are joined by Eddie (Doug Bollinger), the somewhat abrasive, button-pushing marketing manager and elder of the group who remarks that he used to surf at the nearby beach when he was younger.

Immediately, the group starts to click, and the ideas pour out as the team toasts to their future success — reveling in the brilliance of their virtual spin the bottle app. But a disturbing noise from the basement breaks up the party, along with Daisy announcing that she can sense a spiritual disturbance. Moments later, they each pass out and later wake up in the basement, tethered to chairs by an unseen force that keeps them immobile.

As they try to figure out what’s going on, the green bottle on the table in front of them suddenly starts to spin, landing in front of Daisy. Her body is consumed by an icy cold presence, and then she’s no longer Daisy but rather some unknown entity with a clear grudge against Eddie. The possession lasts only briefly before the bottle spins again, landing on each team member one by one — revealing a new personality and new grudge against one of the other members of the group.

As the encounters with the spirits become increasingly violent and menacing, the group frantically tries to find ways to combat the dark forces working through them, while simultaneously trying to solve the mystery of who these spirits are and what they want from each of them.

The rest of the film plays out like a mystery thriller, as more and more pieces of the puzzle are revealed, and we learn the truth about each person’s troubled past. It’s somewhat reminiscent of SAW, with the characters (along with the audience) on a mission to try to figure out what connection they all have to each other before it’s too late. The film is a taut 76-minutes that wastes no time getting into the meat of the mystery and quickly ramping up the suspense and intrigue. A smartly written script and clever execution reveal important clues while letting us get to know and become invested in our characters. I was immediately sucked in and anxious to learn more about what was happening and why.

The Samaritans is made all the more noteworthy by the tremendous resourcefulness of the filmmakers and the impressive use of a very small budget.

The entire film was made by six people, including a cast of only four characters. Every scene was shot in just two rooms, with the bulk of the film taking place in a single location. In spite of that, the compelling story and great character dynamic keep the film from ever feeling remotely boring.  The actors do a fantastic job carrying the weight of the film on their shoulders, and the performances are all quite believable and multi-faceted.

The film relies almost exclusively on natural lighting and practical effects, and it looks quite good. This isn’t a film that relies on gore or jump scares to titillate the audience. In fact, there’s very little blood to speak of. Instead, we get an intense supernatural mystery about retribution, regret and karmic justice that’s surprisingly effective and highly entertaining.

I should note that I always try to watch films at least twice before reviewing them. Upon my second watch of The Samaritans, I was excited to discover that there are several clues to the mystery presented early on that passed right by me on my first viewing — visuals and subtle character cues that are easy to miss but really enhance the viewing experience once you know to pay close attention.

These clever touches just reinforce how intelligent the script is and how thoughtfully executed this film really is.

The Samaritans was written and directed by Doug Bollinger, who also stars in the film, based on a story by co-star Keith Collins. Be sure to add this film to your watch list when it lands on digital and VOD next month.