Delighting audiences on the festival circuit, the entertaining and well made “Puppet Killer” is a horror comedy destined for cult classic status. 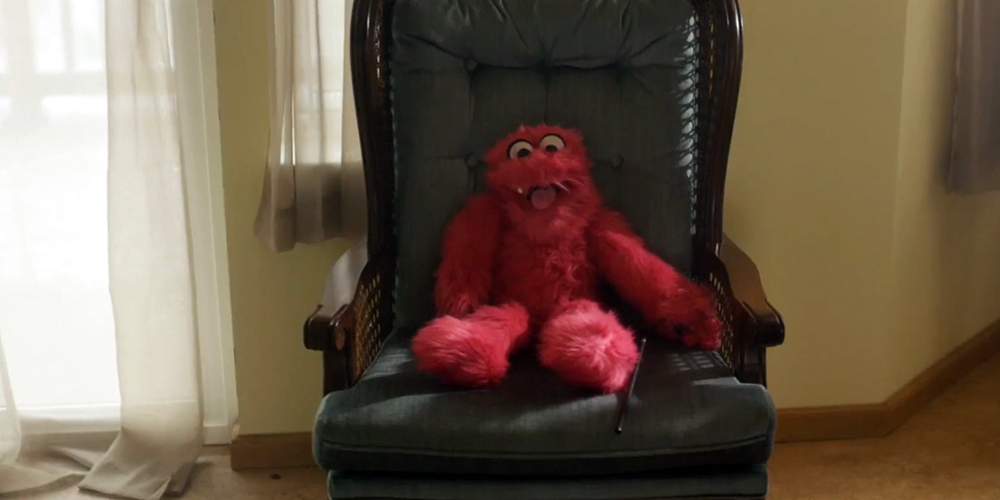 One of the most original and entertaining Christmas horror-comedy films of recent memory, Canadian filmmaker Lisa Ovies’ Puppet Killer, achieves the perfect blend of laughs and slasher nostalgia — all while featuring a psychopathic snaggle-tooth pink puppet named Simon.

A talented cast of adults playing the roles of teen slasher film stereotypes succeeds in creating witty, likable characters that charm throughout.

Shortly after a family fight, Jamie’s stepmom goes missing, and he’s convinced that Simon killed her. Years later, Jamie and his high school friends decide to celebrate Christmas at Jamie’s old cabin house where Simon is discovered in a box in the basement.

Strange occurrences unfold, and Jamie is once again convinced that Simon is on a killing spree as friends go missing and the bodies pile up. But unexplainable coincidences deepen the whodunnit slasher construct, as not to reveal any spoilers.

Like most of the best horror films, Puppet Killer relies upon clever practical special effects (and legitimate puppeteering work) and great setups.

Most of the kills are conducted on screen, basking in the viscera and gore, which should satisfy even the pickiest of gore-hounds. The film also captures that difficult to recreate, authentic, 80s slasher aesthetic courtesy of cinematographers Graham and Nelson Talbot, a dynamic twin brother duo who shot the production on a RED Dragon DSMC2.

The world premiere of Puppet Killer occurred in September 2019, and within a month, the film screened on five continents and has racked up an impressive 46 nominations and wins.

“My biggest surprise was that about half of them [nominations] were at non-genre specific festivals. People have really embraced this film, and I could not be more grateful,” Ovies revealed to Morbidly Beautiful.

The nominations and wins should not come as a surprise.

Puppet Killer enjoys all the right ingredients for an instant cult classic, if not its own successful franchise, and marks a significant contribution to the independent horror film scene.

“I hope our successes inspire more studios and financing platforms to support independent horror. I am constantly told it is the hardest thing to get funding for, specifically in Canada. I hope we can be part of that change,” Ovies noted. She went on to add:

“I also hope it opens doors for female filmmakers and LGTBQ+ representation. Over 50% of our above the line crew identify as LGTBQ+ and with a female director and three of our five producers female, I think we proved it can be done, and done well when you give equal opportunity to the insanely talented humans out there.”

Puppet Killer is currently still touring the festival circuit and should be available for wider distribution later this year. Stay tuned to their Facebook page for more news on screenings and release information.