Beware the Halloween Tree: Root of All Evil has macabre fun with an ancient pagan tradition 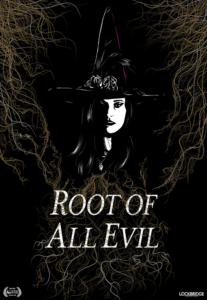 Written, directed, and scored by Alex DiVincenzo (The Horrors of AutoCorrect, Trouser Snake), the short film Root of All Evil is a comedic, lighthearted horror romp about one deadly Halloween night and the dangers of witchcraft and folkloric traditions.

Dressed in various costumes (a devil, a pirate, a football player, a French maid, and so on), a group of likable friends has gathered for a celebration of all things macabre and spooky. One of the friends, however, takes the evening festivities a bit more seriously than the others.

Decked out in traditional witch’s garb, she explains to the group about the legend of the “Halloween tree,” one of which she keeps on the coffee table right in front of everybody. Although the friends dismiss the tree as being merely inspired by a Ray Bradbury novel, the “witch” explains that the origins of the Halloween tree are deeply connected to paganism, Samhain, and the worship of nature. She encourages her friends to treat the tree with respect, but naturally they refuse to listen…

As the role of karma in our lives begins to take shape in the movie, one by one the characters suffer at the vicious hands — or branches, as it were — of the Halloween tree.

The suspense and gore sequences are all the more impressive when one considers that Root of All Evil was created for the Providence 48 Hour Film Project, in which participants are given 48 hours to conceive and produce a completed short film based on specified requirements. Root of All Evil scored big in the competition, winning Best Film, Best Ensemble Cast, Best Special Effects, among other awards.

The movie is just over 7 minutes long, so describing more of the plot will give too much away — but this is a witty, well-made, and effective short film. An early scene involving one of the branches of the Halloween tree and a victim’s fingernail is stomach-turning horror at its best, while the inability of the characters to use their cell phones to call for help is cleverly integrated into the plot.

The tongue-in-cheek humor and the playfully ghastly deaths in Root of All Evil reminded me of Creepshow and comic-book horror in general.

Though there is little time to get to know all of the characters well, they each stand out in their own ways. The “witch,” one of the highlights of the project, casts a menacing pall over the night’s violent events, making the ending of the movie fun and satisfactory. DiVincenzo and the entire crew (in particular, Neil Guliano, who helmed the cinematography and editing; and Jordan Pacheco, who tackled the special effects) are all to be commended.

Root of All Evil is brought to audiences by Lockbridge Productions and can be watched below or directly on YouTube.