Just in time for Halloween, the San Francisco Bay Area delivers three top-notch haunted attractions, each with its own brand of unique, signature scares. 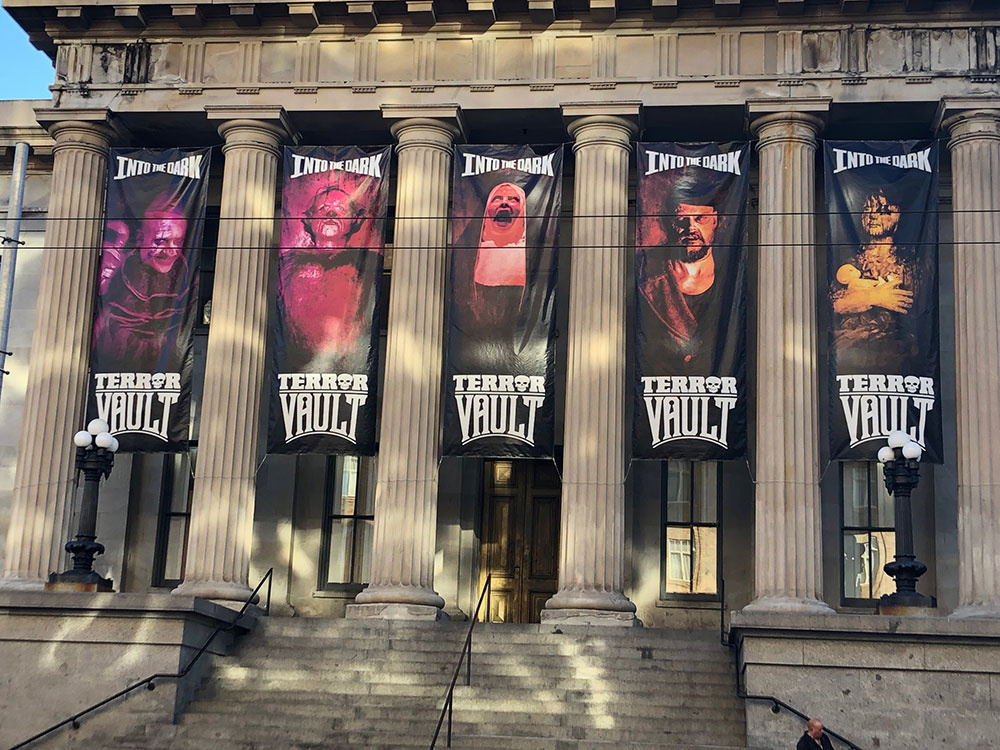 The exterior of SF’s historic mint building, home to the Terror Vault

A multi-storied landmark with a rich history of ghosts. A talented cast of exuberant actors who embrace their spooky roles to the hilt. A dark, funny, and playfully sinister journey through one depraved scene after another.

The latest haunted attraction to take over San Francisco’s bustling city streets during the Halloween season, Into the Dark’s Terror Vault is held inside the massive historic mint building on 5th Street, a grand setting for a night of eerie legends, cannibalism, deviant sexuality, and witchcraft.

Without question, Terror Vault should be on the calendar for all Bay Area residents looking for more than the average haunted-house walkthrough. 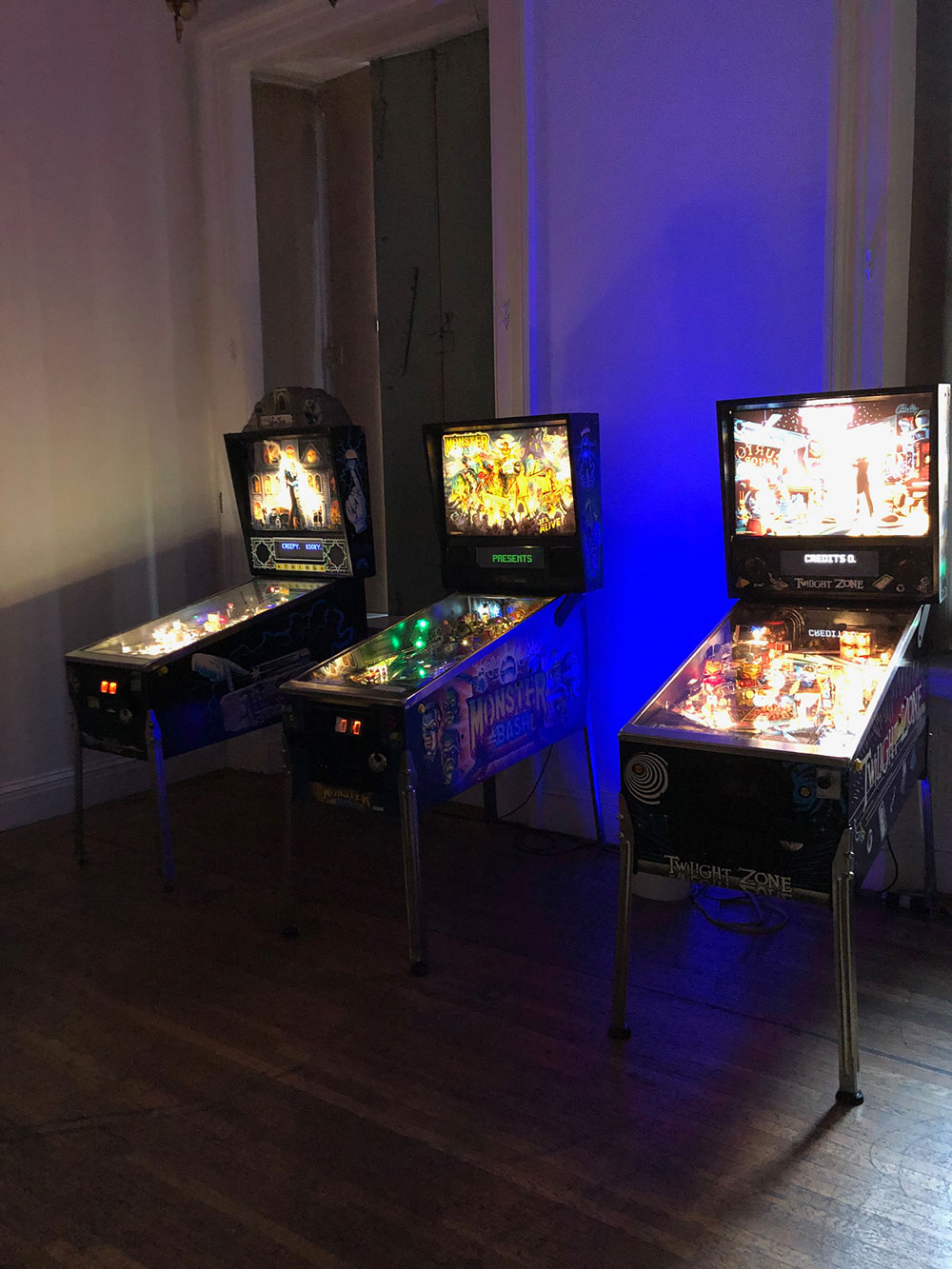 At the start of the attraction, visitors are given the choice whether or not they want to be (lightly) touched and groped during this fantastic immersive haunt, an option that definitely adds to the creep factor of the experience and lends a bit of the unexpected behind every cobwebbed corner and dusty stairwell.

The show, which lasts for approximately 45 minutes, unravels more like live theater than a traditional haunted house. Along the way, visitors will be treated to a number of icky tales, including those belonging to a libidinous brothel owner, a deranged surgeon, a cannibal hillbilly, and a cruel prison warden. The set design adds a vibrant, cinematic quality to every scene, while the makeup of the actors and the occasional special effects all contribute to a fully engaging and interactive evening.

Audience members may be briefly separated from the group to undergo a more personalized horror scene, while others could be subjected to an interrogation or eating something wet and chewy.

Prepare to dine with cannibals, summon witches, fraternize with knife-wielding femme fatales, and even endure a modified escape room. 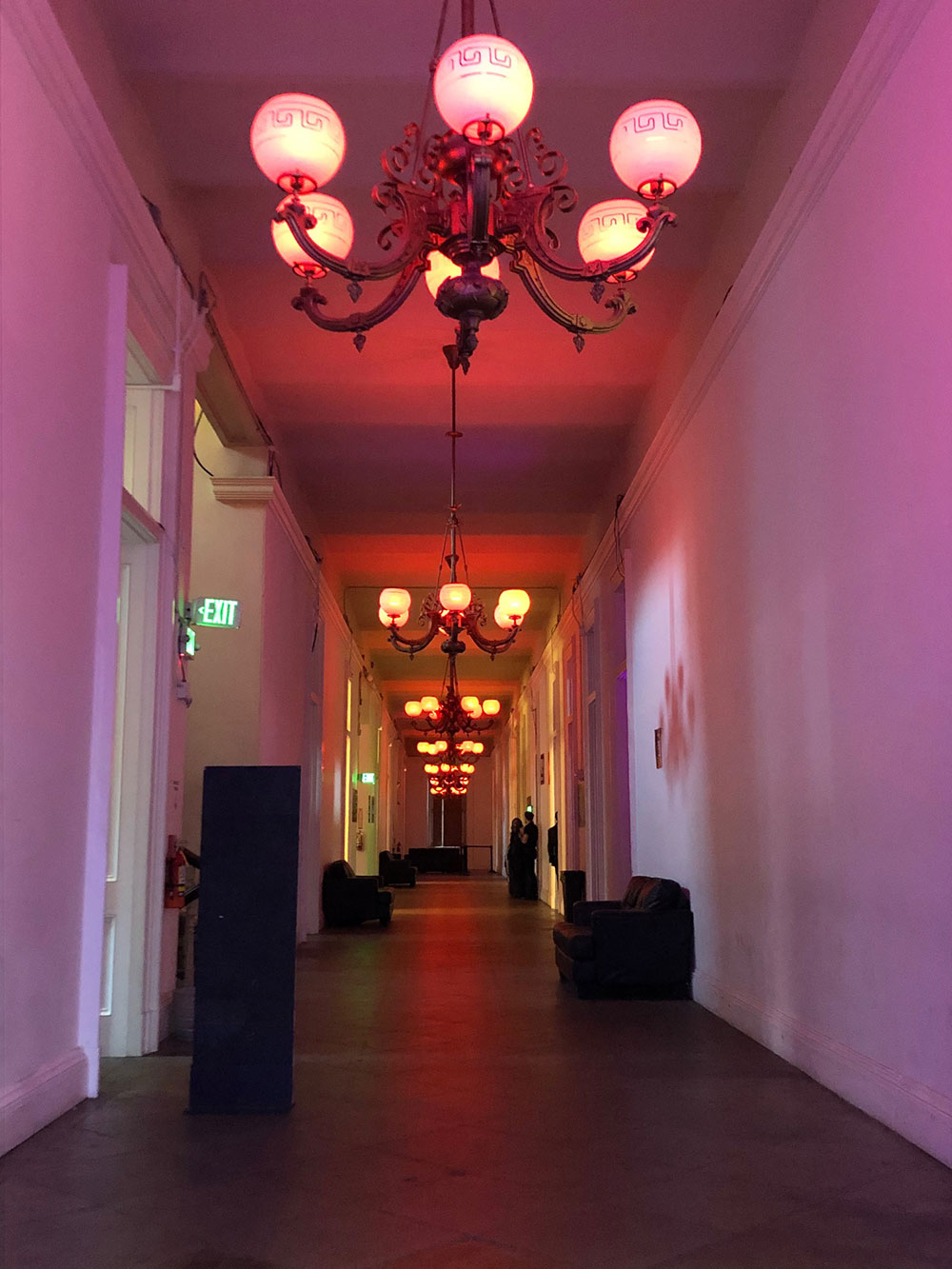 The spooky corridor leading to the Terror Vault

But despite the diabolical atrocities that unfold in Terror Vault (including a few scenes of the X-rated variety), the main objective is for every participant to have a great time; this is not an extreme haunt designed to make visitors feel uncomfortable or unsafe.

Every member in our group had a blast interacting with the cast, listening to their stories of terror and madness, and following their creepy instructions to ultimately escape “the vault.” Even the physical touching was done respectfully and safely — but if you’re ticklish, you might want to be careful! Afterward, in the corridors outside of the haunt, participants could also visit a bar, a gift shop, and even a horror-themed pinball arcade.

Morbidly Beautiful highly recommends Terror Vault, an over-the-top haunted attraction and live theater rolled into one, and a most welcome addition to the steadily-growing genre of immersive experiences in the San Francisco Bay Area. 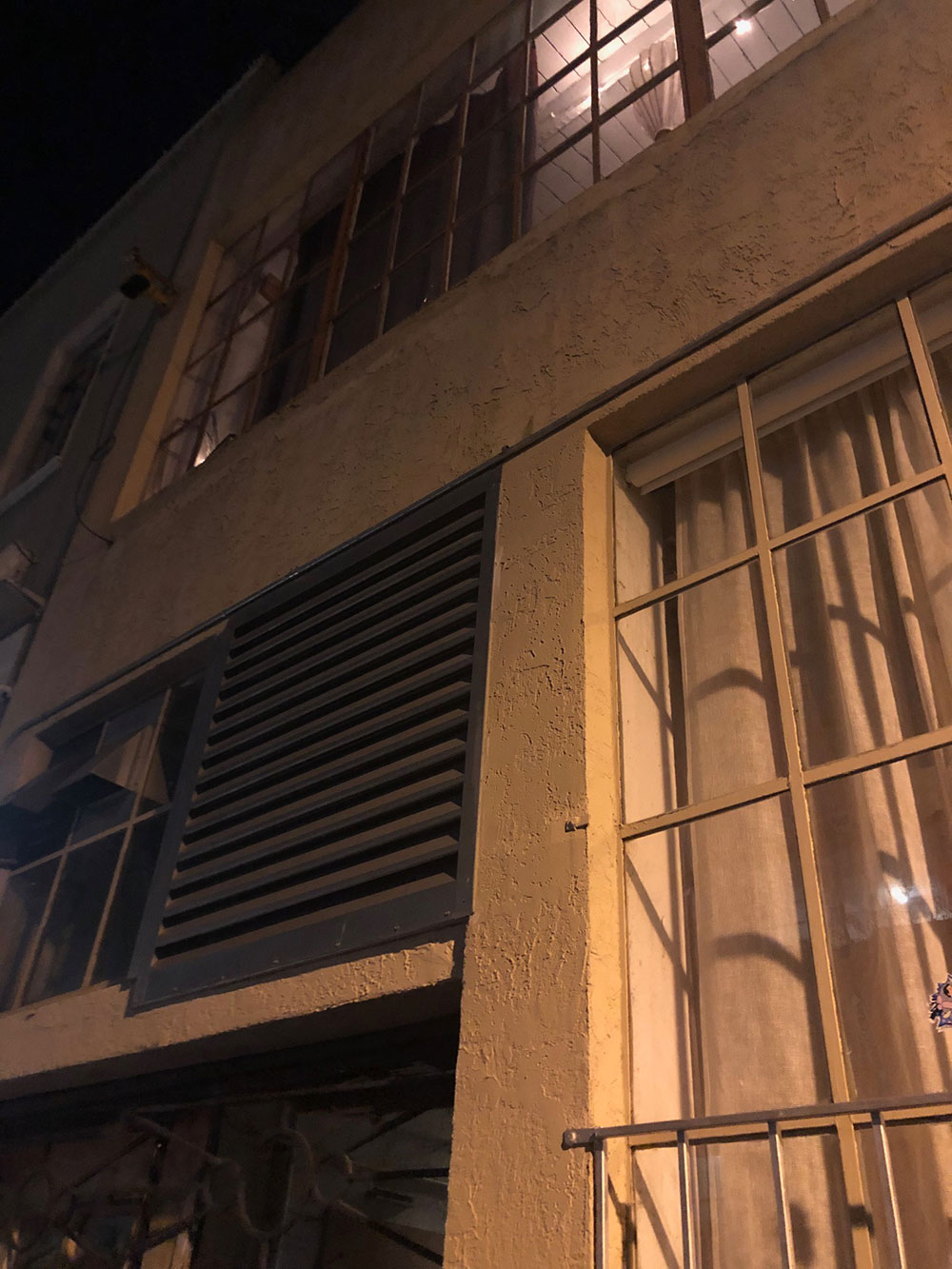 Up next is The Cellar, a theatrical haunt located in the Mission District of the city. An air of mystery and intrigue surrounds this experience, as visitors are only provided the address of the location after purchasing tickets. Housed in an unassuming building sandwiched between darkened apartments, The Cellar requires that all guests sign a waiver before entering. In a creative and eerie twist, the haunt actually begins outdoors on the street, as a ghostly, creepy-looking woman beckons the group to follow her to a private door around the corner.

From there, this haunted attraction involves dark, cramped spaces, scenes of the occult, laboratory experiments gone grotesquely wrong, and some audience interaction with the small cast of actors.

Although not as scary as the waiver let on, The Cellar makes excellent use of its space, requiring guests to crawl through total darkness while demonic screams torment them from all directions. 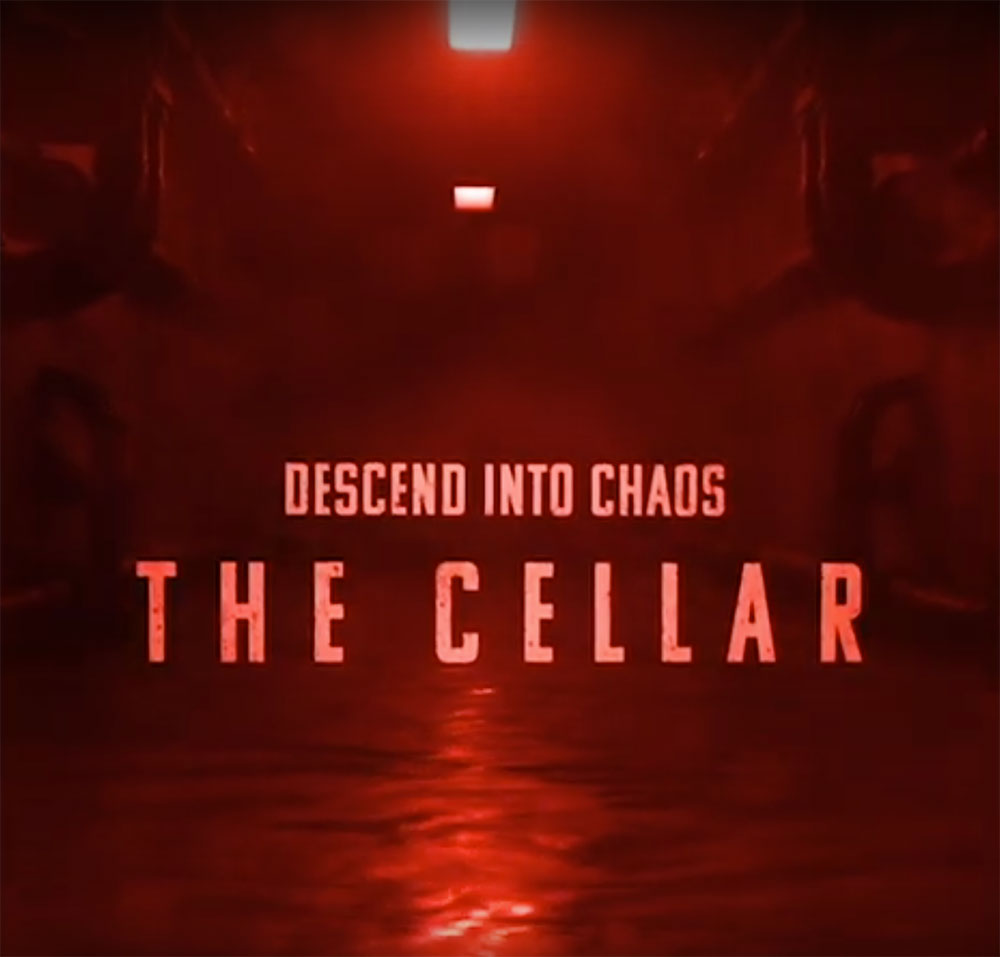 Probably the most bizarre moment comes when visitors enter a kitchen operated by a ghoulish chef with a Joker-like, all-knowing grin. Will you choose to ingest what she offers you from that blood-soaked glass? How about from a bowl that appears to be squirming with insects and bugs?

As The Cellar reaches its climax, a red-neon exit sign promises freedom at the end of a long corridor. But what will visitors have to endure in order to reach it?

Although information online appears to be limited, The Cellar is the spooky brainchild of Shelli Frew, an author and playwright in the Bay Area. Here’s hoping Frew and the rest of her talented cast and crew will continue to deliver frightening Halloween experiences to San Francisco and surrounding areas. 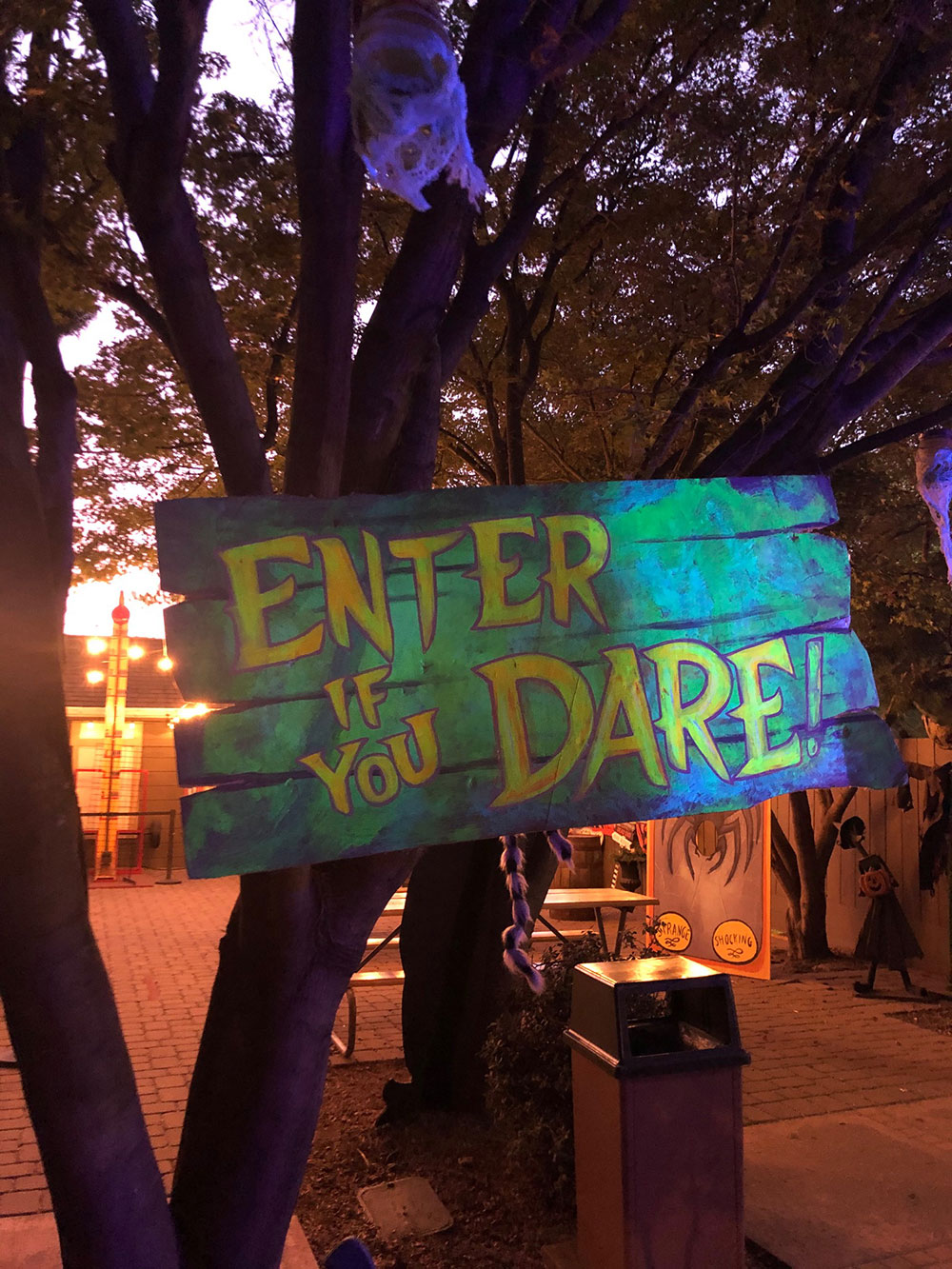 This trio of haunted attractions ends with a special, big-budget event held inside the dimly-lit hallways and cursed rooms of San Jose’s very own Winchester Mystery House. Billed as an immersive horror experience, “Unhinged” guides visitors through the winding staircases of the famous estate, stopping in many of the rooms to witness scenes of terror, suspense, and mystery.

“Unhinged” is an exceptional holiday treat for haunt fans. The costumes, makeup, set design, and special effects are all outstanding (highlights include a scene involving a dead woman submerged in a bathtub, a room blazing with fire, a dancing zombie couple, a pair of taunting female twins, and an elderly woman who talks to spirits).

For a haunted attraction on such a grand scale, “Unhinged” refuses to fall victim to the problems with attractions that draw large crowds.