Event Recap: The Shadow Over Lovecraft

Miskatonic Institute presents a scholarly and deeply compelling panel discussion on H.P. Lovecraft’s well-documented racism and its effect on his legacy. 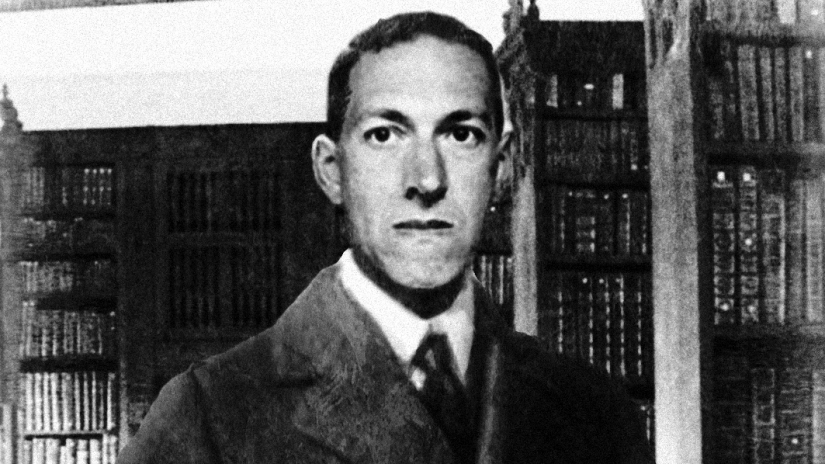 Accountability is the name of the game. In today’s nature of cavalier condemnation and labeling based on disagreements, it’s easy to strike your fingers across a keyboard and call someone a disparaging title such as bigot or racist, whether it’s true or not, and hope that the media amplifies the memetic value of a single tweet.

What happens when the subject of that ire is a legendary icon of horror that literally thousands of disciples have ventured into the world of to explore the literary playground he developed, and was also a self-professed and proud bigot, racist, xenophobe, anti-Semite, elitist? Do we build a mountain of madness and stage a book burning? Do we try to erase his work from history? I am of course talking about the man who molded The Cthulhu Mythos; H.P. Lovecraft. 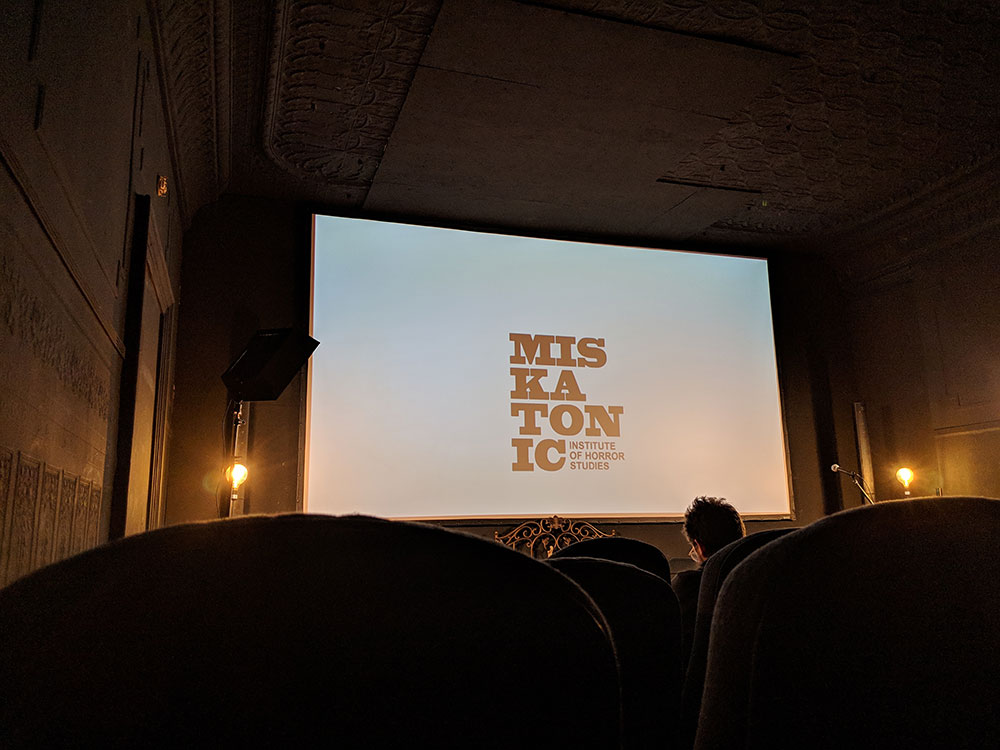 The good folks at the Miskatonic Institute of Horror Studies (despite the name, it’s not solely focused on the Man in question) decided it was time to dissect the problematic nature of everyone’s favorite cosmic world builder’s politics in relation to his salient body of work.

Is it ok to lionize Lovecraft if he was hateful to the majority of humankind? They asked the question by assembling a panel of Lovecraftian experts, people who have written not only about Lovecraft, but gamboled in his universe. “The Shadow Over Lovecraft: Interrogating H.P. Lovecraft’s Racism” was held at their New York City location at Film Noir Cinema in Brooklyn. MC’d by Rodney Perkins and featured instructors Victor Lavalle, Peter Cannon, Ruthanna Emrys, and Matt Ruff.

The night started off with Miskatonic founder Kier-la Janisse, who told the charming origin of the institute. 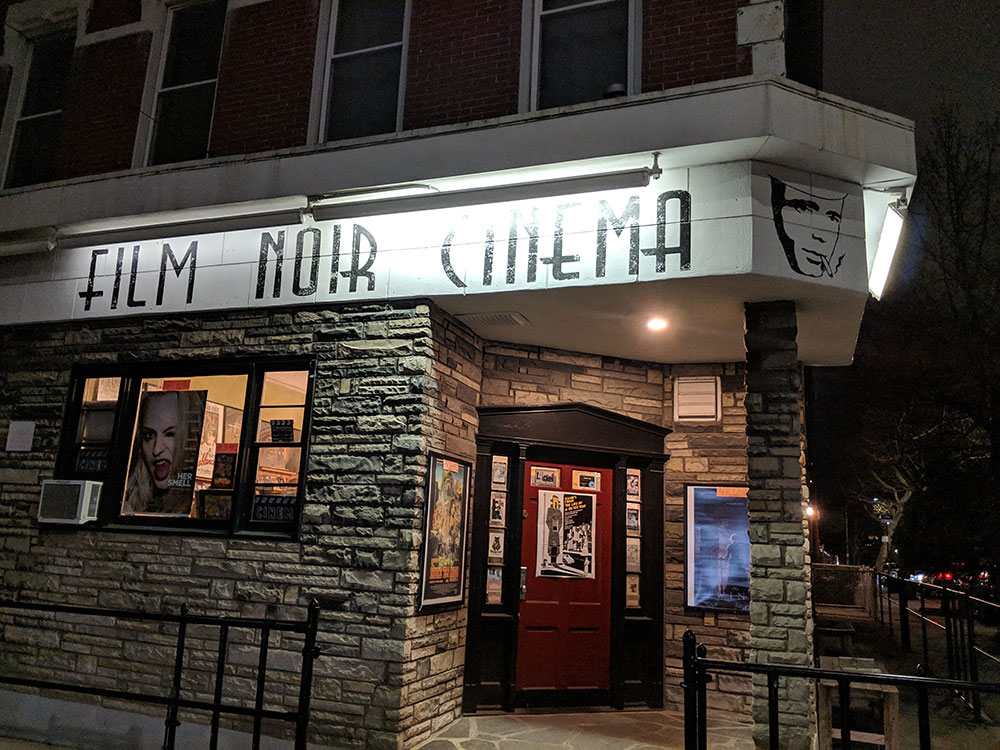 It started in Winnipeg Manitoba, with her providing a writing workshop for teenagers. It blossomed into weekly classes once she owned a venue in Montreal and was able to control the schedule more. Now with locations in London, New York and the most recently opened Los Angeles Venue, Miskatonic offers monthly classes with industry professionals and experts that honestly is just downright fascinating. It’s the kind of respect and careful analysis the horror genre truly deserves.

Kier-la explained why the institute, which she admits has fetched questioning about its relation to a known racist, is named as such. It’s an innocent story of wonder and childhood nescience. She believed, as a frequent runaway and truant, that Miskatonic University was in fact real. It inspired her to return to school with the hope of attending said establishment. A comedic call to information led her to discover the school had not emerged from the pages, so she used the name to create her own.

Superficially, it may seem the topic at hand is addressed to exonerate the character of the institute. But it’s exceptionally clear to me right away this is being handled with a high level of respect and responsibility.

The panel includes a rank of scholars rather than horror fanatics. 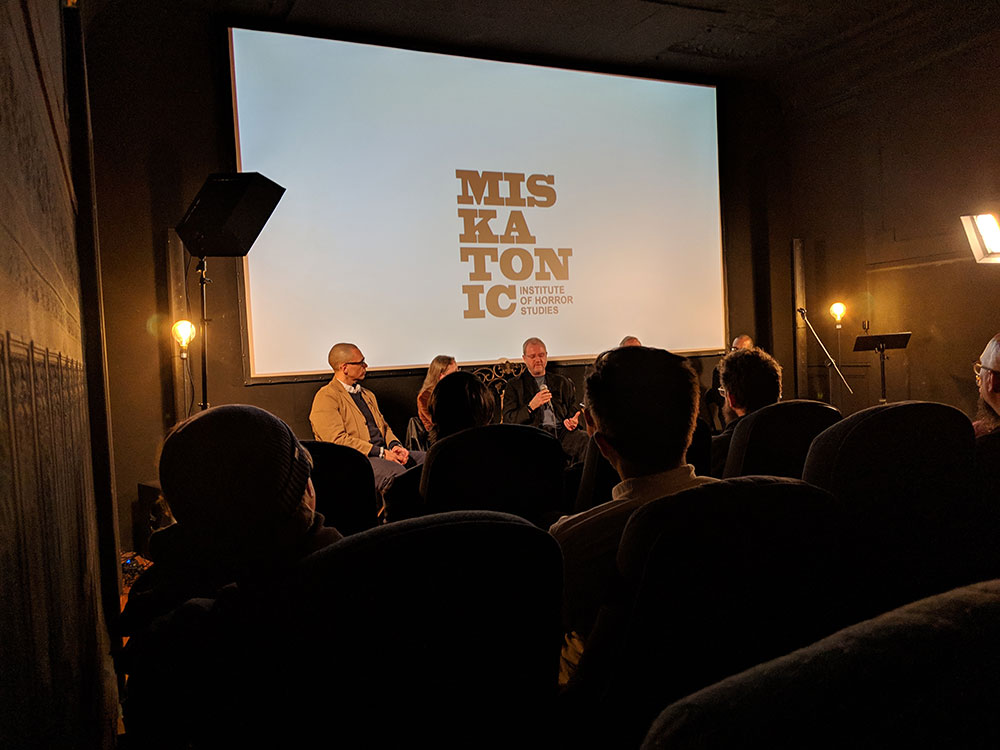 Rodney Perkins begins the proceedings with an introduction of Lovecraft. His general obscurity during his own lifetime. His transformation from Conservative to “New Deal Liberalism”. The birth of his cult-like status, which Rodney says even in the 1980s was barely noticeable. Finally, and remarkably his tendril like reach to real science, with a sea cucumber recently being named after Cthulu.

Veneration aside, it’s time to deal with the controversy of Lovecraft. Victor is charismatic and genuine. He looks every bit a professor at Columbia (which he is) but speaks as honestly and relatable as a fellow enthusiast at a Horror convention. He says his journey with Lovecraft started around 11 years old, when he found the Dell paperback’s which featured comic book-like covers. His comparison of his own recognizing of Lovecraft’s racism to realizing a beloved family member is seething with prejudice is simplistically brilliant.

He speaks of his naivety even in the face of blatantly racist characters (see the Cat in “The Rats in the Walls”), and the eventual confrontation he had to face as a teenager and young man with the inability to reconcile the detestable views regardless of literary value.

Victor brings this up, and he’s not the only one of this panel to do so, but Lovecraft was hardly the only racist, then or now. Saying his views or actions were “Of the time…” makes him feel like “Everyone sucked at the time.” and he offers the audience a chance to look at their own ancestors and question whether they had such regressive views. The past is abhorrent with prejudice. Even the regaled General Patton was a frothing anti-Semite that no justification such as “…but he was a brilliant military strategist” could erase.

We acknowledge, condemn, perhaps even abandon as Victor did with Lovecraft’s work for twenty years or so. Until one day, fortunately stuck in the flow of creativity, he decided to pull Lovecraft back down from the shelf and reimagine what is considered his “most racist” entry: “The Horror at Red Hook”. Victor took a weak story and repurposed it with a black protagonist in the 1920s. A reclamation, as if he took the positive qualities of a parent and shed the faults to make an improved progeny.

He felt Lovecraft’s description of Brooklyn was poor and told as if he was an outsider, although he lived there for a time. It rings true if you dive into the source, and it’s a great parallel to Xenophobia in general, not understanding that which you speak of. Angered with the current state of Black and Blue affairs, he chose the settings of the 20s to surreptitiously discuss current events. 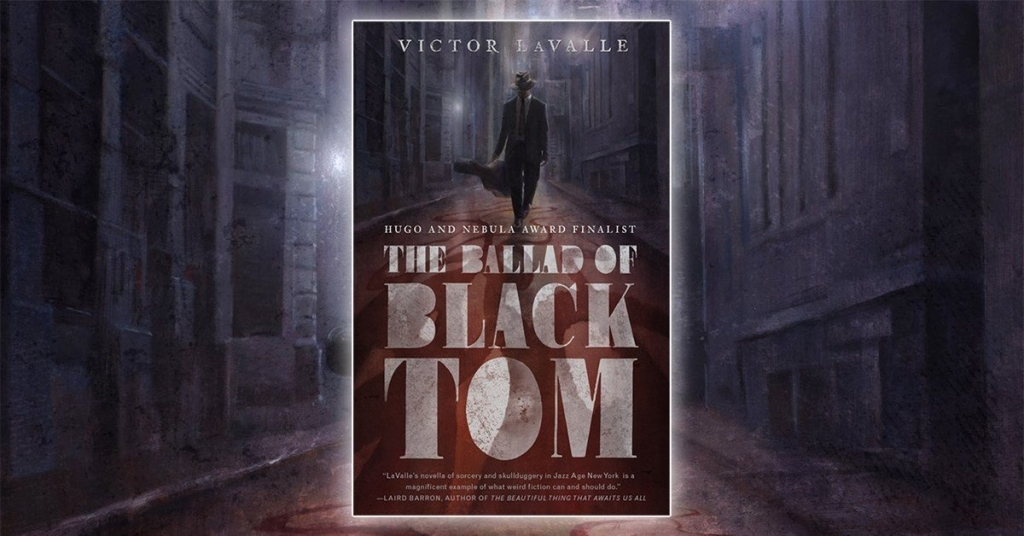 Victor makes a quality collation of Lovecraft’s outcast sentiments to Chris Claremont’s brilliant run as writer on Marvel’s X-men. Although a sizable faction of the readers may agree that it’s an allegory for being Gay and unaccepted, there are plenty of people resistant to this analysis. It doesn’t matter, as Victor states “We’re all reading it together.”

The greater point: take what value you can out of the subject, but it does not mean you absorb every aspect as your own. 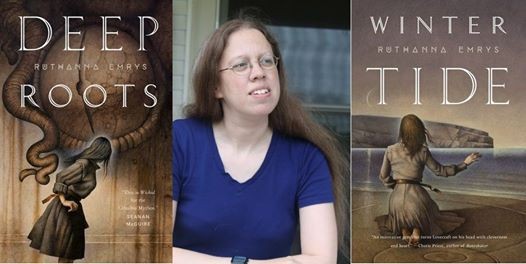 Ruthanna has an inherent n