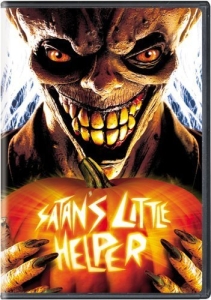 Writer-director Jeff Lieberman made a trio of low budget horror films more than twenty years ago that have gone on to become cult favorites (Just Before Dawn, Squirm, Blue Sunshine). The horror comedy Satan’s Little Helper (2004) marks his long awaited return to the genre. Despite a very small budget, he manages to deliver a highly entertaining and memorable Halloween-themed film that has an inventive plot and lots of wicked charm.

The film takes place on Halloween night. Young Douglas Whooly (Alexander Brickel) is a gullible boy who has trouble separating fact from fantasy. He is obsessed with a video game called “Satan’s Little Helper.” Wearing a devil costume inspired by the game, he’s on a quest to find Satan and assist him in all his violent acts. While strolling the neighborhood, he comes across a hulking man wearing a goat-horned Satan mask and arranging corpses on the front lawns of houses in broad daylight. Convinced he’s found the real Satan, he happily introduces himself to the creepy, mute stranger, and he offers to be his willing assistant.

The masked stranger happily lets the boy tag along, as he proceeds to embark on a night of murder, mischief, and mayhem. Douglas has a great time hanging out with the man he calls “master,” completely oblivious to the fact that he’s witnessing real death and destruction. The boy’s family is equally confused, believing this to be the sister’s boyfriend playing an elaborate charade. By time everyone figures out the truth, all proverbial hell as broken loose in the small town.

Lieberman approaches the material with a devilishly funny sense of black humor. This film has all the makings of a cult classic, featuring scenes that are both unnerving and horrific, while still being outrageous and hilarious. It pokes satirical fun at the belief that violent video games and movies breed stupidity and violent crime. All the while, the movie remains true to its horror roots and isn’t afraid to have a little sadistic fun.

The Satan character is truly inspired. Lieberman, smartly, never reveals if he’s just a homicidal maniac in a costume or genuinely Satan. As twisted as he is, he also has a playful and mischievous side. Joshua Annex plays the silent predator to perfection. Although he never speaks, his performance is a wonderfully dark pantomime that is pure joy to watch.

Katheryn Winnick is effervescent as Douglas’ sister. Besides being stunning beautiful, she delivers a strong and convincing performance. The casting of the wonderfully quirky Amanda Plummer as the mother is delightful.

The film doesn’t hold back from its shocking, tongue-in-cheek scenes of completely non-politically correct violence. Some of the “highlights” include a cat getting smashed against a wall and pregnant women, babies and blind men getting run over by shopping carts. There’s also a brilliant turn at the end of the film when Satan shows up dressed as Jesus Christ. The results are beyond chilling.

The film isn’t perfect by any means. It’s produced on a very low budget, and it shows. This direct-to-DVD feature doesn’t have the slick, Hollywood-produced look you may be used to. It’s a little too long and drags in parts. But, ultimately, there are way more hits than misses in this ridiculously fun, highly original and darkly demented horror gem.

Despite a low budget, this film boasts a solid cast and a darkly funny and highly original script. It’s as sadistic as it is hilarious, and writer-director Jeff Lieberman creates a memorable and entertaining film deserving of cult status.