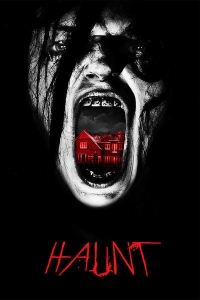 Cashing in on the popularity of ghost stories that scored big at the box office, including The Conjuring and Insidious, Haunt is a straightforward, classic haunted house thriller that is enjoyable enough, but fails to bring anything original or inventive to the genre.

Director Mac Carter, working from a script by Andrew Barrer, does manage to deliver a few truly creepy sequences on a low budget in his directorial debut. The film has a nice old-school approach. Jacki Weaver, the veteran Australian character actress and two-time Academy Award nominee, is appropriately unsettling in her strong supporting role performance.

The movie opens strong. A grieving father frantically tries to communicate with his deceased children, using an eerie vintage radio device, before meeting with an unfortunate end. Carter is able to create an effectively thrilling sense of dread before the bloody climax of the cold open. Things settle into more familiar territory after that. A new family moves into a house known for its mysterious deaths. Then we get the slow reveal of ghosts haunting its hallways.

Set in the winter, this ghost story follows a teenage boy Evan (Harrison Gilbertson) and his new neighborhood crush Samantha (Liana Liberato) as they work together to uncover the mysterious events behind the supernatural presence in Evan’s new home.

Much of the mystery centers around the one surviving member of the family who previously owned the house, Janet Morello (Weaver). She provides the backstory for the haunt in a lengthy, raspy voiceover. Janet was a pediatrician whose husband and three kids died one-by-one (the “Morello Curse” it was called) in the home she finally sold. Her tale is told via black-and-white flashbacks, and it provides background for the ensuing action with the home’s new residents, a family whose demographic makeup is identical to the Morellos’.

Janet shows up the day the new family moves in, claiming to have left something behind (a portrait of her teenage son). She informs 18-year old Evan that the attic bedroom he’s just claimed used to belong to her own son, who died when he was Evan’s age. Evan doesn’t really react to this news. In fact, none of the characters seem terribly troubled about the home’s tragic history.

The true catalyst for the action is Sam, the troubled neighbor girl who knows the history of the home and even knows the nooks and crannies where noteworthy items are hidden. Soon the young couple decide to dig up the ominous radio box we saw in the beginning of the film, and they begin summoning spirits—never a good idea in these kinds of films.

What follows is a pretty predictable set of ghost film clichés, including hissing shadows, stringy-haired specters, creaking doors, creepy dolls, sepia-toned flashbacks, and plenty of jump scares. The story itself is fairly by-the-numbers, and the “startling” reveal at the end of the film probably won’t come as any big shock.

The film is anchored by strong performances from the two leads and in interesting coming-of-age love story that adds some depth to the generic haunted house story. Liberato and Gilbertson have a nice relaxed chemistry together, and they are sympathetic as lonely teens seeking comfort in each other.

There are some solid, dramatic themes lingering just beneath the surface of this film; issues of alienation, abuse, loss, and life after death. The film, unfortunately, never digs that deep. But there’s a wealth of untapped potential here.

The movie doesn’t offer much in the way of originality, but Carter has a strong eye for visual storytelling and does provide some legitimately creepy ghosts and unsettling reveals. Production designer Giles Masters delivers an elegantly creepy house, ripe for a haunting, and Reinhold Heil’s moody score helps intensify the fear factor during crucial scenes. Cinematographer Adam Marsden provides a cool visual tone that, combined with the icy weather, gives the film an effectively spooky atmosphere.

The film never rises to the level of other superior ghost films, but it’s certainly watchable and competently constructed. It does create some legitimate dread and spookiness, but never quite transcends to the level of being actually scary. The biggest letdown for the film is that it’s ultimately quite forgettable. But Carter shows strong promise as an up-and-coming filmmaker, and there’s enough here to hint at the potential for greatness.

A fairly straightforward ghost tale that doesn’t offer much in the way of originality or memorability. Still, it’s a fairly entertaining watch that is well shot and legitimately creepy at times, even if it is never truly as scary as you want it to be.