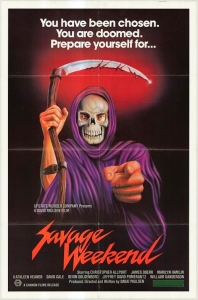 I’m a sucker for 80s slasher films — the good, the bad, and even the downright ugly. Thus, when I saw that Kino Lorber was releasing a sexy looking blu-ray of the relatively obscure Savage Weekend, I jumped at the opportunity to give this a virgin watch. My interest was further piqued upon discovering this “80s” slasher was actually filmed in 1976 and only released in 1980. This makes it a very early entry into the slasher compendium, introducing elements of the subgenre before Halloween caused the slasher floodgates to burst wide open and flood the market with hoards of copycats and masked murdering wannabes.

Savage Weekend was written and directed by David Paulsen, a writer at the time for the prime-time soap Dynasty (what?!). It was shot in ’76 under the title The Killer Behind the Mask. It received a very limited theatrical release before being shelved and later picked up by The Cannon Group; then distributed under its current title. The film follows a group of city slickers as they head out in to the country on vacation. When the group arrives, they meet a backwoods local who appears hostile to the outsiders and has a reputation for a short temper and very bad behavior. He becomes prime suspect number one when the vacationers start turning up dead.

The movie begins by throwing you right into the action. It’s a chaotic and headache-inducing opening. Shot in first person POV, we follow a shaky handheld camera following a girl being chased through the woods. Frenetic banjo music scores the scene. A chainsaw is seen running on the ground and we see a redneck look directly at the camera, give a creepy half smile, pick it up, and move towards the camera. The opening sets us up for a manic, over-the-top, bloodbath. It’s completely surreal, but oddly compelling.

Suddenly and abruptly, the entire tone changes. We’re transported to a serene New York City apartment, where we’re introduced to the major players. The banjo has been replaced by soft piano music. From this point on, we spend the next hour getting very little in the way of action. The only kill happens by way of flashback. In fact, for most of the film, Paulsen seems to be much more focused on sex over violence, and it’s surprisingly soft-core. The previous release on DVD appears to have been heavily edited, but the blu-ray provides plenty of gratuitous grinding, nudity, and awkward seduction scenes that provide more tee-hees than titillation.

The movie finally gets going in the last act, following the effectively creepy masked killer around as stalks and eliminates his victims. However, the kills aren’t particularly juicy and will leave serious gore fans disappointed. In true slasher style, we do get a relatively satisfying twist and a nice reveal.

Ultimately, Savage Weekend doesn’t quite know what kind of film it wants to be. It’s a bit all over the place, and Paulsen seems to have a hard time deciding if he’s making a straightforward slasher or a slow running, giallo-inspired mystery…a bloody horror film or pure sexploitation. It has a myriad of technical issues, including regular cameos from the film’s boom operator. It’s not particularly well shot, loses steam midway through, and is at times borderline offensive and laughably bad.

Considering the fact that this movie was a bit of a pioneer in the slasher subgenre, some allowances should be made for its obvious shortcomings. In spite of all its mistakes (and there are many!), it’s strangely compelling and highly watchable.