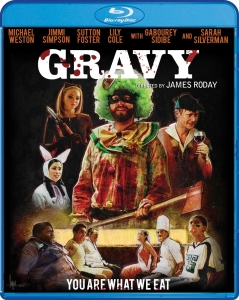 Gravy marks the directorial feature film debut for Psych star James Roday, who also co-wrote the script with Todd Harthan. The film, released by Scream Factory, follows the diverse staff of a Mexican restaurant on Halloween, all of whom have stayed until closing hours. These unfortunate souls find themselves at the mercy of a trio of eccentric cannibalistic killers, who force them to play games in order to keep themselves off the menu.

It’s an over-the-top, somewhat ridiculous premise, and the plot is fairly thin. But the script is witty and entertaining, and the stellar cast sells every moment of the insanity. The film is chaotic and moves at a frenetic pace. In less capable hands, it could have quickly sped off the rails. But exceptional performances in front of the camera, combined with Roday’s obvious talent as a director, keep this bullet train on course.

Jimmi Simpson, Michael Weston and Lily Cole play the demented and depraved, but strangely likeable and humanistic, killers. The performances are stellar, with each of the antagonists masterfully translating the script’s sardonic wit and rapid-fire comedic timing. The chemistry between the three is a joy to watch.

Another key character in the film is the music. Gravy has an exceptional soundtrack, with songs carefully chosen to enhance the mood and tone of the film. It’s not just background noise. At numerous times throughout the movie, the music is front and center and paramount to the scene development. Some may find this distracting, especially at times when the music can overpower the dialogue. But, for the most part, it really works for the film. The well-curated soundtrack is incredibly diverse, featuring songs from Richie Valens, Katrina and the Waves, and Tears for Fears. In fact, Curt Smith of Tears for Fears provides the score for the film, along with Charlton Pettus.

Pulling off the perfect horror comedy can be a difficult endeavor, as it’s not always easy to strike that perfect balance between the humor and the horror. You need legitimately funny material that feels organic to the scary situations and doesn’t feel forced or tread too far into the genre parody territory. Then you have the horror elements that need to be masterfully interwoven into the comedic material, ideally offering actual scares and/or satisfying gore that remains respectful of the genre.

Roday’s impressive directorial debut manages to strike this balance exceedingly well, combining a strong cast with witty dialogue and exceptional practical effects. He has an obvious affection for the genre, and it shows.

Despite it being primarily an irreverent comedy, the film doesn’t shy away from the dark and disturbing. In fact, Gravy is gloriously bloody thanks to the brilliant FX team of Greg Nicotero and Howard Berger of KNB.

Horror aficionados should be more than satiated by the shocking and unexpectedly graphic nature of the gory effects. While film lovers in general should appreciate the witty script, interesting characters, clever plot twists, and outstanding performances.