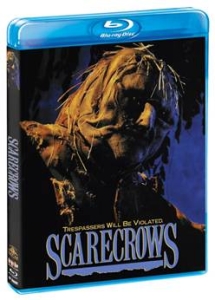 Scarecrows is a 1988 American horror film written and directed by William Wesley. While it spent years in relative obscurity, the recent blu-ray release from the cool kids at Scream Factory is breathing new life into this gory and atmospheric 80s.

The film centers around a group of bank-robbing paramilitary mercenaries who steal three million dollars and hijack a plane. After one of their crew escapes with the money, they land near an abandoned farmhouse surrounded by scarecrows. As the group searches the scarecrow-infested grounds, they begin to get picked off one by one by an unseen assailant. Something evil is lurking on these grounds…

Scarecrows is a little slow to get started. It’s an old school horror film that creates suspense through a gradual buildup. You need some patience to get to the real mayhem, but the payoff is more than worth it. Once things really heat up, we’re treated to a bloody, exceedingly gory romp that is incredibly satisfying for fans of visceral kills and stomach-turning practical effects.

This is a spooky looking movie that makes highly effective use of its dark and atmospheric setting, creating an appropriately chilling mood. Set in a menacing cornfield (reminiscent of Children of the Corn), the titular scarecrows are perfectly lit against the darkness to enhance the extreme creepiness. The scarecrows themselves are surprisingly simple, yet downright terrifying.

It’s a low-budget film with slick production values, making it appear more expensive than it was. What the filmmakers lacked in funding, they more than made up for with ingenuity. Considering it was made for under $500,000, this film looks pretty great in high-definition, which is made all the more impressive by the fact that it’s an entirely night-set film.

Scarecrows makes brilliant use of its supernatural scares, including demonic curses, zombies and ghostly voiceover radio broadcasts. The execution is creative and legitimately frightening. The climax of the film includes one of the most memorable and disturbing re-animated corpses ever captured on film. Suspenseful and seriously inventive, this movie delivers on almost every front.

Don’t expect much in the way of plot or brilliant acting, but that shouldn’t affect your enjoyment of this highly entertaining and genuinely creepy gorefest.