Contracted is a unique, disturbing and gore-soaked take on the zombie sub-genre that offered surprisingly more substance on a second viewing. 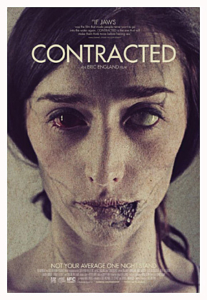 Zombie movies are not my forte. They are probably my least favorite sub-genre of horror. Every movie has some unexplainable or obscure manner of raising rotting corpses from the dead. Then they tried to make zombies scarier by making them fast (although I generally label those guys as “infected,” which is a topic for a whole other article).

So when I saw Contracted in my Netflix queue, I skipped right past it. Boredom later brought me to watch, where I confirmed my suspicion of this being just another Zombie flick. But after seeing Contracted pop up in other places, I decided I’d try again and see if I could look past this tedious tale of blood and “Braiinnnssss.”

What I found was a tortured soul desperately fighting for her life. 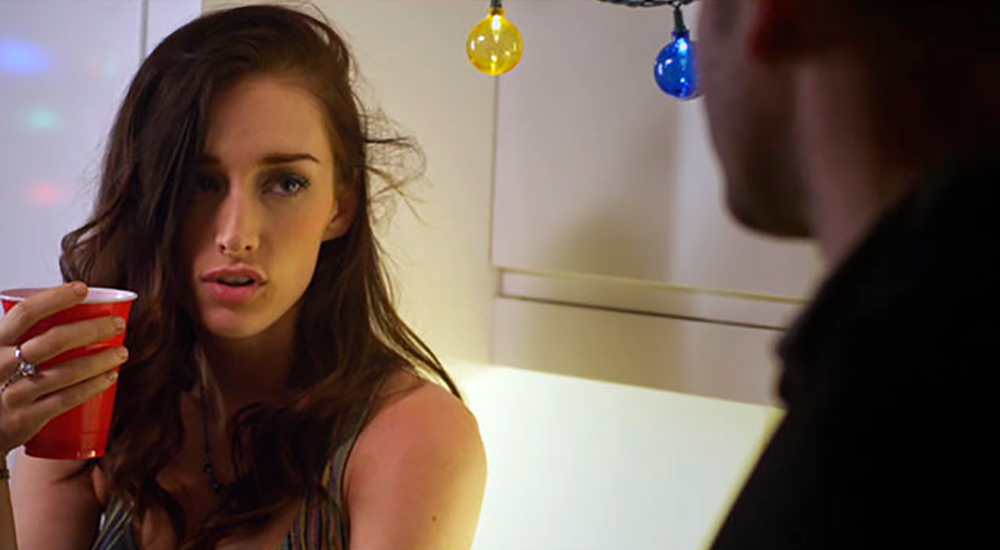 Samantha attends a party trying to get over a recent break up. BJ, another party-goer fresh off of having sex with a corpse, takes advantage of her, raping an inebriated Samantha after rejecting his advances. Over the next few days, Samantha tries to treat what she thinks is an STD, but it slowly transforms her into something worse — a zombie with a violent streak.

My biggest pet peeve in movies is not being able to empathize with a character. Even if the character is supposed to be evil, the audience should still have some connection to them. I absolutely loathed Samantha. Throughout the entire movie, she’s quick-tempered, clingy, and immature. She has no redeemable qualities, and I actually started to wish she’d hurry up and turn so at least she wouldn’t be annoying anymore.

Then we have the other people in Samantha’s life: her doctor who fails to see the obvious deterioration in her condition; her mother who plays off her daughter’s lesbianism and behavior as another bout with hard drugs; and her friends who offer little help besides commenting on her looks.

I also couldn’t help but think of how unlikely these situations were. I’m willing to forgive the zombie-STD, but how can Samantha, who is losing pints of clotted blood every time she uses the bathroom, not be more concerned? The doctor should be ashamed too. If this disease Samantha has is so bad she needs to quarantine herself, why even send her home? And even more so, why is he not wearing gloves? I found it hard to believe these events went from 0 to 100 that quickly.

I did go back for a second viewing though, and found some good throughout the movie. If you like gore, Contracted is one to watch. Scenes involving Samantha’s worsening “menstrual cramps” and maggot-infested lady-bits will make your skin crawl. Her bloodshot eyes look incredibly real, and her skin turns a translucent white as time ticks away.

I’d like to give a massive shoutout to the makeup and effects team for making Samantha one of the best looking and most realistic zombie’s I’ve ever seen.

Not into gore? If you can get past the displeasure of seeing these characters interact with one another, it’s actually a pretty scary story. Imagine thinking you had an undiscovered, fatal STD, only to find out the guy you hooked up with days prior is wanted by the police. No one takes you seriously, not your friends, not your doctor, not even your own mother. Your life is falling apart just as quickly as your nails and teeth are rotting off. Samantha’s condition is in rapidly declining, and just when you think it can’t get any worse, an inter-title appears on the screen: “DAY 3… OF 3.” This is it, the climax.

My biggest pet peeve turned out to be completely necessary. We find out that Samantha’s life hasn’t been the easiest. Scars on her wrists and her incessant need to rekindle a lost relationship explain the clinginess and attitude. She’s trying her damndest to have a normal life, only to be thwarted at every turn. Her final acts as a human are those of disappointment, rage, and abandonment, and because of that she had nothing else to live for, bringing forth a flesh-eating monster in a pretty purple dress. CONTRACTED did what few zombies achieve — making me root for the zombie.

I don’t think it was unfair to immediately give this movie the cold shoulder, especially when all I could see were problems. But I do think that giving Contracted a second chance actually did me some good. As I stated in the beginning, I don’t like Zombie movies. However, the putrid bouquet of narrative that is a girl slowly becoming undead was quite refreshing.

Sometimes judging a book by its cover blinds you from the small pieces of genius sprinkled throughout a movie, and giving films like Contracted a second chance is an absolute must, especially if you’re not a fan of Zombies.