Once on the U.K.’s infamous Video Nasties list, the Italian Nazisploitation Shocker “THE BEAST IN HEAT” makes its Blu-ray premier from Severin Films. 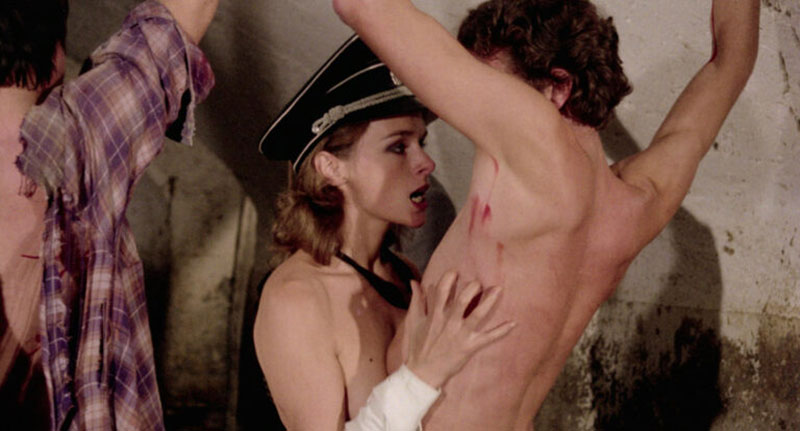 I have seen horror films with Nazis before; movies like DEAD SNOW, SHOCK WAVES, THE KEEP, ZOMBIE LAKE, and FRANKENSTEIN’S ARMY. But while I had heard of movies like ILSA, SHE-WOLF OF THE SS, I had never actually seen a Nazisploitation movie.

Thanks to the good folks at Severin Films, I have my introduction into this sleazy sub-genre with the world Blu-ray premier of the infamous Italian shocker, THE BEAST IN HEAT. 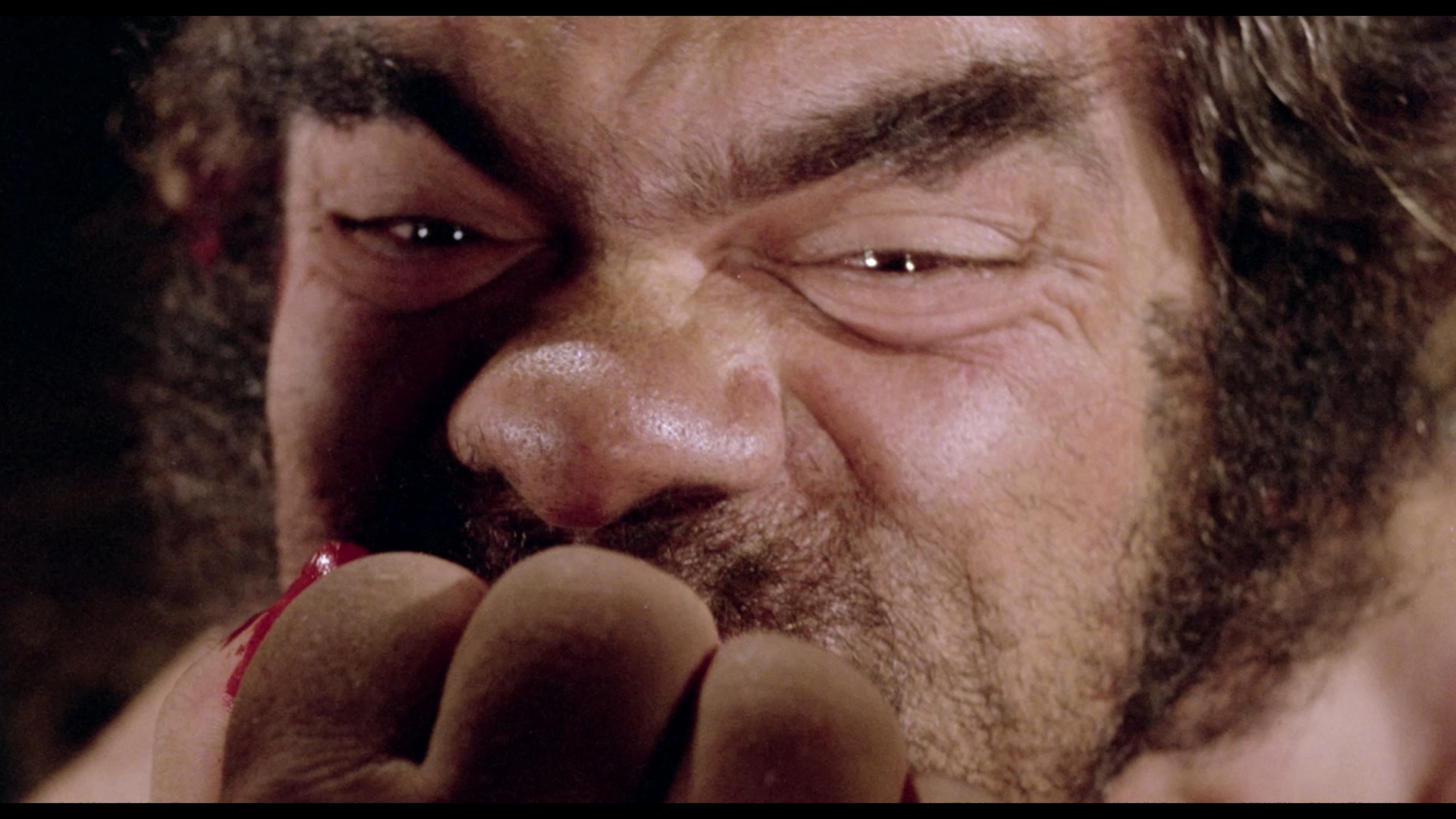 In the waning days of World War II, a Nazi sadist and scientist played by Macha Magall continues to work on creating a superior Nazi superhuman. Her experiments have helped create an elixir that acts as a super aphrodisiac. Injected into a brutish dwarf (Salvatore Baccaro), the serum keeps the titular Beast in a perpetual state of violent horniness.

Locked in a cage, women are stripped and thrown into the cage with the Beast. Once inside, there is no escape as the Beast sexually ravages whomever is given to him while the Nazi scientists and officers look on proudly. 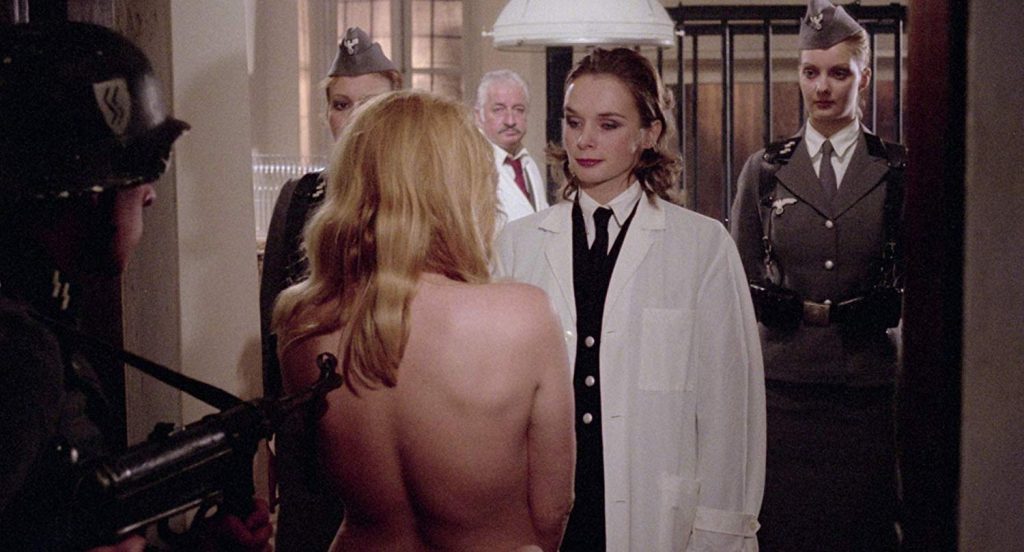 The goal of the director is very clear, and that is to shock and disgust the viewer as much as possible. Batzella is successful on one level, but it’s hard not to end up laughing at many of the scenes involving medical experimentation, sexual violence, and torture.

One example is a scene where a woman prisoner is tied naked to a table. On her stomach is a steel bucket covering what we assume to be rats. The way the prisoner is screaming, one would assume the rats are angrily eating their way into her stomach. But when the bucket is lifted, it’s revealed that there are two not very angry or aggressive guinea pigs on the woman’s stomach. 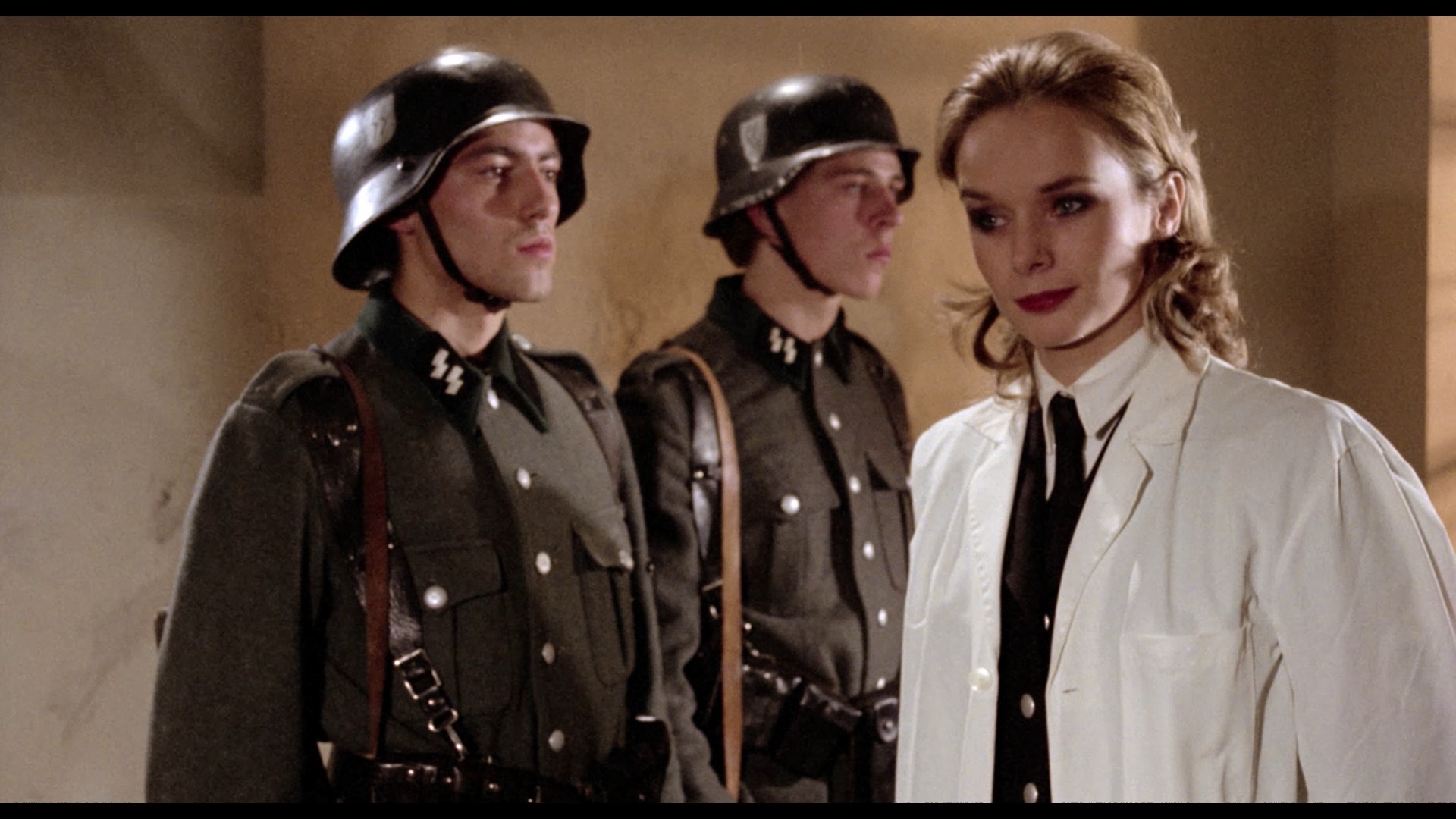 It’s difficult to imagine why guinea pigs were used for this scene — perhaps for budgetary reasons, or because the actress was frightened of rats? We may never know.

The scenes from the earlier war movies serve as a subplot for an Italian revolutionary uprising and Allied bombing of Nazi strongholds in Italy, but these scenes do not easily mesh with the new footage filmed for THE BEAST IN HEAT. The quality of the images is vastly different between the footage from the three movies, with the battle scenes from HEROES WITHOUT GLORY looking like newsreel footage compared to the crisper new footage.

Despite — or perhaps because of — all the flaws in THE BEAST IN HEAT, I found myself enjoying this terrible, vulgar, unrepentantly offensive movie quite a bit.

It’s bad in the worst ways — from the scene described above, to the maniacal evil laughing by Macha Magall, to the camera mugging by Salvatore Baccaro’s Beast, to the poorly timed overdubbed dialogue. I was laughing during much of the movie, as was my wife on the few times she came in and checked out what I was watching. 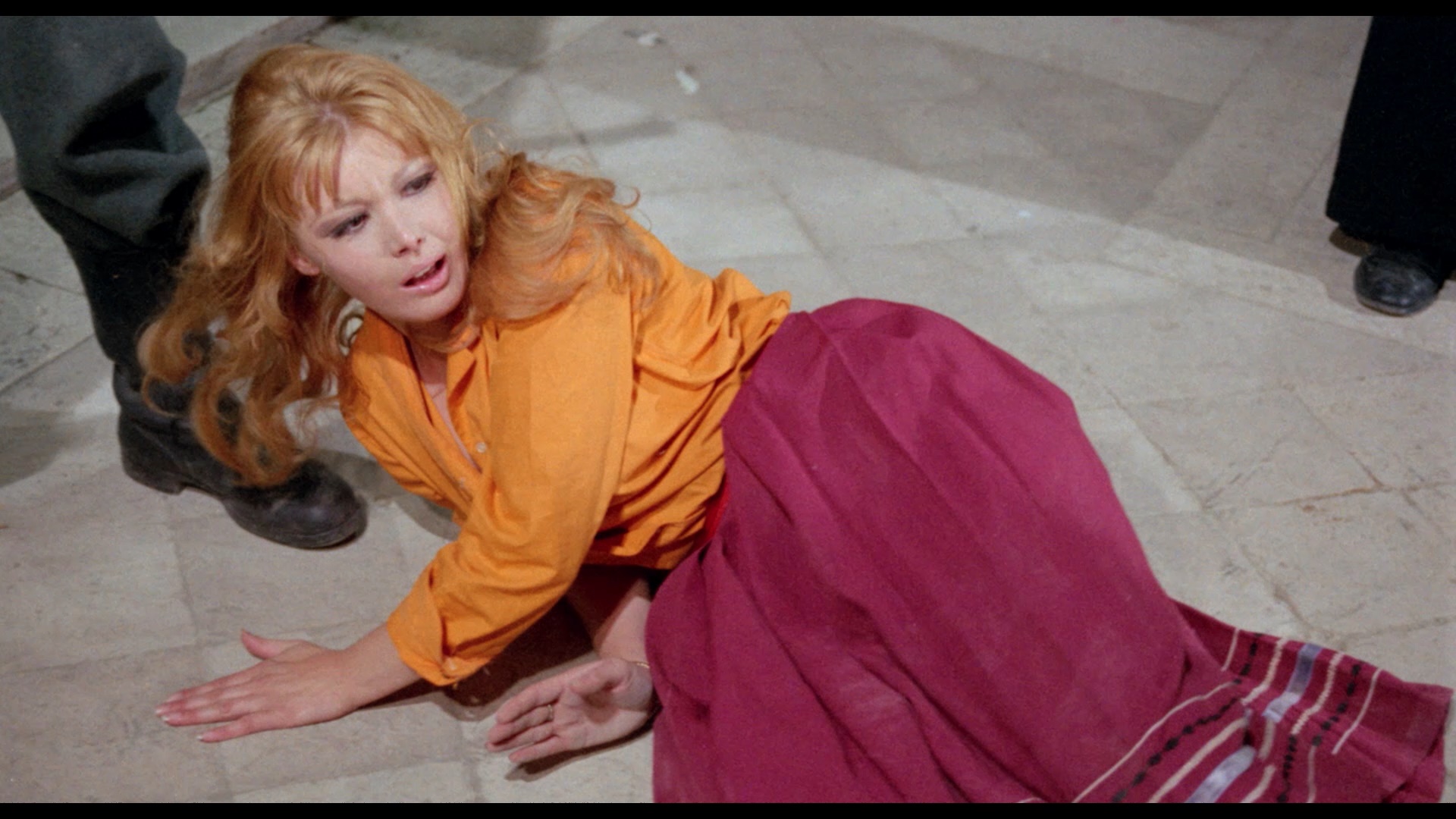 Severin does not disappoint when they release a film to Blu-ray. While the features may appear slim upon first glance, what the disc does offer goes deep into the Nazisploitation sub-genre.

First is the 90-minute documentary, “Fascism On A Thread – The Strange Story of Nazisploitation Cinema.”

Italian Nazisploitation only lasted two to three years in its heyday, but there’s plenty of material to cover for this feature-length documentary. “Fascism On A Thread,” includes commentary from film historians, Italian filmmakers who made these films, and the She-Wolf of the SS herself — Ilsa star Dyanne Thorne. 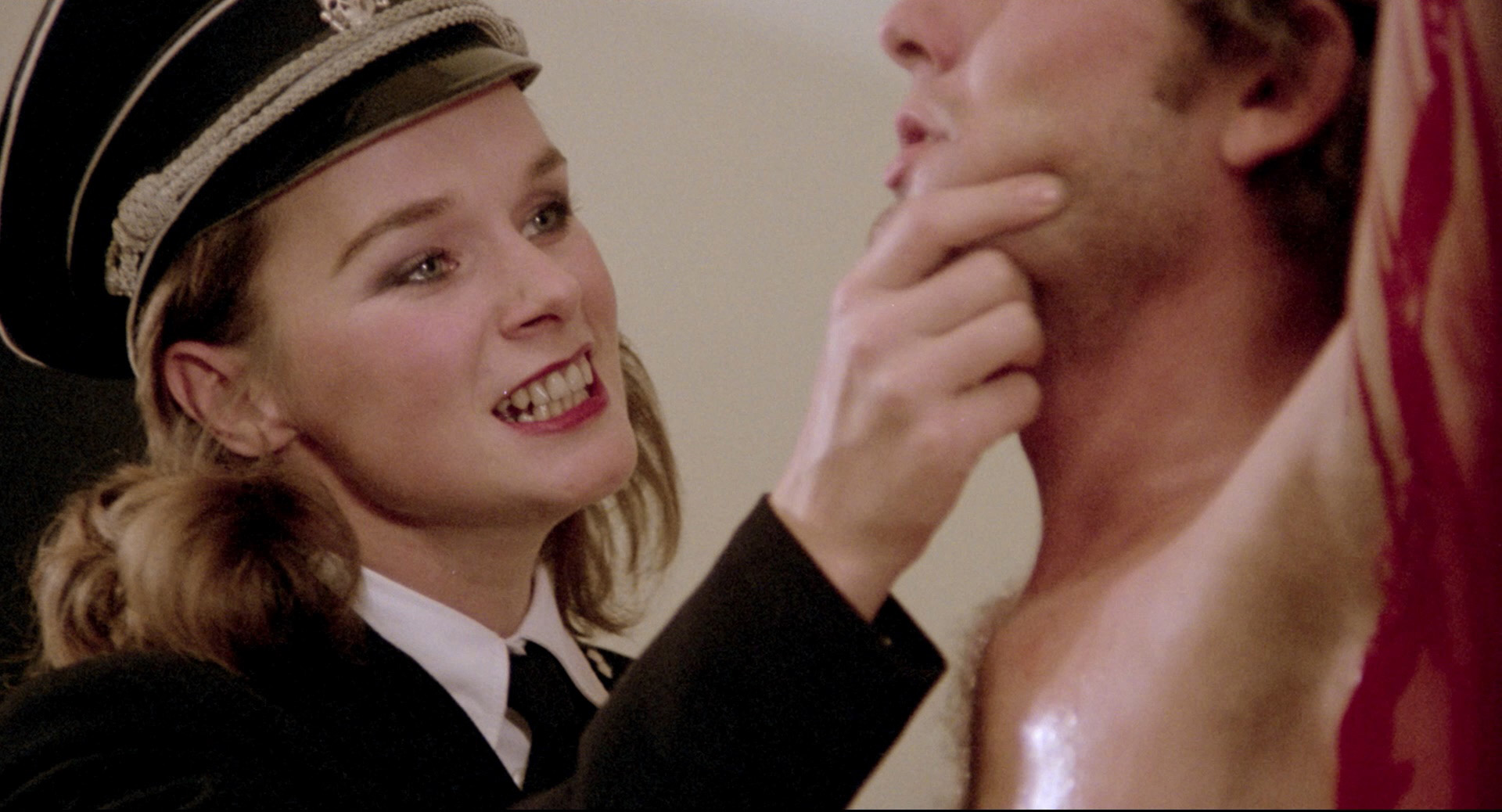 The second feature is a 30-minute interview with author Stephen Thrower.

This interview briefly summarizes the Nazisploitation era covered in the documentary but goes more in-depth about THE BEAST IN HEAT as well as discussion of the UK’s infamous Video Nasties banned movie list.

Between the documentary and the in-depth interview, the Nazisploitation era is covered in excruciating detail. Not only are the movies of this era discussed, but many of the directors and actors involved in these movies are also covered. Additionally, if you want to deepen your library of Nazisploitation movies, the documentary will fill you in on all the movies made during this timeframe. It’s up to you to seek them out! 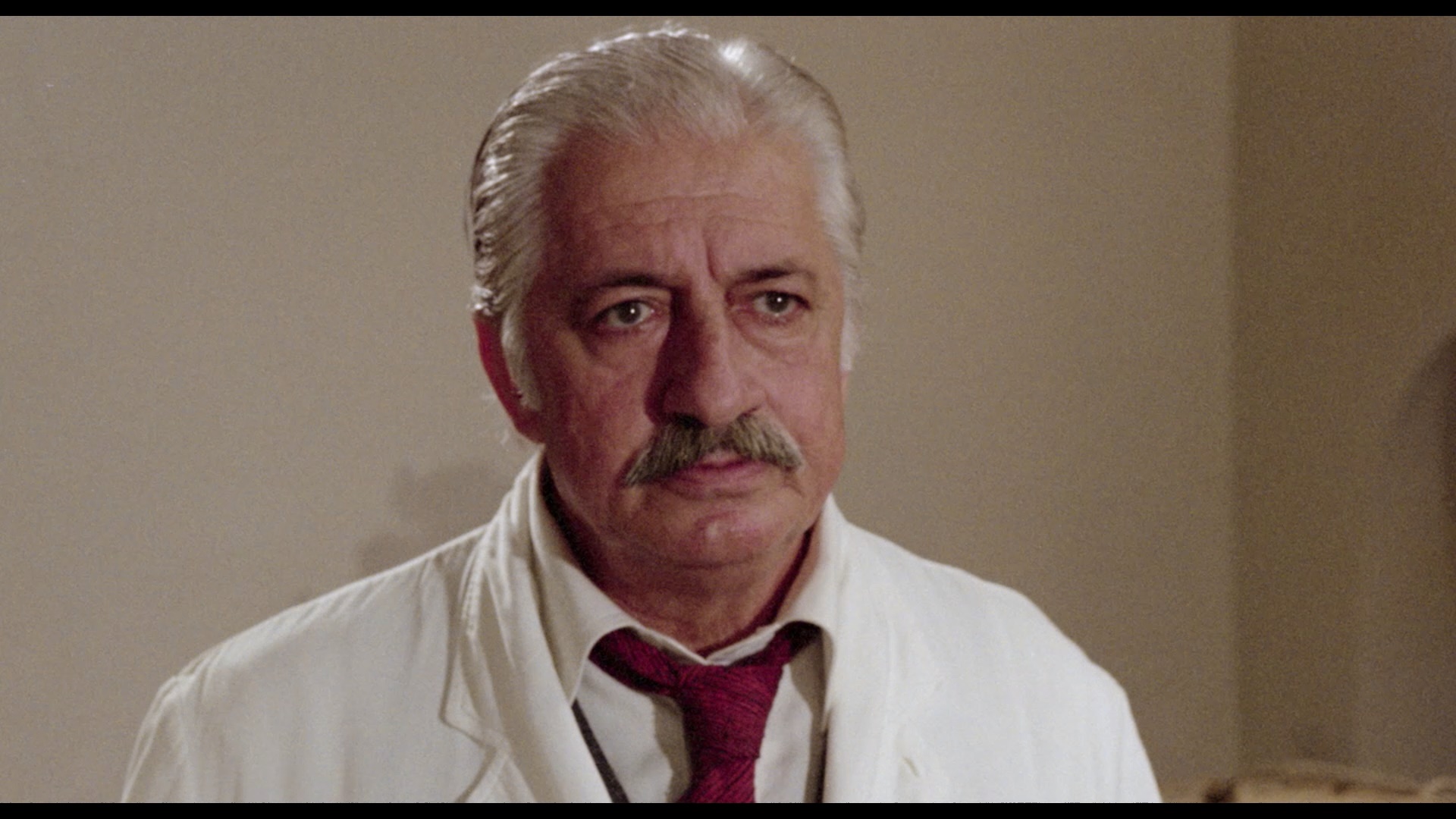 Devotees of weird and depraved cinema should have this Severin release in their collection.

The movie is a curiosity; a shockingly filthy depravity that has undeniable charm and unintended humor. Severin’s added features are the cherry on top of this Blu-ray release.

THE BEAST IN HEAT may be one of the strangest releases from 1970s Italian cinema and a strong candidate for best Severin release of the year based on the special features alone.

For more information and to purchase THE BEAST IN HEAT, visit Severin Films here.