An American Vidiot Presents: “I fought the law, and the law won.” 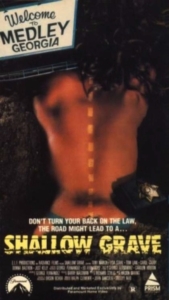 A huge tactic used by many VHS distributors in the 80s was releasing films with seriously misleading box covers — marketing movies in a way to appeal to the largest audience possible. In a pre-Internet world, almost all rental decisions were made based on cover art alone. But all too often the movie would fail to deliver on the promise of the packaging, and you sometimes got a very different type of movie than you were expecting.

For example, a lot of drama thrillers would be passed off as horror movies with their gory covers and awesome tagline. You’d be expecting buckets of blood and awesome effects, and what you’d get would be a slow burning murder mystery that was heavy on dialogue and practically bloodless. In a way, that’s sort of what we get with the 80s horror thriller Shallow Grave. 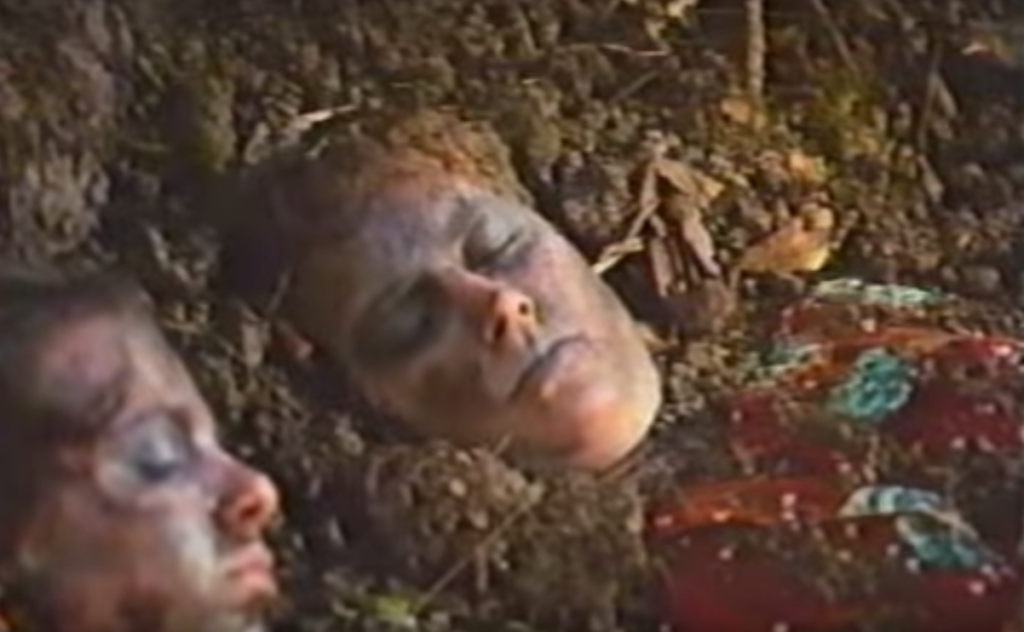 Not to be confused with Danny Boyle’s 1994 film of the same name, Shallow Grave was released on VHS in 1987 by Prism Entertainment. The film was directed by Richard Styles and stars Tony March, Lisa Stahl, and Tom Law. It’s about four teenage girls who travel to Fort Lauderdale on a Spring Break vacation. When they get a flat tire on the side of the road, one of the girls witnesses a grisly murder. Knowing that someone knows of his crime, the killer goes on a murderous rampage and starts killing the girls. Calling the police won’t exactly work out for the girls though because, as they’ll soon discover, in the town of Medley, Georgia, the killer wears a badge. 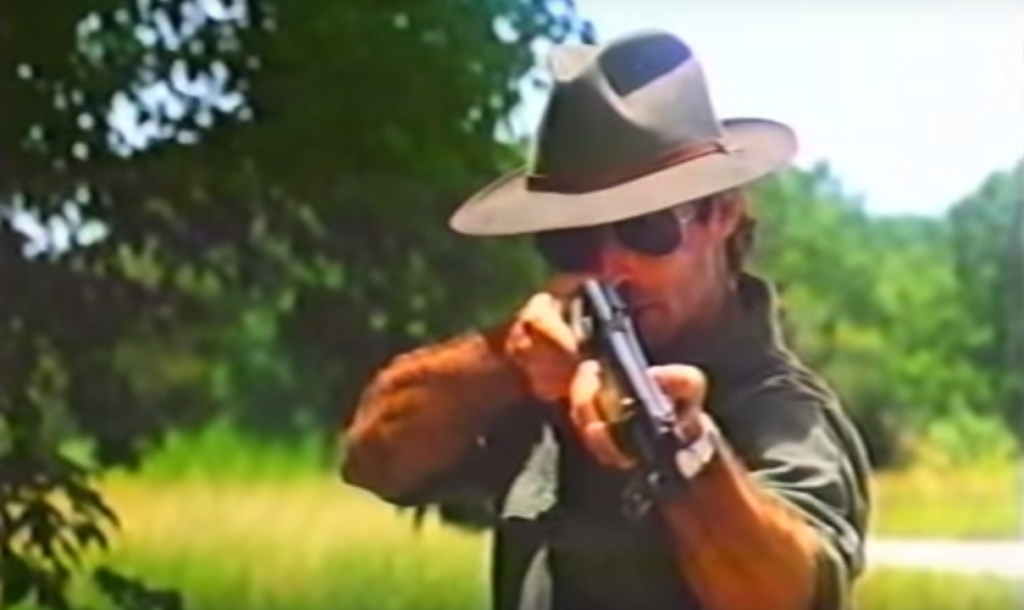 Going into this movie, I was expecting an old school slasher… mostly because of the box art and all the online reviews. And did I get that? Well, yes and no. This movie does have many slasher elements, but it ultimately ends up feeling like more of a drama thriller. That’s not necessarily bad, it just took me by surprise.

The acting ranges from decent to pretty bad, but that is to be expected in films like these. Overall, everything in this movie from a production standpoint is pretty average. That’s actually a compliment considering that most films trapped on VHS format are terribly quality — not because it’s VHS, but because they are just poorly made. This one looks and feels more like a made for television movie. While it’s nothing exceptional, it’s still very much underrated.

As I mentioned before, this movie never made the leap to DVD, which is pretty hard to believe. How are movies like Theodore Rex with Whoopie Goldberg making it to DVD, while legitimately good movies like this are still stuck on VHS? The fact that some of these movies are still not on DVD amazes me. But enough rambling, let’s get back to the movie.

There are some things I thought this movie did very well. I especially enjoyed the characters. All of the lead girls were extremely likable. Unlike so many formulaic slasher films, you actually care for them and get a little sad when they die. Even though a couple of them make the typical dumb decision here or there, it’s mostly understandable. 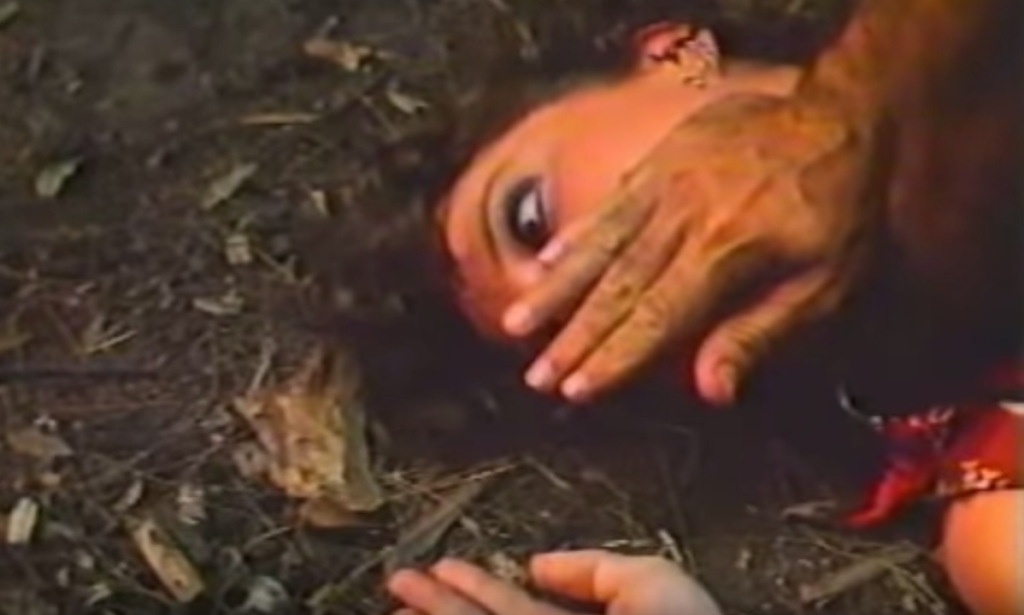 Additionally, the killer in the film is depicted pretty well. He’s easy to hate, and that works for the movie. In some slashers, like Wolf Creek, Friday the 13th, and A Nightmare on Elm Street, you end up rooting for the killer. In this movie, however, the killer is just a monster. You don’t want him to kill the girls. You want him to be stopped. While there aren’t actually a lot of kills in this movie, they are well done and extremely effective (like having a girl get her head blown up by a bullet). There are also some really intense moments that enhance the thriller aspect of the film.

Of course, this movie is far from perfect. It moves quickly at first, with most of the kills taking place right at the beginning, but it becomes quite slow as it moves along. Because I tend to have a short attention span, it was difficult to sit through the entire movie.

To add to that, this movie has a very unnecessary sub-plot. In the beginning, the girls meet these two guys at a restaurant and promise to meet the next day. When the girls don’t show up, the guys try to find them. While I don’t think they should have cut out this sub-plot entirely, I do wish they would’ve went in a cool direction with it. But it just ends up going nowhere, making the sub-plot pointless and the movie longer than it needs to be.

The last minor thing I’d complain about is the ending. I do not want to spoil it, because I still think you should check out this movie if you can, but the ending was a tad underwhelming. It’s not that it was necessarily bad… I just felt it could have been stronger. SHALLOW GRAVE doesn’t bring anything new to the genre, but it is a really good underrated movie with likable characters, cool kills, and some pretty intense moments. Just don’t go in to it expecting a full-blown horror slasher film. At its heart, it’s a thriller with slasher elements. But it’s competently made and definitely worth a watch if you can find it on VHS.