Reel Review: “I Spit on Your Grave: Deja Vu”

Meir Zarchi digs up old hostilities and new players for “I Spit on Your Grave: Deja Vu”, the official sequel to the controversial 1978 rape-revenge film.

When horror fans discuss the most controversial, the most powerful, the most unnerving movies, it’s inevitable that the discussion centers on writer/director Meir Zarchi’s 1978 grindhouse classic, I SPIT ON YOUR GRAVE.

The story about author Jennifer Hills (Camille Keaton) and her revenge on her five rapists, is a difficult movie to watch. The rape scene, which lasts nearly 30 minutes, is an endurance of human suffering on screen that’s as effective as it is repulsive. There’s no question that the audience wants to see these men pay for their crimes in the most brutal, sadistic fashion possible, and they do.

Now, 40 years later, Meir Zarchi returns to his cinematic creation to bring fans the only official sequel to the original movie — I SPIT ON YOUR GRAVE: DÉJÀ VU.*

Can Zarchi bring the same level of violence and depravity to the sequel that he did to the original, and will it play in 2019?

Forty years after Jennifer’s brutal rape and revenge, she is living a good life. She has raised a daughter, Christy (Jamie Bernadette), who is a world-renowned fashion model. Jennifer has become a rape victim counselor, speaks to audiences around the world, and published a book about her experiences. The families of the five rapists, who hold a grudge against Jennifer, find out about the book as well when they hear Jennifer being interviewed on a religious radio show.

Their anger grows to the point that they plan to kidnap Jennifer and dish out their brand of justice. The plan goes slightly awry when two of the family members, Kevin (Jonathan Peacy) and Scotty (Jeremy Ferdman), mistakenly sweep up Christy when they make their grab for Jennifer. The boys bring Jennifer and Christy before the family matriarch, Becky (Maria Olsen), and the twisted game of revenge begins for both the Hills and the families of the rapists.

I SPIT ON YOUR GRAVE: DÉJÀ VU is anchored by two outstanding performances. 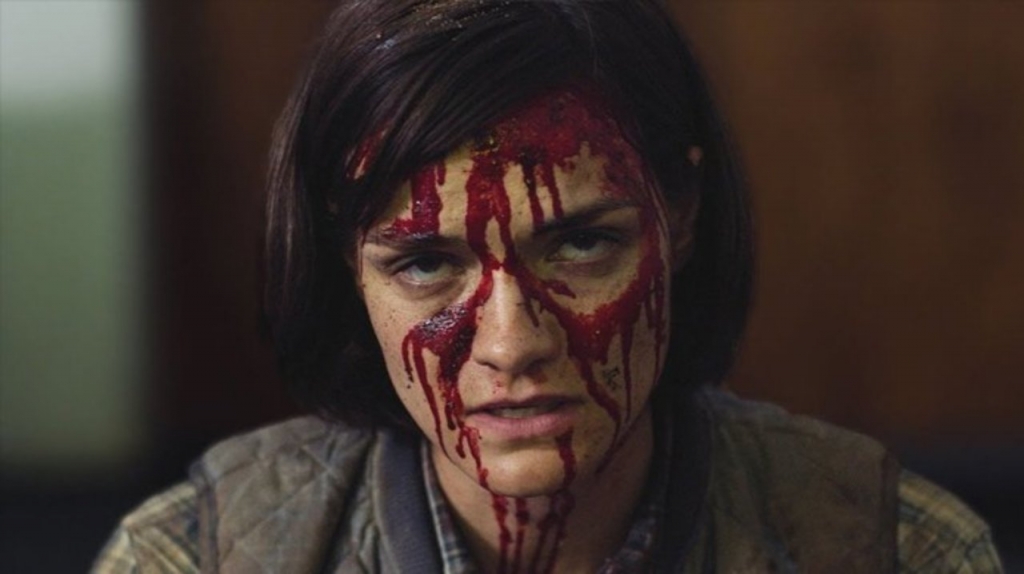 Jamie Bernadette’s emotionally fraught and naked performance as Christy is chilling, powerful, and heart-breaking. Bernadette gives her body and soul to this role, and a movie that edges dangerously close to parody is anchored in its grittiness by Bernadette.

Maria Olsen’s Becky, the family matriarch, is one of the classic villain performances in horror. While the family members of the rapists are, for the most part, broadly stereotyped and played for some laughs, Becky is something else entirely. She shows some of the stereotyping of a backwoods, redneck, religious, uneducated woman. But unlike the other family members, Scotty, Kevin, and Herman (Jim Tavare), Becky has a wicked intelligence that shows behind her gleaming eyes.

When Becky locks eyes on her victims, you can see the rage burning behind those eyes. But there’s also signs that Becky is always thinking, scheming, or turning situations over in her mind to justify her need for vengeance. Becky is not a woman to be underestimated, and whenever Maria Olsen is on screen, eyes are drawn directly to her performance.

Olsen, more than anyone else in the movie, carries I SPIT ON YOUR GRAVE: DÉJÀ VU on her talented shoulders, and everyone else must keep up with her.

There are some interesting ideas touched upon in DÉJÀ VU but not allowed to come to fruition.

Zarchi focuses more on the chase and violent acts rather than delving into themes of religion, victim blaming, feminism, and family heritage. It’s a tad disappointing because in a movie as long as DÉJÀ VU, there is more than enough time to dig into these issues more deeply and still satisfy the need for violent scenes.

As noted previously, the performances of the family members outside of Becky border on the absurd. They are broad portrayals of men with little education, brainwashed by family history and religion, motivated by their desires and little else. Unlike Becky, the men are played more on the humorous side despite their evil deeds. It might seem inappropriate, but for a movie with this subject matter, an escape valve that releases some of the tension and horror, even for a moment, is a good thing for audiences.

If I have one issue with an otherwise solid movie, it’s the running time.

At 2.5 hours, DÉJÀ VU is very long for an exploitation movie and suffers a little bit for its running time.

Aside from the running time, Zarchi is back with a hard, violent, disturbing movie that would feel right at home being released in the grindhouse world of the 1970s. Fans of the original I SPIT ON YOUR GRAVE and extreme horror movies will be more than satisfied with this 2019 sequel, DÉJÀ VU.

*The movie title is quite literal as there are numerous scenes of frequent and excessive grave spitting on.