This time of year is about gorging on horror, and carving out a few minutes for a few spooky shorts is the best way to do it!

Summer is coming to an end, and that’s ok because it means that it’s (almost) officially the spooky season! This month’s roundup of shorts will get you in the mood with a selection of very different stories spanning multiple sub-genres. From a sci-fi horror based on beauty standards to a creepy tale about a woman left to her own dangerous self, to a tragic apocalyptic adventure, and ending with a sweet treat tale of a cookie jar.

This month’s offering is a bit all over the place, to be sure. But that just means, this month, we’ve got something for everyone — which is what spooky season is all about! 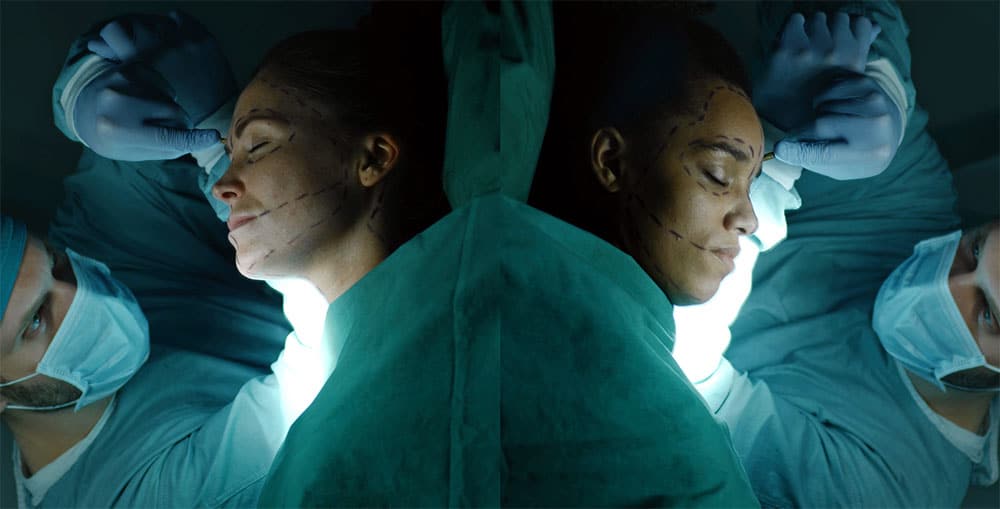 Two women, each feeling pressure to change their looks, go under the knife.

I Want to Be Like You begins with a woman looking and criticizing herself in the mirror. We then cut to another woman doing the exact same thing. Eventually, each of them finds a picture of the other and decides that’s what she wants to look like.

If that seems confusing, it’s because it is a lot like our beauty standards and ideals.

Exploring the pressure of society, social media, commercials, Hollywood, and jobs (the list goes on), director Caitlyn Sponheimer uses this short film to expose these issues. The constant need to fit different physical standards while ignoring the rest of ourselves becomes a horrific voice in the back of our minds, allowing us to see the beauty in everyone but ourselves.

The horror is subtle, and the surgery scene is nothing squeamish enough to need to look away from, but the message in Sponheimer’s film is clear.

The lack of care and love for our own bodies is brutal and needs re-examination.

After her boyfriend leaves for work, a woman must follow her own steps to stay distracted and comforted while being left alone.

Starring two familiar faces, Joe Keery (Stranger Things) and Maika Monroe (It Follows, The Guest) play Jack and Lucy, a sweet couple living together. Jack heads out for a long overnight work shift, and Lucy has to deal with her worst fear: herself.

After Jack reminds Lucy to lock up while he’s gone, Lucy asks, “What can be worse than me?” — a sinister foreshadowing.

The following scenes blend Lucy’s reality with her fantasy world, making it hard to distinguish what is happening to her. As a mysterious cabinet haunt and teases her, she tries to stick to a planned schedule…and not open that cabinet.

In a director’s statement, Kate Trefry describes the short as something to understand one’s identity. Trefry uses the narrative of becoming a mother and the desperation to be able to live in harmony with all sides of her own personality.

The horrors and scares in How to Be Alone take the shape of a bloody cabinet and its insides until they bury and creep into your own brain where your identity crisis lives. A small family seeks refuge after an apocalyptic event, leaving the oldest daughter to keep an eye on their infected father.

The film begins with two girls and their dad eating around a fire in the woods. At first, the scene could be taken in as a nice family trip until you notice the father’s intense leg wound and how his daughters watch him and look at each other, knowing all too well what they’ll have to eventually do.

Just as you may assume it could be a bad hiking accident, the discarded can of cat food confirms that this family is not out here by choice and has to move fast.

Sure, it’s a story that has been told. We’ve seen the family trying to find a safe haven from a post-apocalyptic world while struggling to keep one of their own from crossing over. But a heartbreaking difference allows Flesh and Blood to stand on its own.

As the infection takes over their dad’s mind, he becomes confused. He experiences fits of rage and talking nonsense, which scares his daughters until he can return to being himself. Anyone who knows someone who has suffered from illnesses such as dementia may recognize some of these symptoms.

Writer/director Merlin Camozzi does a great job telling this story in a new way, and the cast and crew have wonderfully created this world where you can truly sense the overwhelming fear and loss in under 20 minutes.

A young girl can’t keep her hands out of the cookie jar, bringing some frighteningly real consequences.

Young Bree, played amazingly by Ava Jamieson, is a wild little 9-year-old who loves horror movies and cookies. Most of us probalbhy agree with this lifestyle, but many of our moms have had to remind us that too many cookies aren’t good for you.

In Kookie, Bree’s mom (Alana Elmer) attempts to slow down Bree’s cookie consumption by switching out their friendly teddy bear cookie jar with a SCARY clown cookie jar (and I’m hardly afraid of clowns, but this thing is messed up).

Bree becomes reasonably upset; why would anyone want that thing in their house?

The trick ultimately doesn’t keep Bree’s hand out of the cookie jar. She has a sweet tooth and just can’t help herself. Unfortunately, this time the cookies summon more than just a stomachache.

With a spooky twist and unexpected narrative, this short by Justin Harding is about more than just a scary clown.