“Silver Stars on Red Velvet” approaches its low-brow material with a wink, offering an entertaining story that sadly gets held back by the film’s flaws. 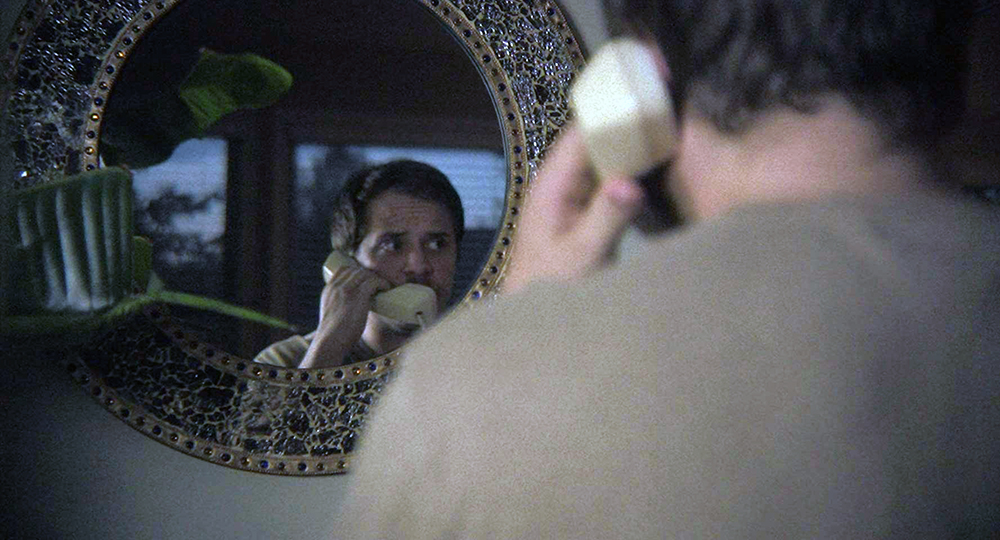 This is the 3rd feature film I’ve covered for Decades Apart Productions, a micro-budget film production company based in Colorado and started by filmmaker RJ Cusyk. One thing I can say that all three films have had in common is a commitment to make the story work with a budget-be-damned attitude.

I remember A Final Hit having a scene where a car catches fire in a garage. Obviously not having the budget to destroy a real car in a contained environment with a blazing fire, the filmmakers used a model car in a model garage that were both clearly models. But they got the scene they wanted and also got the point across with a go for broke, this-is-what-is-needed approach. I can respect that go for it mentality.

While their latest film avoids any big scenes like this, what Silver Stars on Red Velvet does continue for the company is the ability to tell entertaining stories.

I’ve always had the mindset of, “Show me a good story and I’ll be entertained.” 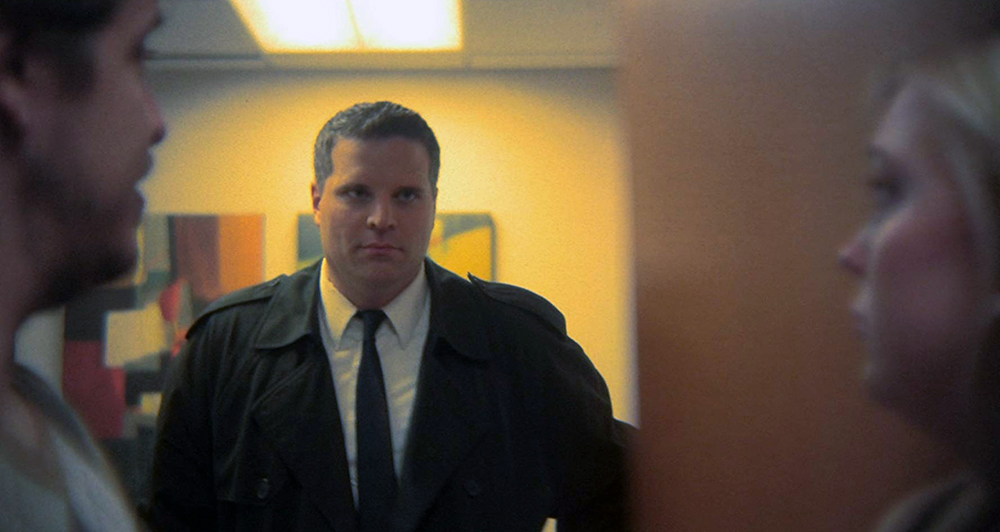 Director Cusyk seems to approach this film with tongue firmly planted in cheek.

While a killer is on the loose and preying on adult film stars, the characters seem to care little about this, even as they make their living in the world of adult film.

While I believe this odd tone is a choice, it is a bit troublesome to the film because the characters are never really taken seriously — which in turn makes it difficult to feel any sense of tension in the story. 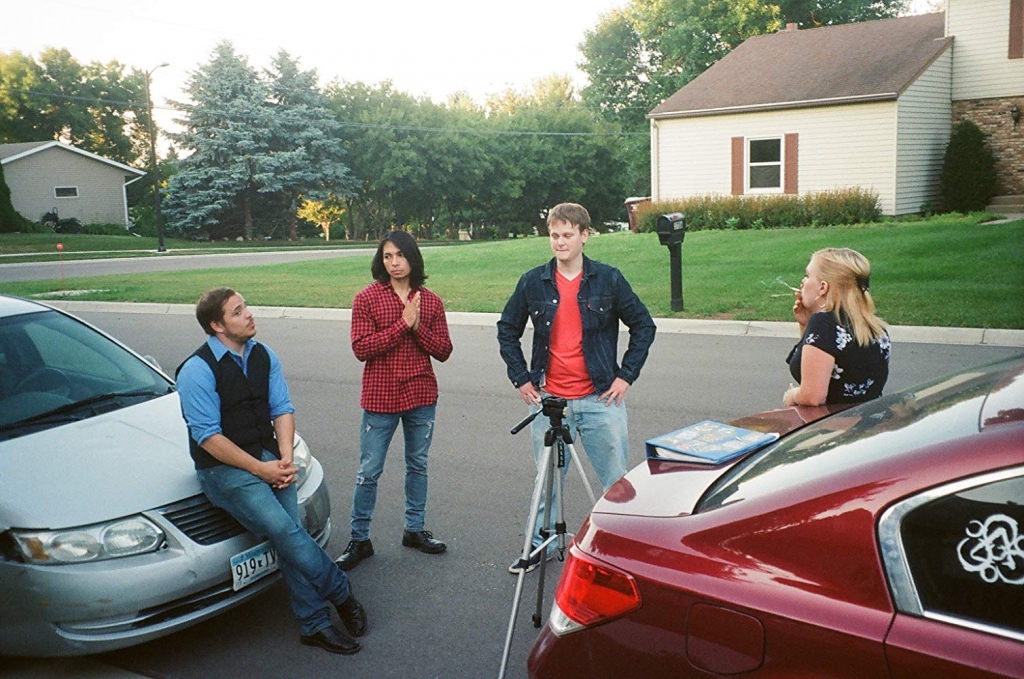 I never felt that anyone was in any real danger because it felt like a joke that everyone was in on.

This isn’t to say the film isn’t enjoyable. It absolutely is most of the time, mainly because of Cusyk’s talent for providing subtly funny dialogue, inadvertently aided by the limited acting ability of the cast.

When the detective on the case of the killer asks Alexander if he’d like to hear about his first murder case, Alexander replies, “Sure, as long as it doesn’t suck.” Moments like this are funny and often, but in abundance they do work to keep the viewer at an arm’s length.

The film looks like it was shot through a screen, giving the impression of a filthy grime covering the town, as if the dust from some dirty underground has wafted up through the sewers into the air.

This look captures the mood of the story perfectly, with its seedy characters working in the sleazy depths of the adult film business. 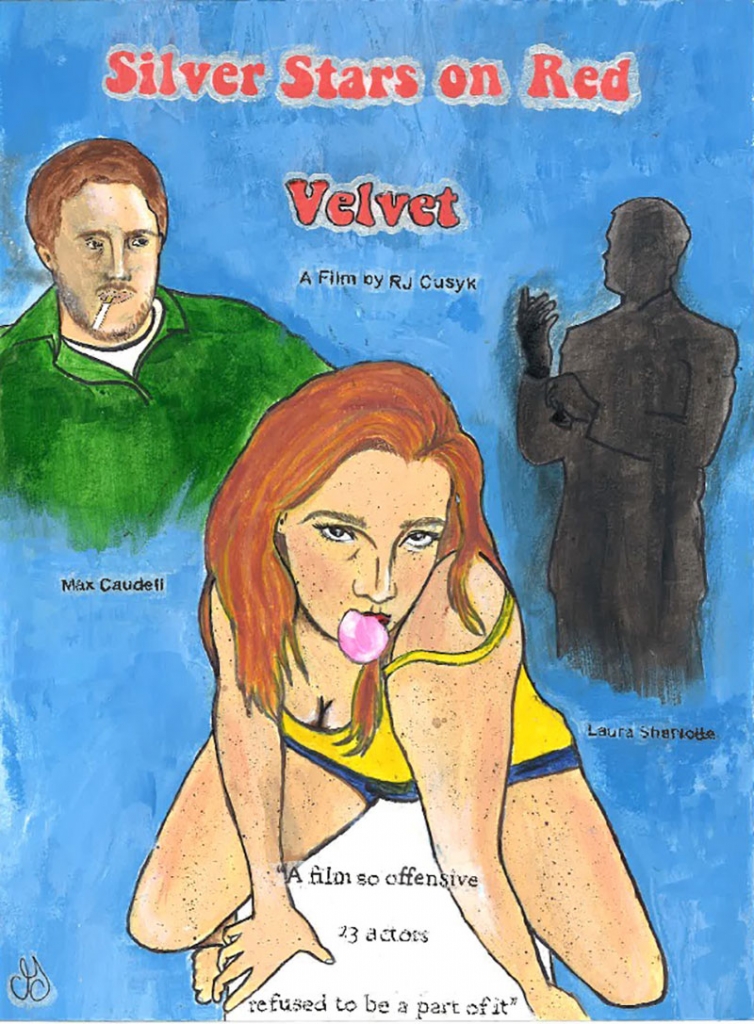 One scene has the shadows of Alexander and Madeline stretching back behind them while on a walk, the sun shining on their faces. Unfortunately, there’s a third shadow stretching back along with theirs, and this clearly belongs to the camera man walking backward in front of them.

The acting is also an issue at times, with mostly flat performances leaving the characters more lifeless than I think was intended in the script. While Silver Stars on Red Velvet offers enough low-brow entertainment to justify its brisk 70-minute run time, the technical flaws and one-note performances ultimately hold it back.

If Cusyk and crew can tighten up some of the technical issues that hinder the film and draw more layered performances from their cast, the filmmaking will become an asset to the entertaining story and not a liability.