The shocking murder of a teenage girl leads homicide detectives down a rabbit-hole of lies and betrayal in this eccentric but flawed first novel. 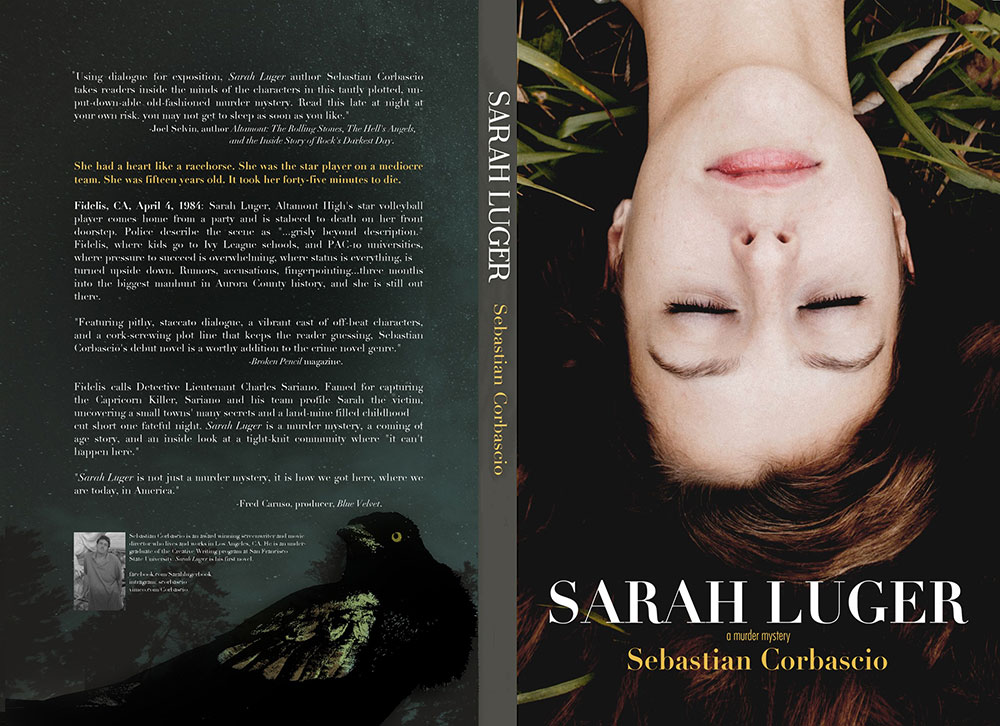 Editor’s Note: The copy of Sarah Luger our writer reviewed was an unedited first draft. Since this review, the author has released a final version which addresses many of the editing errors noted in this review.

Sebastian Corbascio’s Sarah Luger, a murder mystery set within a wealthy neighborhood of expensive homes and prestigious schools, tells a compelling story. Rich with eccentric characters and rapid-fire dialogue, the novel opens with the brutal murder of a teenage girl, then proceeds to examine the circumstances surrounding the crime through a police investigation.

Although opening with a familiar exposition, Corbascio’s book has plenty of excitement and drama for fans of the mystery genre; moreover, the “whodunit” aspect of the story works well, compelling readers to get to the end for the inevitable unmasking of the killer. The narrator tells readers from the very beginning: “Sarah was an athlete and had a heart like a racehorse. It took her forty five minutes to die.”

To find out who could commit such a horrible deed, readers will have to follow the homicide detectives along in their beleaguered investigation. 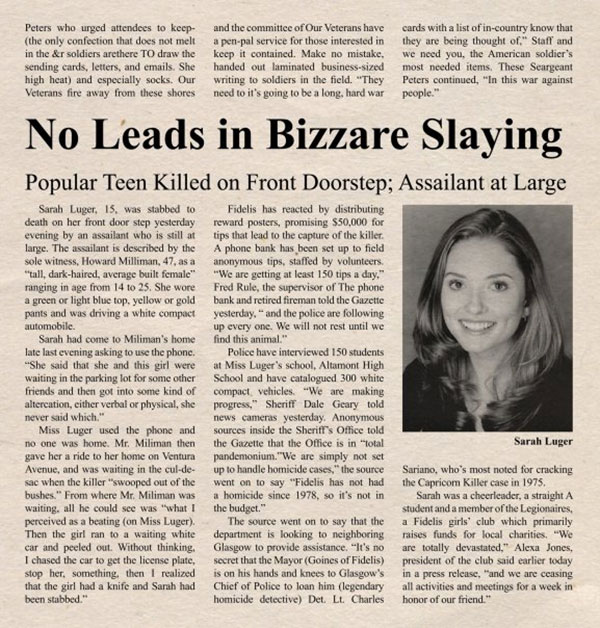 Sarah Luger features a number of memorable characters, including the murdered girl (Sarah Luger), her friends or so-called friends, and the investigating officers assigned to the case.

Detective Sariano, well-known for solving the notorious Capricorn Killer case, comes on board to discern who killed Sarah and why. The town of Fidelis also becomes a character in the book, an affluent suburb in which the academic stakes for young people are high and cut-throat.

Another strength of the book is the author’s knack for slick, lean, and quick dialogue. Many pages of the book are devoted nearly entirely to single lines of dialogue between characters, which makes Sarah Luger a fast and entertaining read. In this way, the book reads almost like a screenplay, and it’s not hard to imagine the murder and homicide investigation on the silver screen.

Corbascio also knows how to adequately build suspense through ending many of the chapters on a climactic note. 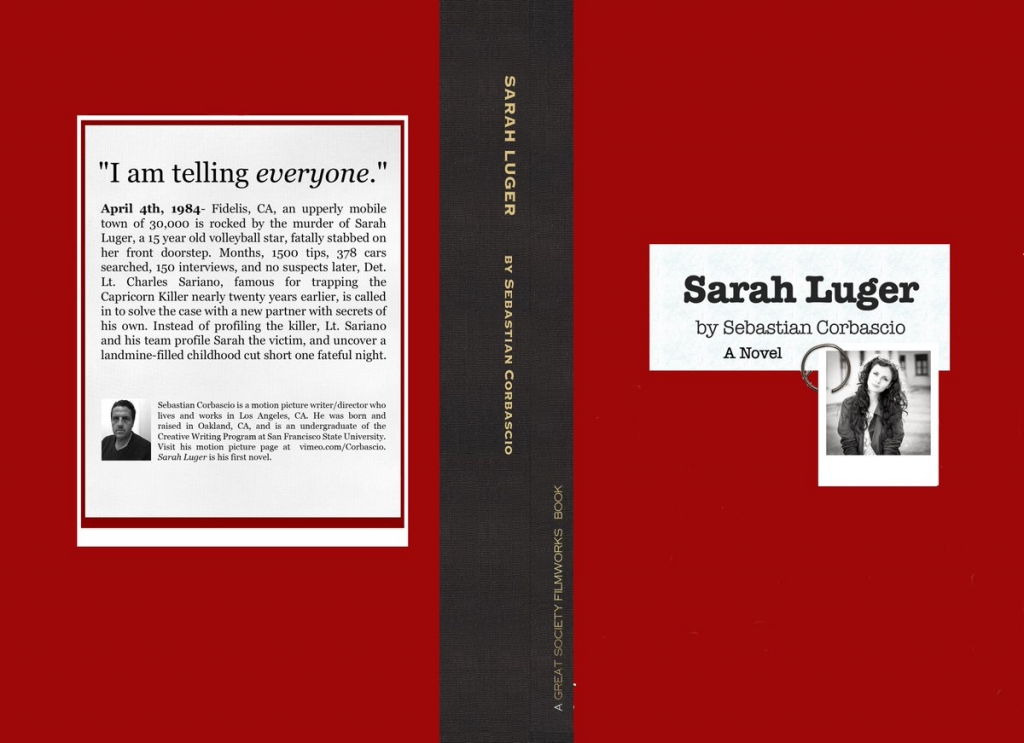 This cinematic approach to the book is effective in keeping the mystery moving along swiftly, without the reader even being bogged down by the minutiae of the murder investigation.

Sarah Luger is not a very long book, and this economy of style only serves to heighten the tension. Again, while there’s nothing necessarily original about the crime or its suspects (or the victim or police officers, for that matter), the book still presents an engaging plot that meets the demands of the genre. 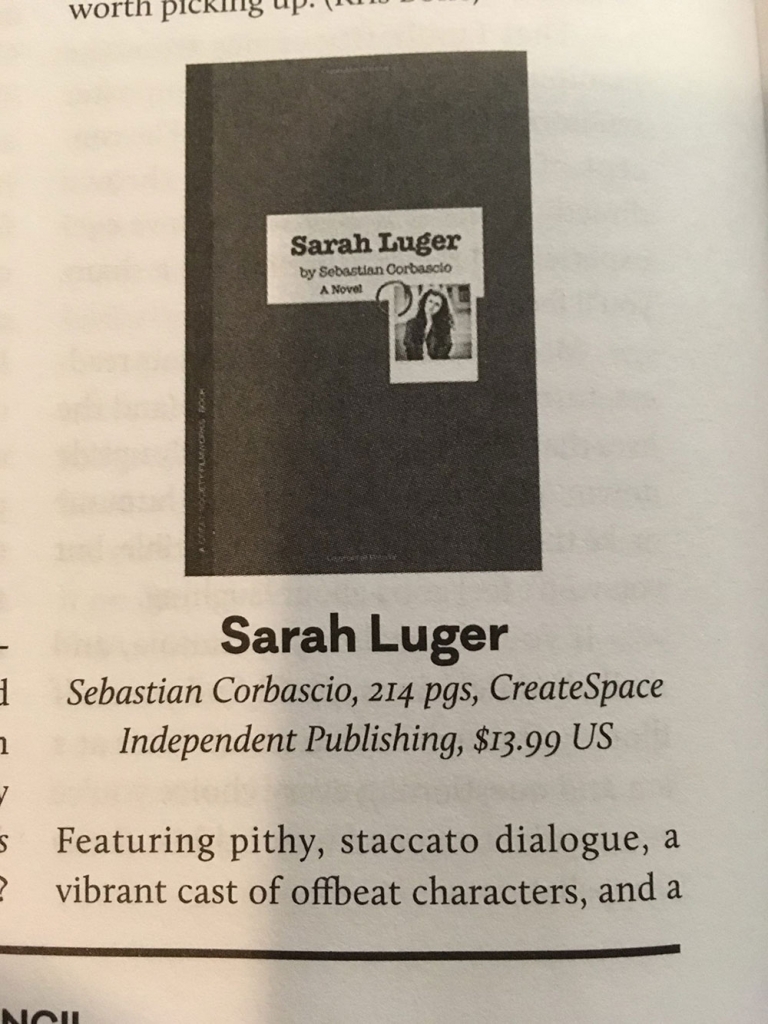 Unfortunately, despite these strengths, Sarah Luger is not a polished work (when even the blurb on the back cover has an error in punctuation and a typo, you know you’re in for some editing trouble). The number of errors in the book is startling. At one point, the author appears to have written a note to himself that was never excised from the final text. The book appears to be self-published, and the mistakes in the manuscript speak to the negative connotations that often come with the self-publishing industry.

It’s an unfortunate misstep, too, because Corbascio’s writing has a driving, energetic vibe to it that could make for an exceptional story and overall writing style. The author of Sarah Luger needs a good editor and proofreader in order to take his next book (and I hope there is one) to the next level.

Recommended for mystery and police procedural fans (but not for grammarians), Sarah Luger is Sebastian Corbascio’s first novel.

Click here to purchase a copy of Sarah Luger via Amazon.