Every town has urban legends. In “Pickaxe”, one town’s legend comes back to life, leaving a bloodbath like none other in its wake.

If nudity and a high kill count are all you want in a movie, you could do worse than Pickaxe.

Pickaxe is the kind of movie people watch with a few drinks and a few friends. Its attempts at parroting the 1960 style “sexploitation” movies are not in vain. There is enough full-frontal nudity in this movie to make your most perverted friend blush.

The movie takes place years after a quickly discussed lakeside massacre that left only one survivor and a distant relative of the deceased alive to deal with the pain. The core of the story revolves around a group of high school students who are loosely connected to the initial massacre by their friend, Heather, (Ashley-Marie Zgabay) the aforementioned relative. Most of the other characters are useless to the plot, existing solely for awkward sex scenes, crude jokes, and increasing the film’s incredibly high body count.

It is hinted that the film’s villain, Alex Black (Jayson Champion, Kodie), came back to finish the job by killing Heather and the lone survivor of the initial attacks.

The target audience of this film is apparent since it leans heavily on nudity and sexual innuendos, but not all jokes are without heart.

The movie delivers some solid one-liners that revolve around sex in some way. And the film stands by its raunchy humor long enough and well enough that, by the end of the film, you find yourself laughing at just how crass it can be. I would call this a huge success. Kevin Smith himself would be proud to see a splash of stoner toilet humor interjected in a movie that draws similarity to some of his greatest films: Clerks, Jay and Silent Bob Strike Back, and Dogma.

While many low budget/low quality films can rely heavily on sexual implications to get a view, some forget that you also need an interesting enough story and quality acting to keep an audience engaged.

Pickaxe manages to create a compelling enough story that is driven by its two most talented characters.

A. Michael Baldwin (the Phantasm franchise) plays Sheriff Matthews, a man who is trying his best to keep his small town — and himself — together. His character feels like a combination of Sheriff Brody (Jaws) and Lieutenant Don Thompson (Nightmare on Elm Street). Whether this was how it was written or how Baldwin portrayed him, Matthews exudes a hidden understanding of the events and an even deeper guilt about them, which adds a depth to his character not often found in these styles of film.

Tiffany Shepis (Victor Crowley, The Night Watchmen) plays Adrienne, a drunkard and possible lunatic who happens to be the only survivor of Alex Black’s massacre. Her delivery of a damaged alcoholic is quite good despite the setbacks of those she interacts with.

The main story consists of these two characters tracking the killer while their conflicting personalities and deep-seated feelings for each other are always at odds. Their tension drives the only real suspense in this movie and deserved more screen time. 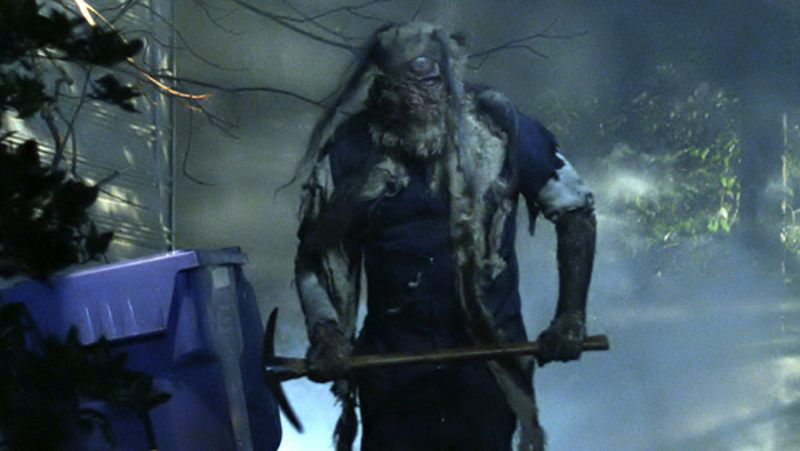 Breaking a movie down into its good and bad qualities can be tough.

Some movies are inherently good, while others are just plain bad. Some movies tread the line of so bad they are good. Pickaxe muddles around in a fun little grey area, like many other indie slasher films before it.

The movie has enough splashes of real life in-between all the tits to keep most people watching. While Pickaxe certainly isn’t for everyone, there is plenty of appeal here for those who like to dive headfirst into the bad/low budget horror scene. I rate this movie a soft 2 out of 5 with a warning: don’t watch this movie expecting to be blown away by anything.

Grab some snacks, some friends, and enjoy this wild ride of a movie for what it is, simple entertainment. You could do a lot worse than Pickaxe, so why not give it a chance?