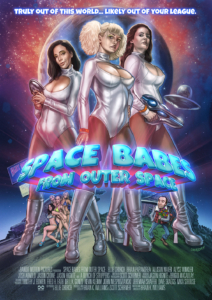 The edgy boutique production company hailing from Indiana wrapped principle photography earlier this year on their Sci-Fi sex comedy, Space Babes From Outer Space. This is how they pitch it:

“Three women from a faraway galaxy come to Earth in search of sexual energy to fuel their ship. With the help of a lonely farm boy, they attempt to harness enough sexual arousal to return to their home planet, all while evading their natural enemies, the bloodthirsty Scrotes!”

Now, that description demanded another read when I first saw it. A second read and a hearty laugh later, I peruse the stills and trailer for this feature and become increasingly interested — especially when I note the talent in front of and behind the camera. Space Babes From Outer Space is written and directed by the co-founder of Bandit Motion Pictures, Brian K. Williams (his first feature film was Time to Kill in 2014).  A man of many talents, Williams has also worked in the areas of editing, cinematography, and composing on various features, short films, and music videos.

Fellow Bandit co founder and award-winning filmmaker Scott Schirmer, who stunned audiences with his first feature, the horrific coming-of-age screen adaptation of Todd Rigney’s novel FOUND, is also a key player on Space Babes. He’ll be taking on the work of producer, director of photography, and co-editor alongside Williams. With these two talents at the helm, the quirky and out-of-this-world tale promises a good time.

The incredibly talented team behind Clockwerk Creature Company will be working on the creature and puppeteer for the film, having previously worked on the ultra-violent FOUND spin-off Headless, as well as Schirmer’s film Harvest Lake.

I’ve really become a fan of Bandit Motion Pictures, and appreciate their passion for making thought provoking Independent cinema on their own terms. I will continue to look forward to each and every one of their productions. They have carved themselves out a ‘family’ of sorts up there in Indiana, and it’s quite refreshing to see. We all can become extended members of this family as well by helping support the efforts from the bunch at Bandit.

Be sure to keep an eye out for Space Babes From Outer Space, which is expected to hold its world premiere screening in May. But fans can pre-order a copy of the film now at igg.me/at/spacebabes. Pre-ordering is the ONLY way to get a copy signed by all three ‘Space Babes’ (Ellie Church, Allison Maier, & Alyss Winkler). In addition, by supporting the film, you’ll have the opportunity to get your name in the credits and on IMDB. You can also get free access to watch previous films PLANK FACE and HARVEST LAKE on Vimeo.