While visually striking and richly detailed, “Hallowed Ground” is an overlong occult melodrama that never quite takes off.

Occult horror films, especially those that feature fictional cults doing the devil’s work in the middle of the woods or in an abandoned barn somewhere, must be masterful in their execution in order to truly cause chills and terror in the audience. Ben Wheatley’s Kill List is one such film, combining elements of the crime and horror genres to deliver a climax involving an isolated setting, masked cultists, and a shocking murder that is gut-wrenching to watch.

Miles Doleac’s Hallowed Ground, while boasting a colorful visual palette and a compelling storyline, takes occult horror in the opposite direction.

It ultimately comes across as more of a melodrama than a frightening horror film. With awkward dialogue and lengthy, drawn-out scenes that bring a halt any tension or suspense, the film struggles to live up to its strong setup. 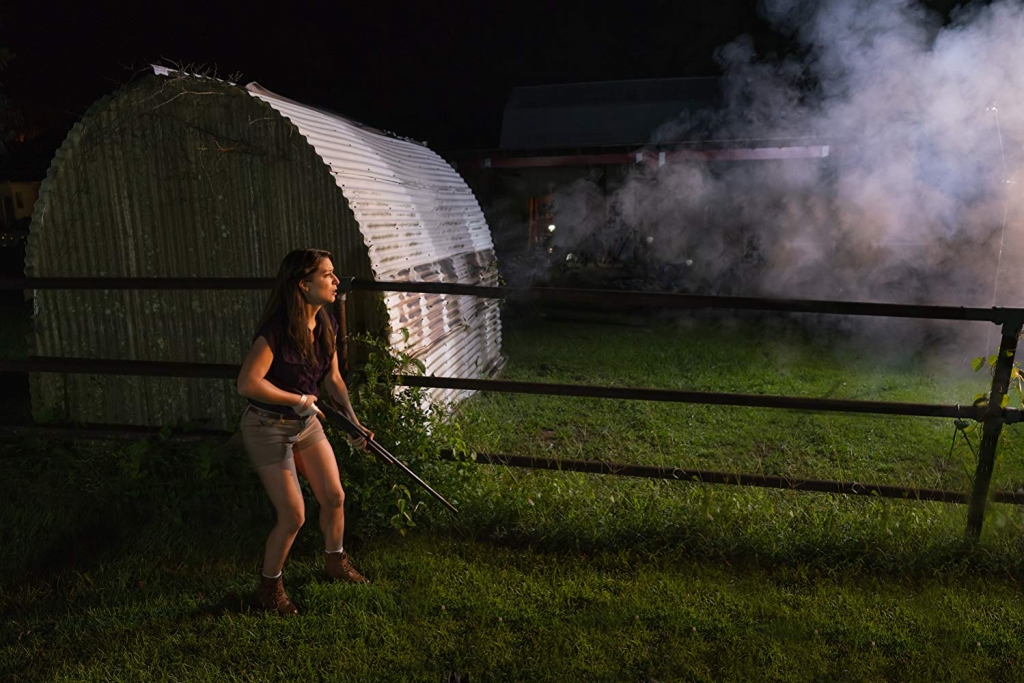 Hallowed Ground tells the story of a married couple, Alice (Lindsay Anne Williams) and Vera (Sherri Eakin), who decide to vacation in a picturesque cabin resort in order to reconnect and hopefully heal the wounds of their fractured relationship.

Prior to the events depicted in the film, Alice had engaged in an extramarital affair with a sleazy photographer, an act of betrayal that has forced Vera to grow distant and has made physical intimacy between the two nearly impossible. Right from the opening scene, Alice and Vera are strikingly at odds, making the viewer question how or why these two ever got married in the first place.

Alice scoffs at the fact that the land near the resort belongs to Native American owners and contains rich symbolic meaning. Vera, on the other hand, seems more sensitive, listening attentively as Nita (Mindy Van Kuren) explains the history of the area. Later, the couple attempts a night of lovemaking only to find themselves in an argument about their desires and interests. These scenes establish a conflict between the characters that only intensifies when the film’s tone shifts from romance to horror.

Much to the surprise of Alice and Vera, a gang of red-robed racists and torturers have diabolical plans for the Native Americans, and Alice and Vera get caught up in their violent battle.

What follows are several scenes of intended suspense and occult violence. But Miles Doleac (who also penned the script and stars as the principal cultist) has a tendency to draw out scenes with hokey dialogue and repetitive action. What’s more, the choice to give the cult members bright red robes, headdresses, and deer antlers to wear diminishes whatever threat or menace they could ever impose upon the audience.

Visually, the film looks great. Michael Williams’ cinematography is clear and steady. The performances (especially those of the two leads and Van Kuren) are confident and the bloodshed looks crisp and sharp. But the film needs editing in order to heighten the suspense and cut away the fluff (the running time is close to two hours; 90 minutes might have been about right).

For those interested in occult themes, Miles Doleac’s Hallowed Ground is worth seeking out for its imagery, unique storyline, and strong female leads.

The revenge aspects of the final sequences might also appeal to audiences who prefer a little action with their horror. In the end, while the film has its share of stumbles, there might be just enough here for genre fans to enjoy.

Want a second opinion? Click here for an alternate take on Hallowed Ground.