Tyler Savage’s Inheritance is a technically impressive film with an interesting and captivating story – a stellar debut from a very promising filmmaker. 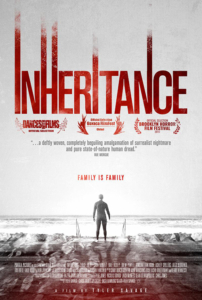 Inheritance tells the story of Ryan and his fiancé, Isi, after they are left a beautiful beach house by Ryan’s newly deceased father, a man Ryan thought died long ago. When the couple visits the home they learn that it’s valued at 2.5 million dollars and have intentions to sell the property and look forward to financial freedom.

Things take a turn when Ryan’s curiosity about his father leads him to explore the home and talk to some of the neighbors and this curiosity leads him down a dark path that opens him up to a terrible, generations old family history.

Old black and white pictures of generations past are shown as the opening credits play and as the film begins we see construction like boards being cut and shovels digging up the ground.

This opening sets the tone immediately for the rest of the film: upheaval.

The past is dug up and unearthed and reborn. The slow pace of the film matches the tone beautifully as the script assembles the story like a puzzle, showing one piece at a time every so often. The filmmakers smartly allowed the film to take its time to construct the story and allow the tension to build in an effective and compelling way.

What adds to the tension is the fantastic score from Mini Mansions. The music is a very focused, very tense and ominous sound that underlies almost every scene. The score also features distant drums that slowly grow louder and beat like an overworked heartbeat working both as an auditory symbol of dread and as a sound of something coming to life, something becoming unearthed. The combined effect is a fantastically unsettling feeling.

When Ryan inherits the house, he also inherits its history — and the feeling that Ryan is both an invader in a place he doesn’t belong and a prisoner to that place as well permeates every scene of the film.

Coinciding with this feeling is a lot of imagery of bars and lines that resemble a cage or being imprisoned. There are also a lot of open doors in several scenes, suggesting that Ryan wants out of the house and to escape the dark family history that seems to be consuming him.

The lingering spirits of Ryan’s ancestors visit him cerebrally and slowly fill his mind with dark thoughts. He soon becomes consumed with the evil curse that haunts the property and runs through his bloodline. During these visits is when the puzzle pieces of the story are presented in intriguing and eerily poetic visuals. Ryan gets caught up in the heinous family history and slowly learns that he cannot escape the past.

The production value, music, script, and wonderful cinematography are enough to make Inheritance worth watching — and also enough to elevate it above the flat performances from the actors involved.

I will concede that the supporting cast doesn’t really have a lot to do with their characters, but Chase Joliet as Ryan doesn’t possess the intensity or emotional range to successfully portray a character in his situation. He doe—s his best, but the performance never seems to match the quality of the film he is in, and that the production is strong enough to overcome that says a lot about the talent of the filmmakers and writer/director Tyler Savage.

Want a second opinion? Click here to read an alternate review of Inheritance.