While fun and creepy with some great atmospheric visuals, “THE NUN” doesn’t quite live up to its claim as ‘the darkest chapter in The Conjuring Universe’. 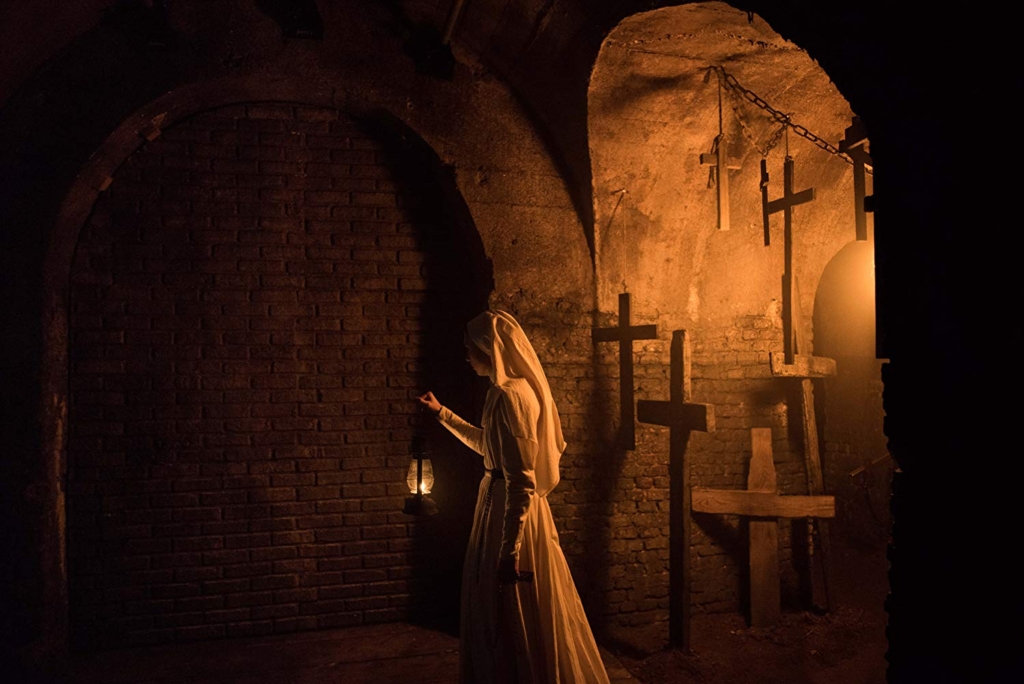 Warner Bros. hasn’t had the success they envisioned with their DC Comics Extended Universe movies, but thanks to director James Wan, the studio’s lineup is now studded with hits and fan favorites. Wan’s first movie based on the case files of Ed and Lorraine Warren — THE CONJURING — has spawned a plethora of sequels and spinoffs, including a direct sequel with a third movie in production, two ANNABELLE movies with a third in production, a movie based on the brief character The Crooked Man in THE CONJURING 2, and the recently released THE NUN.

Of course THE NUN is also based on a minor, but visually striking character from THE CONJURING 2. The series of movies, now called The Conjuring Universe, is one of the most successful franchises in horror movie history. While all may not have been a critical success (looking at you ANNABELLE), all the movies have been a hit with moviegoers. 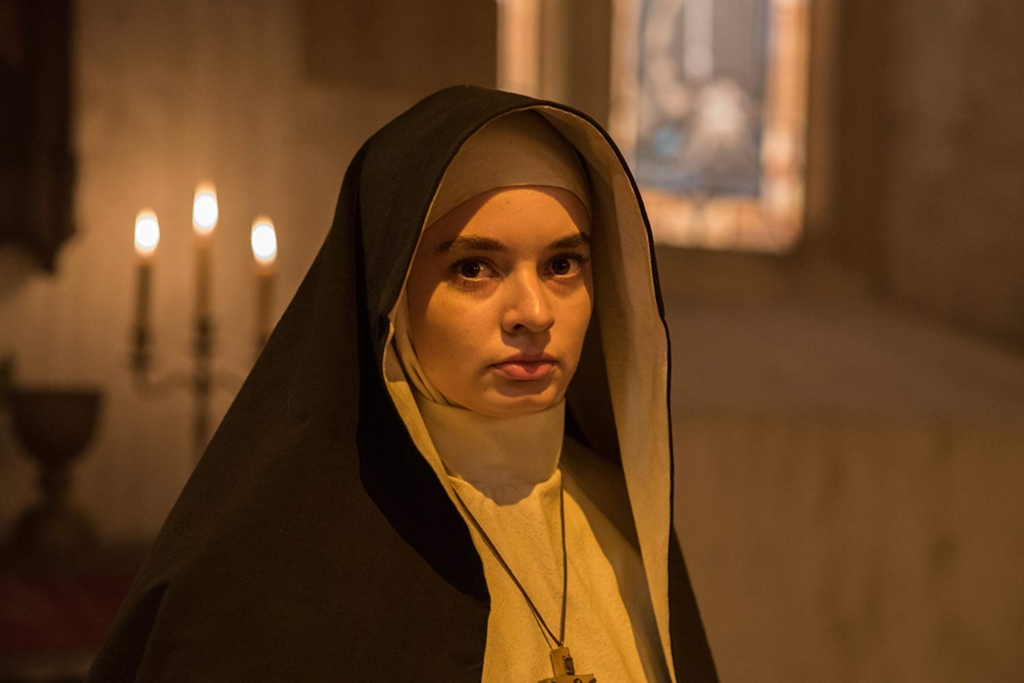 THE NUN opens with two nuns in a remote cloistered abbey in Romania. In an incredibly tense scene, the nuns are trying to retrieve an artifact from a room. The door to the room has a sign on it that says, “God ends here.” Things don’t go the nuns’ way, and the scene ends with one of them hanging herself from a second-floor window.

News of the nun’s death reaches the Vatican, and they send one of their miracle investigators, Father Burke (Demian Bichir), to investigate the incident at the abbey. The leaders at the Vatican assign a young nun to assist Father Burke in his investigations. Sister Irene (Taissa Farmiga) is a nun who has yet to take her vows to the sisterhood, but Vatican officials believe she has something to offer the investigation other than helping gain access to a place that would normally be off limits to men — even a priest. 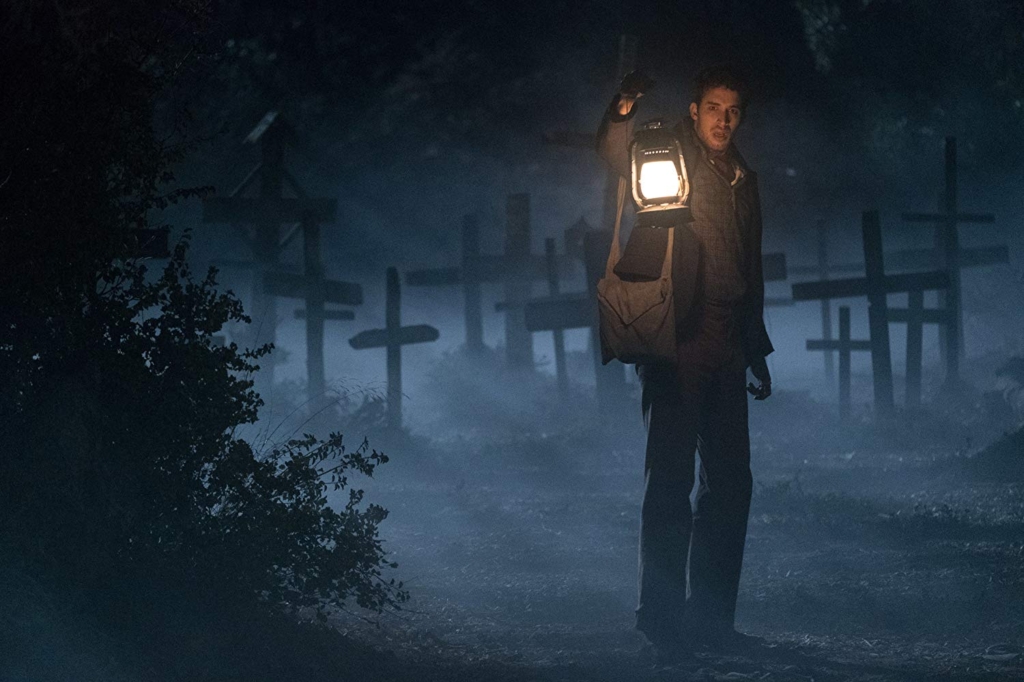 Upon reaching Romania, Father Burke and Sister Irene meet up with a local farmer named Frenchie (Jonas Bloquet) who had discovered the hanged nun. Frenchie takes them to the abbey via a horse and buggy, along the way explaining some of the town history and the villagers’ fear of the abbey. It’s when the trio reaches the abbey that the investigation begins and, for moviegoers, the fun begins.

It’s not too long after arriving that the demon nun Valak (Bonnie Aarons) starts to torment the investigators, and we soon learn that Valak needs a human host to inhabit so she can leave the abbey grounds.

I’ve read several reviews for THE NUN, and what stands out is that the movie evokes a kind of Hammer Horror or classic Universal Horror aesthetic with its use of lush forests with dirt roadways and an eerie looking castle that looms over a nearby village.

I too was impressed by the locations in the film, the look of the abbey, the graveyard on the abbey grounds, and the Romanian forests. It helps that Frenchie travels by a horse-drawn carriage to evoke that Hammer feeling. If you watched just one Dracula movie starring Christopher, you know Hammer loves their horse and carriage scenes.

The abbey itself, the surrounding grounds, and attached convent are atmospheric and chill inducing. The buildings and grounds look old, well worn, and haunted. If the abbey was local to me, I can see me and my friends daring each other to investigate, but making sure we did so during the day.

THE NUN combines atmospheric, chilling terror with a number of jump scares. 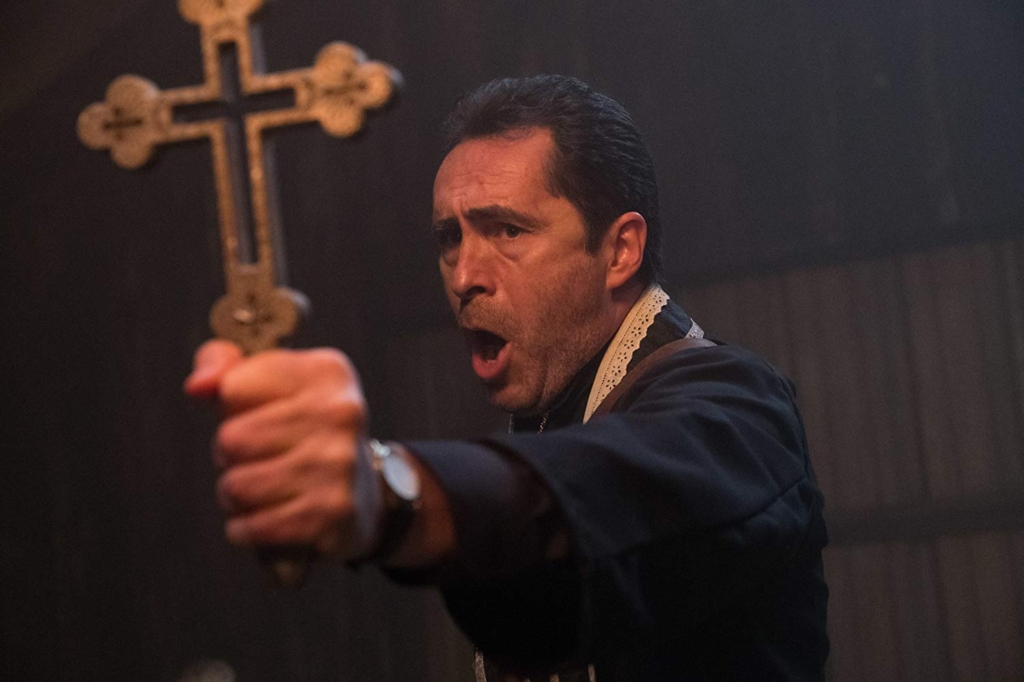 Some of the jump scares are predictable, others are not. Based on your tolerance for this type of scare it may be too much, but I didn’t really consider them out of place or hokey while I watched the movie.

Taissa Farmiga and Demian Bichir are excellent in their roles. Farmiga’s Sister Irene is a bit of a wide-eyed innocent nun, but there are hints to a darker past. Like Irene, Father Burke has a darker past, but he’s very Mulder-like in his search for the truth of what’s happening at the abbey. Burke has an open mind as a Vatican miracle investigator, and he has a drive to complete his work no matter what supernatural roadblocks come to meet him.

There are a few issues I had with THE NUN. Valak, while a visually interesting character, doesn’t have a lot of motivation aside from being a demon who wants to leave the abbey grounds. Does she have some grand scheme out in the world? Does she simply want to poltergeist the hell out of the local villagers? Or does she need converts? All the answers aren’t needed, but knowing more of the motivation for Valak would have been nice.

Another issue I had was with Sister Irene’s character. The movie, as stated earlier, hints at a darker past but it never comes into play. The movie also makes sure that the audience knows Sister Irene hasn’t taken her vows yet. There are probably as many mentions of her absent vows as there are jump scares. This should lead up to something big, especially when finally she does take her vows before the climactic battle with Valak.

The scene is set up and played like Sister Irene is going to get powered up by the vow-taking, like she’s going to become Mortal Kombat Nun or Father MacGruder from DEAD ALIVE (“I kick ass for The Lord!”). But it never pays off in any meaningful way, or really at all. She’s still the Sister Irene we’ve come to know throughout the movie. It’s a shame too, because this is where writer Gary Dauberman and director Corin Hardy really could have taken THE NUN to another level of horror craziness (in a good way, of course).

All of this leads to the biggest issue I have with THE NUN: the ending. 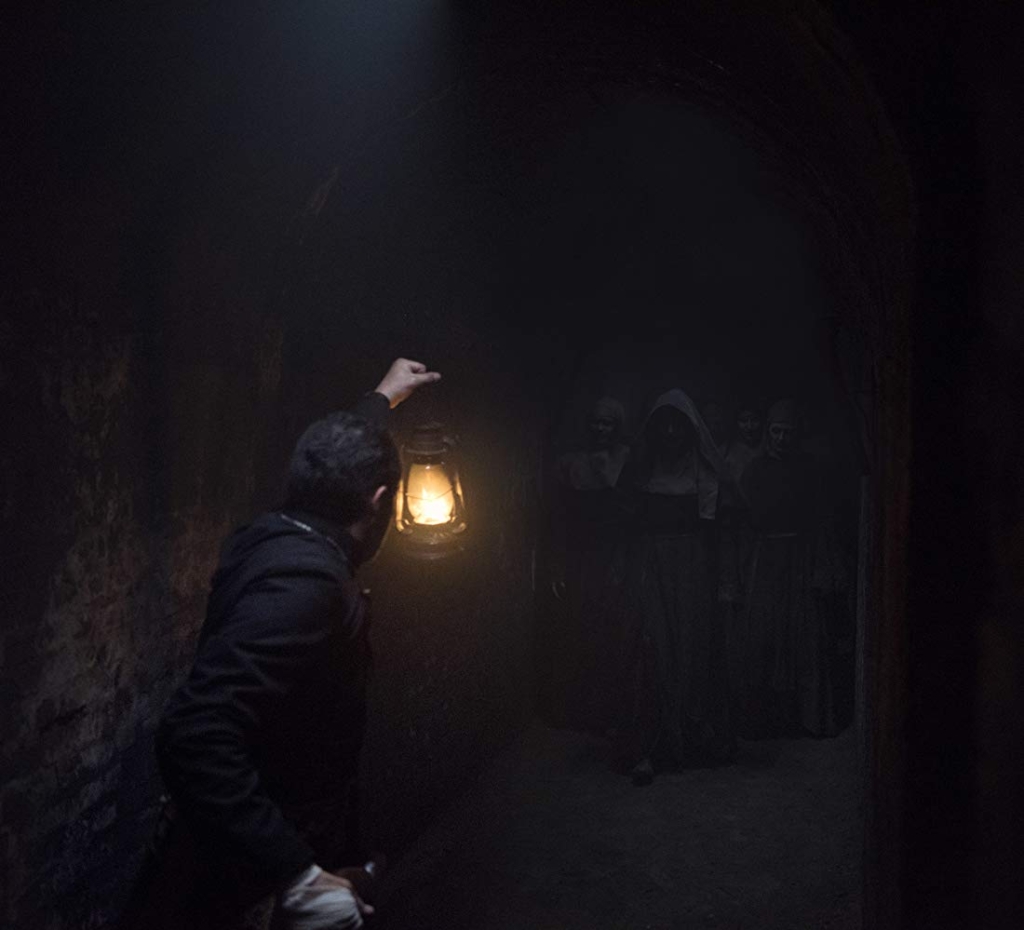 The terrible, awful, dumb, head-scratching ending. The idea that Dauberman and Hardy created to defeat Valak is pretty solid, but it’s executed very poorly. It’s also a bit of a too on-the-nose homage to the Indiana Jones movie franchise. What should be a tense and frightening moment in the final battle between Sister Irene and Valak ends up as a laugh-out-loud scene.

Honestly, it would have been better if Sister Irene had screamed out “mortallll combaaaaat!” than what is shown on screen. In defense of the ending, I think Dauberman and Hardy were trying to tie the defeat of Valak to a ritual act the villagers do to ward off evil, but it just comes off as hokey.

As bad as the final fight is, the ending of THE NUN is nearly saved by the tie-in of Valak to THE CONJURING in the pre-credits scene. The way that the two stories and histories are tied together is very well done, and nearly made up for a pretty bad ending.

Later, the same night I had watched THE NUN, I decided to watch the Italian nunsploitation film THE OTHER HELL. I didn’t intend to compare the two movies, but after watching THE NUN, I wanted some more freaky, scary nun action. What I realized as I watched this Italian schlock fest was that THE NUN was almost too tied to THE CONJURING and its movie universe. 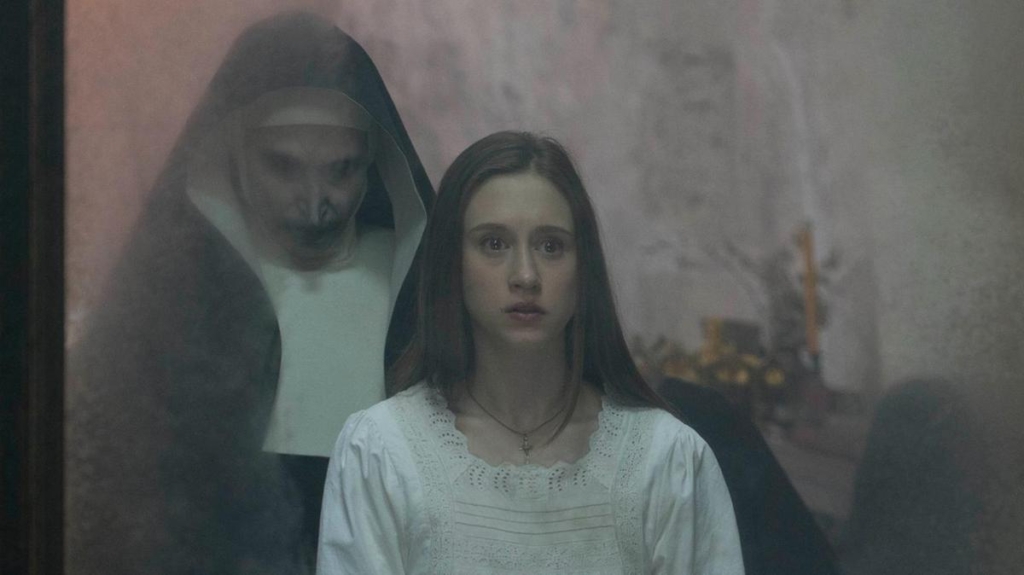 THE NUN seems to be inspired by some of the classic nunsploitation movies of the past, and Hardy should just dive right into that aesthetic. Throw crazy amounts of Hammer Horror red blood around, have shots of birds flying into shot for no reason, make the story completely incomprehensible, and make the movie look grainy. Maybe the fans of THE CONJURING wouldn’t have liked it or flocked to it as they did the current version of THE NUN, but it might have been an artistic jolt the franchise needs to shake it from its sameness.

I don’t think there is a future for sequels of THE NUN, but there is a potential for a franchise of movies involving Father Burke and Sister Irene as a kind of Mulder and Scully of the Vatican. THE NUN is set in the early 50s, Burke is established as a Vatican go-to priest for investigating supernatural phenomena that’s related to the Church, and he has a good partnership with Sister Irene.

If the studio decides to go this route, I think they may have themselves a pairing of characters that rivals the Warrens in popularity.

Want a second opinion? Click here for an alternate take on The Nun.