The world premiere of Sonia Escolano’s “The House of Sweat and Tears” brings a beautifully filmed yet tragic tale based on true events. 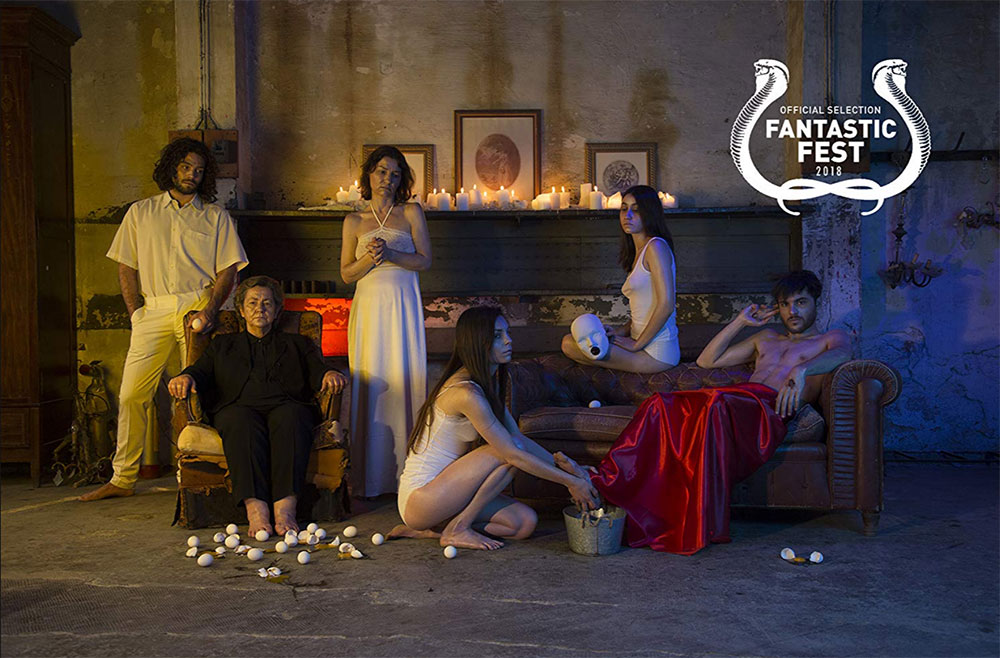 House of Sweat and Tears (Casa de sudor y Lagrimas) is only one of several films at this years Fantastic Fest hosted by the Alamo Drafthouse that is directed by a woman. The Fest has always seemed to embrace foreign and female filmmakers, but with the additional focus on this for the current Fantastic Fest, it appears that even more of a female faction shall be celebrated in Austin, Texas — and hopefully the world.

The Spanish film, presented by Rock Salt Releasing, involves an iron fisted matriarch of a religious cult (superbly played by Haydee Lysander) and her attempts to remain in control of her followers as a stranger appears and questions arise within the group.

Escolano’s tale is dark and tragic, highlighting how this ‘Mother’ extinguishes all the inner light from within each of her disciples to achieve a level of dominance and suffering. It is also based on a factual cult operating in Spain during the 90s.

Opening with an intense plea-ridden, yet almost vile sermon via SHE, the tone is set for House of Sweat and Tears. In what almost seems like a subterranean lair, the small flock of unfortunates devour every word and direction She makes. The darkness of their congregation matches the spark left in each, as we witness the fevered loyalty almost all exercise.

Instead of holy foot cleanses, each participates in shards of glass crudely cut within their flesh. Instead of blessed feasts between fellow practitioners, we witness imaginary indulgences into favorite foods. SHE is psychologically vicious, asserting her stronghold by particularly effective speeches and humiliating others in grand fashion, initiating responsibilities and practices that create an incredible amount of stress and worry.

While the unrelenting leader is housed with electricity and other luxuries in life, the rest are housed in a cavernous space, living each day in a false sense of fulfillment.

Glimpses of who some of these people were before the cult are layered throughout the film — and at times offer a refreshing sense of what remains true. Most are so far gone, so wrapped up in what She demands, that they have lost their sense of individualism and rationality. We see that some were lost to begin with, while others joined to find a community of love and acceptance.

All of this is done too, with limited dialogue. ‘House of Sweat and Tears’ is a beautifully acted and directed film, with the bulk of emotions emerging from facial expressions, body language, cinematography (Pepe de la Rosa), along with an unnerving and complimenting score (Carlos Ruiz, Javier Angel Morillo).

But HER reign is beginning to crumble as Emma, one of the most genuinely good and devout followers, presents a prophecy for the leader to exploit. Expressing herself in scathing whispers to Emma, SHE terrifies the woman — planting a seed of extreme fear and doubt within her and ultimately causes her demise.

“The Devil is a very clever bastard.”

SHE whispers menacingly to her follower. The departure of Emma raises concerns in some and elicits a visit from a mysterious stranger — igniting the fuse for a slow burn through the bowels of Biblical nonsense, with a blatant disregard for what is really right.

Sonia Escolano’s feature debut is thoughtful and brilliant in its artful execution, a finely crafted film that will hopefully lead to much more work from this talented filmmaker.