While the well-acted “Master” is a decent and decidedly watchable film, many viewers may wonder who exactly this film was for. 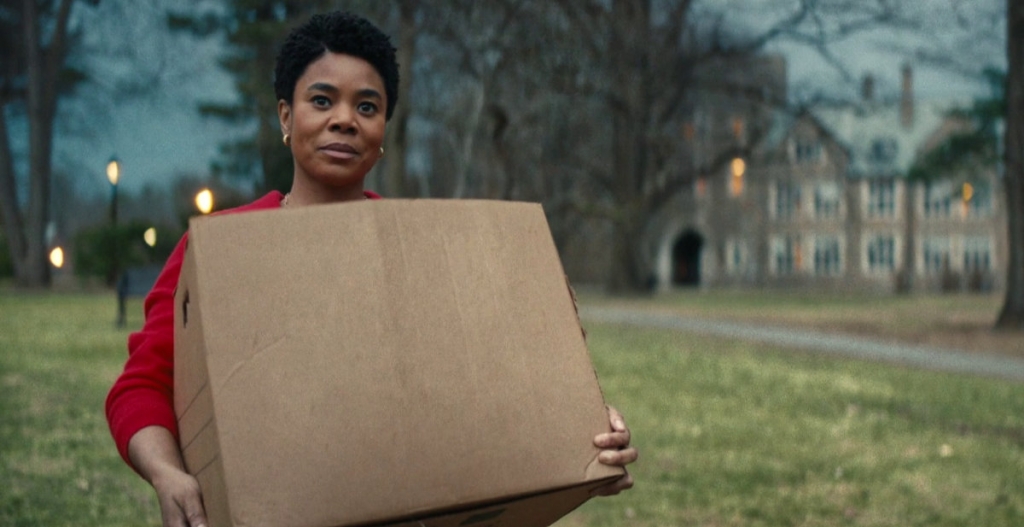 Modern horror dramas like Jordan Peele’s Get Out and Us are more than just great films that leverage the real-world horrors that come alongside being black in America these days. They’re also trendsetters that have inspired a lot of similar pieces in the years since their debuts – some better than others, of course – and Amazon Prime’s recent horror film Master is one of them.

Master is brought to you by first-time director Mariama Diallo. It stars Regina Hall (Scary Movie) and a supporting cast that includes Zoe Renee, Amber Gray, Talia Ryder, and others.

The film is set on the campus of the fictional Ivy League school Ancaster. Gail Bishop (Hall) has just been appointed master, making her the very first black person to hold that position at the school, and is in the process of learning the ropes. Meanwhile, Jasmine Moore (Renee) – a young, black freshman who only just arrived – is doing her best to settle in across campus.

However, as Ancaster is a predominantly white campus, Ivy League life predictably turns out to be challenging for both Gail and Jasmine in ways they probably didn’t bargain for.

For instance, Jasmine is mocked and harassed by her white classmates with such casual malice that it makes your skin crawl. Meanwhile, Gail deals with comparisons to Barack Obama and a chilly relationship with another female staff member of color.

And, of course, Master wouldn’t be a campus-set horror film without some sort of urban legend as part of the mix. In this case, it’s the belief that Ancaster is haunted by the ghost of Margaret Millett, a woman accused of witchcraft and subsequently hanged nearby hundreds of years ago.

The campus is also believed to be cursed, as evidenced by a former student’s choice to hang herself in Room 302 back in 1965. (Room 302 also happens to be Jasmine’s room.)

Master progresses through a series of reveals and turns you’d expect from a horror story of this type, eventually arriving at a twist ending that is interesting, if a bit ineffective.

As a drama film, it works well enough.

The film is undoubtedly well-acted, with Regina Hall and Zoe Renee shining especially brightly in their respective roles. However, there aren’t enough scares to make this work as a genuine horror film, despite the inclusion of a clear evil presence that may or may not be the ghost of a former witch hunt victim.

And although Master does a good job addressing some of the racial aspects of the plot, it’s done in an uncomfortably pessimistic way, even for a horror movie.

As you’d expect with any race-based premise, this film incorporates plenty of microaggressions. However, none of the ones portrayed would be news to most socially conscious viewers, let alone anyone of color who happens to be watching.

The characters of color also disappointingly lack the depth fans of Get Out or Us might be hoping for here.

At the end of the day, Master is certainly watchable. But it doesn’t seem to hit the mark its creators were aiming for. (It’s definitely not on the same level as anything Jordan Peele ever put out there.)

This film doesn’t quite know what it wants to be, and it isn’t clear what it’s trying to say about race in America.

I recommend Master if you’re in the mood for something new, but just make sure your expectations aren’t too high.