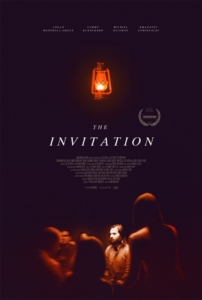 Before you continue reading, you should know that The Invitation is a movie best seen with no prior knowledge of its plot or characters. That being said, keep reading if you are just that interested in what this independent film has to offer, free of spoilers.

To some, The Invitation may not be classified as a classic horror film; it may be a drama or thriller with horror aspects. Despite this lack of a clear genre, any horror fan who can enjoy a well-made film with a slow burn will absolutely be excited about The Invitation.

Director Karyn Kusama’s fourth feature film is a strong entry to her portfolio, not only in the way she builds tension between characters and for the audience, but also in the beauty of this disturbing movie. We get the closest thing to a jump scare that the film has to offer early on, with most of The Invitation moving slower than one might expect. Just because this movie is slow paced does not mean it is boring — Kusama, working with the brilliant screenplay by Phil Hay and Matt Manfredi, introduces one mystery after another and the movie is not lacking in payoff.

The movie’s premise stems from dinner party hosts Eden (Tammy Blanchard) and David (Michiel Huisman) returning to Eden’s Los Angeles home after not having had contact with any of their friends for two years. That in itself may set off alarms for some, but the movie ramps up suspicion through deliberate dialogue and visuals. The reason for the hosts’ absence from their friends’ lives isn’t kept a mystery for very long, but it also creates more questions than it clears up.

We get to know the personality of each of the characters attending the dinner party over the course of the film, but as an audience, we never stray from identifying with the main character Will (Logan Marshall-Green). This is a film built largely on subtle body language or facial expressions, but the tension is palpable from the very beginning. This can of course be accredited to the writers and director, but the acting in The Invitation is also something to be lauded.

Yet another thing adding to the atmosphere of this film is its outstanding score. The music is upfront just when it needs to be, but often fittingly lurks in the background of a scene, just barely noticeable.

The result of all these elements coming together is a movie that deserves its rave reviews, despite a limited theatrical release at the same time as its VOD release. It’s hard to get across the impact of The Invitation without spoilers, but believe me when I say this is a film you should not pass up.