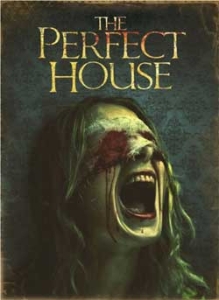 The Perfect House (2012) is an anthology film inspired by three of the most famous time periods and subgenres of horror. This feature film is actually three mini films (four, if you count the wraparound that connects the various stories). Each story chronicles the macabre events surrounding three different homeowners of the same house.

The film begins rather oddly by setting up the third installment of the anthology before the opening credits, and then giving us the introduction to the wraparound story that ties the rest of the film together. After the opening, we meet a young couple being shown a house up for sale by a weirdly, overtly sexual female real estate agent. It’s far more silly than scary, but I sense this was the filmmakers’ attempt at injecting a little levity into an otherwise extremely dark and brutal film and paying homage to popular anthology films of the past (Creepshow, Tales From the Crypt, Deadtime Stories).

As the couple tours the home, we get shown three different stories via flashback about three previous owners of the house.

Story one is a suspense-driven tale about a dysfunctional spending a night in the cellar, where they attempt to hide from a violent storm as well as from their own dark secrets. From there, the violence ramps up considerably as we head into story two, a 80s style slasher with elements of dark comedy. This vignette tells the tale of a demented serial killer with a taste for torture. Story three centers around a spoiled suburban family and a disgruntled neighbor who decides to exact some bloody revenge in retribution for the perceived sins of the family.

Each story involves murder, but the motives behind the murders are all very different—ranging from unspeakable family secrets to senseless and chaotic evil to Saw-like moral judgment. This film is not for the faint. There’s some seriously disturbing and twisted material on display here, including brutal and grisly deaths combined with controversial elements such as incest, rape, torture, and child on child murder.

In addition to the subgenre films The Perfect House was paying obvious homage to throughout, I couldn’t stop thinking about season one of American Horror Story (Ryan Murphy and Brad Falchuk). That season, appropriately titled Murder House, also featured several disparate, multi-generational tales of terror woven together by a single thread—a central setting for all the horror throughout the years. In The Perfect House, as with Murder House, the house itself becomes a central character and the primary antagonist.

I went into this film’s viewing knowing practically nothing about it, except that it starred one of my favorite genre actresses, the lovely FELISSA ROSE, and fellow Sleepaway Camp alum JONATHAN TIERSTEN. That fact alone made this indie horror film worth a watch, and these two both delivered stellar performances. Rose proved why she is scream queen royalty, shining as the terrorized matriarch of the doomed family in the film’s third, final and most disturbing segment. Tiersten was inspired as a psychotic madman with a penchant for creative torture in the film’s second installment.

I have a sincere affection for indie films, even those that miss the mark or don’t quite come together how they should, because of the considerable passion and dedication it takes to bring the filmmaker’s vision to life.

In that regard, it’s impossible not to respect the efforts of director RANDY KENT and writer/co-director KRIS HULBERT to bring The Perfect House to the masses. This film was truly a labor of love, shot in a matter of days on an extremely tight production schedule and a shoestring budget. Apparently, the filmmakers had to beg for every single dollar, borrowing money from family members, taking out second mortgages and depleting their retirement funds. Circumventing traditional distribution methods, The Perfect House holds the distinct title of being the first film to be distributed via Facebook.

From a technical standpoint, it’s impressive what Kent and Hulbert have managed to do on such a microscopic budget. The film generally looks slick and professional with great visuals and realistic special effects.

The Perfect House is far from perfect. Like most anthology films, it’s a bit uneven and lacking in several areas. The tone is all over the place, and the ending falls flat. However, it feels fresh and inventive and well-crafted overall. This is a solid first attempt and a great showcase for these talented filmmakers, giving us an intriguing glimpse of what this team is capable of given the right time and resources.

This micro-budget, truly independent film offers a unique and clever twist on the anthology horror subgenre. Despite its limitations and flaws, this is an entertaining film with a strong cast, considerable bloodshed and great practical effects, and surprisingly high production values.