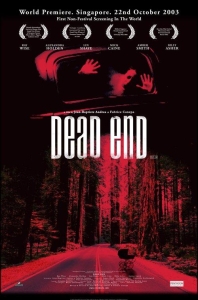 Dead End is a 2003 French horror film directed by Jean-Baptiste Andrea and Fabrice Canepa, made with a budget of only $900,000.

I didn’t know much about this movie before watching, except that it starred the absolutely brilliant Ray Wise (Twin Peaks, Digging Up the Marrow) and the equally incredible Lin Shaye (Insidious). And I think knowing so little about what to expect, untainted by the usual hype and media overexposure that tends to ruin many other viewing experiences, really helped enhance my complete enjoyment and excitement I felt while watching this film. With that said, I will do my best to keep this review lean and hit only the highlights of this simple but exceedingly entertaining film.

The plot is simple. A family is driving to grandmother’s house for Christmas. The father, in an attempt to combat his boredom, takes an unexpected detour from the usual route. This takes them down an isolated road in the middle of nowhere, where they encounter a strange woman in white and her baby. This seemingly chance encounter marks the beginning of a series of unfortunate events for everyone involved.

Dead End succeeds where so many others fail, by focusing on the basics and never losing sight of the type of film it wants to be. It’s a very straightforward story with a tightly written script and well-developed characters. The film makes use of a very small cast of exceptional actors. There’s enough dark humor and well-written interpersonal dialogue to give the film depth beyond standard horror fare.

As a serious gore aficionado, it’s rare for me to appreciate a film that shows so little. However, in the case of Dead End, the subtlety really works. Given the strength of the cast and the high caliber performances, we gleam so much from the actor reactions to the implied brutality. And the suspense and horror is actually ramped up by the lack of explicit onscreen carnage.

Dead End has echoes of a classic Twilight Zone episode, with a sophisticated, modern sensibility. Directors Andrea and Canepa bring an atmospheric, tense and effectively stylized approach to the film. The entire film takes place in a car driving down a long stretch of road, yet the filmmakers managed to maintain strong visual interest throughout. The overhead shots of the car driving down a deserted road in the middle of the woods are exquisite and appropriately foreboding. And the monotony of the unchanging scenery helps to reinforce the desperate and frustrating situation the characters find themselves in.

This is a rare horror gem that is character and plot driven, while being legitimately tense and scary. It’s inventive, intelligent, and manages to be both funny and frightening. The actors deliver layered, multi-faceted and memorable performances. Ray Wise and Lin Shaye are nothing short of perfection. Whether you see the ending coming or not, it’s still satisfying and well executed.

Dead End is a genuinely suspenseful and entertaining thrill ride that is clever and well-written, anchored by outstanding performances and compelling characters.