Reel Review: We Are Still Here 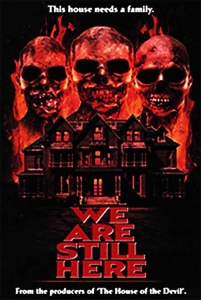 The film opens with Paul Sacchetti (Andrew Sensenig) and his wife Anne (Barbara Crampton) moving into a new home, following the tragic death of their son Bobby in a car accident. Immediately after moving in, Anne is sensitive to her son’s presence in their new home. Paul is skeptical and quick to downplay Anne’s otherworldly feelings. However, he goes along with her wish to have their spiritual friends, Jacob (Larry Fessenden) and May (Lisa May), over for the weekend to attempt to connect with Bobby from the beyond. Unfortunately, their new home is harboring much more sinister forces, as well as a dark and dangerous secret.

We are thrust immediately into a familiar scenario, strongly reminiscent of Ti West’s brilliant House of the Devil. The film has a definite retro feel, combined with the ominous interactions with neighbor David (Monte Markham) and the creepy reveal of the house’s tragic history, making it readily apparent that it was heavily inspired by Lucio Fulci’s The House by the Cemetery. In fact, numerous characters in the film are named after characters or people associated with Fulci’s 1981 classic.

I really enjoyed this movie. I went into this viewing like I do with all movies, with relatively low expectations and an open mind. I was genuinely surprised to learn this was director Ted Geoghegan’s feature film debut. He skillfully avoids many of the common pitfalls encountered by other first-time filmmakers. We Are Still Here is a beautiful, well-crafted slow burner that builds to an unforgettable and extremely bloody climax. In the last half hour, all hell breaks loose, leading to a thrilling and satisfying ending. The practical effects are quite good. There is minimal CGI, and it is seamlessly integrated.

In the interest of a fair and balanced review, this film is not perfect. There are some plot holes, the script was a little weak in parts, and there were a few shoddy camera shots. With all that said, please do not let those minor flaws dissuade you from seeing this effectively creepy and quite competently made film. It benefits from strong direction, great visual effects, and an appropriately disturbing atmospheric quality. It also boasts a solid cast. Crampton shines, Sensenig provides a solid anchor for the film, and Fessenden is always a joy to watch.  While some viewers may require more nonstop action, the film’s initial slow pace helps create effective tension and makes the climactic payoff all the more satisfying.

This marks the second onscreen collaboration between Crampton and Fessenden, the first being Adam Wingard’s 2011 home invasion thriller You’re Next. Crampton turns in another memorable performance as the matriarch of a troubled family who finds herself at the center of a proverbial shit storm (Castle Freak, You’re Next, We Are Still Here). Possible new subgenre?