Satan, Sexploitation, and the Saving of Lost Cinema: Review of THE SATANIST

I had the immense pleasure of obtaining tickets to a screening of Zoltan Spencer‘s ultra obscure 1968 sexploitation film, The Satanist, previously thought lost for decades. Thanks to Alamo Drafthouse and the American Genre Film Archive (AGFA), this newly found and extremely rough 35mm cut was available to experience in all its black and white glory.

Even genre/obscure film expert and host Joe Ziemba—art director and programmer for the Alamo Drafthouse and creator of BleedingSkull.com—had not yet seen the film, explaining that we’d all be watching it for the first time together.

The Satanist is about a young couple’s marriage that becomes threatened when an attractive female occultist enters their lives, enticing them into a strange world of drugs, sex, and satanic rites. Each reel of the viewing I attended was about 20 minutes long, with some damage to the sound on the third reel and damage to the picture quality in parts of the first and second reels. However, that didn’t seem to phase the crowd or dampen anyone’s enjoyment of this newly discovered film treasure.

The film begins with a prologue informing us that “the events of this film are based upon annals of witchcraft as practiced in ancient times…and today.” We then get a strange introduction with a man very much resembling Doctor Scott from The Rocky Horror Picture Show, explaining he recently had a ‘nervous breakdown’. Now when I say say resembles, I mean REALLY resembles—complete with smoking pipe, wheelchair, and a blanket over his lap. He explains, “Perhaps I am mad. Maybe you can help me decide whether my story happened or is the product of an incurably sick mind.”

The story starts with an intimate revelation into a couple’s love life, the Doctor Scott lookalike (yet to be wheelchair bound) and his wife. It is complete with horrible porn music in the background and the uncomfortable feel of lovemaking without love. However, it’s still well shot despite the time of filming and grainy celluloid. The man’s voiceover continues to tell us that, after his breakdown, his doctor ordered him to stop working (he’s a writer and can’t help but sneak time with his typewriter) and to avoid a strenuous social life. Thus, the couple makes the decision to move to the country so that he can recover from his breakdown.

The crux of the tale really begins with an accident involving the couple in their car and a very attractive female neighbor on her bicycle. After the accident, the neighbor invites the couple back to her apartment. The couple immediately concern themselves with the manner in which she has decorated her apartment—strange and vaguely occult statues, books and paintings adorn her humble abode.

The neighbor seems to attempt a friendly gesture, letting the husband borrow a book from her collection. He is intrigued by the small black leather bound book and begins reading excerpts from the book later that evening. According to the book, the carnal pleasures of Man are the most simplest and base, but also the most truthful. Modern society has denied the need of certain fundamentals of life, deeming them as Evil and reprehensible. “Why deny who you really are?” asks the author of the book. 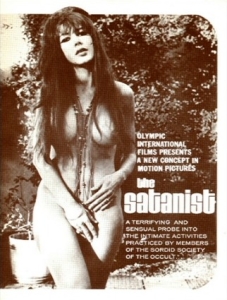 Obviously, this puts some strange thoughts into the man’s head. Later, he wanders over to the sexy neighbor’s house and peeks in the window, where he sees her performing a sex ritual with another woman. After reading more of the book, he begins to have strange and vivid sexual dreams. He vows to avoid all future contact with the neighbor, but his wife reminds him that they previously committed to having dinner at her house.

The evening of the dinner, the “innocent” couple are the guests of honor at a Satanic black mass. Both the husband and wife are drugged. The husband is forced to watch his wife engage in various sexual activities with other men, all donning the Satanic-like headdress of a goat. “May the Devil have the fruit of this embrace,” they would all chant during these scenes.

I really don’t want to say much more about the plot, in case any one else gets to experience this enjoyable film. It was dark, demented, and slightly cheesy. But, I honestly loved it. I think this was the first sexploitation film to include Satanism as a subtext. Information on the film is scarce. W.C. Meadows is credited as editor and Director of Photography, while Spencer is credited as writer and director.

The film is slow moving with minimal music and virtually no character dialogue (instead, we get the writer narrating the story in voiceover as the sole voice heard during the film). Despite being considered technologically obsolete at the time, the film’s black and white photography is striking.

The screening I saw was from the only known existing 35mm print. It has not been screened for audiences since 1971 at the latest. There are probably no more than five prints of the film ever made. It was incredible witnessing this piece of film history.