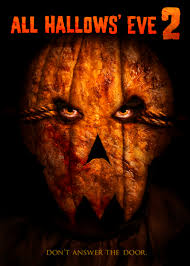 All Hallows’ Eve 2 (2015) is the “sort of” sequel to 2013’s All Hallows’ Eve (reviewed HERE). However, while the two films share a common wraparound premise that features a collection of anthology-style short stories presented on a VHS tape that mysteriously arrives at someone’s door, it’s not really a sequel in any true sense of the word. And, much like the first film, it’s not a very traditional anthology film either.

Instead, All Hallows’ Eve 2 is a gathering of eight previously released horror shorts, with a wraparound that very loosely ties them together. While the first film really centered around its primary evil-doer, the genuinely creepy Art the Clown, this film makes no reference to Art and instead keeps the focus primarily on the short stories. All Hallows’ Eve boasted a very strong wraparound story and much weaker shorts, while this film is entirely the opposite. In this case, the wraparound story is flimsy at best and feels tacked on in an attempt to connect the shorts. But it really doesn’t add much at all to the film.

Like most anthology films, the eight shorts vary in quality and entertainment value. But, for the most part, there’s a pretty solid selection here that makes the film worth watching. Most of the stories are extremely short, in the 5-10 minute range. That means, if one of the shorts falls flat, you’re on to the next one quickly. Below is a quick overview of the segments (without revealing any spoiler-related plot points).

DESCENT (2004, written and directed by Jay Holben and Christopher Probst)

A woman witnesses a horrific murder and later finds herself trapped in an elevator with the killer. This is an especially entertaining segment, one of the strongest, with an intense setup and a rewarding payoff.

This is a fun and extremely gory entry that focuses on a boy and his babysitter carving pumpkins on Halloween night. It’s got a great twist ending that really takes you by surprise.

This Argentinian short has a decidedly Unfriended vibe, focusing on creepy post-mortem communications via Facebook. It’s well done and feels like it would work as a longer feature.

Laced with black humor, this story focuses on that one neighbor who always has the best, most realistic Halloween decorations. Only, in this tale, there’s a darker and more sinister explanation for Mr. Tricker’s decorating prowress.

This tale follows the house-to-house exploits of four young trick-or-treaters who seem more interested in doling out tricks than getting treats. This is a fast paced story that has some great makeup effects. It wasn’t my favorite segment, but it’s well made and has some charm.

THE OFFERING (2013, directed by Ryan Patch and written by Michael Koehler)

Short and fairly straightforward, this segment features a father and son who travel deep into the woods to make an offering to a mysterious force. Unfortunately, however, one of the key ingredients has gone missing. It’s predictable, but still enjoyable to watch.

M IS FOR MASOCHIST (2013, written and directed by James and Jon Kondelik)

At only 3-minutes long, this super short entry offers a glimpse of a sideshow carnival that relies on the sadism of men who are torturing a man strapped to a spinning wheel. It’s an interesting concept. But, due to the length, this one really didn’t have a chance to go anywhere or leave much of an impact.

A BOY’S LIFE (2011, written and directed by Elias Benavidez)

An imaginative young boy, traumatized by his father’s military absence, goes to great lengths to prove to his mom that the creature living under his bed is not just in his imagination. Although this one was quite competently made and very well acted, there were no real scares to be found.

A woman finds a VHS tape on her doorstep that shows a series of gruesome tales. But the real danger is the pumpkin-faced killer that’s using the tape to find his next victim. This is the weakest part of the film. It really only exists to allow the other shorts to be viewed.

This is less a cohesive film and more of a showcase for some very well done horror shorts. It’s definitely an interesting concept, and it’s a great way to get the work of some very talented directors out to the masses. There’s a ton of variety in the shorts, so there really is something for everyone. While I enjoyed some of the shorts more than others, none were failures by any means. Gore hounds should also appreciate the amount of blood and guts on display.

This is a well-curated collection of eight independent, high quality horror shorts. It falls flat as a complete film, but the talent on display from each of the independent directors and writers is commendable.