Adapted from a novel, “The Ritual” is a modern folk horror with alternative tropes that is effective in many ways — delivering on both scares and subtext. 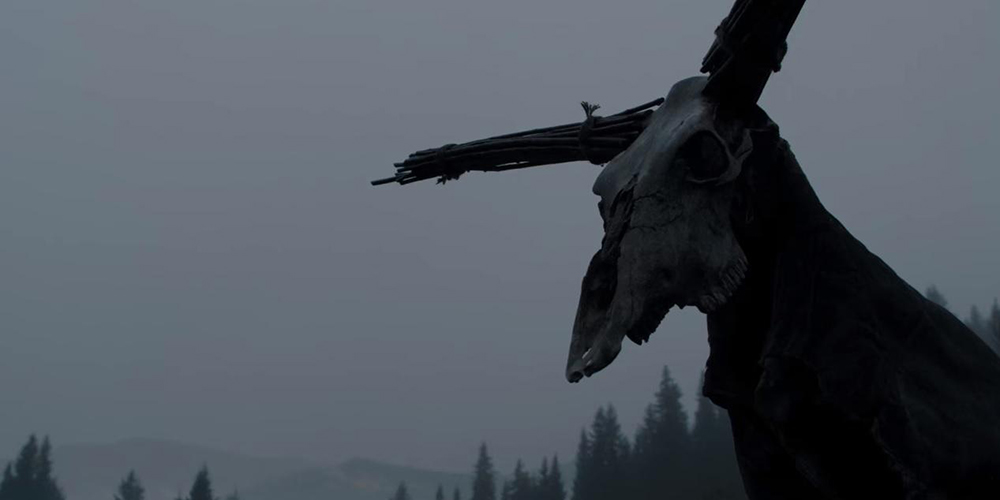 Folk horror is one of my favorite sub genres. And although not explored deeply by the mainstream horror audience, The Ritual provides enough familiar tropes for everyone to enjoy.

The Ritual is a 2017 British supernatural horror film directed by David Bruckner and written by Joe Barton. It stars Rafe Spall, Arsher Ali, Robert James-Collier, and Sam Troughton. The film is based on the 2011 novel of the same name by Adam Nevill. You can currently find the film streaming on Netflix.

The Ritual initially introduces us to four guys who look to be in their mid to late forties – somewhere in the UK. They all have very definitive character traits which define them as individuals. We’re sold the story that they’re all old friends from their university days. This didn’t quite ring true for me because of how different they are. But further education does often throw people together with differing interests and experiences, forging bonds which last. Still, these men are just a little too different to be believable on our first meeting with them.

Following a night out drinking, we’re immediately drawn to the softly spoken Irishman Robert (Paul Reid). He seems to be the focal point for the group, the shared interest that they all have in common. They discuss where they’re going to take a holiday together. Robert’s left field suggestion of hiking on the Sweden/Norway border seems in character for him. But is pretty alien to the others, who would seem to prefer Vegas or Ibiza for a typical pal’s getaway.

On the way home from the pub, Luke (Rafe Spall in a brilliant leading role) stops off at a convenience store to buy some liquor and coaxes Robert into accompanying him. It’s at this point our story is set in motion. The two friends unexpectedly disturb a robbery in motion. While Luke cowers in the back of the store to avoid detection, his morally superior friend attempts to intervene — and ends up getting murdered for his trouble.

Cut to six months later, and the remaining four friends are on the hike their friend dreamed about. None of them want to be there. It’s cold, barren, and simply not their idea of fun. They ritualistically say their goodbyes to their friend on a mountaintop before continuing their hike through the inhospitable grasslands. But Dom (Sam Troughton) badly twists his knee, forcing the group to divert their route and head through an ominous looking pine forest to get back to the lodge where their trip will culminate. 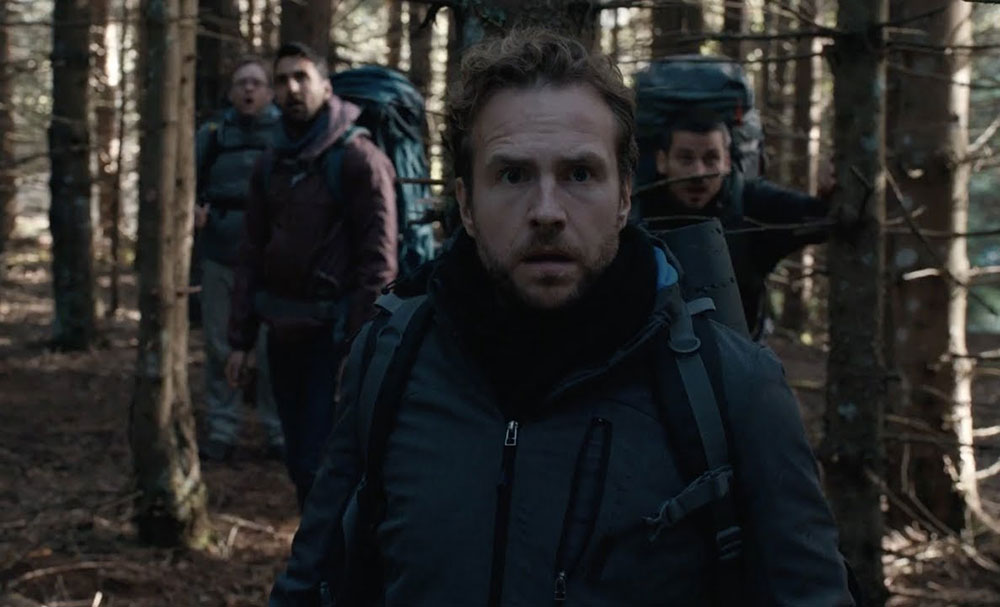 All the time, the interplay between characters is well done.

Dom and Phil (Arsher Ali) are both angry with Luke for not having made an attempt to save their friend. And Luke himself carrying an enormous amount of survivor’s guilt. The new fulcrum for the group appears to be the macho Hutch (Robert James-Collier), who openly tells Luke he doesn’t blame him for what happened. He seems to have a pretty good perception of how the more effeminate Dom and Phil handle themselves in difficult situations. Allied with Luke, Hutch takes charge and is always the sensible member of the party.

During a heavy rainstorm, the men stumble upon a seemingly abandoned cabin in the woods. Against their better judgement, they take shelter from the storm. Inside, they discover evidence of paganism, possibly witchcraft. And during the night, they all suffer horrendous nightmares and experiences.

From here, the holiday descends into more familiar territory as they’re picked off one by one by an unseen force, ending with two of them meeting a pagan tribe of people who worship whatever is in the woods. I won’t give any more away. But the moral of the story is firmly that you need to confront your inner demons if you’re to move on from them.

The film works on several fronts.

As an entry into the folk horror genre, it has some very positive merits, but ultimately reveals too much for my liking. As a stalk-and-slash film, it doesn’t quite perhaps hit the heights you’d expect. Thus, it kind of sits somewhere in between the two sub-genres, though not uncomfortably. 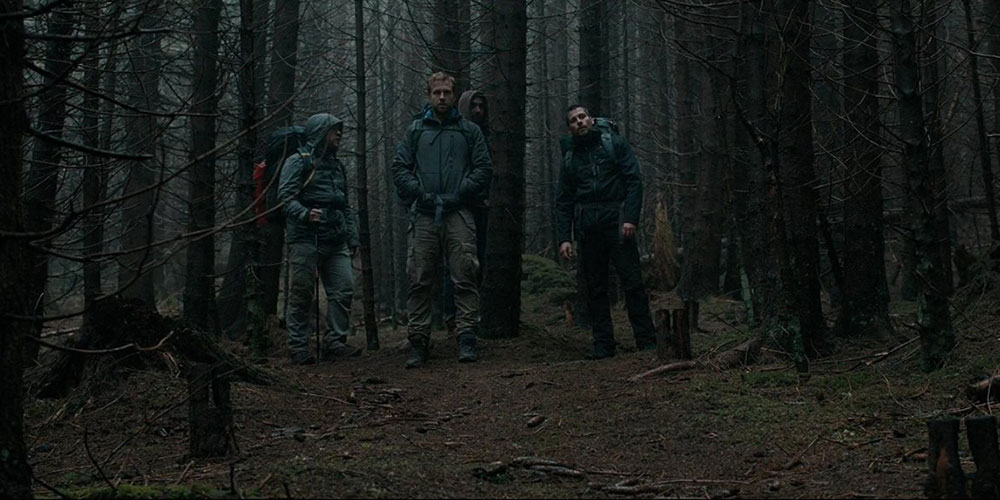 The performances are all excellent. Luke is compelling as a weak-willed protagonist, and Dom fulfills all of the expectations of his character. I would have liked a more pivotal role for Phil who seems an interesting character, and similarly, a bit more background on Hutch would have satisfied me to a greater extent.

The score is haunting enough to fit with the style and tone of the film admirably. And the production design is, at times, stunning – seamlessly blending Luke’s flashbacks of the convenience store with the very natural feel of the forest. It works brilliantly in that regard, tying the story together.

The direction is also worth a mention. David Bruckner does a great job of making you really care about these individuals, especially those who aren’t seemingly worthy of it. The tension in several of the scenes and their payoffs are very well done, and there’s enough intrigue until the final act to keep you guessing. 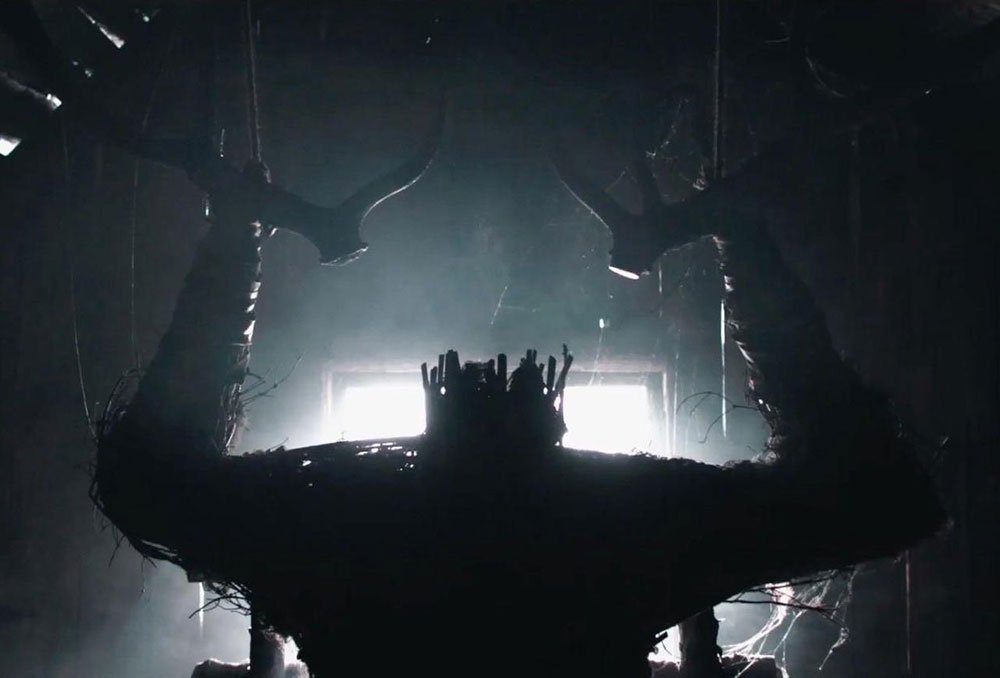 If I do have a criticism of the film, it is that final act though. It’s not always necessary (and almost never necessary in folk horror) to show the antagonist – and this film does suffer from doing just that. However, when it is done, it’s done well. The VFX crew have done a magnificent job on what is obviously a relatively low budget.

Overall I would recommend this film to those who enjoy a character-driven story —one that works best when you give it your full attention with the lights off.