Join us for a look back at forgotten VHS favorites from the video store era, one rental at a time. This month’s featured titled is “Spaced Invaders”. 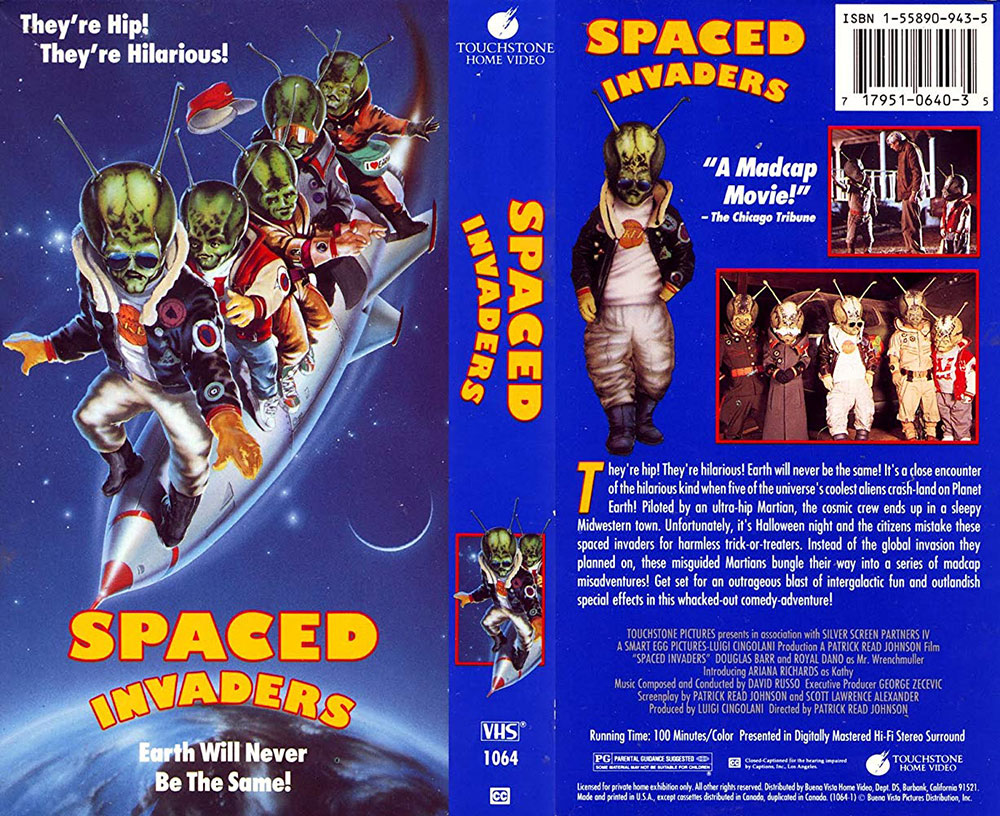 A little brown visitor from outer space who befriended a boy named Elliot created a decades worth of family friendly space-themed movies when E.T. premiered in theaters during the Summer of 1982. Young boys and girls in small, suburban towns across America befriended little visitors or had a space adventure of their own in several different films such as Explorers (1985), Flight of the Navigator (1986), Space Camp (1986), Mac and Me (1988), and countless others.

By the 1990s, kids began to lose interest in space-themed family adventure films, but not before a group of five goofy visitors from above crashed the box office one more time in the Spring of 1990 with a kids comedy/sci-fi alien flick called Spaced Invaders.

Laser guns and futuristic gizmos aside, when our fearless five-some first crash to Earth, they appear to be more of a rag tag group of attitude-fueled goofballs than anything resembling a higher intelligence. The 5 martians (Blaznee, Captain Bipto, Lieutenant Giggywig, Dr. Ziplock, and Corporal Pez) are a mix of Teenage Mutant Ninja Turtles and Gremlins, with a sprinkling of Muppets for that cutesy, family friendly feel.

Captain of the ship and leader of the group is Blaznee, who makes wise-cracks while giving his best Jack Nicholson impression.

Blaznee is the leader after all, the man- er, alien, in charge, and he is one cool cat, just like Jack.

The first human to spot these alien visitors is an old farmer out for a stroll with his dog named Mr. Wrenchmuller played by popular character actor Royal Dano. Dano was no stranger when it came to running into aliens while taking his dog for a walk. He had the same scene 2 years earlier in 1988’s Killer Klowns From Outer Space. Mr. Wrenchmuller is known around town as having more than one screw loose. And if Spaced Invaders took place at Crystal Lake and not Big Bean, Illinois, he’d be the brother that Crazy Ralph never had.

Dano starred in almost 200 TV shows and films during his 42 year career, including several with Jimmy Stewart, and passed away of a heart attack 4 years after Spaced Invaders in 1994.

Conveniently crashing to Earth on Halloween night, our little alien acquaintances go unnoticed by the oblivious human adults who think they’re just kids in costume, or rather, “cousins from California,” as one kid claims them to be. 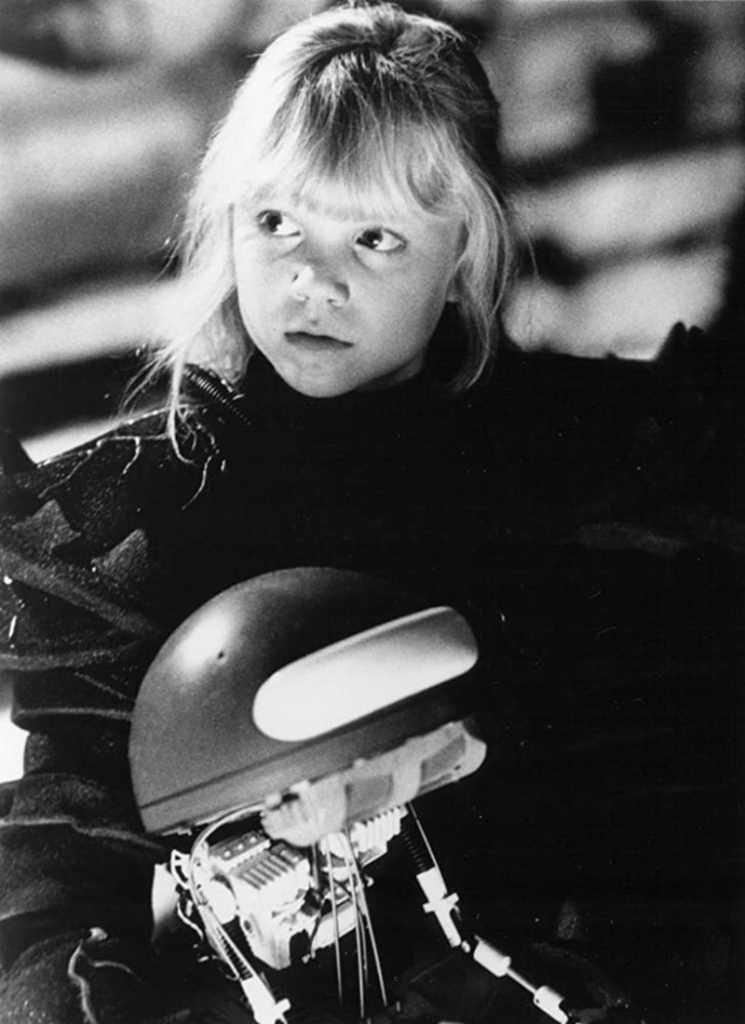 That kid is Kathy, played by a very young Ariana Richards, who 3 years after Spaced Invaders in 1993 would have a highly recognizable face as a star in one of the biggest films of the decade, Jurassic Park.

Richards gets an “introducing” credit during the opening credits of Spaced Invaders, which seems a little odd considering this was the young actress’ 4th feature film, including a speaking part five months earlier in 1989s holiday release of Prancer.

Kathy learns of the aliens by way of their lost scouting robot, an adorable pet-like contraption that clings to Kathy as if she is its original owner. Maybe the little bot takes a liking to Kathy because she’s the only kid dressed up like an alien for Halloween, and not just any alien, but the Xenomorph from Ridley Scott’s 1979 horror/sci-fi masterpiece, Alien. It’s a badass costume for a little girl to wear, especially when her boy trick or treating partner is embarrassingly dressed as a duck (you got outplayed on that night, my dude). The little scouting bot spills the beans to Kathy regarding the aliens’ plans for Earth: to invade and conquer!

This idea of invasion is what brings the martians to Earth in the first place when they overhear a “distress call” about an invasion happening, and they want in on the action. What they don’t realize is the signal they’re hearing is merely a radio broadcast from a radio station playing the old Orson Welles broadcast from 1939 of War of the Worlds. The call letters for the radio station are a slightly eye-roll inducing: W.E.L.Z. (get it, for Orson Welles?). But hey, a part of you has to appreciate such a corny little wink. 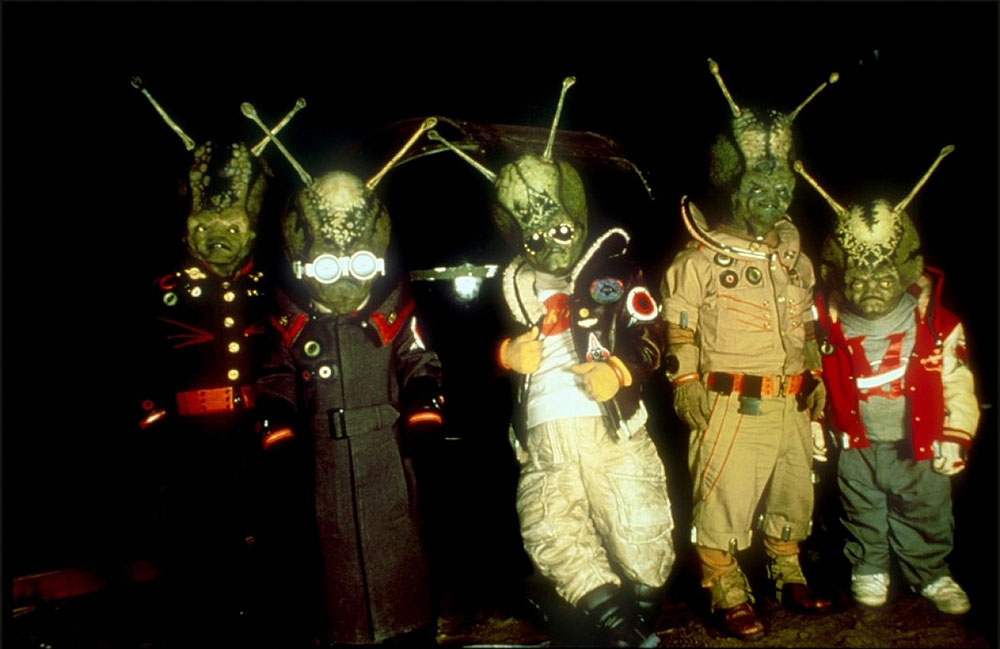 As for the martians, they do look pretty cool in their wonderfully constructed full body alien suits, looking more a part of every frame than anything even the best CGI could create. The actors playing the aliens were reportedly all but blind while in full costume, their bulbous heads blocking all vision. They had to be talked through several scenes in order to effectively move through them.

With bobbing antennae on their giant heads with moving eyes and mouths, the look of the aliens works well with the tone of the movie, which is a silly, kid-friendly adventure with plenty of eye rolling humor you can’t help but smile at. 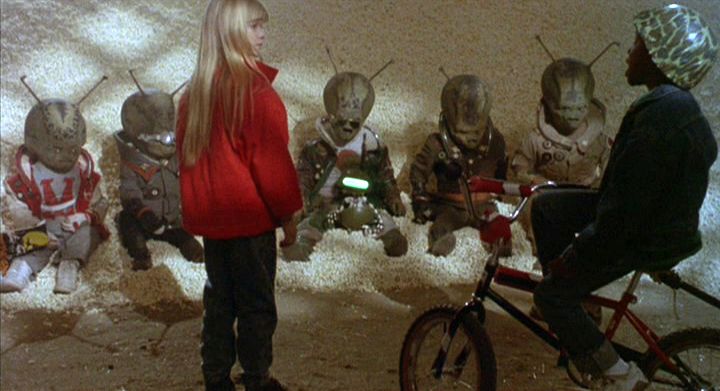 But Spaced Invaders finds its charm in the practical, b movie effects that the 1980s are known for — the ones that emulate the effects of the 1950s.

Part of this look is achieved by what is called “in camera” effects, a technique that manipulates film to create the desired effect directly on the raw film itself. Such effects as using matte paintings as backdrops with the focus concentrated on the foreground, using colored or darkened filters, and only partially exposing film so the un-exposed part can have a different image filmed on it are all examples of in camera effects used in the film.

Filmed in 1989 (just enough 1980s left to leave the decade’s mark on the film, but close enough to the 90s to infuse some of that new millennium attitude), Spaced Invaders used that magical location in California that Hollywood has been using to represent Midwestern, suburban America for decades: Pasadena. Well, 10 minutes from Pasadena in Altadena, California, to be exact. 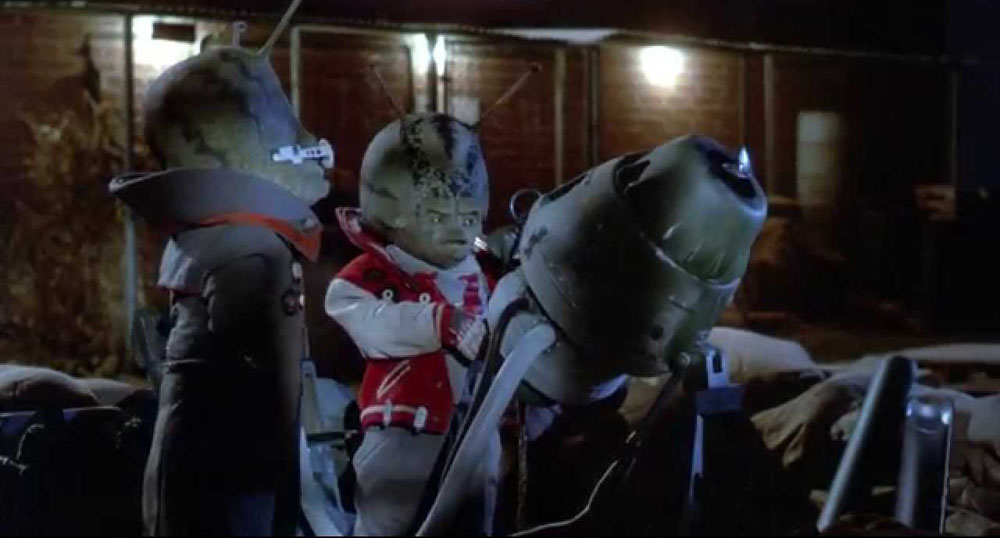 With production under the working title of Martians!!! (apparently it really did have those 3 exclamation points), the film would be the directorial debut of Patrick Read Johnson, a veteran practical effects man whose 1980s credits include the TV mini-series V, An American Tail, King Kong Lives, Bill and Ted’s Excellent Adventure, and Warlock. Most of this effects work involved models and miniatures, a skill that made him well-suited to take on directing duties for Spaced Invaders.

Released in theaters on April 27, 1990, Spaced Invaders had a strong opening weekend, bringing in $4.5 million and a top five finish at the box office (Pretty Woman was #1, even after six weeks). Not exactly an out of this world opening weekend haul, but with an estimated production budget of around $4 million, Spaced Invaders cleared its budget during its first three days in release, and would go on to bring in over $15 million, almost four times its budget. 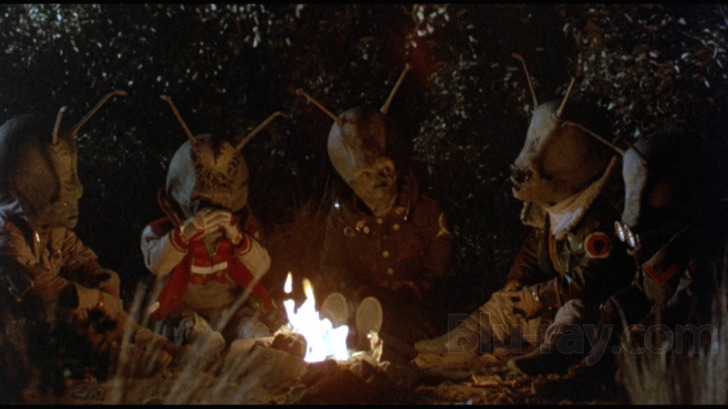 But it was short lived after his next two films, Baby’s Day Out in 1994 and 1995’s Angus (which reunited him with Spaced Invaders star Ariana Richards), failed to perform. To be fair, Angus is pretty great and slowly gained borderline cult status. And the soundtrack kicks ass.

Aside from filming techniques and admiring the practical makeup and costumes, there’s little for adults to really enjoy in Spaced Invaders as it’s definitely geared towards kids.

But maybe there’s still a kid in all of us, one who remembers seeing these goofy green martians riding a rocket ship like a surfboard on a VHS cover in a rental store but never got their parents to rent it. That kid can catch up and finally fill that little cinematic void from their childhood, the one that makes us say, “Wow, I forgot about that movie! I remember when that came out.”

Besides, in an age where nostalgia rules the day, Spaced Invaders is a charming and enjoyable trip down memory lane, even if it takes a crash landing detour from space to get there.

Make it a Double Feature!

Pair up Spaced Invaders with Explorers (1985), and instead of aliens crashing to Earth, follow a group of young friends up into space. Explorers was director Joe Dante’s follow up to his 1984 smash hit Gremlins, and is most notable as being the first feature film appearance of both River Phoenix and Ethan Hawke. Unfortunately, the family-friendly space adventure didn’t fare nearly as well as Dante’s furry creature comedy from the year before, bringing in less than half its budget in the Summer of 1985.

Explorers is imaginative enough and sparks the right nostalgic memories, being a genuine ‘kids on bikes’ movie. But the world visited while the kids are in space plays pretty corny for the most part. What do you expect in a kids movie? Explorers is still a nice look at the era of the 1980s. It’s intriguing, and it’s a bit bittersweet to watch a young Phoenix and Hawke.