Nothing on Earth (or from outer space) can stop Dolph Lundgren in the trashy, tough guy, drug dealing, sci-fi/thriller bonanza “I Come in Peace”. 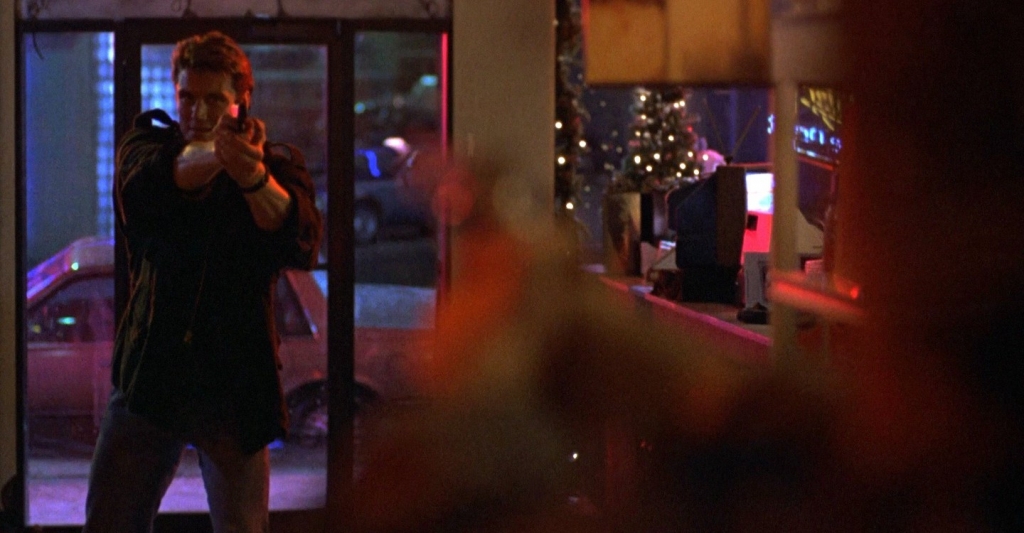 Dolph Lundgren had been living in New York City for just one year in the winter of 1984 when he found himself filming scenes to appear in the next James Bond movie, A View to a Kill. That same year, a writer named Jonathan Tydor wrote a sci-fi/action spec script titled Lethal Contact, and a stunt coordinator named Craig R. Baxley was a first time director for a number of episodes of the hit action TV series, The A-Team.

These three up-and-comers had little in common at the time. But they would all come together five years later over Tydor’s script, when Lundgren became an action star after starring in Rocky IV (1985) as Russian boxer Ivan Drago opposite superstar Sylvester Stallone.

In the Spring of 1988, Craig R. Baxley was enjoying the modest success of his feature film directorial debut, an action/comedy called Action Jackson starring another Rocky alum, Carl Weathers. As a stunt coordinator, Baxley worked on such hit TV shows as Wonder Woman, The Dukes of Hazzard, The A-Team, and the hit 1987 movie Predator starring Arnold Schwarzenegger. So action movies were in his creative wheelhouse. 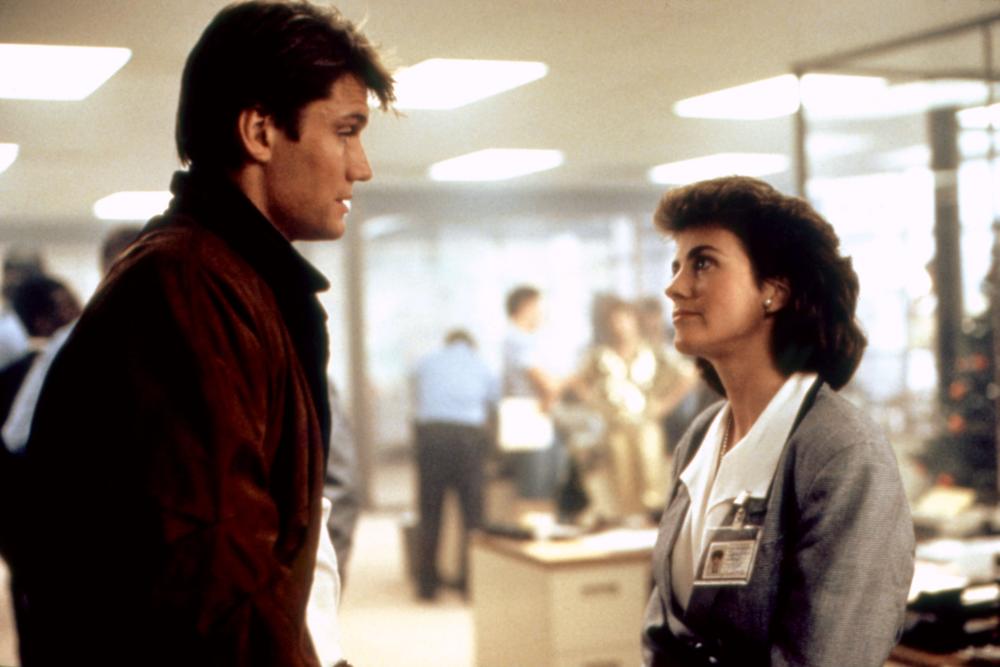 His next directorial effort would be Jonathan Tydor’s Lethal Contact, with a re-write from David Koepp (future Stir of Echoes director, under the name Leonard Maas Jr.), and re-named Dark Angel when production began in Houston, Texas in January of 1989.  Baxley had known and almost worked with Dolph Lundgren prior to signing on to direct Dark Angel.

After Action Jackson in 1988, Baxley was set to direct an action/sci-fi/comedy called Man To Man, about an alien crashing to Earth. Joel Silver of 48 Hours and Lethal Weapon fame was going to produce with Arnold Schwarzenegger set to star as the alien. It would be a big break for Baxley’s career to direct a vehicle starring Arnold, an action star on the brink of global super stardom. Baxley’s timing was a year off, however, because after 1987’s Predator caught fire at the box office, Schwarzenegger became too expensive for the production to afford. Arnold was out, Dolph was in.

Unfortunately, a series of disagreements and creative differences became too much to deal with, and just a few days before the start of production, Man To Man was canceled. Fast forward one year later to Dark Angel. 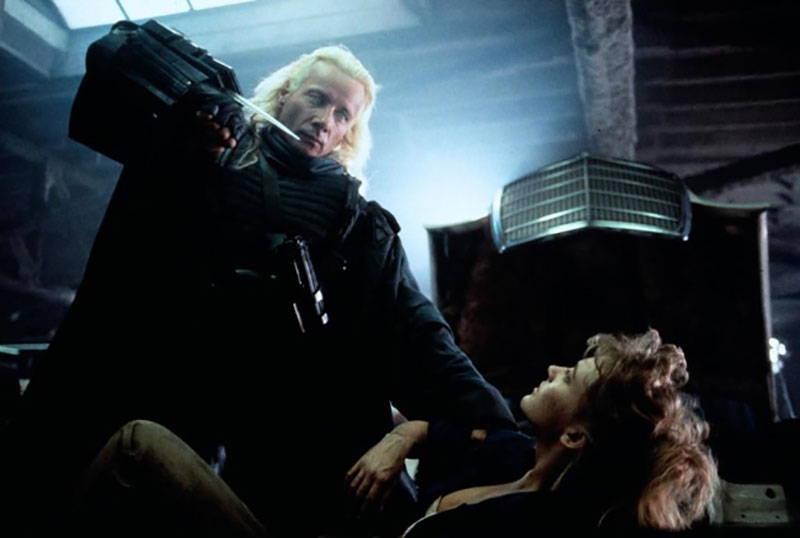 The plot is the stuff of VHS action legend.

Jack Caine (Dolph Lundgren) is a cop with his own set of rules, a tough guy who gets the job done his own way. When his partner dies in a botched drug sting, Caine is forced to work with Agent Smith (Brian Benben), a by-the-book member of the FBI. The two investigate a number of drug related murders and soon discover the suspect is not of this world.

“Who’s that guy,” Caine is asked later in the film. “Some asshole from outer space,” he replies. ‘Nuff said.

Caine is an ‘act now, ask questions later (maybe)’ kind of guy. Ask him, “Where do you think you’re going,” and you’ll get a punch or roundhouse kick to the face. (One such roundhouse apparently connected with an actor during filming when he missed his mark, knocking him out cold.) Pull a gun on someone Caine likes and you’ll get a bullet to the head, as was the case when he saved Agent Smith’s life.

“Caine manual: never trust anyone, page one, chapter one,” he explains.

The film, for some reason, takes place during Christmas time. 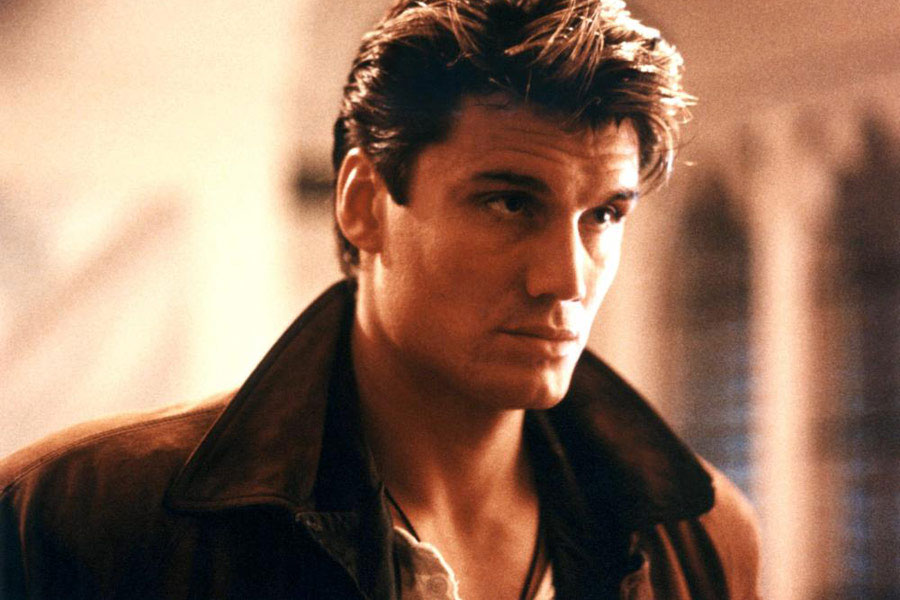 And while Jack Caine may not be Santa Claus, with initials like JC, he may be the savior that all mankind needs against this intergalactic, drug dealing alien threat.

Lundgren was born for roles like this. He’s having fun, and you can tell. And if Lundgren is having fun, the viewer is having fun watching him. After all, with Dolph on screen in a movie with more explosions than a 4th of July fireworks display, while a giant, maniacal drug-dealing alien runs around violently murdering people, how can you not have fun?

And if you’re looking for a scene where our stoic hero looks at a picture of him and his ex while enjoying an alcoholic beverage after a long day, then stops by her place where she slaps him, which leads to them kissing and ultimately a roll in the hay (assumed) as the scene fades out, yeah, it has that too.

Dark Angel is full of tough guy cops trying to one up each other at smoky crime scenes, tough guy cops arguing back at the precinct, and tough guy cops wreaking havoc on downtown traffic as they haphazardly attempt to outrun the bad guys chasing and shooting at them. 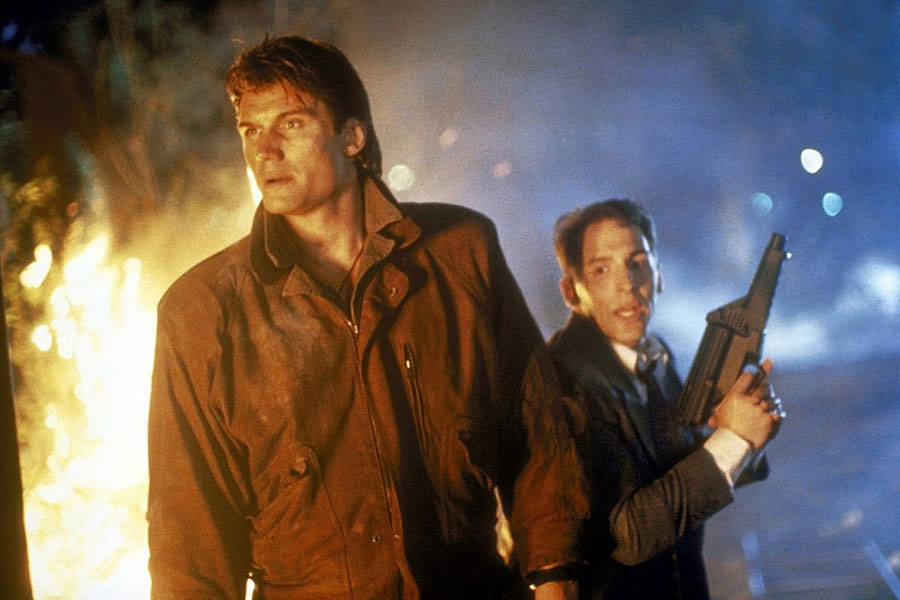 It’s a tough guy kind of movie, and it makes sure the viewer knows it by offering cartoon like action and comic book storytelling that borders on satire.

It’s comical where the camera is often placed during the scenes with Caine and his hot-shot, know everything, federally appointed new partner, Agent Smith. The camera is over Lundgren’s shoulder looking down on Smith, shrinking him to a whipper-snapper like character. Conversely, the camera is placed over Benben’s shoulder as well, looking up at Lundgren’s Jack Caine. He’s a tall mother fucker, and he’s the hero of the story, just so you know.

The bad alien, played by Matthias Hues, is even taller than Dolph Lundgren. Coming in at 6’5”, Hues had to perform a lot of his own stunts because a stunt man of his size couldn’t be found. With his long platinum blonde hair, milky eyes, and menacing whisper when he says “I come in peace,” (a tone that suggests anything other than coming in peace), the bad alien spends the movie snarling and roaring like Bob from Twin Peaks.

Add in his razor sharp, saw-like disc that flies around the room, kind of like that sphere in Phantasm (1979), taking out everyone in bloody, throat-slitting fashion, and the bad alien is an intimidating figure, especially when he runs all wobbly like Freddy Krueger in A Nightmare on Elm Street (1984), with his trench coat billowing behind him.

And yes, he is billed simply as ‘bad alien’ in the credits. 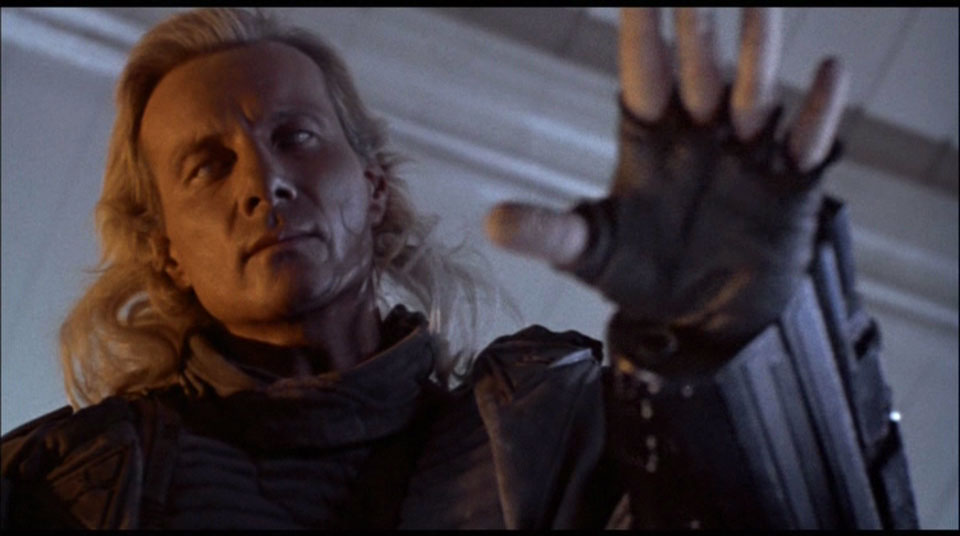 At the end of the film we’re left with a set up for a potential sequel.

It’s a real wink-wink moment that comes across as a joke, but one I’m sure the producers were crossing their fingers for, hoping it could be a real possibility. Dolph kicking more ass with his new sidekick Agent Smith in Dark Angel 2? As the rock song “Touch Me Tonight” by Shooting Star (the band’s biggest hit, reaching number 67 on the Billboard Top 100 in 1989), plays over the end credits, a sequel seems like a glorious, straight to VHS, fun idea, and it actually almost happened.

In the mid 90s, a sequel was written by Harv Zimmel, a writer whose credits included an episode of MacGyver and a film called Shoot to Kill (1988) starring Sydney Poitier and Tom Berenger. The script didn’t feature any of the original Dark Angel characters and focused on a new male detective who teams up with a female agent, investigating mysterious disappearances. Little does the detective know that his new female partner is (wait for it…) an alien! But that’s not all, she’s an alien hunting the other alien responsible for the disappearances.

Baxley was approached to direct the sequel but turned it down because the budget was reportedly only $3 million dollars, less than half the budget of the original. As they say, sequels have to be bigger and better.