“Video Rewind” tells the BTS stories of VHS faves, one rental at a time! Press play and adjust your tracking for “Kull the Conqueror” (1997). 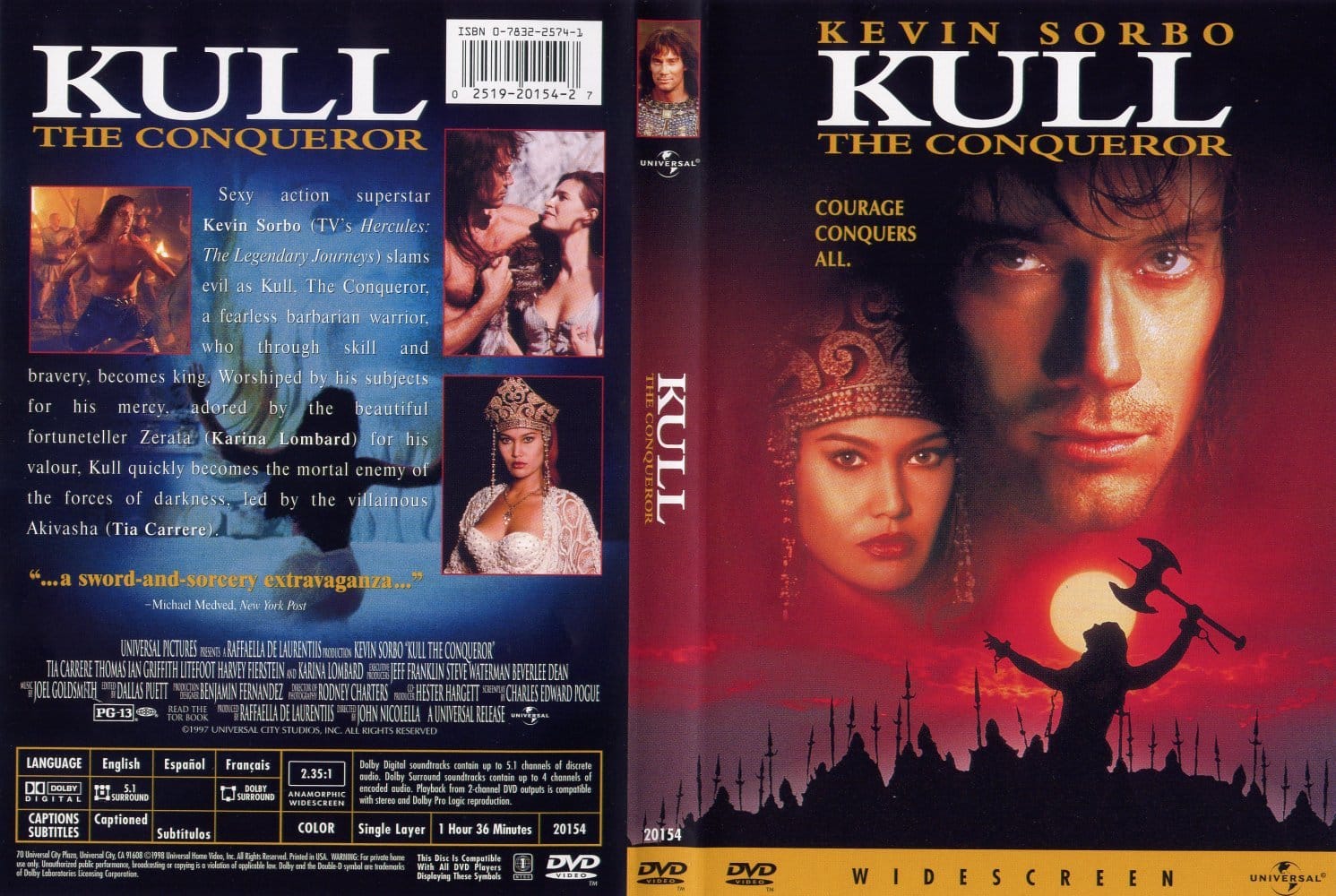 In the early 1990s, Kevin Sorbo was a thirtysomething actor trying to make it in Hollywood. Modeling for print ads, appearing in over 150 commercials, and having guest spots on shows such as Murder, She Wrote and The Commish, Sorbo was still searching for his big break.

In 1993, he learned of a new adventure-drama series being filmed for ABC, and, figuring he had the proper build and look for the part, decided to audition. The show had tremendous promise and the part was highly sought after, bringing in hundreds of actors auditioning for the role. Sorbo learned it was between him and one other actor, and he soon received a call from his agent. He got the part. Kevin Sorbo would be the new face of Clark Kent/Superman in Lois & Clark: The New Adventures of Superman.

Sorbo finally had his big break and was ecstatic about the possibilities the role would afford not only his career but his life. The role, however, was short-lived. One day after receiving the good news, Sorbo got another call from his agent. The producers changed their minds and decided to go with the other guy, Dean Cain (originally deemed too young-looking). Sorbo was crushed. Such are the ups and downs of working in show business.

Three months later another role presented itself, this time from USA Network. Again having the build and look for the part, Sorbo auditioned. He again received a call from his agent. He got the part. Kevin Sorbo would be the new face of Hercules in Hercules: The Legendary Journeys.

As Lois & Clark was halfway through its final season in late 1996, Hercules took the title from Baywatch as the most-watched show in the world.

Sorbo was enjoying major success and had become instantly recognizable the world over.

A move to the big screen was an inevitable next step in his career. Little did Sorbo know, his audition for Hercules not only won him that role but was key in winning his first feature film.

“Before I left Hollywood for Bratislava [Slovakia] to make DragonHeart,” said producer Raffaella De Laurentiis (Conan the Barbarian), “I saw Kevin’s audition videotape for Hercules and he made an instant impression on me.”

Having produced Conan and its 1984 sequel, Conan the Destroyer, De Laurentiis was instrumental in catapulting Arnold Schwarzenegger into the superstar he would become when he was cast in the lead role. In the early 1990s, De Laurentiis wanted to produce a third Conan film. The script, written by Charles Edward Pogue, focused on an older Conan, now king, who must stave off a rebel uprising to overthrow him by resurrecting an ancient, evil sorcerer.

De Laurentiis said that Arnold was interested in the film for a while, but ultimately decided he wasn’t ready “at the time to do another Conan picture and run around in a loincloth.”

“We knew going in we might not get Arnold and would switch over to Kull,” said screenwriter Charles Edward Pogue.

Kull of Atlantis first appeared in a story called “The Shadow Kingdom,” published in a 1929 edition of Weird Tales. Kull was the creation of Conan creator Robert E. Howard and the two characters occupied similar territory. Regarding the characters of Kull and Conan, Pogue added, “there was existing material that paralleled each character…So it was a fairly easy transition without exiting the plot and story of the script.”

Kevin Hooks, who found success with Passenger 57 in 1992, was brought on as director.

He and producer Raffaella De Laurentiis along with Universal started a worldwide campaign to find the actor who would play Kull. The search was massive, receiving tapes from Europe, the United States, and even Australia. In these tapes was a promising audition from an actor named Thomas Ian Griffith, but the producers weren’t sold on the actor for the lead role (he ultimately landed the role of the villainous General Taligaro).

Five months into the search and the actor for Kull still hadn’t been found.

By this time, in July of 1994, producer De Laurentiis was off to Slovakia to film DragonHeart, and the search was put on hold. It wasn’t until February of 1995 that Kevin Sorbo did a screen test for Kull.

“I saw immediately that he brought a fresh, younger approach to the role,” said De Laurentiis. At 6’3” and 215 pounds, not only did Sorbo have the look needed for the character, but with Hercules: The Legendary Journeys climbing the TV rankings, it was an enticing idea to have a rising star in the lead role.

However, between Sorbo’s Hercules schedule and with De Laurentiis working post-production on DragonHeart as well as leaving to film Daylight with Sylvester Stallone, production on Kull the Conqueror would have to wait another year.

The deal with Sorbo wasn’t finalized until February of 1996.

“I’ve always liked the Fantasy/Sci Fi genre,” said Sorbo. “I grew up watching STAR TREK OUTER LIMITS, and the reruns with Steve Reeves as Hercules.” Regarding his decision to sign on to play Kull, Sorbo said, “I took the role because it was the best of three scripts. It was the most complete project that was there in front of me.”

Meanwhile, due to the constant delays, director Kevin Hooks left the Kull project around mid-1995 to direct Laurence Fishburne and Stephen Baldwin in Fled. Kull may have found its star, but now the search was on for a director. Thankfully, it wouldn’t take nearly as long to find a director as it did to find Sorbo.

“I didn’t have the time to bond with an unfamiliar director,” said De Laurentiis, “so, I went with John Nicolella.”

De Laurentiis had worked previously with Nicolella in 1994 on Vanishing Son, an action-adventure TV mini-series that showed Nicolella was familiar with the genre and ready to handle the material in Kull. Nicolella previously served as producer on iconic ’80s TV show Miami Vice, and another Don Johnson show in the ’90s called Nash Bridges. In a prophetic coincidence, it was Nicolella who shot Sorbo’s screen test for Kull.

With cast and crew in place, Universal (the studio behind both Kull and Hercules), granted Sorbo four months off from his Hercules duties instead of the usual two to ensure Kull had proper time