Join legendary Lo Pan at “THE VINEYARD” for a night on a beautiful island, wine, sacrifices, and zombies looking for revenge in this Blu-ray gem.

In a 2017 issue of Food & Wine magazine, writer Justine Sterling described James Hong’s THE VINEYARD as the “greatest wine-centric B horror film.” In 2019, Vinegar Syndrome is giving THE VINEYARD its Blu-ray debut. Let’s find out if THE VINEYARD lives up to Ms. Sterling’s lofty assessment. 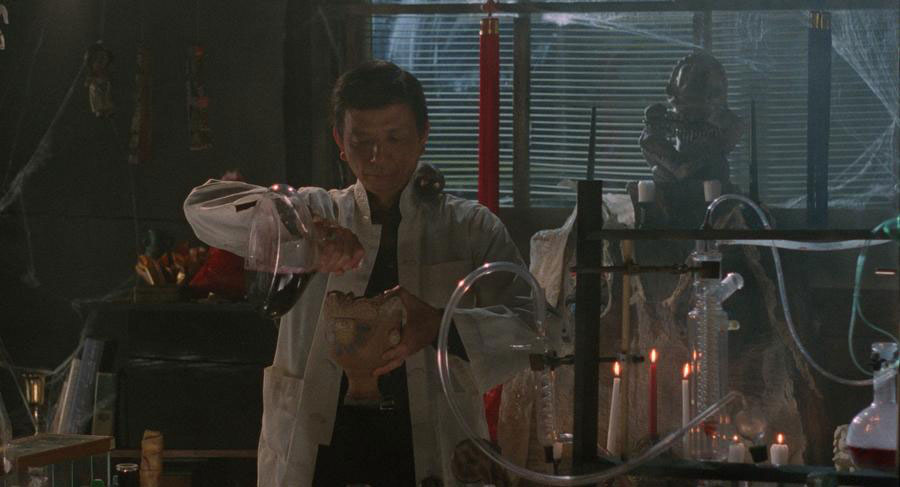 Writer/Director of THE VINEYARD, James Hong, is well known to genre fans for his work as an actor, especially as the evil Lo Pan in John Carpenter’s BIG TROUBLE IN LITTLE CHINA. So, I was surprised to see that Hong had a hand in writing the story for THE VINEYARD as well as directing the movie. A quick look on IMDB shows that Hong has a small handful of directing credits, mostly with the kind of straight-to-video softcore eroticism one used to find on Showtime or Cinemax (or, as it was dubbed by fans, “Skinemax”).

Hong stars as the wealthy, wine-making scientist Dr. Elson Po. He has become famous for his exquisite and expensive wines. What fans of his tasty delicacy are unaware of is that he also uses the wine as part of a potion that grants him long life.

In Po’s wine cellar he keeps a flock of young, beautiful, mostly women chained up, so he can drain them of their blood for his elixir. Once his victims have been used up, he dumps them in the ground in his vineyard. A side effect of the wine and the burial area is that the victims turn into zombies. Po uses mystical powers granted to him by a Mayan god along with sanctified dirt to keep the zombies in the ground. 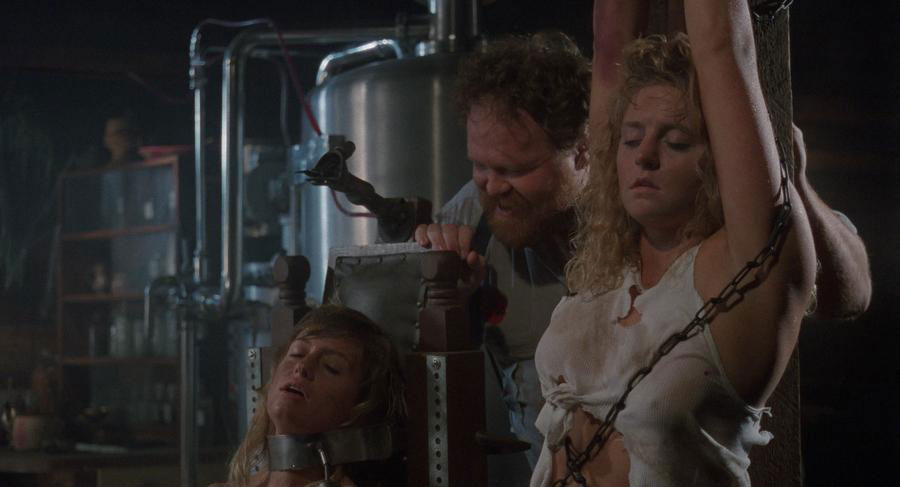 Po finds that the elixir of long life is beginning to lose its effectiveness, and his youth and vigor is disappearing, causing him to turn into the old, decrepit, centuries-old man that he is. Po plots to bring new blood to his island vineyard using his connections in the movie business to lure young actors under the guise of making a movie about wine making.

Upon arrival, Po fixates on young starlet wannabe Jezebel (Karen Witter) and determines that she may be the key to his elixir. Po plots to marry her as quickly as possible, while also planning to eliminate her friends with the help of his henchman Warrior (producer Harry Mok). While all this is happening, the zombies in the vineyard are becoming restless and hard to keep under the dirt. 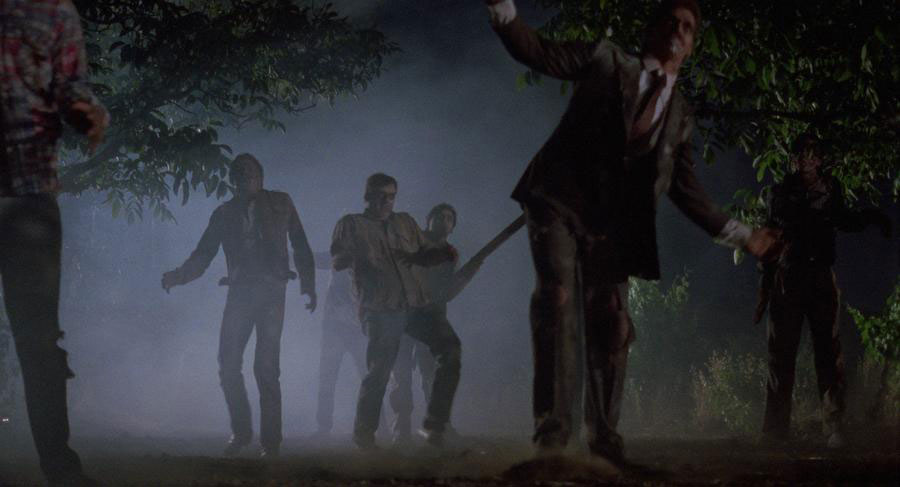 THE VINEYARD starts off like a softcore T&A, straight-to-video movie.

As with many horror movies from the 1980s, THE VINEYARD has an uncomfortably weird dance segment in the middle with some painfully awkward dancing that doesn’t quite match the music playing. Most of the dance segment is focused on Po dancing in a costume, and it’s a mix of hoping it’s over soon and enjoying the humorous physical comedy of Hong in that scene. 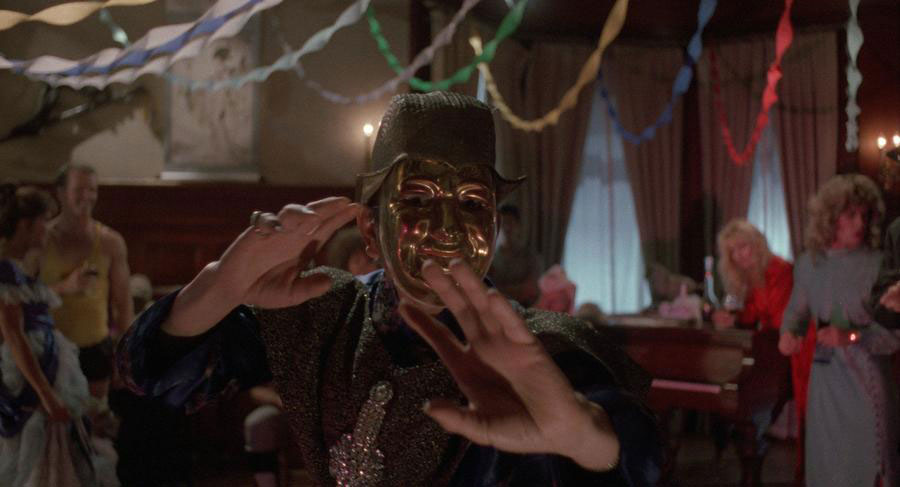 While the story is lacking, the special effects and makeup are a standout.

The zombie makeup, while not gory, is exceptional. The zombies aren’t scary per se, and mostly come across as zombies who had stumbled over from the set of Michael Jackson’s “Thriller” video shoot. There’s a fair amount of violence, including a sweet beheading scene, and some martial arts fights that are choreographed well, but the fighters don’t seem too well versed in actual fighting. This makes sense when it’s revealed in the interview segments that there were no stunt performers, and the actors performed their own fight scenes.

Overall, THE VINEYARD is a well-made, solid, fun horror movie. Though the movie had plenty of faults, I couldn’t help but fall in love with how sincerely all the disparate parts of the movie came together. Is it a comedy, a tragic love story, a zombie apocalypse, a mystical adventure? 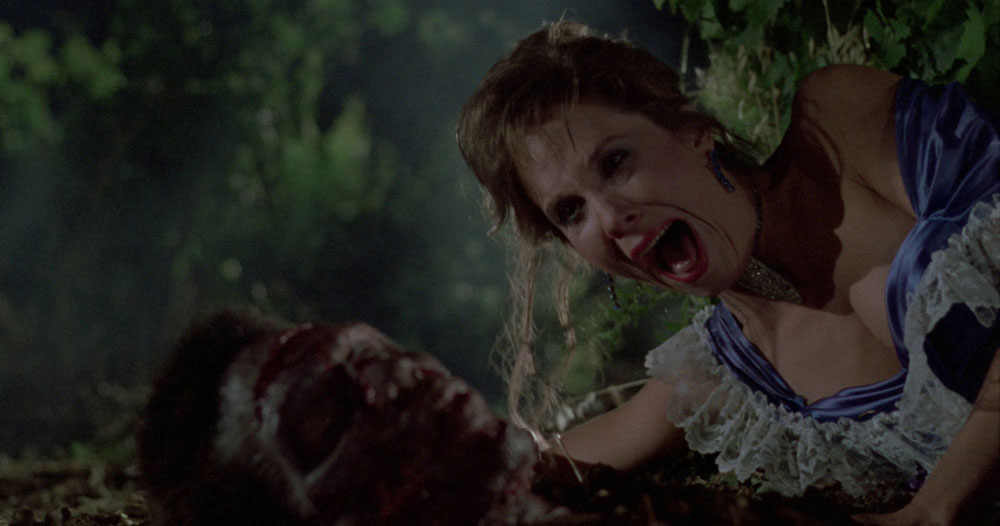 It’s all those intertwined in a lovable mess of a movie that may be, as Food & Wine claimed, the greatest wine-centric horror film ever made.

James Hong shows a knack for horror direction, and it saddens me that he never returned to the genre as a director. Hong, with his decades of industry knowledge and skill, could absolutely create an unforgettable horror film. 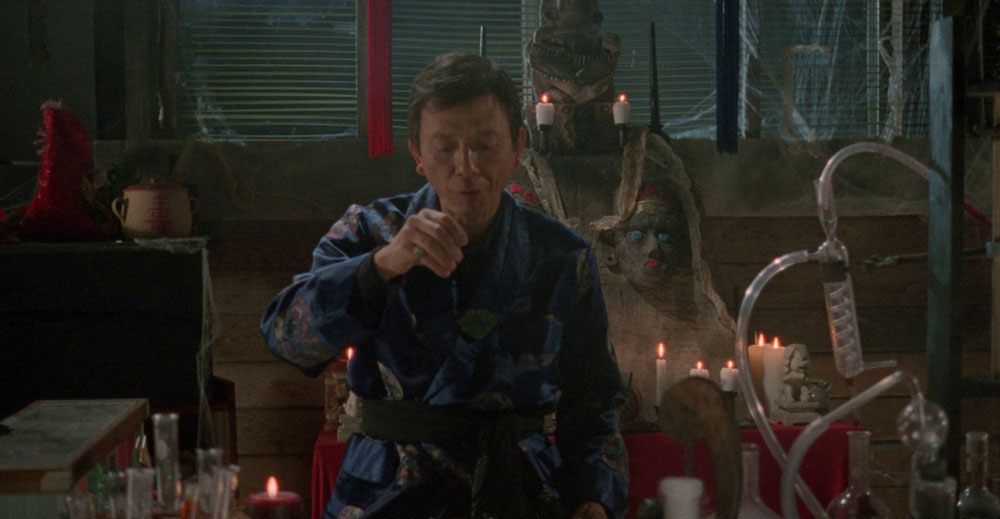 The picture, as is the case with most of the Vinegar Syndrome restorations, looks immaculate, and even the theatrical trailer seems to have been remastered. The pristine look of the film allows the makeup and special effects work to shine. For a low-budget indie film, THE VINEYARD looks fantastic.

What’s missing is a feature that compares how the film looked before the restoration. Usually the included trailer on these restored movies can give some idea what condition the film might have been in before restoration, but in this instance, the trailer looks just as good as the film. 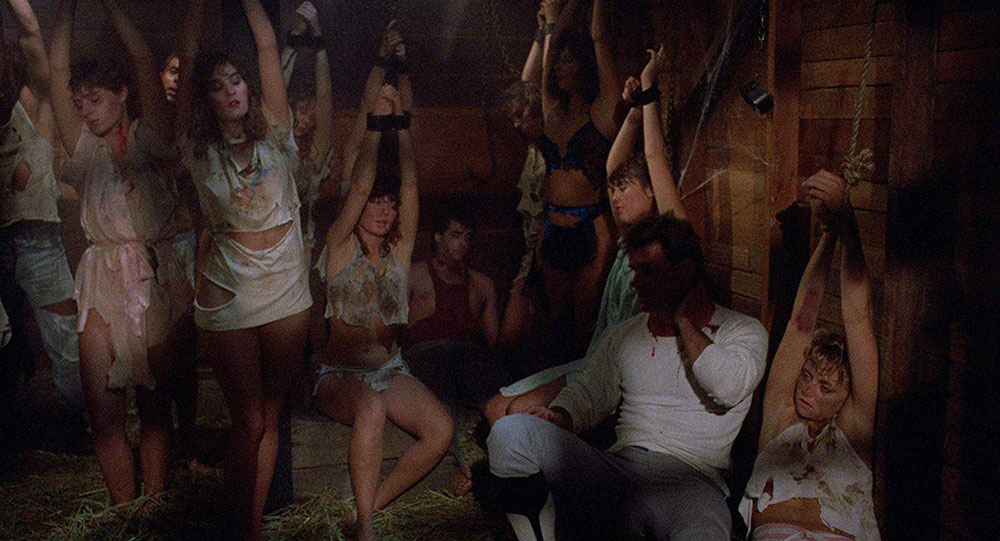 The James Hong and Harry Mok interview delves into how difficult it was in the 1980s to find funding for a film starring an Asian actor in the lead role. Hong and Mok remark that by deciding to make a horror film, it helped get them some of the funding they needed to make THE VINEYARD. The highlight of this interview segment is watching James Hong mimic kung-fu moves.

The interviews with William Rice and John Dirlam go into more technical aspects of making THE VINEYARD, but also discuss breaking into the industry and what it was like working with James Hong. Both have fond memories of making THE VINEYARD (a 21-day shoot) and describe the difficulties and the fun in making an indie horror movie. 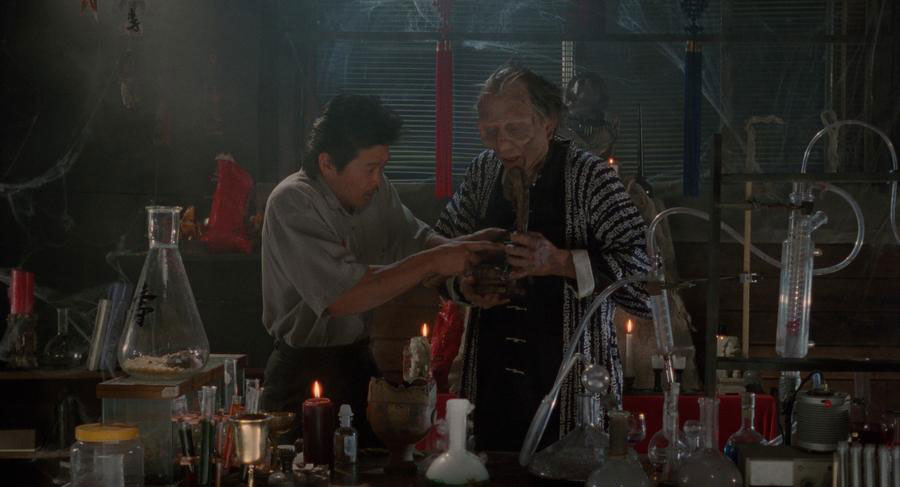 THE VINEYARD, with its T&A mixed with horror elements, should have been a mainstay movie on USA’s Up All Night program in the 1990s. The movie itself is a fun flick that should inspire a drinking game (take a drink whenever a character mispronounces “amulet”).

The disc’s interview features are interesting, and at approximately 15 minutes each hit the sweet spot, for me, on interview lengths. It is missing and would have benefited from a James Hong commentary track. Hong, in his interview, is personable and hilarious, and I would have loved to hear more of his memories of THE VINEYARD on a commentary track. The most glaring omission in the bonus features is a short example of what Vinegar Syndrome had to work with when restoring the film. Many films like THE VINEYARD are scanned and restored in 4k, and it’s interesting to see what the source material looked like before the restoration.

These small issues aside, Vinegar Syndrome has produced another fantastic Blu-ray release with THE VINEYARD. I didn’t know I needed a movie like this in my life until I hit play on the Blu-ray player, but now that I have, I’m ecstatic to have experienced THE VINEYARD.

For more information and to purchase THE VINEYARD, visit Vinegar Syndrome here.